Watford were defeated 3-2 by Arsenal in a high-paced encounter at Vicarage Road.

The visitors went ahead within five minutes through Martin Ødegaard, before Cucho Hernández's bicycle kick brought Watford back on level terms.

Bukayo Saka's effort made it 2-1 to Arsenal, and Gabriel Martinelli made it three early in the second half. Moussa Sissoko's second consecutive home goal halved the deficit late on, but it wasn't to be for Roy Hodgson's side.

It took 56 minutes for the deadlock to be broken at the Emirates Stadium earlier this season, but the net was bulging after just 16 seconds at Vicarage Road. Emmanuel Dennis penetrated the Arsenal backline and slotted past Aaron Ramsdale, only to be denied by the assistant referee’s offside flag. 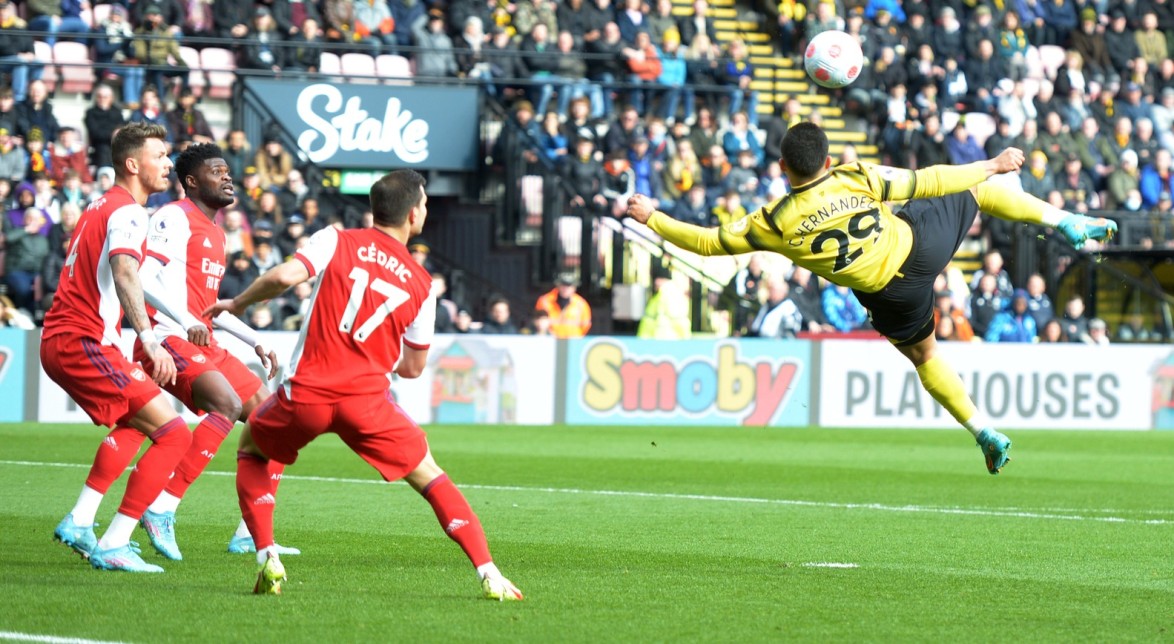 The Hornets were caught out four minutes later. Ødegaard breached the Watford defence, tucking his effort into the far corner to earn the visitors an early lead.

The Gunners continued to threaten with half-chances before the Golden Boys responded in style. Dennis cleverly laid the ball off to an overlapping Kiko Femenía on the right flank with numbers in the box. The Spaniard’s excellent cross found Hernández, starting his first game since October, as he was lining up an overhead kick, a sublime strike which sailed in to even the score.

From there, Watford continued with the momentum until the half-hour mark and could have gone ahead. Sissoko had a chance from outside the box that lifted over the bar, and Dennis forced a save from Ramsdale that had to be scrambled away. 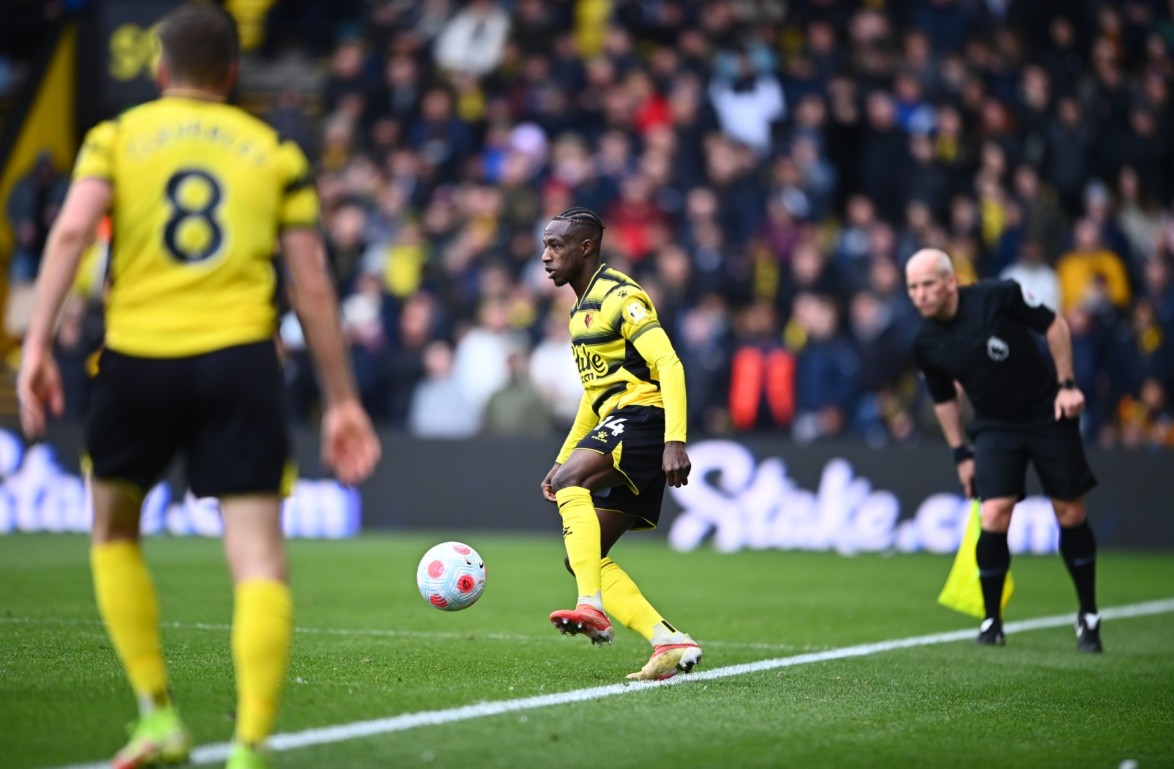 A creative piece of attacking play gave Arsenal the advantage for the second time on the day, thanks to link-up between Alexandre Lacazette and Saka. The England international exchanged a one-two with the visitors’ frontman, wrong-footing Ben Foster with the finish to make it 2-1.

The Watford back four continued to be tested for the rest of the first 45. Hassane Kamara slid perfectly to steal possession from Cedric Soares as the full-back readied a cross, and Craig Cathcart blocked a shot from range minutes later. Gabriel also rose highest to meet a long cross just before the break, but couldn’t angle it under the crossbar.

Despite the scoreline, the Hornets started the second period in the ascendency, with most of the action in Arsenal’s defensive third. It was slightly against the run of play when Arsenal added to their advantage after 51 minutes. A misplaced pass out of bounds allowed Saka to throw quickly to a charging Soares. Ødegaard's flick reached Lacazette who teed up Martinelli on the edge of the box, and the Brazilian lashed home powerfully. 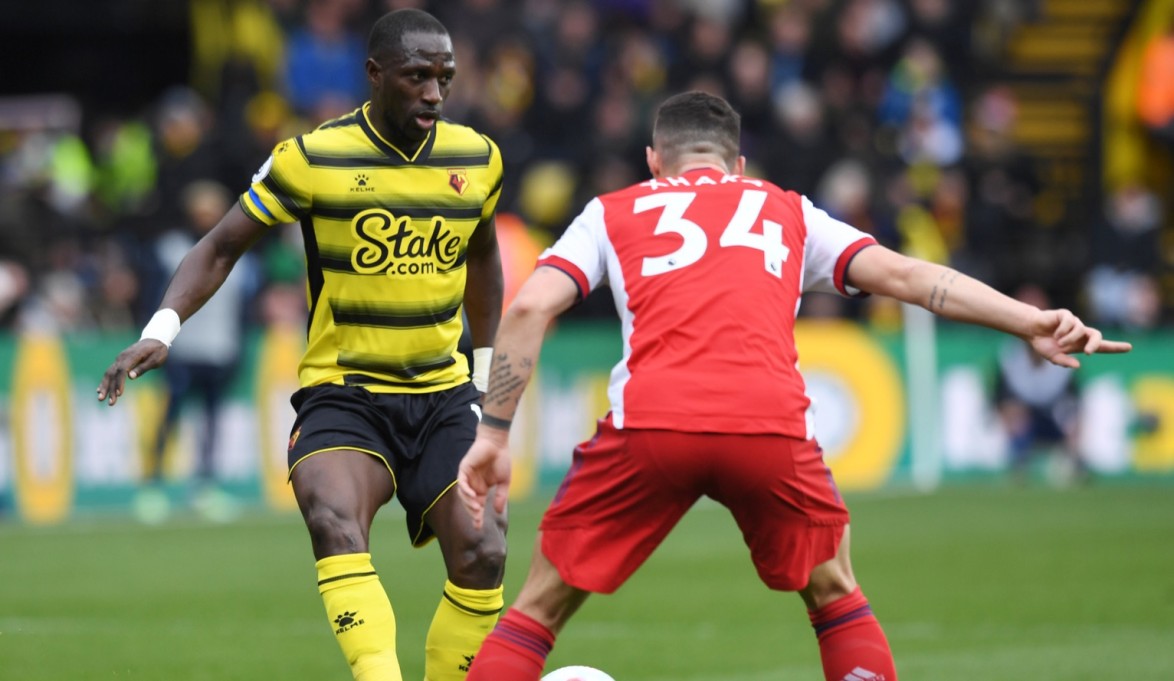 Watford’s high press came close again to catching out the away side after the goal. João Pedro intercepted a low cross, playing in Dennis inside the box. The Nigerian’s flick landed at Tom Cleverley’s feet, whose shot couldn’t ripple the net.

Dennis had a vital chance to halve the deficit 20 minutes from time but couldn’t connect with the low ball. Femenía again drilled a delivery across goal, but the striker mistimed his effort.

After a dominant spell by the Gunners, Watford pulled a goal back. Sissoko, who had pressed tirelessly throughout, made a well-timed run in behind, poking a shot under the Arsenal goalkeeper to reduce arrears.

Debutant Samuel Kalu tested Ramsdale in added time as Watford fought for an equaliser, but the referee's whistle confirmed defeat for the hosts, who will look to bounce back against Wolverhampton Wanderers on Thursday night at Molineux.