Sir Elton John: “My Passion For This Club Has Never Died”

Watford FC’s Honorary Life-President, Sir Elton John CBE, is thoroughly impressed with the team’s immediate return to the Premier League as well as the transformation of the club into one which he believes truly belongs among the elite.

The former owner and global music megastar attended Vicarage Road on Saturday to present Ismaïla Sarr with the coveted Graham Taylor Player of the Season trophy, also taking in the final match of the 2020/21 campaign against Swansea City.

“It’s a whole different club,” he said in an interview which first aired on our End of Season Awards Show. “You come in and this is a proper Premier League club. [Gino] Pozzo has done an incredible job and Scott [Duxbury] has been amazing – I talk to him at least two or three times a week, which he probably hates, especially when we lose!

“Last year, we didn’t really deserve to go down, we had a bit of an unlucky run at the end of the season, but to come straight back up again from this division is really very hard. We always had the squad of players, but it’s a different ball game, the Championship to the Premier League. 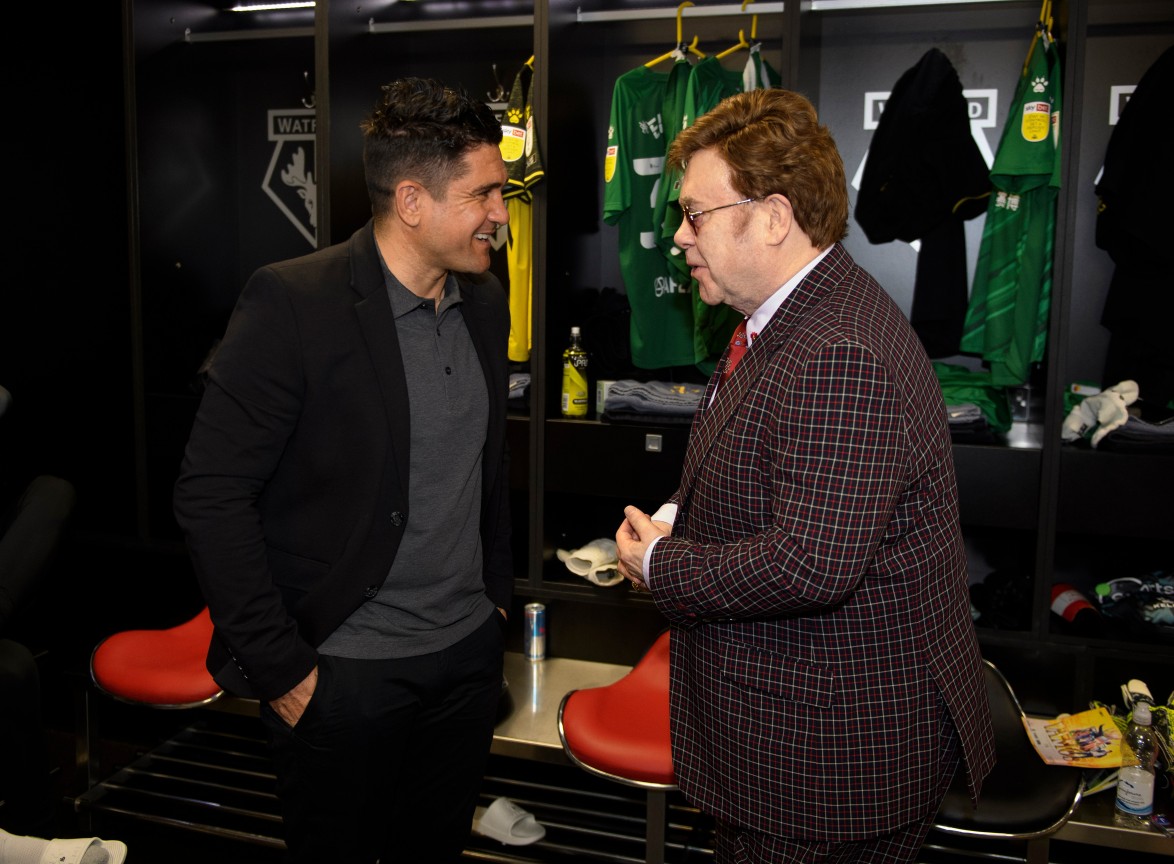 Like all supporters, Sir Elton has been following the season on Hive Live through all the highs and lows, twists and turns. He admits it’s not always been plain sailing, but it never is in this division and the ultimate success is a credit to the group’s attitude.

“I’ve managed to watch lots of games live,” said Sir Elton. “Midweek and Saturdays, I dread them, because usually we’ve got a game! It’s a nightmare watching the results every week because there’s some good teams in this division, as everyone knows. Everyone wants to get out of the division and get into the Premier League.

“What can I say? It’s in my heart, in my soul, you can’t get rid of it. My passion for this club has never died and I’m so proud of this club. This season is an amazing achievement. At one point we looked as though we were just going to qualify with the play-offs and then we had this incredible run and we sealed it with the win against Millwall. I’m delighted, I’m so happy.” 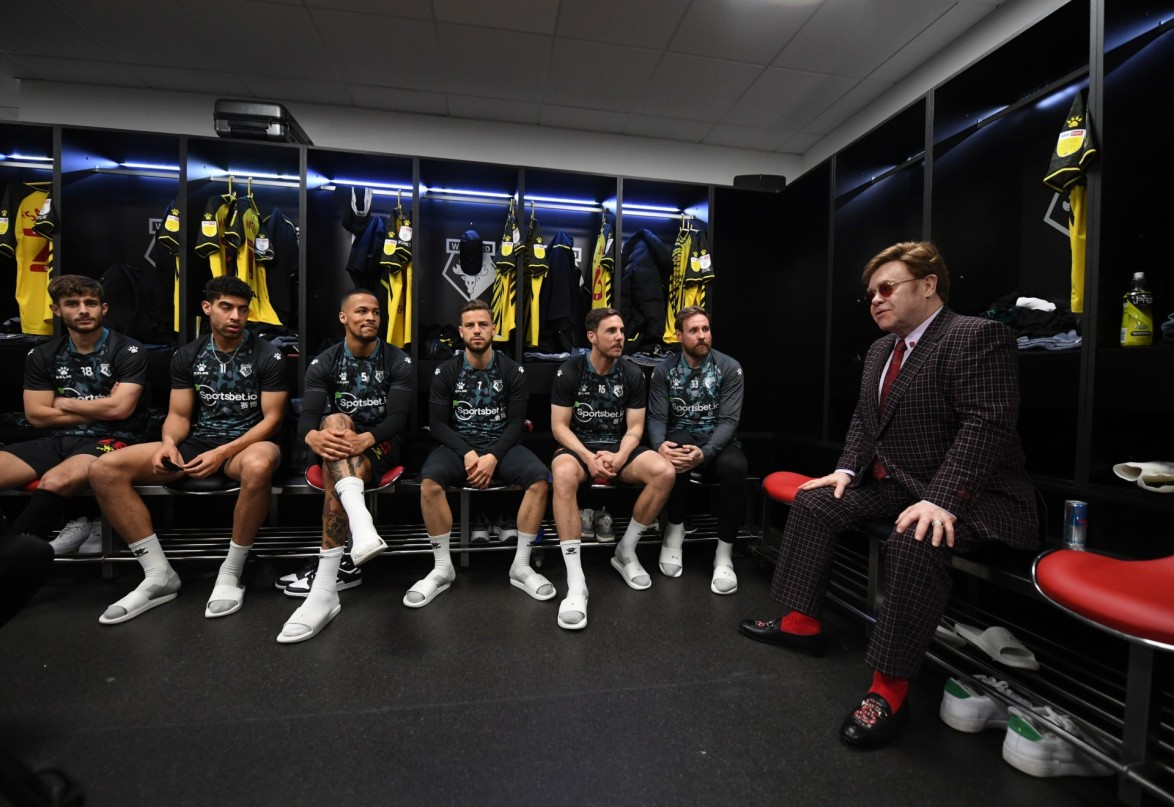 The club would not be where it is today were it not for the achievements of Sir Elton and the late Graham Taylor OBE, who took Watford from the lower divisions to the top during a miraculous rise in the late 1970s and early 1980s, building the foundations for this present success.

The pair were also instrumental in pioneering the community ethos which remains at the forefront of Watford’s priorities, with the current ownership ensuring we continue their legacy as the original family club.

“I’ve seen a lot of football at this club, ever since I was five years old, and we played in blue and there were two of the old stands,” said Sir Elton, who was born in Pinner and also lived in Croxley Green before rising to global stardom.

“From when I first came in here as vice-president [in 1973], to see us now, we took it on an amazing journey. I’m so proud, considering where we came from, what this club was, what it means to the community. That was Graham’s passion, and we carried that on during Covid with the hospital next door. It’s been an amazing trip.” 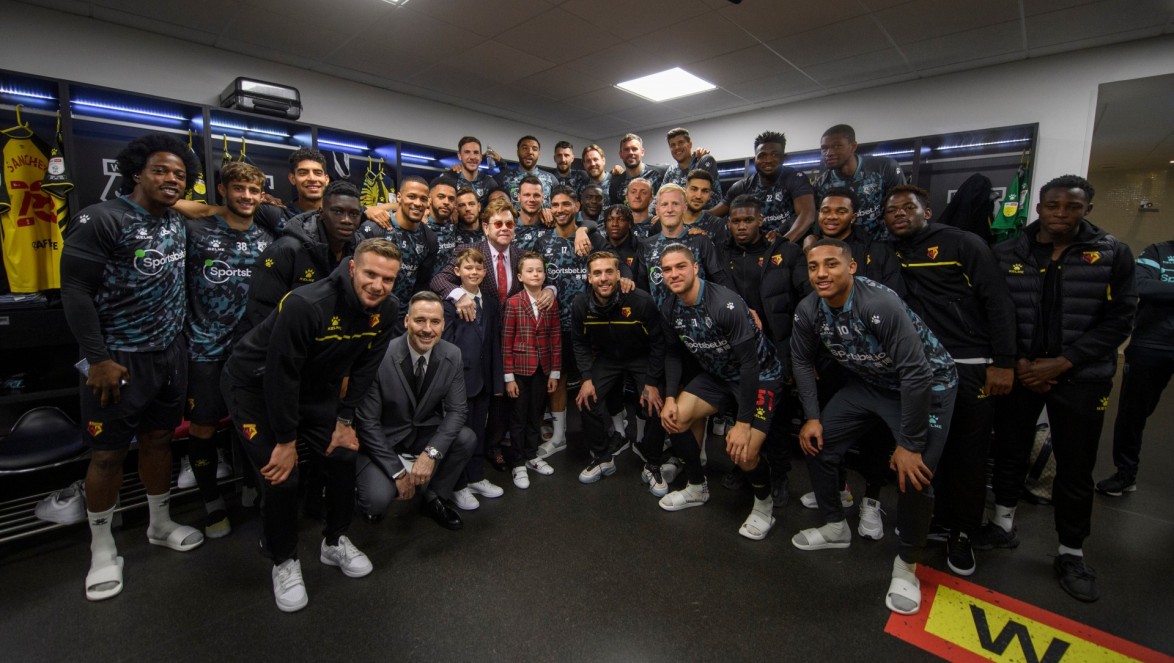 With supporters in mind, Sir Elton is looking forward to returning for a full house back in the Premier League next year, understanding how important watching their team regularly is to the Hornets faithful, for more than just the on-pitch action.

“The supporters of this club have always been in my heart,” he said. “I love them dearly and it must have been so frustrating for them to watch from afar, as it has been for every football supporter this year. The players have really done brilliantly without this home support and I think next year, when we have the home support, they’ll do even better.

“I’m dying to come back next year, with the fans in the ground and the atmosphere – ‘Come on you ‘Orns’, see all the flags and the scarves. Who wouldn’t want to see that? We all miss it so much. We miss the crowds, we miss going to the movies, we miss going to rock concerts, going to the theatre, or just going out to a meal. We’re all human, we miss that contact.”