We Campaign: Watford FC Continues Fight Against Discrimination and Abuse 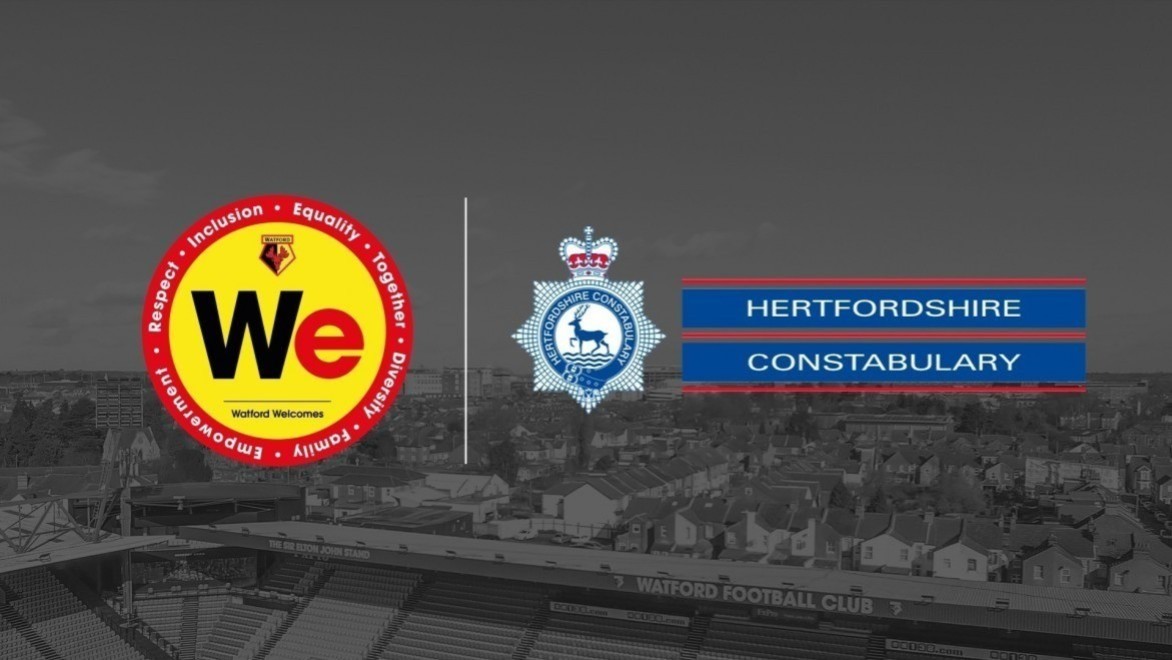 Watford FC is proud to continue the We campaign into its fourth season, working with the hate crime unit at Herts Police to encourage inclusivity and tackle discrimination and abuse directly.

Actions speak louder than words, and the issue of discrimination and abuse in football is something that should and will remain in sharp focus. The We campaign has provided a clearer route for supporters to report incidents, which led to a record number of reports last season. A total of 58 incidents were reported across the season, and we thank those supporters who have used the We campaign to date.

Among the actions taken last season, education and awareness sessions run by the club, and supported by Kick It Out where appropriate, were the most common outcome. Yellow cards were placed on seats to alert supporters that an incident took place, when we were unable to identify any individuals. Away teams were notified when incidents involved their supporters, while stadium bans and behaviour agreements have also been issued. 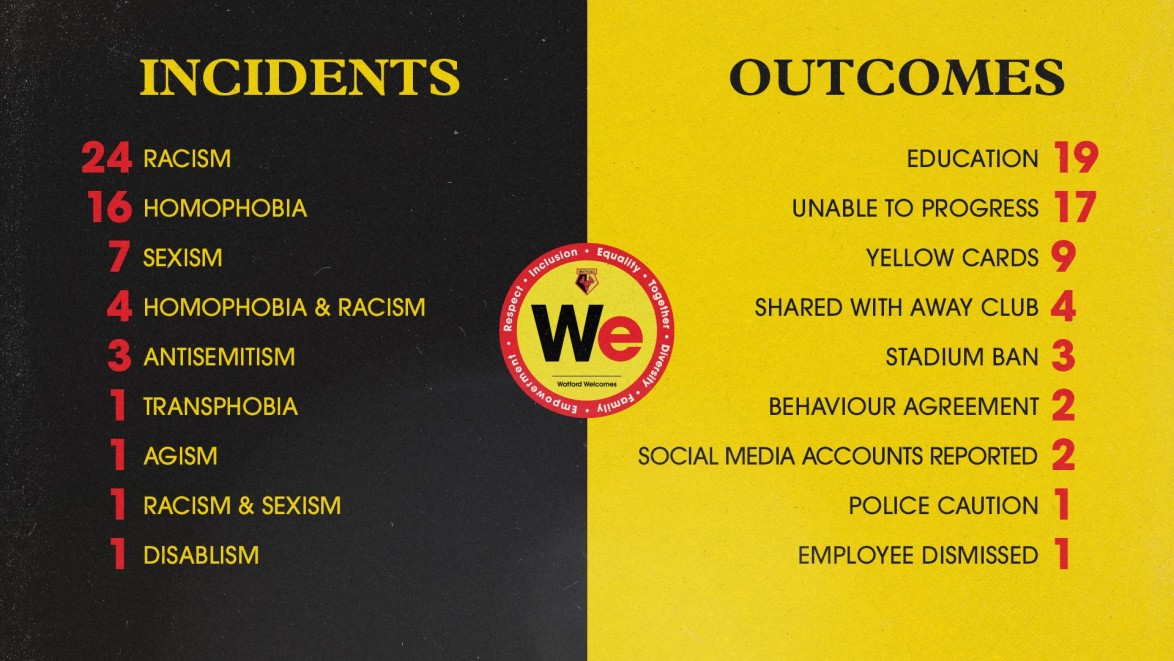 In addition to a stadium ban, one supporter has been given an 18-month community order after appearing in court in connection with a racially aggravated hate crime, which was reported through the We campaign. Perry Eastwood, aged 45 and from Oxhey, appeared at St Albans Crown Court on Tuesday April 19.

Eastwood was refused entry to the ground due to wearing an away team shirt in the home team seating area. When staff spoke to him, he became verbally abusive and threatening towards a member of staff, before making hate comments.

As well as the community order, he was sentenced to 50 hours of unpaid work and 20 days Rehabilitation Activity Requirement (RAR). He was also handed a fine of £500 and ordered to pay victim surcharge costs.

“This is a great example of how effective collaboration can work within our local community,” said Hornets’ Chairman & CEO Scott Duxbury.

“The creation of the club’s ‘We’ campaign was designed to educate and inform as well as remind our supporters we’re committed to making Vicarage Road a welcoming place for everyone.

“We’re grateful to Hertfordshire Constabulary as we’re aware how tough it is to see these incidents through to a conviction.”

Hate Crime Officer Dani Howlett-Bolton, who led the investigation, said: “Firstly I’d like to thank the victim for supporting this investigation and being ready to stand up in court and give their evidence.

“By working with the club, we have been able to support victims and bring offenders to justice. Watford FC has led nationally on hate crime in football, and we’re incredibly grateful for their ongoing support in removing all hate crime from our communities.” 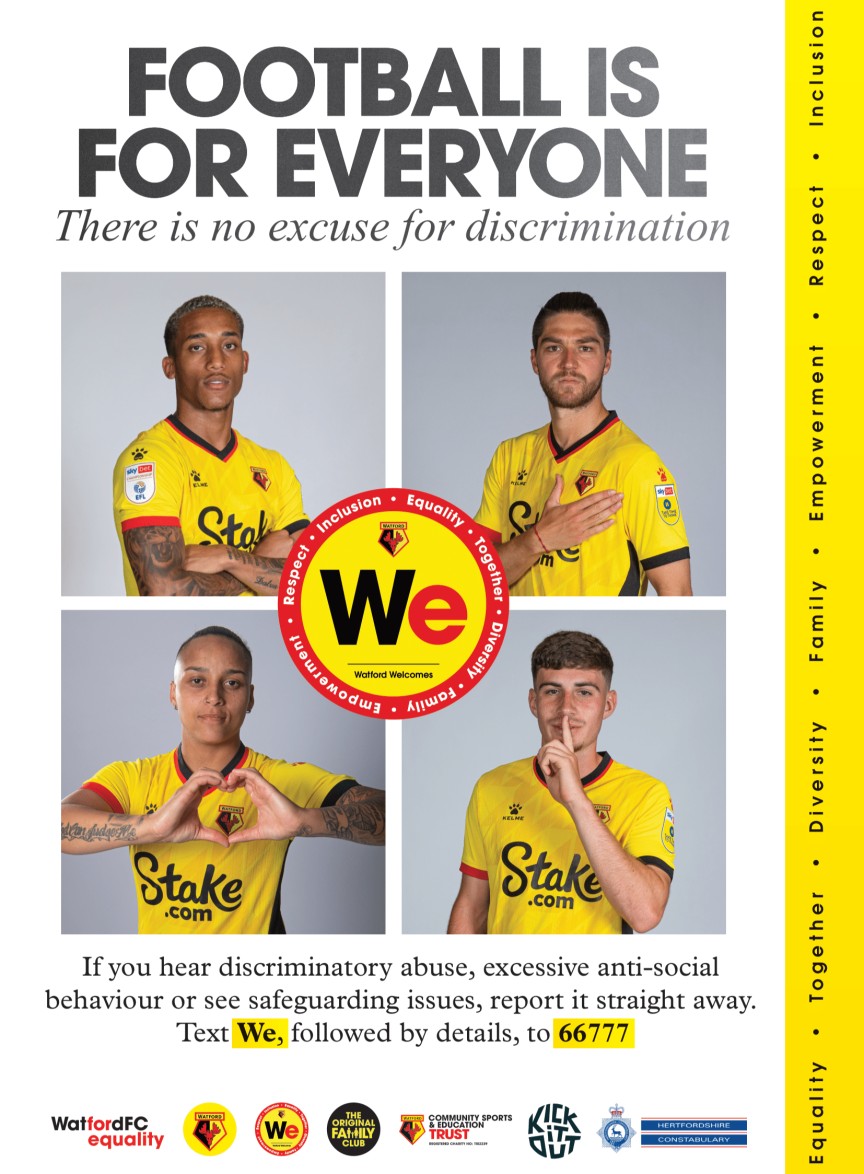 As a result of feedback received from those who made a report during 2021/22, we have changed the number to make it even easier to report discrimination, excessive anti-social behaviour or safeguarding issues.

Please text ‘We’, followed by seat numbers and details, to 66777 straight away. Our team will then investigate and take action accordingly.

The same details will be used at all Watford FC men’s and women’s matches, and Community Trust events, so please work with us to make our stadiums and events enjoyable for all supporters.