We Campaign: Time To Show Your Support 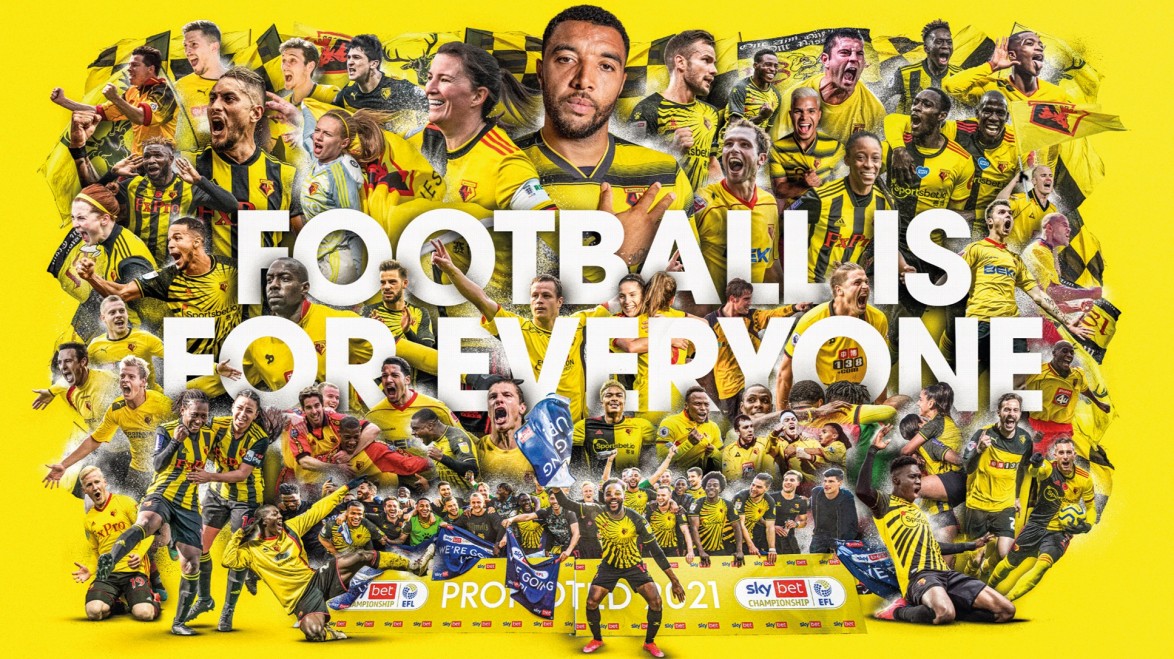 Across the 2020/21 season, Watford FC continued its proud tradition of being at the forefront of football’s campaign to be fully inclusive.

The Hornets were delighted to support Kick It Out’s ‘Take A Stand’ initiative during the season, which is a call to action encouraging people across the football community to take an action or make a pledge in the fight against discrimination. Our pledge was to continue enhancing our We campaign and encourage our supporters and staff to report discrimination and abuse wherever they see it.

The We campaign was launched at the start of the 2019/20 campaign as a result of online racist abuse aimed at our black players following the FA Cup semi-final against Wolves. The campaign provides a clearer route for supporters – and staff from both the club and the Community Sports & Education Trust – to report incidents.

Tom Cleverley and Troy Deeney met with three members of staff from across the club and Trust at the end of last season to discuss the campaign and some of their experiences. Subjects ranged from abuse received by staff during their work, how the team have discussed discrimination and what actions they might take, and players posting on social media.

Their conversations further highlighted the need to keep the We campaign at the heart of our work on EDI (Equality, Diversity & Inclusion) and some powerful clips from those conversations can be heard within this article.

The introduction of the We campaign led to an increase in reports received when compared to 2018/19, from 11 to 20. While the overall number of reports decreased to 12 during 2020/21, mainly as a result of the stadium being closed for all but a handful of games, complaints received relating to social media posts remained at the same level as the previous season, with nine online incidents being reported in total.

Of the 12 incidents reported, all were investigated by club staff and six were reported to – and dealt with – by Herts Police as hate crime. Of those, two supporters went through an educational process which involved in-house meetings using the Watford Welcomes values, which reflect the club’s history and ethos.

One of the incidents is still the subject of an ongoing police enquiry, while an adult caution was also issued to a supporter who was formally interviewed and admitted sending a homophobic tweet during the match at Cardiff City. The supporter has subsequently been banned from attending matches.

Our stance on taking positive action has been recognised by Kick It Out, who have recently invited the club to take part in a pilot scheme aimed at collating reports from across the game, in order to identify trends and provide a more accurate reflection of the number of incidents being reported.

As a new season kicks off with the club back in the Premier League, the focus on Equality, Diversity & Inclusion at Watford Football Club remains as high as it’s always been. As part of this work, we will fully support the players from both our men and women teams, who have decided to continue taking a knee during the upcoming 2021/22 season to highlight their unstinting opposition to racism.

“Everyone is committed to supporting the We Campaign and everything it stands for” said Watford FC Women captain Helen Ward. “We want to eliminate discrimination in all forms and will continue to take the knee before games. We want to bring awareness to social injustices to try and eradicate them for good.”

The actions of our players should not be confused with any political message, nor should they be seen as support for the views and statements of any other individual organisation. We strongly believe that actions speak louder than words and the number of reports received are a positive reflection of the processes we have put in place.

We continue to encourage incidents to be reported to us, preferably in real-time by using #buzzoff online, sending an SMS to our text line number 07825 535269 during matches or by contacting us on email to yourvoice@watfordfc.com.

We will treat your message in the strictest confidence and take the necessary action against offending parties.

If you have any comments or questions relating to our work on Equality, Diversity and Inclusion, please get in touch via the contact details below:

Find out more about the Watford Community and Sports Education Trust and hear from Community Director Rob Smith and Impact & Communications Officer Kristian Hitchins on the work they do in the community.