Ismaīla Sarr can, it seems, do it in front of a packed house against the champions as well as an empty one in the Championship.

The Senegal forward would not have expected his next Watford goal following his coming-of-age double against Liverpool in February to come eight months later in a behind-closed-doors Championship game against Wycombe Wanderers, but Sarr is so free-spirited and lacking in ego that he won't care who the goals come against or even who scores them. He would even have traded his early second-half header here against the Chairboys for three points because, as it turned out, it only came in a draw that felt very different to the one gained against Bournemouth on Saturday.

The expectation was that the third-placed Hornets would win this one against second-bottom and pointless Wycombe, but the Championship is famed for not going according to the form book and this was a stark reminder this division can throw up an unexpected result. This wasn't, though, a smash-and-grab from the home side – they fully deserved the point they picked up and could lay a fairly decent claim to having merited all three. 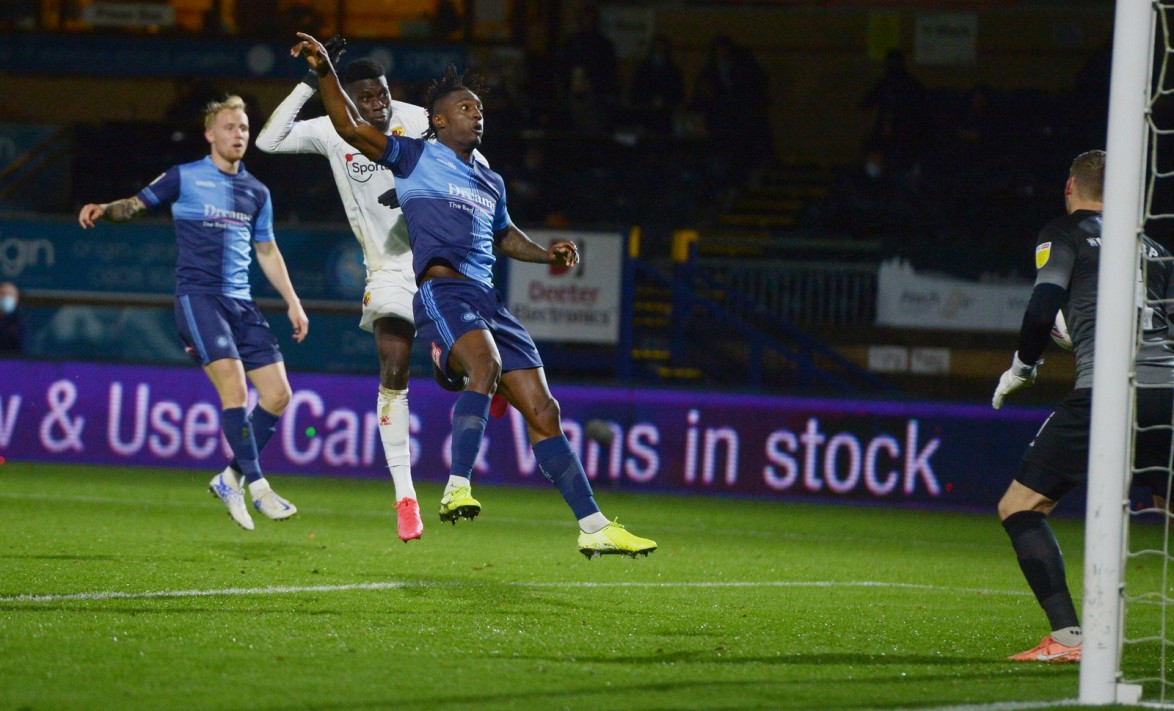 Ben Foster was the man of the match for the second midweek game in a row and that spoke volumes for the number and quality of chances the home created. It was difficult to believe this was their first point of the season and indeed their first at this level.

Vladimir Ivić promised a difficult match and the Head Coach was spot on. Wycombe gave the Hornets a searching examination, particularly of their physical capabilities, and even the most partisan Watford fan couldn't have grumbled if their beloved team had found themselves at least a goal down at the break.

The Chairboys fashioned four chances, from half chances to gilt-edged ones, in the last third of the half and Gareth Ainsworth, the Wycombe manager, couldn't quite believe his side didn't take one of them. He was jumping up and down in the technical area, unable to fathom how his side hadn't added to their two goals so far this season.

Scott Kashket forced a low saw from Foster; Akinfenwa had the Watford 'keeper flying high to his right; the handful of a striker blazed over from close range and then William Troost-Ekong produced a wonderful goal-saving tackle to deny Daryl Horgan in first-half injury time. They really did give this miserly Hornets defence a going over, in a different way to a more progressive side Blackburn did last week. You thought they might judging by the way Horgan closed Cathcart down virtually from the kick-off, a clear sign the visitors were going to be in for a tricky night. 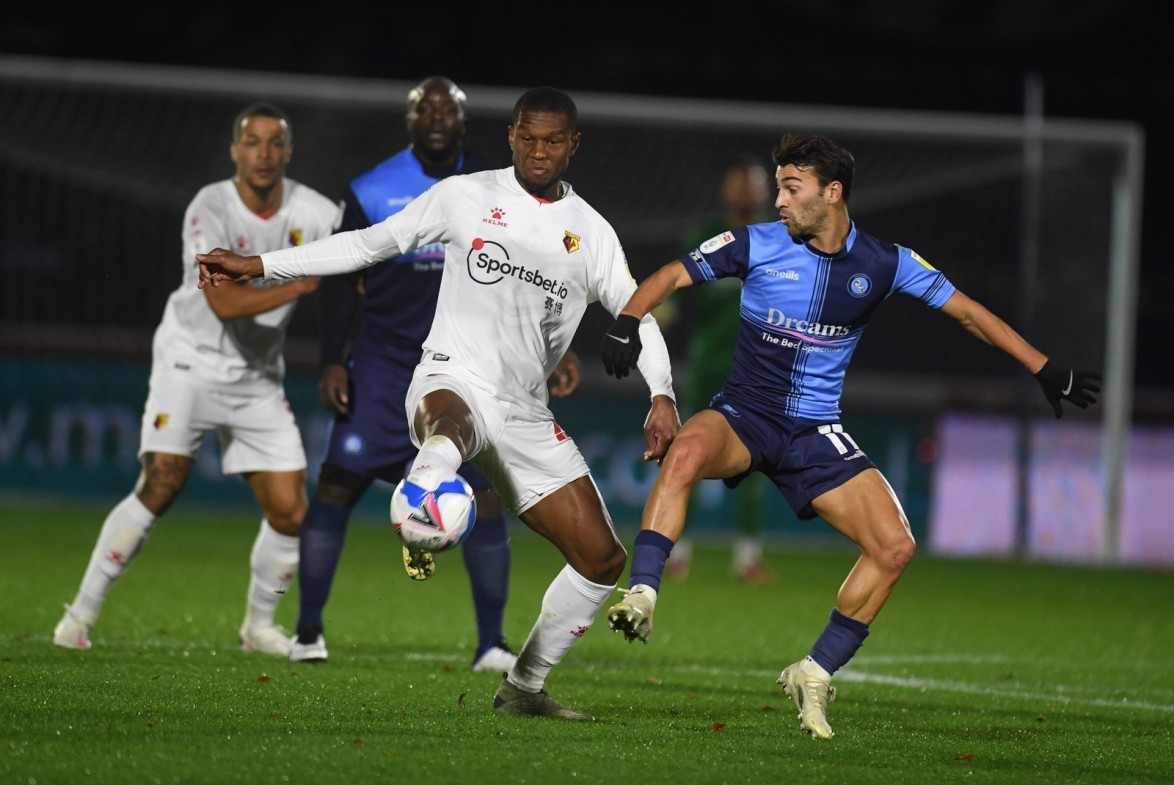 Perhaps the Hornets were not used to having so much of the ball, enjoying 64.7 per cent of the possession and completing more than 100 more passes than their hosts in the first period. They did manage to spray a few lovely cross-field passes across the slick Adams Park pitch, Étienne Capoue, Domingos Quina and Troost-Ekong finding their range in particular, but they were not particularly effective in possession. There was a shot early on from the returning Capoue that he didn't quite catch as he hoped, Ken Sema and Kiko Femenía flashed one each across the face of goal while João Pedro bundled one in with his hand. But, all in all, Ivić would definitely have been demanding more at the break. It was probably the most unhappy he had been at half-time since the game at Hillsborough.

His mood would not have improved when David Wheeler and then Akinfenwa, again, forced smart saves from Foster low to his right. It looked for all the world that Wycombe would eventually score the game's first goal, but as the Hornets learnt so painfully in the Premier League, you get punished, and punished heavily, for not taking your chances. Less than 60 seconds after Akinfenwa's chance, Watford swept up the field down the right, Christian Kabasele played in Femenía who fed over a wonderful cross that Sarr nodded in. Sarr is not prone to huge displays of emotion and he kept his celebrations even more muted as he knew the visitors were very fortunate to find themselves in front.

But ahead they were and you expected them then to close the game out, manage the game with the vast experience they have in their ranks and keep Wycombe at arm's-length. It didn't pan out that way and Wycombe came again, regaining their composure to level things up with a header from Anthony Stewart. Ivić will have been disappointed the goal again originated from a corner from the right. 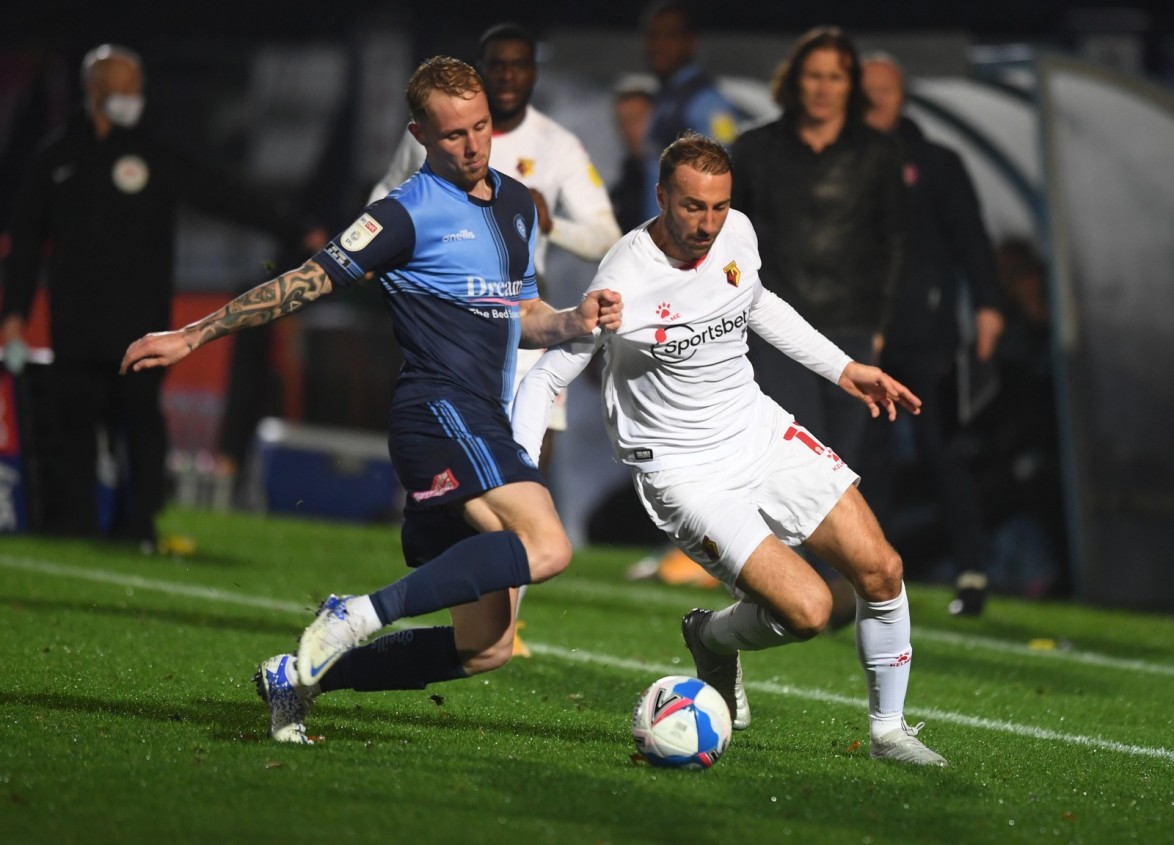 Foster remained the busier of the two 'keepers and he made another very decent low save, this time from Kashket, to prevent his team from failing behind. Indeed, the visitors would have been glad to see the back of Kashket and Akinfenwa in the last ten minutes.

There was still time for one last heart-in-mouth moment when Wycombe bundled in a disallowed one in injury-time from yet another corner that caused havoc while Glenn Murray, on as a late sub, was a whisker away from finding the bottom corner with one at the death.

But, all in all, it was a relief to come away with a point as this was a game the team would have lost last season, particularly during Project Restart. They are made of slightly sterner stuff under Ivić, plus they have Will Hughes, Andre Gray and Troy Deeney on their way back. They'll get more fluid as the season progresses.