Sarr made up for an earlier penalty miss with a powerful strike a minute before half-time, after King had previously given the Golden Boys the lead against his former club.

Donny van de Beek pulled one back for United shortly after half-time but late strikes from João Pedro and Dennis sealed a Watford win, after away captain Harry Maguire had been shown a red card with little over 20 minutes to play.

Having comfortably kept the likes of Cristiano Ronaldo and Bruno Fernandes at bay to earn their fourth victory of the season, the Hornets will quickly begin preparations for next week’s trip to Leicester City, where hopes will be high of adding to their winning momentum. 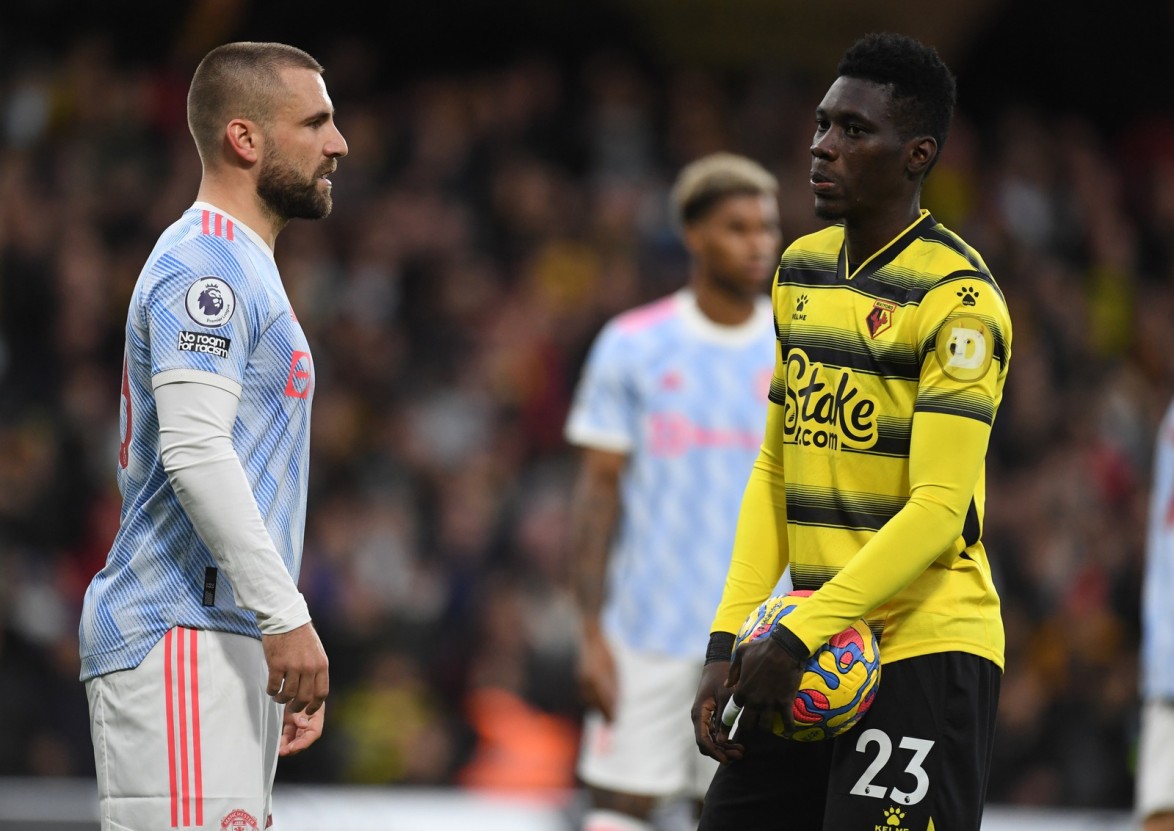 Both teams enjoyed spells of possession in the opening stages of the match, with Adam Masina and King among those most involved for the Hornets down the left-hand flank.

Such endeavour from King resulted in a Watford penalty in the sixth minute, with the 29-year-old profiting from a wayward United clearance before being brought down in the box by Scott McTominay.

McTominay avoided further punishment, and after Sarr’s effort was palmed away by David De Gea, Kiko Femenía thought he had put Watford in front with his tight-angled follow-up.

Referee Jonathan Moss ordered a re-take of the penalty after a VAR check ruled the goal out for encroachment, and De Gea once again came out on top in his battle with Sarr from 12 yards. 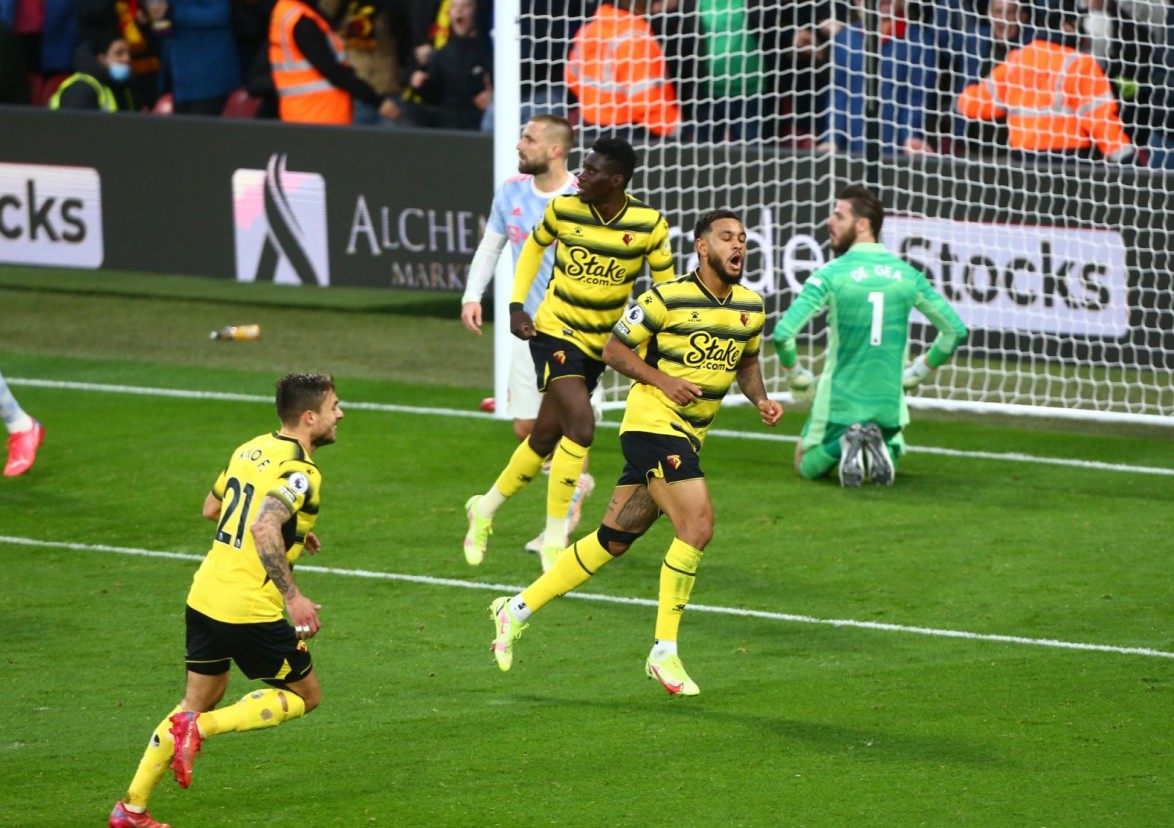 The visitors quickly gained a foothold in the tie with Ronaldo firing a deflected shot wide in the 13th minute, but Claudio Ranieri’s charges weathered the storm and put their opponents under pressure with a couple of half-chances moments later.

King was central to a good Hornets opportunity in the 23rd minute with a delicious cross-field through ball to Sarr, and after the latter’s attempted cross won a corner, the Norway international saw his goal-bound shot blocked from close range.

It wouldn’t be long before the home side finally edged their way in front though, with King latching onto a clever pull-back ball from Dennis after some fancy footwork from the Nigerian, to make it 1-0.

United provided a quick response to going behind and Ben Foster had to be on hand to make a couple of fine stops to deny England international Marcus Rashford close to the half-hour mark. 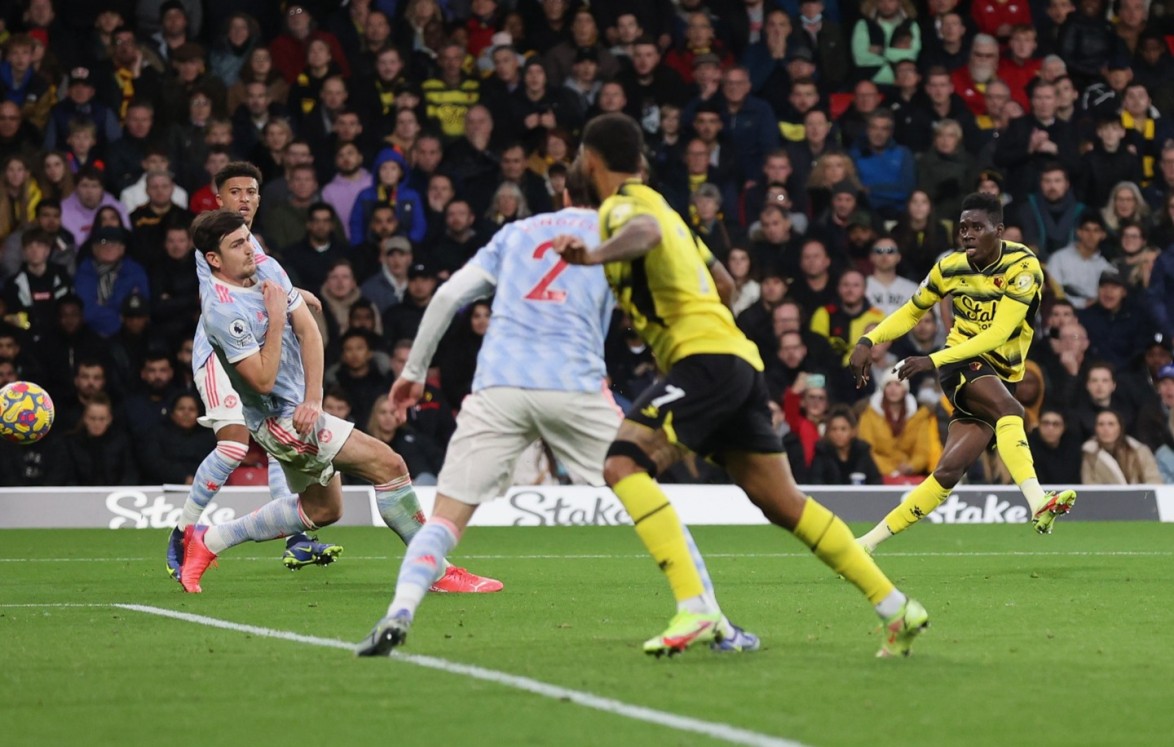 But Watford served Ole Gunnar Solskjær’s men a reminder of their quality when Imran Louza expertly picked out King on his way to goal, only for Maguire to produce a perfectly timed goal-saving tackle.

As the clash headed towards half-time King forced a smart save from De Gea with a piercing six-yard header, before Moussa Sissoko lashed a volley wide in the aftermath of the initial chance.

The increasing pressure from the Golden Boys would eventually tell in the 44th minute, with Sarr etching his name onto the scoresheet with a fizzing drive across goal that rustled into the corner of the net to double the advantage.

A couple of changes at the break prompted a strong start to the second half from United, and within five minutes of the restart replacement van de Beek halved the deficit, calmly converting Ronaldo’s composed knock-down header. 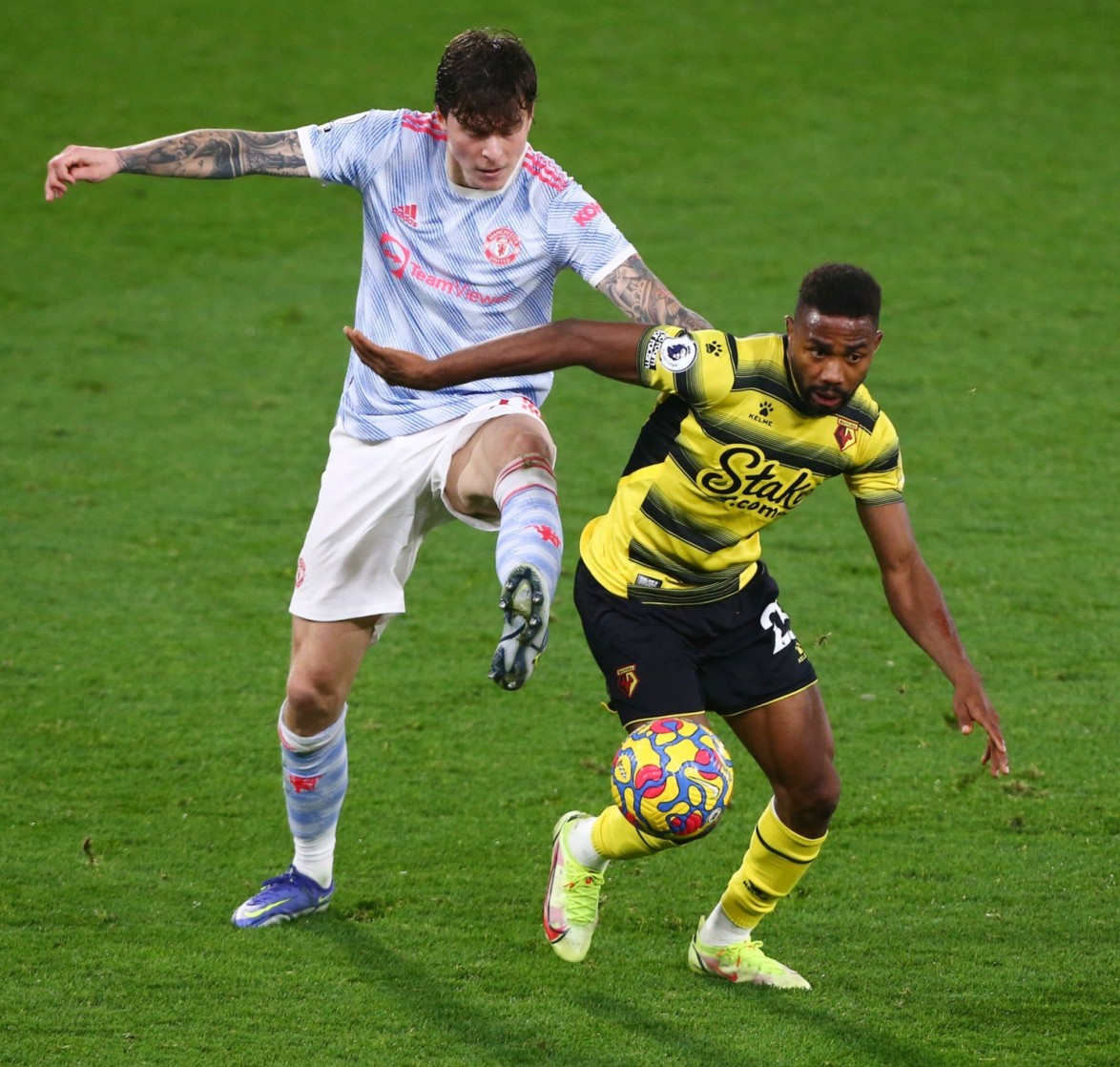 Watford went straight down the other end and King tested De Gea after a mazy run down the left, before Ronaldo was then denied by Foster one-on-one from point-blank range.

As the clock ticked past the midway point in the second period, Nemanja Matić swiped wide with a speculative attempt for United, before skipper Maguire was shown a second yellow card for a poorly-judged tackle on Tom Cleverley.

Brazilian youngster João Pedro injected energy into the game off the Watford bench and went close to adding to his side’s lead with a glancing header in the 85th minute, while fellow sub Cucho Hernández similarly proved to be a thorn in United’s side.

And after going so close to opening his account for the season, João Pedro would indeed get his maiden Premier League goal before the death, lashing home from a tight angle past De Gea to put the result beyond doubt.

With five minutes added to the 90 there was still time for Watford to treat the Vicarage Road faithful to a fourth, with Dennis putting gloss on the scoreline with a smart strike across the face of goal, clinching three valuable points in style.