Davis set the tone for a special afternoon with an acrobatic opener in the first few moments, before Troost-Ekong doubled the advantage at the opposite end of a hotly-contested first half.

The Hornets continued where they left off after the break - with João Pedro smashing home the third 12 minutes into the second period after an Ethan Horvath mistake - before Sarr added a fourth, and a Gabriel Osho red card concluded the drama on show. 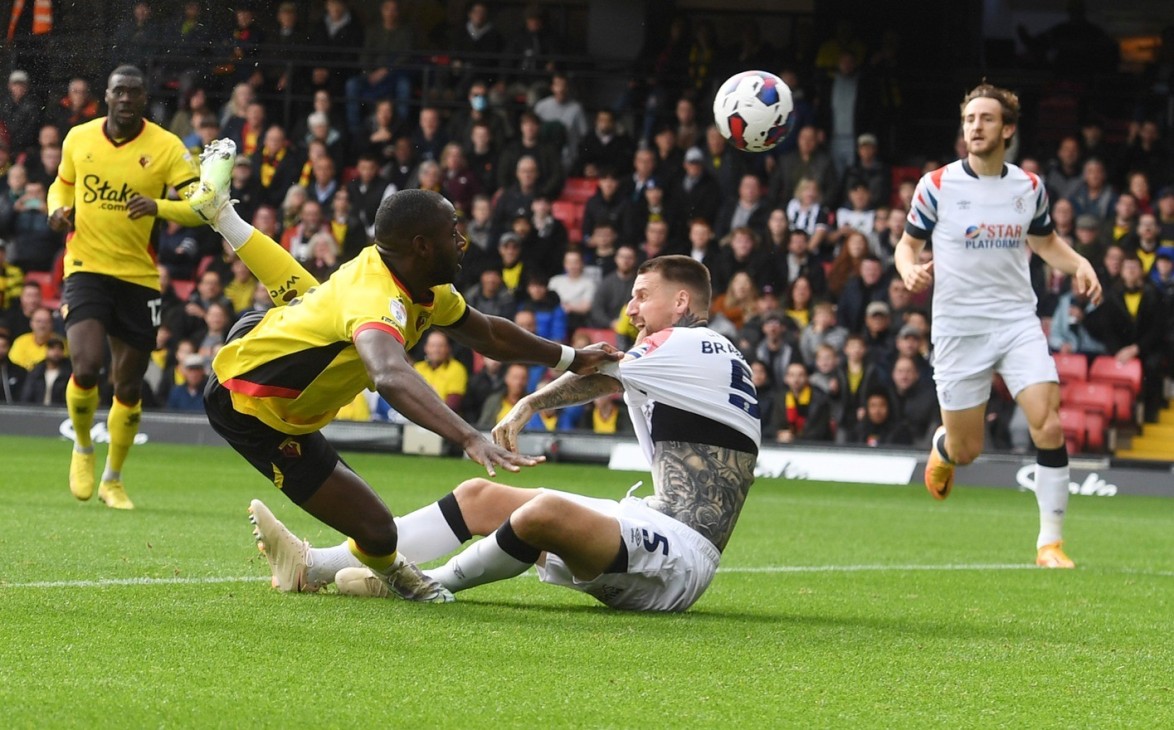 The impressive performance and result significantly pushes Watford up to 10th in the second-tier standings after 16 games, and Head Coach Slaven Bilić and his team will be hoping to build on their winning momentum away at Wigan Athletic next time out, on Saturday October 29 (3pm KO).

Bilić made three changes to the XI that had fallen to defeat at Millwall last time out, with Craig Cathcart and João Pedro fit enough to start in place of Mattie Pollock and Yáser Asprilla, and Edo Kayembe coming in for Imrân Louza.

And the Hornets burst out of the blocks in front of the buoyant Vicarage Road crowd, Davis making the most of the first real chance of the match with an audacious scorpion-kick finish from Hassane Kamara’s cross, to make it 1-0 in the third minute. 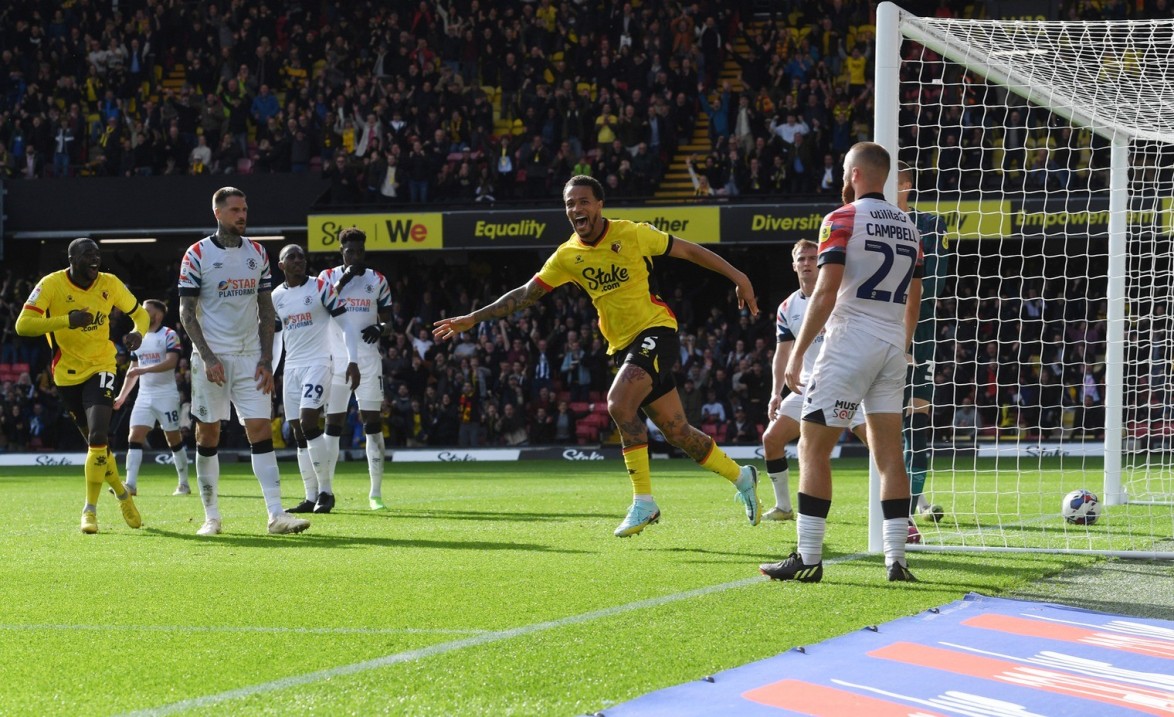 Allan Campbell was at the centre of Luton’s response almost immediately after the restart, with the Scotland international flashing an attempt narrowly wide of Daniel Bachmann’s right-hand post after Cathcart had blocked Carlton Morris’ initial effort.

Luke Freeman was next to have a go for the Hatters, though his tame header was comfortably collected by Bachmann, but Davis was soon back on the charge for Watford with a left-footed strike that required a smart Horvath save.

Home calls for a penalty were waved away in the 12th minute, when Sarr collided with James Bree in the Luton box, and after the Senegalese attacker again unsuccessfully appealed for a spot-kick, Sonny Bradley was shown the game’s first yellow card for a late tackle on the lively João Pedro. 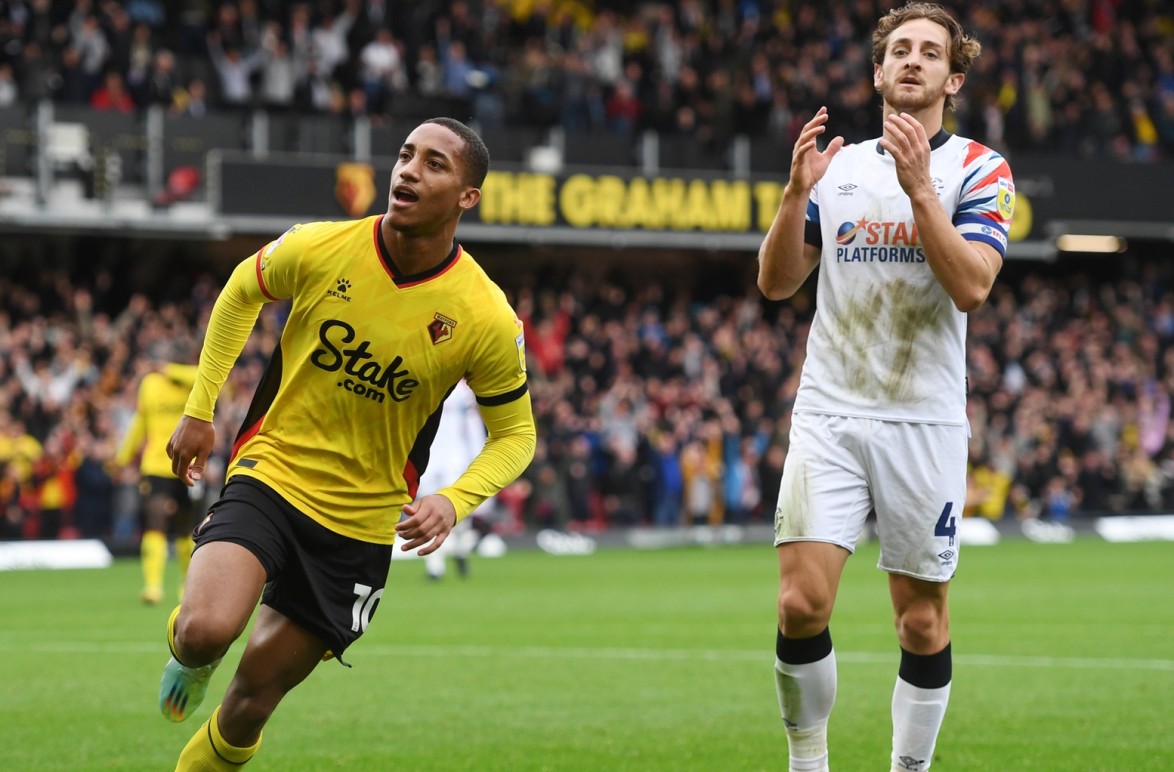 The significance of the occasion was emphasised by the Luton bench’s response to Bradley’s booking - with manager Nathan Jones particularly animated - but with play resumed it was the hosts back on the attack, with Horvath doing well to deal with a piercing Kamara cross.

Kayembe - still searching for his first goal in yellow - kept Horvath busy with a low shot on the half-hour mark, before a rare away attack saw Elijah Adebayo head over after beating Bachmann in the air.

The impressive Davis went close to doubling both his own and the team’s tally two minutes before half-time, after getting the better of Bradley inside the area, but moments later Troost-Ekong did tap home from close range - after a well-worked corner - to make it 2-0. 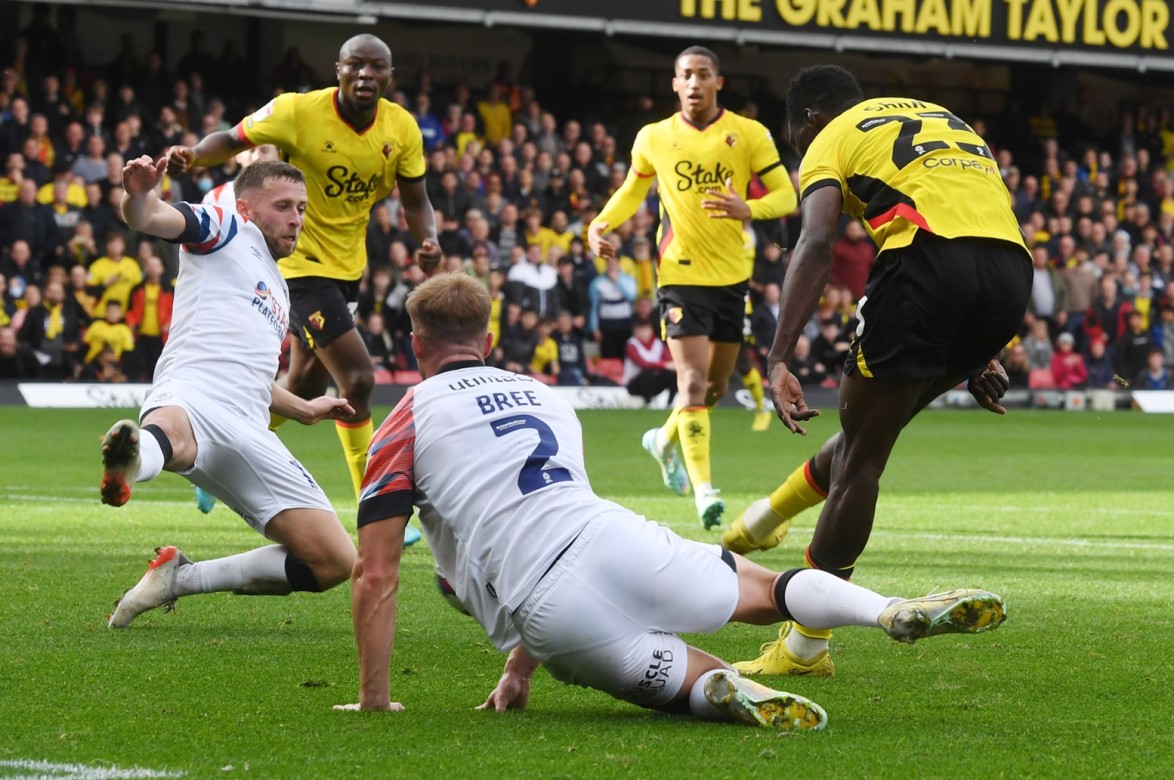 The match continued at a predictably fast pace after the interval, and Alfie Doughty was quickly shown a yellow card for a dangerous foul on Ken Sema that didn’t go down well with the home crowd.

Half-time substitute Osho should have got Luton on the scoresheet in the 53rd minute, but he failed to connect with the ball unmarked at the back post, and just four minutes later João Pedro punished a loose Horvath pass to stretch Watford’s lead to three. 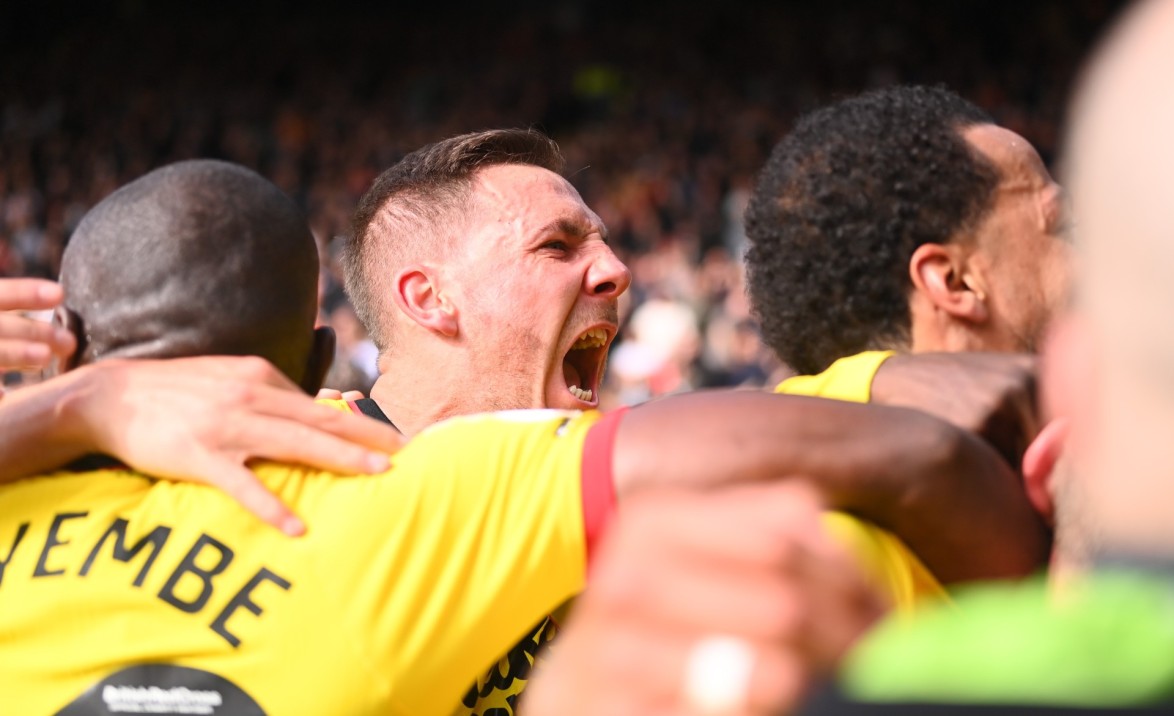 But Watford added gloss to the scoreline in the 80th minute, with Sarr getting in on the act with a composed right-footed finish to make it 4-0 and replicate memories of the famous 1997 win at Kenilworth Road.

And Luton’s day went from bad to worse in the 83rd minute, when Osho was dismissed for a poor challenge on Sema that brought his cameo appearance to a premature end.

Chants of ‘Olé’ accompanied Watford’s smart possession play in the dying stages, and though Vakoun Bayo and Asprilla continued to spearhead a push for a fifth, the Hornets cruised to the handsome win and were met with a chorus of cheers by the supporters at full-time.