In a very uncertain world, fans can head into the latest lockdown with at least a degree of confidence that their beloved team is getting back on track.

After two disappointing results and below-par performances on the road at Wycombe and Barnsley, home comforts proved something of a reference point this team needed to rediscover its bearings. This sort of come-from-behind win, especially when you leave it very late to floor a very decent Stoke team, is the sort that builds confidence and belief. The very nature of the league means you are going to have to recover from a goal, or even two, down at times this season so this formative group now know they can do it.

They are also turning Vicarage Road into something of a fortress. It's now four wins from five at home this season and the last time the club did that was in 2014-15. And we know what happened then. If this season is to climax in a similar thrilling fashion, and their is an awful long way to go, Vladimir Ivić knows he needs to address the slowness of starts to games, which stretches all the way back to Project Restart, and greater concentration at set-pieces. They gave another team the headstart, again from a ball from the right, and had to dig deep to muscle their way back into this topsy-turvy contest and win it with some brilliance from Ismaïla Sarr.

It was another poor start by the Hornets, only this time at home. A slick short-corner routine involving Nick Powell and John Obi Mikel resulted in Steven Fletcher guiding the ball into the net from the closest of ranges. The only consolation at the goal coming so early was that it gave the Hornets 88-and-a-half minutes to muster a response.

It look a while and the portents didn't look great for a bit, but the tide began to change when Cleverely, leading by example, outmuscled Tommy Smith on the touchline in front of the stand named after the club's greatest ever manager. GT would have loved the way Cleverely chased down a lost cause to win back possession, and, as it so often does, it set the tone for a shift in momentum. 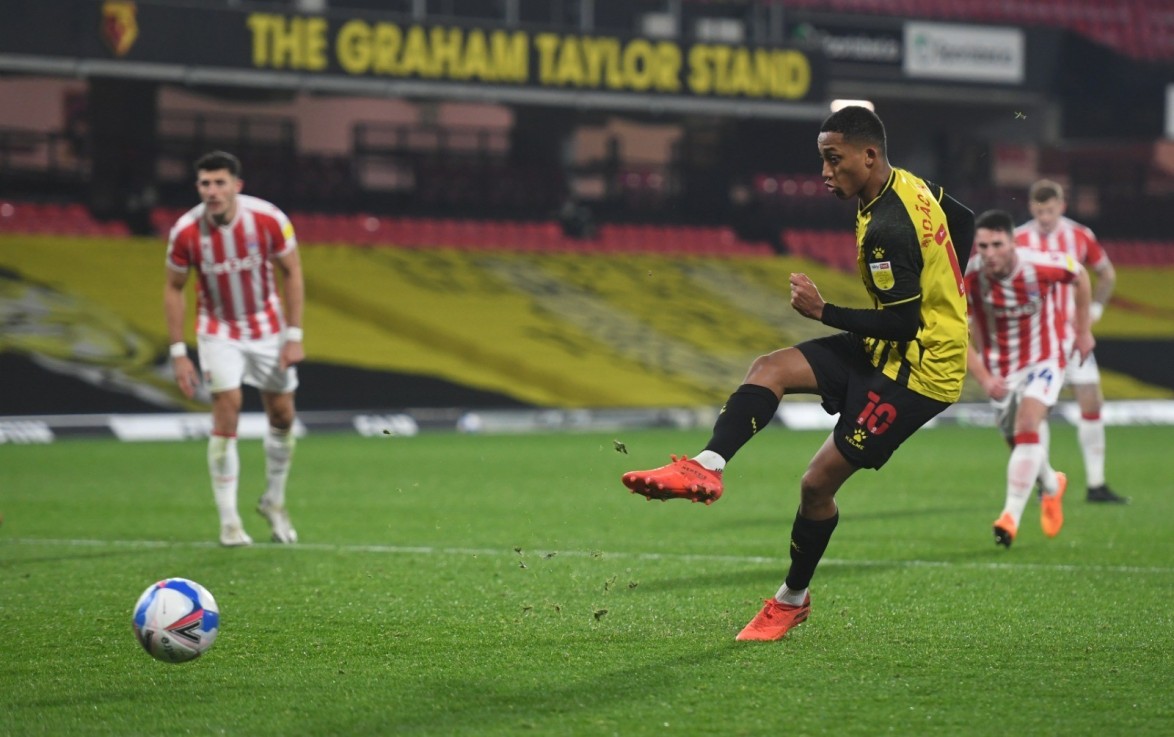 Cleverley wasn't done there and grabbed the game by the scruff of the neck, much like the club captain on the bench has done so often during the past ten years. Out of nothing really, Cleverely picked up possession on the edge of the box, took a couple of touches to engineer a bit of space and then let fly with one that crashed off the underside of the bar. It was, at first glance, a bit like the one his former England teammate Frank Lampard unleashed against Germany at the 2010 World Cup. Only this one wasn't quite over the line and needed João Pedro to pressure Angus Gunn in the Stoke goal to take it over the whitewash.

Cleverley celebrated frenziedly and was making doubly sure referee Andy Davies, under pressure from the opposition, didn't chalk it off. He knew the team needed it, especially after the last two results.

The goal had a galvanising effect. Étienne Capoue made one of his typical sliding interceptions to cut out a pass from Harry Souttar and then piled into Powell. Christian Kabasele executed a smart recovery tackle on Fletcher; Ismaïla Sarr could have made it two from a Ken Sema pass and then Cleverley and Chalobah each went close with headers, both from Kiko Femenía crosses. It was much more like it and the Hornets went into the break with a head of steam. 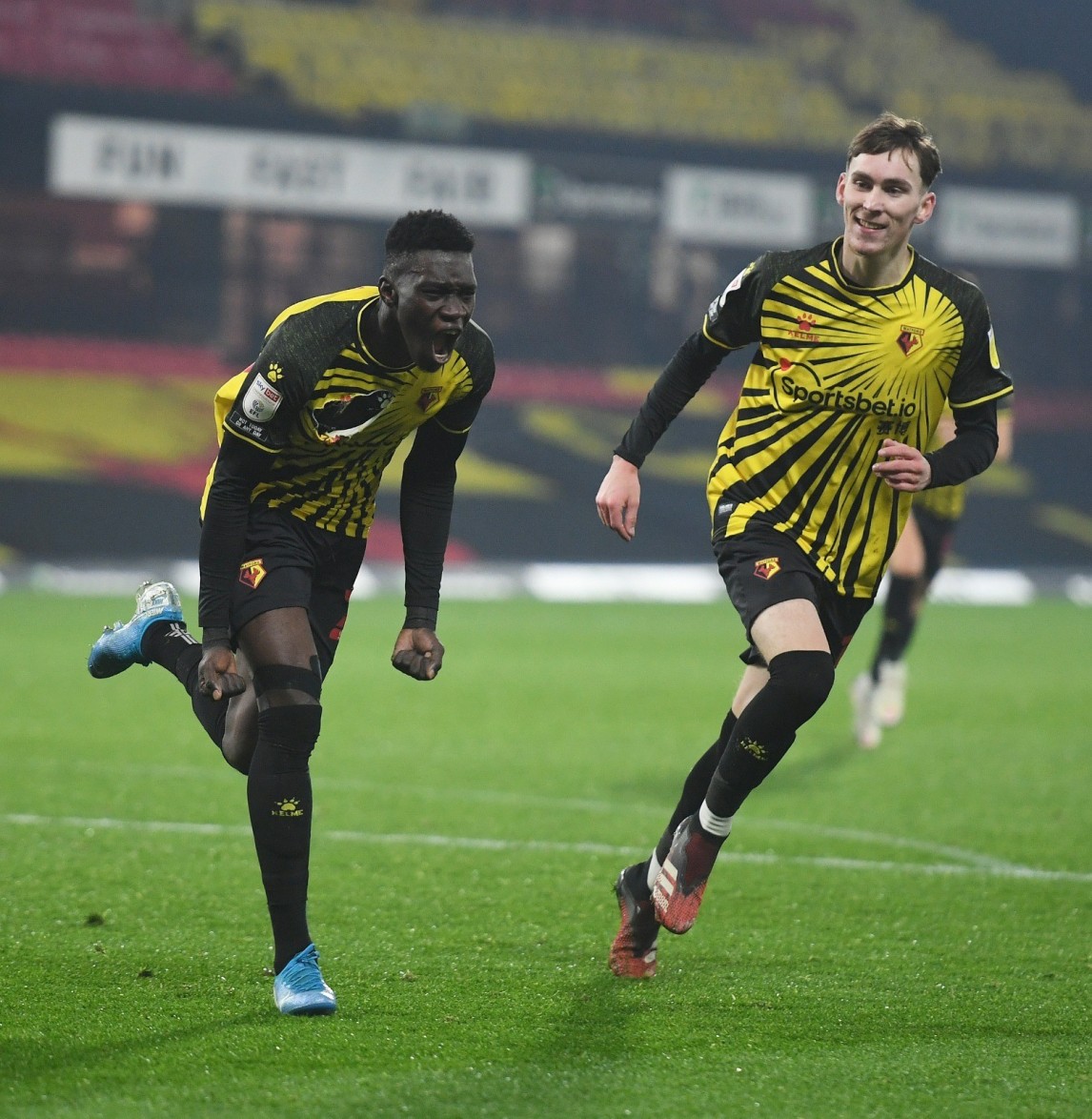 The momentum continued after the break and they got their noses in front on the hour. Sarr's nimble feet and a short burst of pace drew a foul from Gunn. The referee might have procrastinated over the first goal, but this was an easy decision to point to the spot. João Pedro assusmed spot-kick duties and rolled the penalty into the bottom left-hand corner.

Ivić then made a double change from a position of strength, replacing the overworked Cleverley with the youthful James Garner and João Pedro with Andre Gray, not worring one iota about the fact the Brazilian had just tucked in his fourth of the season. This is a squad game.

Gray nearly put daylight between the two teams by steering in a header from another delicious Femenía cross and he probably wished he had when Powell equalised with nine minutes of normal time remaining. But just when it looked like they might have thrown away two points, up popped Sarr to slam in the winner. It was the sort of goal that would have seen the Rookery End erupt. It was just a crying shame there were not more in here to witness the drama with their own eyes.

These are very strange times, but thankfully there are players of the calibre of Sarr to provide a bit of welcome cheer.