Watford’s Premier League campaign kicked off in style with a 3-2 win over Aston Villa at Vicarage Road.

Watford took the lead early on through an Emmanuel Dennis strike and then the Nigerian turned provider for the second as Ismaïla Sarr doubled the Hornets' lead before half-time. Substitute Cucho Hernández made it three with a curled effort, before goals from John McGinn and Danny Ings reduced the deficit.

There have been brief reunions between the Watford faithful and their team since the start of the pandemic, but this served as the first opportunity, at full-capacity, for the fans to show their pride at supporting a Premier League club since an unforgettable night in February 2020.

From the off, it was clear Sarr’s frightening speed had gone nowhere over the summer. He broke down the right-hand side after barely two minutes on the clock. His cross was deflected for a corner but the sound of anticipation and hope from the stands filled the air.

Sarr, alongside striker Emmanuel Dennis, had plenty of joy down the right in the first half, and the pair were linking up well in attack. It felt almost inevitable that the duo would find a breakthrough eventually, and it came perhaps even sooner than expected. 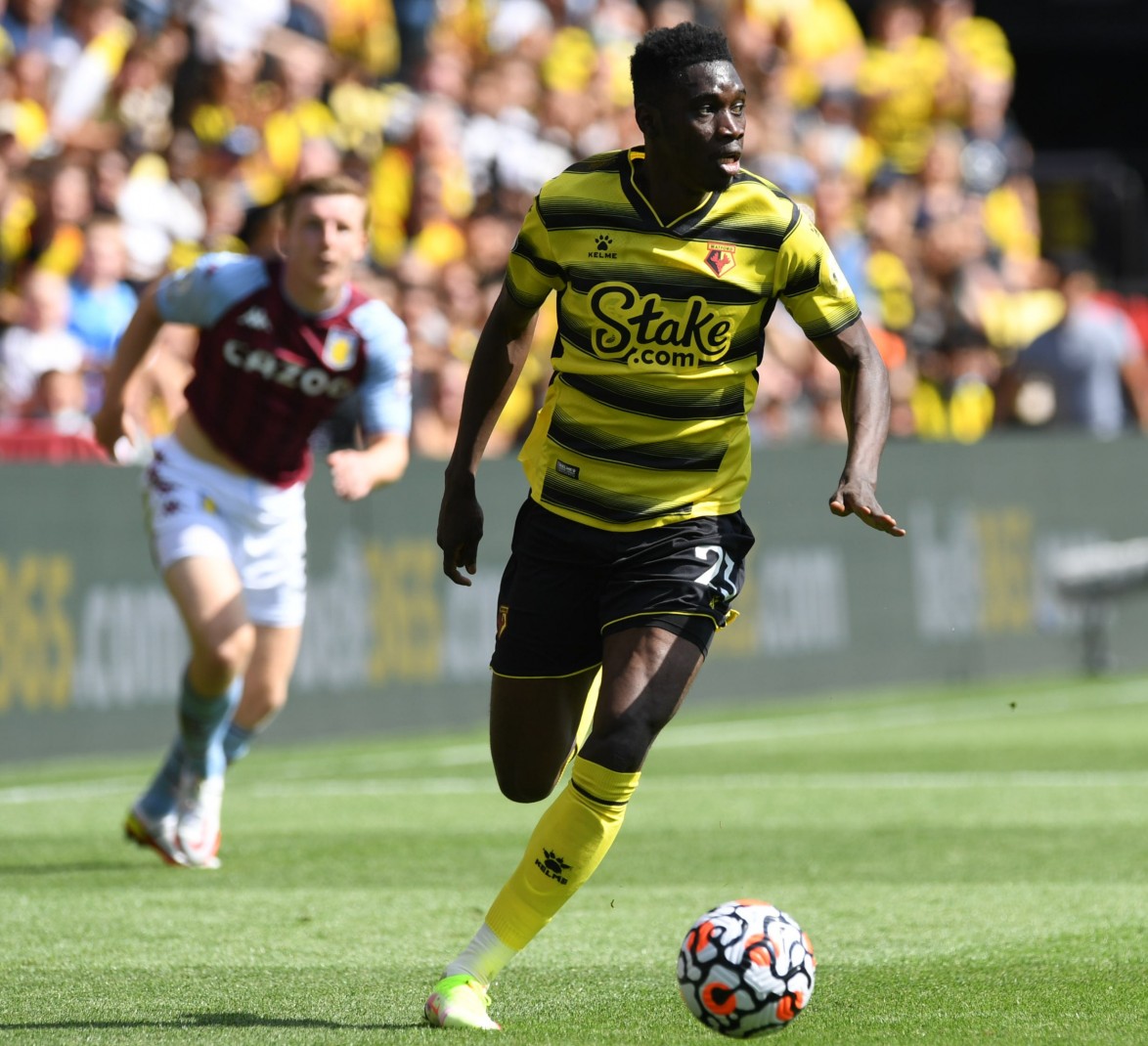 The Senegalese winger once again had the beating of Villa’s Matt Targett, and managed to play a low pass across to Dennis in the 10th minute. The Nigerian’s first attempt was blocked but the ball fell back favourably, and the new signing made no mistake on the follow-up, slotting under goalkeeper Emiliano Martínez.

Vicarage Road erupted with jubilation as the net bulged and yellow shirts wheeled away in celebration.

The Sarr and Dennis connection continued for the duration of the half, as the two exchanged fancy flicks and both tested Martínez in the Aston Villa goal.

The visitors hen started to grow into the game, and former Hornet Ashley Young’s curled cross forced Daniel Bachmann to dart off of his line and collect.

The second goal came when Dennis broke away in the middle of the park, had space to run into and then played a ball out to Sarr. The winger drove past Targett and fired at goal, with Tyrone Mings’ attempted block creating a deflection, looping over Martínez and, eventually, into the net.

Half-time beckoned soon after, and for fans and players alike, the chance for a breather. It also gave a chance to reflect, and remember those from the Watford family who could not be at Vicarage Road, having passed away during the pandemic. And it was a chance to show support and gratitude to the NHS, with more than 200 staff from West Herts Hospitals walking a lap of honour to applause from all four corners of the stadium.

The second-half began with Villa on the front foot. Jacob Ramsey’s effort deflected wide of the far post and his resultant volley from the corner whizzed over.

Dennis hadn’t seemed to stop running since the first minute, and after 65 minutes he was withdrawn. Hernández was given the green light to replace him and introduce himself to the Watford fans after four years on loan.

As introductions go, this one is definitely up there with the best.

Immediately into the thick of the action, the Colombian cut onto his right foot from the left flank, curling a shot in off the far post for Watford’s third of the afternoon. Just a minute after his substitution, on his Premier League debut, in front of The Rookery. 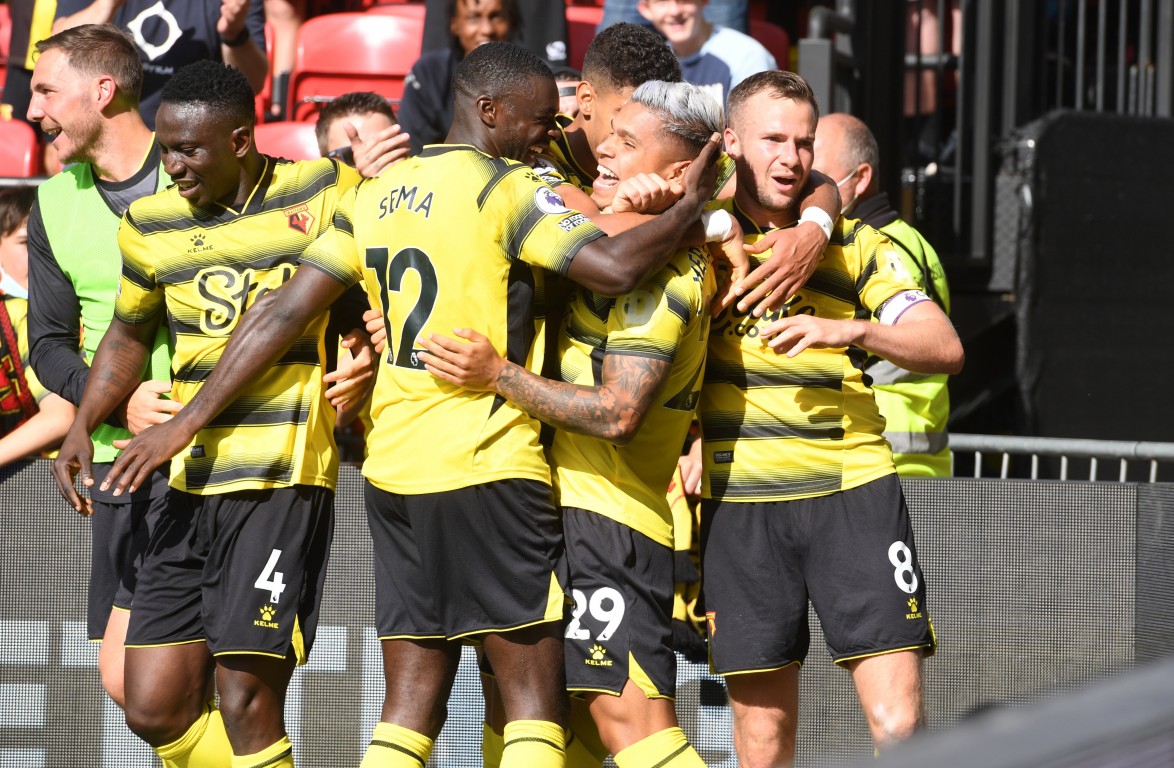 Aston Villa were quick in their response to conceding a third, with substitute Leon Bailey’s cross finding McGinn. The Scot’s half-volley found the top corner to immediately reduce the deficit, and keep Dean Smith’s side in the game with just over 20 minutes left.

In the 72nd minute supporters around the stadium stood up to sing the name of the late Graham Taylor, who managed both teams during his career and was being remembered on the Graham Taylor Matchday.

Into the final stages of the match, both sides shared chances as Aston Villa looked for a way back into it. Bailey’s free-kick flew over Bachmann’s crossbar, and McGinn’s teasing cross couldn’t find the head of Ings.

Minutes later, Hernández was back in position on the left side, and tried to find substitute Deeney with a pass. The captain came agonisingly close to making crucial contact with the ball but Martínez was able to claim it.

Six minutes of added time unsettled some Watford fans despite the two-goal lead, and the nerves would have to stay for a little while longer. Adam Masina brought down Bertrand Traoré in the dying seconds of added time and referee Mike Dean pointed immediately to the spot.

Ings found the top corner with his strike to heighten the tensions at the end of added time. Villa were now throwing everything at the Hornets backline, with Cash’s cross arcing dangerously towards the six-yard box.

Bachmann leapt high to catch the cross and prompt a cheer filled with relief from the stands.

Life in the Premier League begins with a win, and Xisco Muñoz’s first experience in a full Vicarage Road is a victorious and dramatic one.