Keinan Davis marked his first start for Watford with a first-half goal, but the Hornets were frustrated by a late Jewison Bennette equaliser that earned Sunderland a 2-2 draw at Vicarage Road.

Aston Villa loanee Davis pounced on Anthony Patterson’s parry to make it 1-0 to Rob Edwards’ men not long after the half-hour, though Black Cats youngster Aji Alese equalised on the stroke of half-time.

Both sides enjoyed chances and saw several penalty appeals waved away in a highly-competitive encounter, and a second-half Luke O’Nien headed own goal in Watford’s favour was cancelled out by away substitute Bennette in the 87th minute.

Having picked up their fifth draw of the 2022/23 campaign Watford remain within touching distance of the play-off places, with a trip to Stoke City next up after the international fixtures (Sunday October 2, 12noon KO). 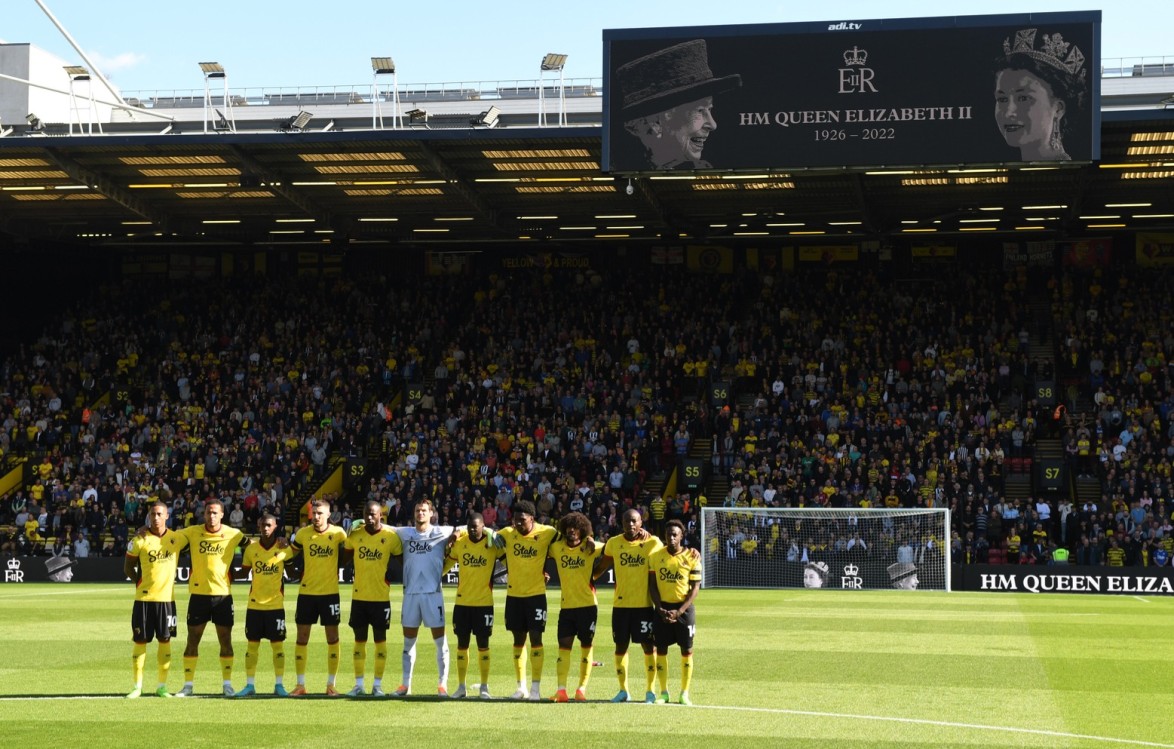 Head Coach Edwards made five changes to the XI that had succumbed to defeat at Blackburn Rovers last time out, with Davis coming in for his first Watford start, alongside William Troost-Ekong, Kortney Hause, Hassane Kamara and Yáser Asprilla.

The players and staff joined the Vicarage Road crowd in paying tribute to the memory of Her late Majesty Queen Elizabeth II prior to kick-off, with all inside the stadium observing a minute’s silence before the National Anthem was played. A wreath was also laid by His Majesty’s Lord-Lieutenant of Hertfordshire, Robert Voss CBE, accompanied by Rita Taylor and Karen Colley, representing the family of the late Graham Taylor OBE, as well as Luther Blissett OBE DL.

Watford - operating in a 4-3-3 formation - started the game brightly, with the tweaked backline looking to initiate attacks and Davis, Ken Sema and João Pedro asking questions of the away defence early on.

João Pedro enjoyed the first clear-cut chance of the game when he met Hamza Choudhury’s teasing ball and forced Patterson into a strong reaction stop, though the referee’s whistle would have ruled out the effort had it gone in. 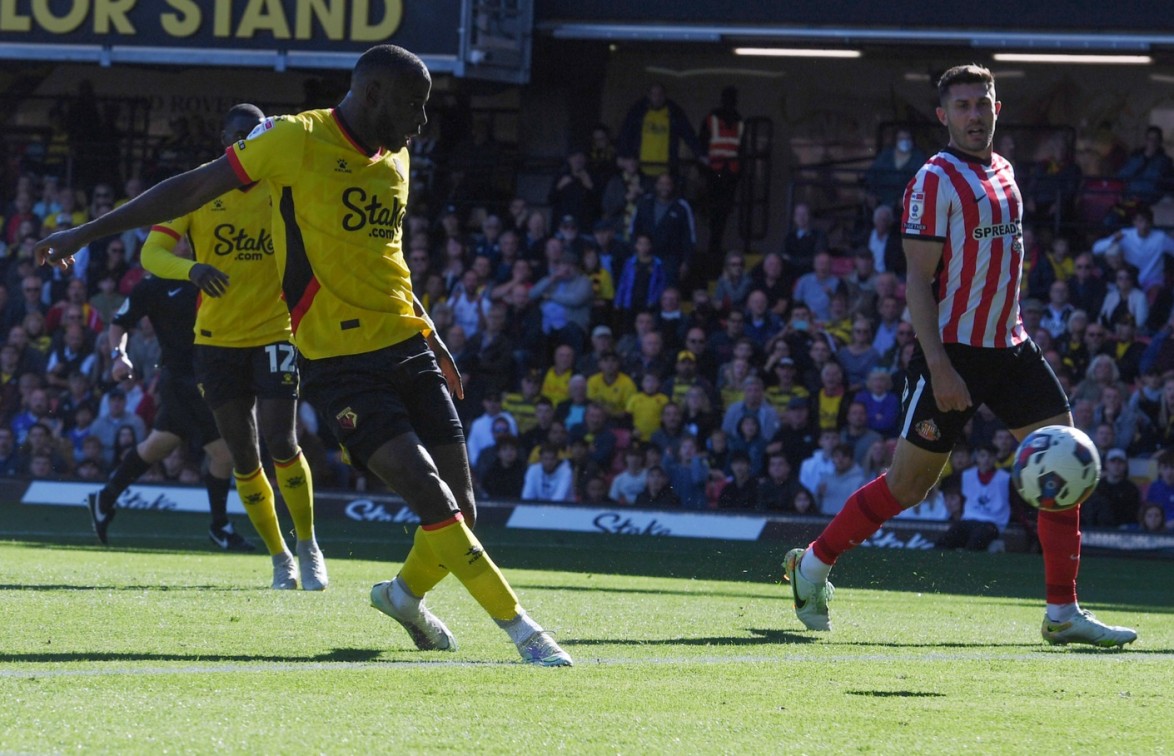 Asprilla was next to get an eye on goal in the eighth minute following some silky link-up play with João Pedro, though Troost-Ekong and Kamara had to be alert to danger at the other end as Sunderland looked to get their noses in front.

Visiting midfielder Lynden Gooch sent a speculative shot wide of Daniel Bachmann’s upright in the 22nd minute, with both teams struggling to swing the momentum in their favour, and then Patrick Roberts saw his penalty appeals waved away by ref John Busby.

Patterson calmly collected a tame João Pedro effort from 20 yards in the 33rd minute, moments before Davis finished into an empty net to put the Hornets in the lead after the Black Cats stopper had parried Kamara’s cross.

With Sunderland looking to respond quickly after going behind, Craig Cathcart did well to deflect a curling Jack Clarke shot out for a corner, before the Wearsiders again were unsuccessful in their appeals for a penalty kick. 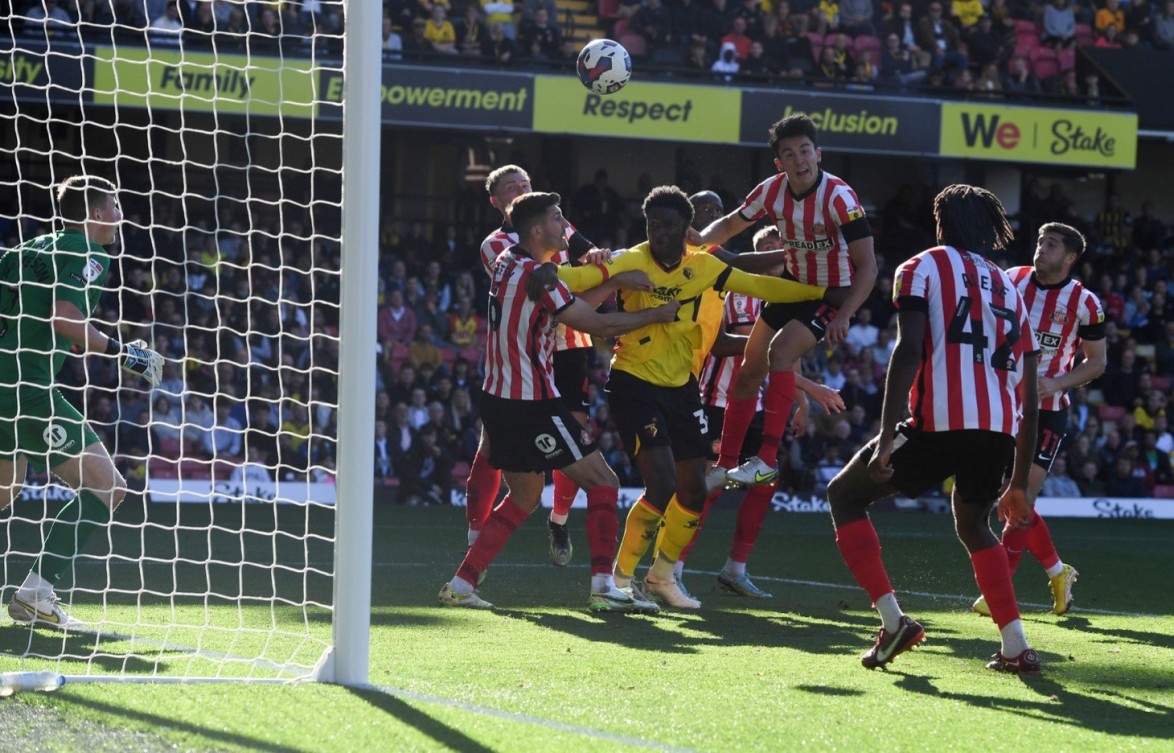 Skipper Corry Evans struggled to test Bachmann with a weak attempt as the clock ticked towards the break, but there was still time for Alese to level the scores with a close-range effort that was judged to have sneaked over the line despite Choudhury’s best efforts to clear.

Some neat João Pedro trickery lit up the start of the second half, in a move that ultimately saw the Brazilian’s through-pass narrowly escape the on-rushing Asprilla, before the latter did get a shot off minutes later, but Patterson stood firm.

Davis made a nuisance of himself in the 55th minute, with the Sunderland stopper caught out of his goal, and then Watford found their calls for a penalty fall on deaf ears when Kamara’s cross came off Gooch.

The home pressure eventually told just after the hour, with a dangerous free-kick causing a melee in the box and former Hornet O’Nien heading past his own goalkeeper to restore the home advantage. 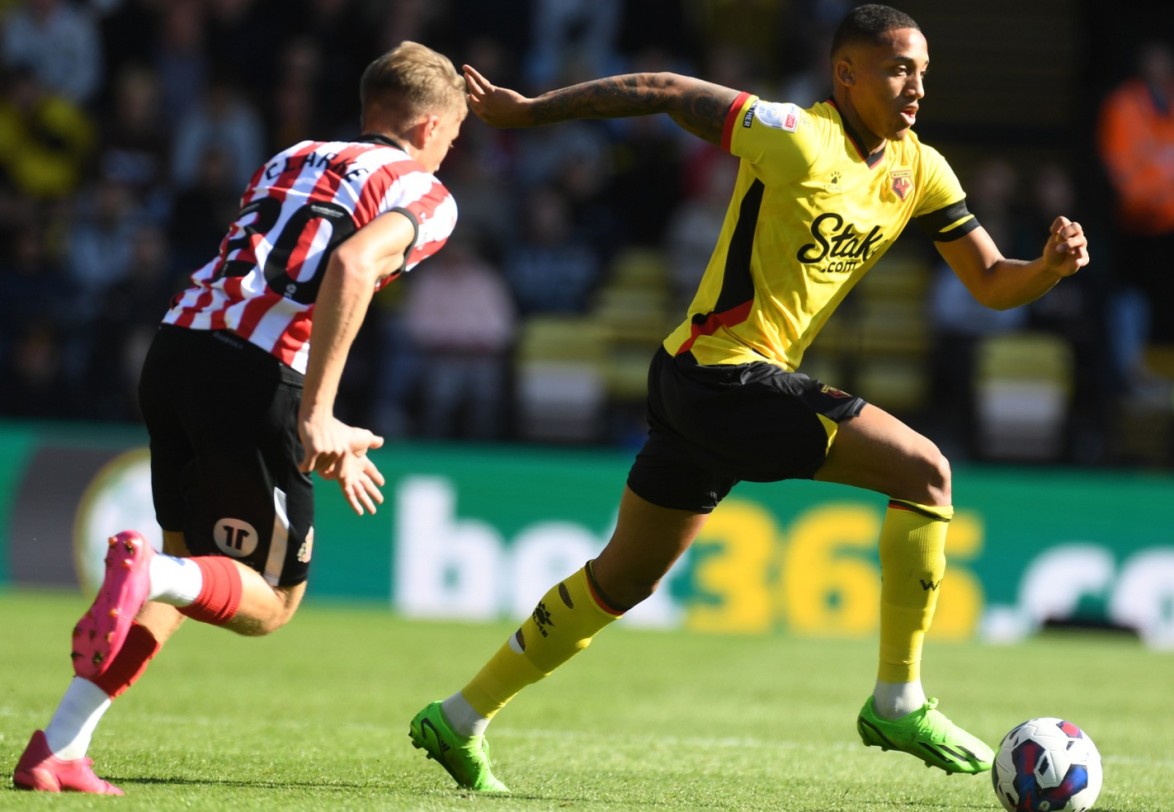 João Pedro led the charge for a third home goal with an ambitious shot from a tight angle little over 20 minutes before full-time, while back at the other end the Mackems again saw shouts for a penalty waved away.

Clarke thought he had made it 2-2 seconds later with a tidy finish from the left, only for the referee’s assistant to raise his flag for offside, and with the lead intact Kayembe was next to strike for Watford but his shot went wide.

Sunderland pushed forward in search of a second equaliser late on, with Roberts and Leon Dajaku going close, before Bennette capitalised on a loose ball in the home box to make it 2-2 three minutes before the death.

There was a feast of heavy challenges in the remaining seconds as both sides went in search of a dramatic winner, but there wasn’t time for a fifth goal and Watford were forced to settle for a share of the spoils.