Will Hughes and Tom Cleverley are both cricket connoisseurs and they will both appreciate what it means to have runs on the board.

The Hornets have the football equivalent of that right now after a third win in three days allows them to sit back and largely relax as the other 22 teams play tomorrow. The Hornets have plenty of work to do in the remaining 15 games to make up for some lost ground earlier on, but they are up to third and level on points with second-place Brentford. They've done all they can in this round of matches and will hope to have exerted a bit of scoreboard pressure.

The 2-1 win here, secured by two goals in as many first-half minutes from Joäo Pedro and Will Hughes, was not plain sailing and it was a bit hairy at the end after Derby pulled one back with 13 minutes to go, but that's how it goes in the Championship. You don't win 6-0 every week and this one is the sort on which promotion pushes are built. Xisco Muñoz will have been as pleased with this one, if not more so, than the rout of the Robins. They got in front, extended the lead, managed the game well and then held on in a bit of a grandstand finish to end a perfect six days. Everyone played their part, including the three subs. 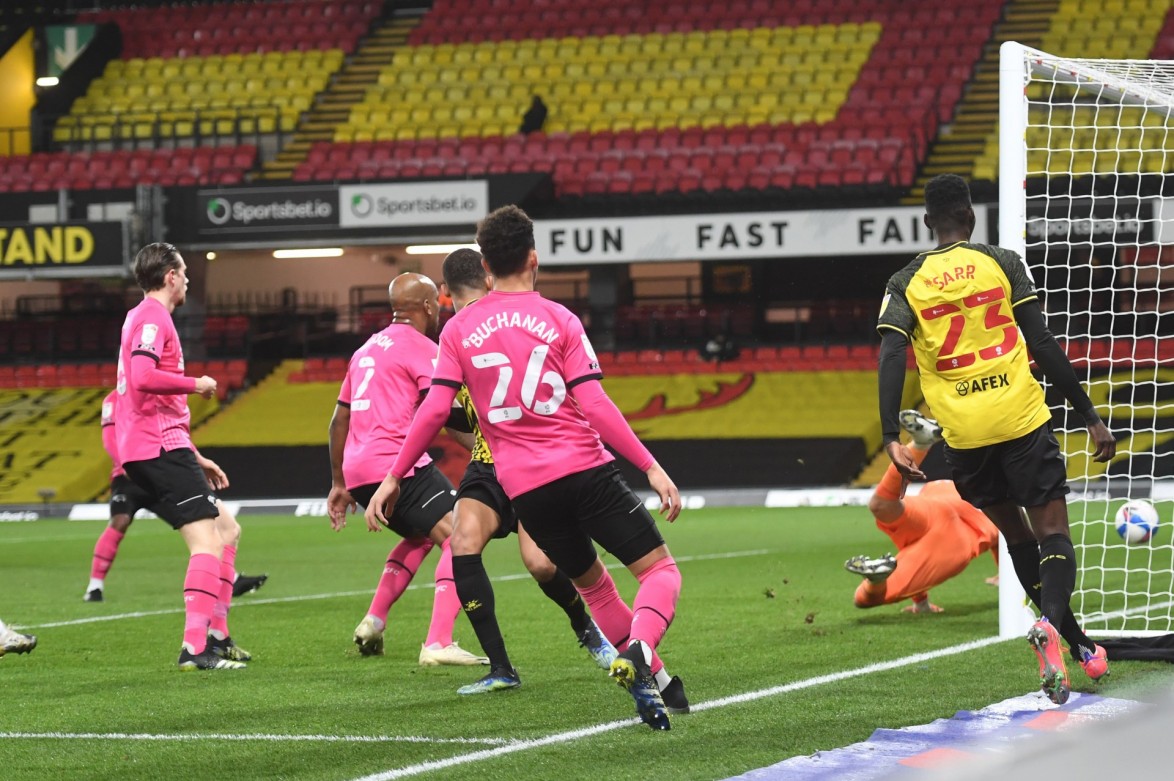 It looked like being one of those attritional first halves at Vicarage Road, you know like the ones against Cardiff and Queens Park Rangers. Derby looked extremely well organised and very much like a side who had won five of their last six.

They popped the ball about nicely and dropped into a very compact shape. However, they didn't possess a player with the electric pace of Ismaïla Sarr who can turn a match on its head. The Senegal opened his legs to devastating effect just before the 20-minute mark, leaving Lee Buchanan for dead in the sort of space you are usually afforded in a telephone box. He latched onto a lovely-weighted pass from Kiko Femenía, scorched past his marker and fizzed the ball across the face. It hit Andre Wisdom first and then ricochet off Joäo Pedro's right heel. The Brazilian didn't know too much about it, but sometimes you don't, especially when you are trying to carve out a career at the focal point of the attack. He got a spectacular goal in the game earlier on in the season at Pride Park and yet this one, from a fraction of the distance and with a slither of the force, counted for exactly the same. He now has eight for the season. 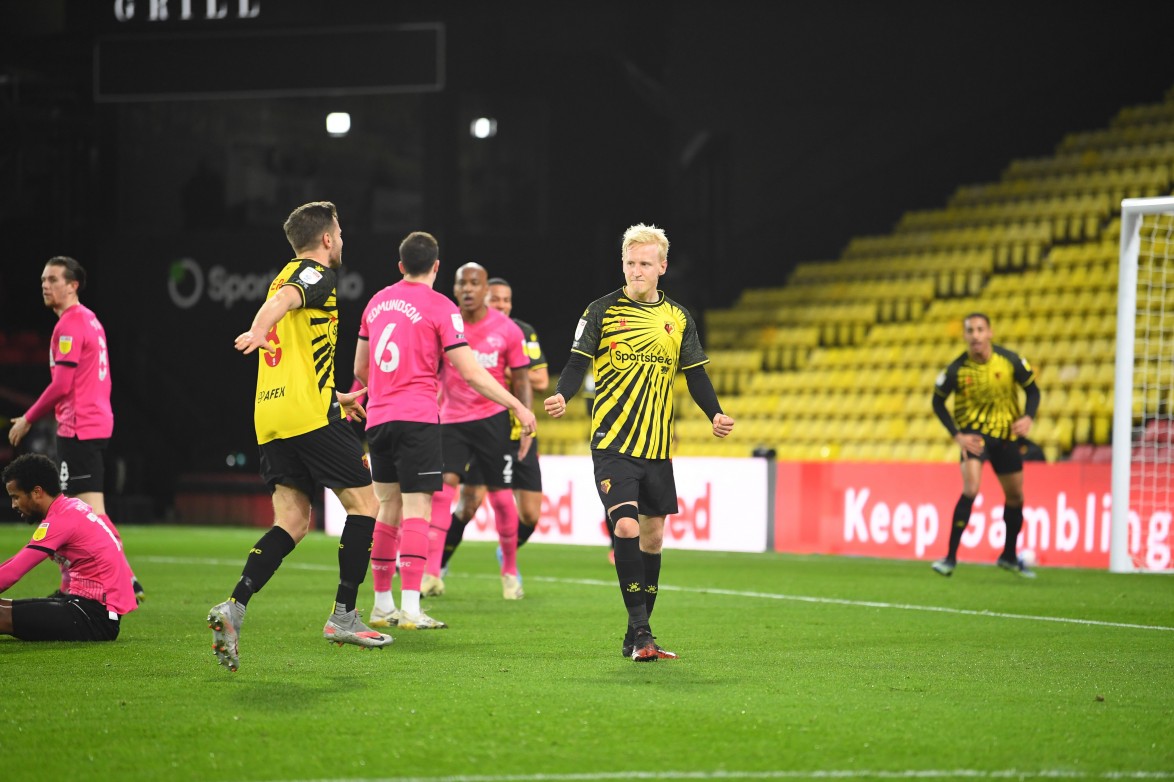 Derby were probably still reflecting on how that opener came against the run of play when Will Hughes rattled in a second two minutes later. The midfielder will have secretly enjoyed that one against his former club, especially the way it rattled into the bottom corner, but a large dose of the credit should go to the tireless Tom Cleverley who not only prevented a Derby counter with a smothering block in the face of four Derby players, but also set up the chance for Nathaniel Chalobah to back heel it to Hughes.

Like against Bristol City, it would have been more. From a rich supply line down the right, Femenía flashed one across the face that Chalobah and João Pedro, both at full stretch, just missed and then Sarr put over an even more teasing ball at the end of the half that saw João Pedro end up in the net but, somehow, not the ball.

The Hornets ended the half in complete control and largely untroubled, apart from one Martin Waghorn looped onto the bar and one Colin Kazim-Richards had ruled out for a foul by Andre Wisdom from a corner. 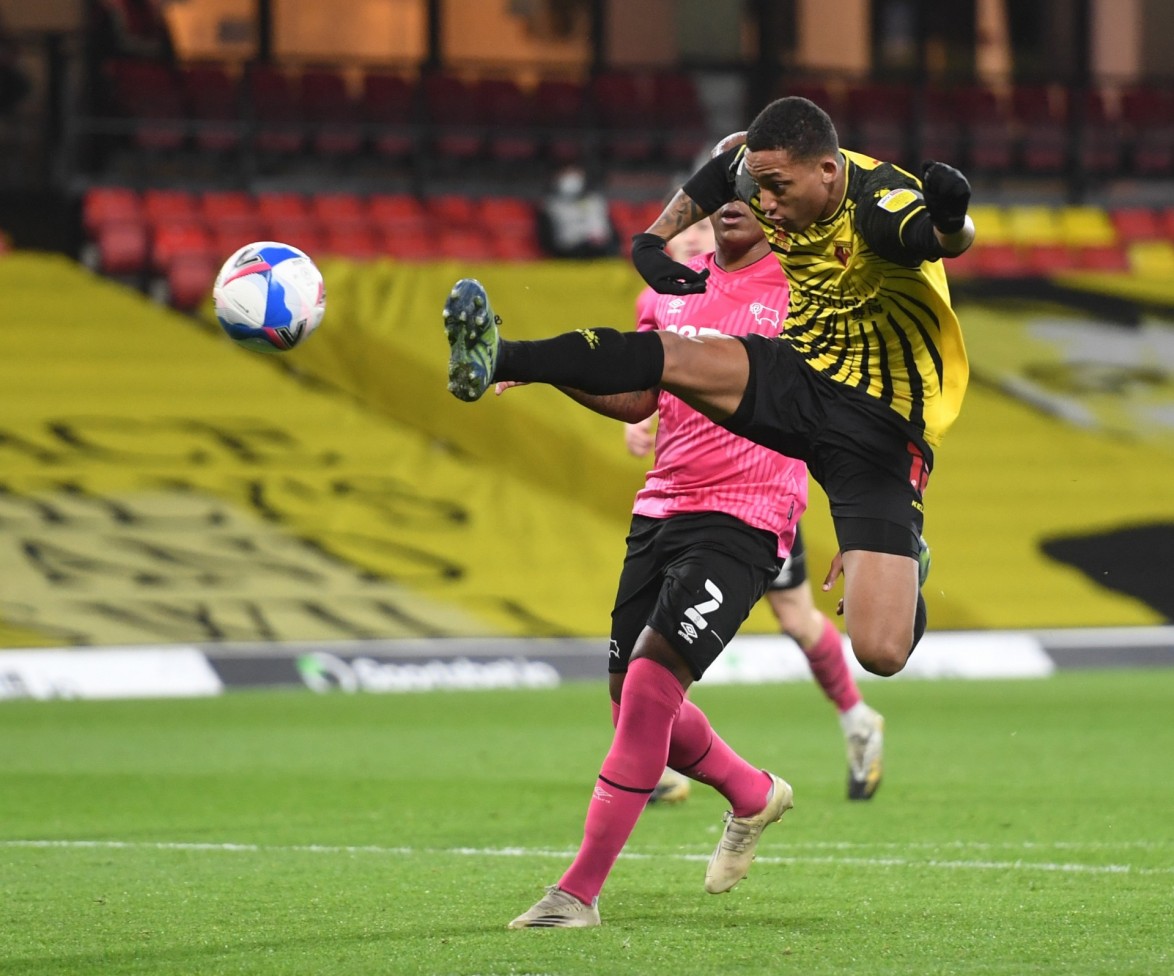 The home side played on the front foot in the second period, too, showing no sign of wanting to sit back. They showed really good game management and could have increased their lead when Sarr tried to find the top left-hand corner with his apparent weaker foot and then Ken Sema and João Pedro were a whisker away from getting on the end of searching cross from Cleverley.

Muñoz showed good awareness of the demands on his squad by bringing off Chalobah, Hughes and Sema in the space of 16 second-half minutes, replacing them with Dan Gosling, Ben Wilmot and Philip Zinkernagel. It was a nod to just how much he trusts his whole squad and how he is prepared for this run-in to be a squad game.

Things got a bit tense when William Troost-Ekong inadvertently deflected a cross from the Watford-born Nathan Byrne into his own net, the first goal the Hornets had conceded since Albert Adomah scored late winner here more than 270 minutes ago. Daniel Bachmann needed to pull off a rather unorthodox save right at the death and how crucial it proved. That's now one defeat in nine and six of those have been wins. The Golden Boys look like they are on the charge.