Displaying, albeit mainly in the first half, the much-needed energy and bite that was missing on Saturday, the Hornets got back on track with a merited win over Rotherham at a much happier Vicarage Road.

Christian Kabasele gave the team the early goal you always need against a lower-ranked team who set their stall out with plenty of men behind the ball and then Troy Deeney, having had a major hand in the first, scored the second around ten minutes later to drive home the advantage. This is what the fans came back to see, what they had been teased with on Hive Live during the behind-closed-doors Championship games. It felt like a long way back for Rotherham at that point.

The flurry of goals expected after scoring two in the space of 11 minutes didn't materialise, a result of the Hornets taking their foot off the gas, Rotherham improving markedly after the break and the fact that this was the sixth game in 17 days. It's difficult to play with such intensity for a full 90 minutes when games come so thick and fast. 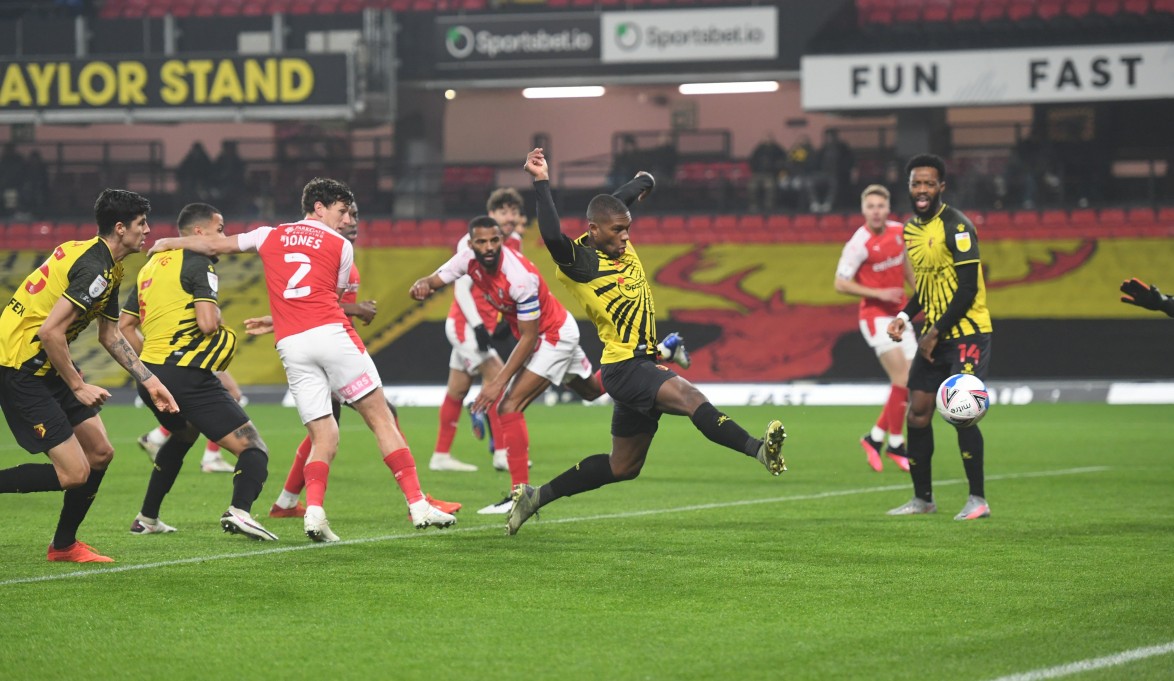 Going for the jugular and the complete 90-minute performance can wait for another day. Three points here was the order of the day and it moved the Hornets up to fourth, right back in the thick of things. Significantly, the Championship will be starting to notice Deeney, who now has 83 goals in this division, is starting to hit his straps.

He loves nothing more than a bit of theatre and feeding off the crowd, so he would have loved playing such a starring role early on in front of the second batch of 2,000 fans gratefully allowed back into the stadium. He created a chance inside three minutes for Stipe Perica, his latest strike partner; flicked on the resulting corner from Ken Sema for Kabasele to score his first goal for three years and then the club captain slid in a cross from Kiko Femenía at the far post. Now with a spring in his step, he then showed he hasn't completely lost the art of running in behind when he almost latched onto a defence-splitter from Nathaniel Chalobah. Deeney had a wry smile at that one, perhaps chuckling at just being labelled a penalty-taking target man these days.

Making his 406th appearance, Deeney was pulling the strings in this one and had more opportunities in the opening first half than he had in the previous six games put together. He also teed up Tom Cleverley for what would have been a lovely third inside 20 minutes. Cleverley tried to bend one in the top right-hand corner and then had a second go soon after following a one-two with Ismaïla Sarr.

It was amazing what a difference a pair of early goals made. Sarr opened his legs for what felt like the first time in weeks; William Troost-Ekong strode out of the defence and played a slide-rule pass for Sarr, the sort Bobby Moore or Rio Ferdinand would have been proud of, and Chalobah won a thumping header in the shadow of the Graham Taylor Stand.

A game is never really dead in this helter-skelter league, and Rotherham served notice that the Hornets should remain on their toes at the start of the second half. Kyle Vassell flashed a cross-shot dangerously across the face inside two minutes of the second half and then Michael Smith really should have got the header from the subsequent corner on target. There was also a header from Angus MacDonald that caused a few hearts to flutter.

You could make a very strong case for Rotherham being the better side in the second half. They certainly forced more of the play and definitely had more chances, although Perica had a decent one he kicked himself about seven minutes from time. A clean sheet, a first since the win over Luton Town, was therefore well-earned, long overdue and secured thanks to a terrific last-ditch tackle from Kabasele in injury time, completing a job just about well done.