The Hornets took another step forward in their preparations for the return of Premier League football this afternoon (Saturday June 13), seeing off Brentford thanks to a thunderous first-half strike from Étienne Capoue and a late clincher from Ismaïla Sarr.

During the build-up to his goal, 31-year-old Capoue showed off all the attributes which will make him a key member of the squad in the final nine games of the league season. He regained possession on the edge of his own area, sent Danny Welbeck on his way down the left wing and ran the length of the pitch to receive a return pass before firing his shot into the top corner past David Raya in goal.

There were equally encouraging signs across the pitch. Sarr showed he’s lost none of his lightning pace during lockdown, bagging a deserved goal in the dying seconds of injury-time; Craig Dawson and Christian Kabasele looked assured in defence; Troy Deeney, entering the field as a second-half substitute, was just as regularly tracking back to win the ball in his own half as leading from the front.

The Bees, who sit fourth in the Championship, were the first team to visit Vicarage Road since Liverpool on February 29 and the circumstances of the visit were in stark contrast to that dramatic evening 15 weeks ago.

Played behind closed doors with no supporters in attendance, only the two squads and a skeleton crew of non-playing staff attended the fixture with strict social distancing measures in place throughout the stadium.

The match started competitively with early openings for both sides. Brentford’s quick free-kick was played across the area but not converted and Welbeck drilled a long-range effort just wide of the post before Tom Cleverley’s strike stung Raya’s palms.

Minutes later, Raya had no chance as Capoue’s postage stamp effort sailed past him into the top corner. From the goal stemmed further confidence and the Hornets went into half-time well worth their lead. 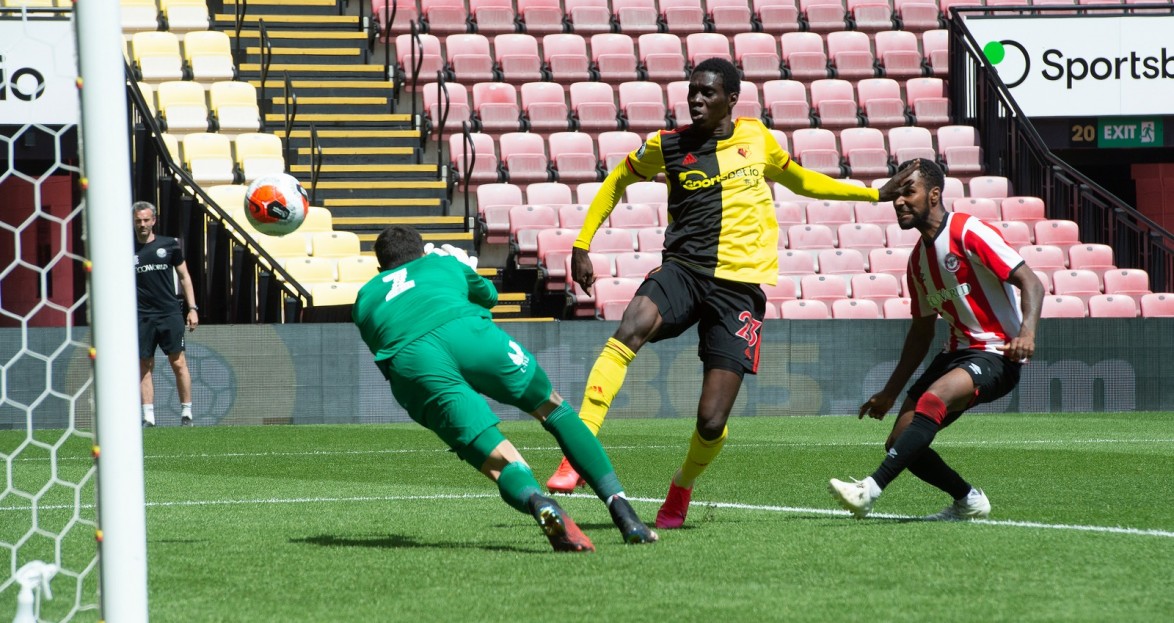 The hosts made seven changes at the interval, ensuring every member of the squad is match sharp and ready to perform when called upon next weekend and beyond.

They settled quickly and looked just as dangerous going forward during the second period, especially with Sarr providing a constant outlet down the right and Abdoulaye Doucouré keeping things ticking over with Nathaniel Chalobah and Domingos Quina in midfield.

Sarr almost turned provider for his fellow French speaker just after the hour-mark but Doucouré could not quite reach his cut back before it was turned behind.

The Senegal international was rewarded for his constant threat late on though, tapping in from a João Pedro cross to seal the victory.

The performance and result were encouraging but, with exactly a week until Leicester City visit, former Foxes coaches and insatiable perfectionists Nigel Pearson and Craig Shakespeare will no doubt still be noting areas for improvement.

Any loose passes or hesitant tackles will be stamped out and no doubt the added pressure of a Premier League fixture will up the intensity, even without the presence of 20,000-plus supporters cheering the Golden Boys on.