Watford fell to a disappointing 5-1 defeat at the hands of Leicester City in their final home outing of the 2021/22 Premier League season.

João Pedro put Roy Hodgson’s charges in front early on with an impressive, instinctive finish from close range, but James Maddison and Jamie Vardy goals ensured the visitors went into the break 2-1 up.

Harvey Barnes strengthened the Foxes’ lead almost immediately after the break, and he made it five late on with a composed finish after former England star Vardy had completed his brace.

The result leaves Watford 19th in the standings ahead of the final round of games next weekend, when manager Hodgson will sign off from his time in charge away at Chelsea (Sunday May 22, 4pm). 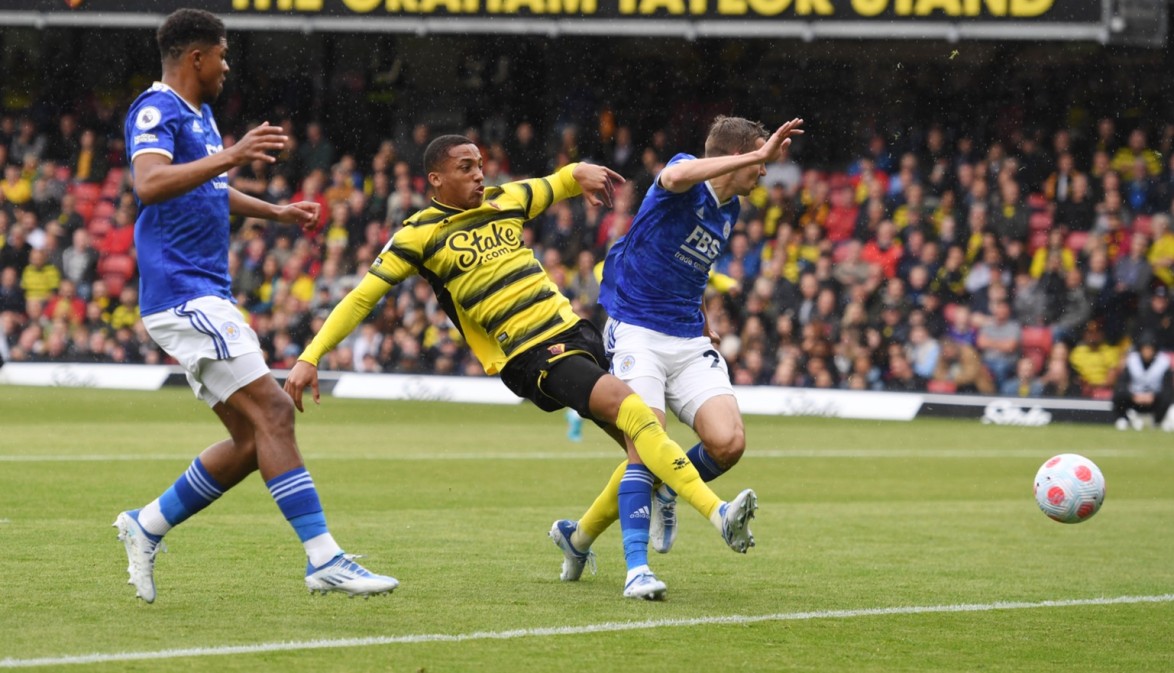 Hodgson was forced into a late change ahead of kick-off - with Craig Cathcart being drafted into the XI due to Samir picking up an injury in the warm-up - and after incoming Head Coach Rob Edwards had been presented to the Vicarage Road crowd the Hornets started brightly, with Samuel Kalu and João Pedro looking lively down the right-hand side.

And it didn’t take long for the latter to etch his name on the scoresheet, the Brazilian youngster reacting quickest after the ball deflected off Youri Tielemans in the box, and lashing a shot across goal to make it 1-0 in the sixth minute.

Watford maintained the pressure after going in front and more Kalu trickery opened up a chance for Ken Sema, before a corner on 11 minutes saw an Adam Masina effort hit the crossbar.

Away goalkeeper Danny Ward was forced into a fine save moments later, when an on-rushing João Pedro evaded the Leicester defence and latched onto a teasing Jeremy Ngakia cross. 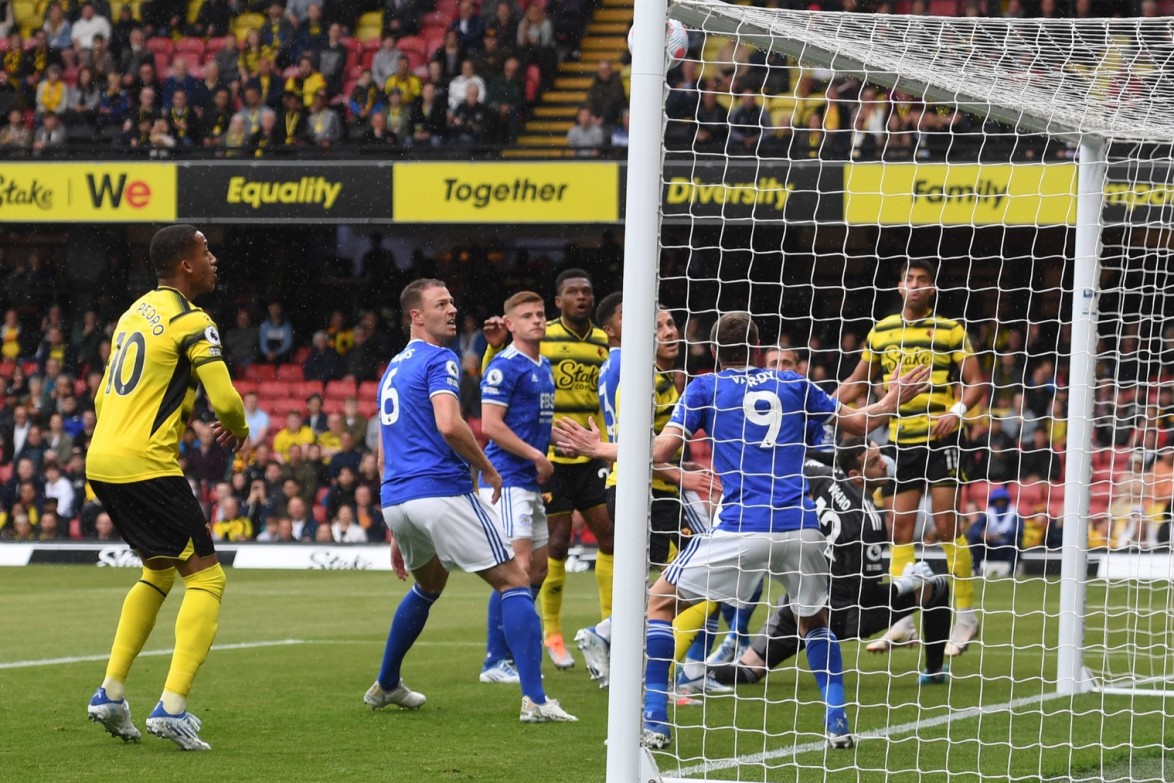 But the Foxes soon served a reminder of their quality, as Maddison tried his luck from distance, but the former Norwich man’s effort sailed comfortably over Ben Foster’s woodwork.

Maddison could make no mistake second time around however, when a home defensive mix-up saw the ball land to Tielemans through one-on-one, and the Belgium international teed up his teammate to make it 1-1.

And the visitors were in front just past the 20-minute mark, with Maddison this time turning provider and finding Vardy on the edge of the area, who beat Foster in the air to head home.

Dan Gosling had a great chance to level matters soon after the restart but narrowly missed the target with his curling effort from 18 yards, while back at the other end Foster was called into action to palm away a fierce Timothy Castagne strike. 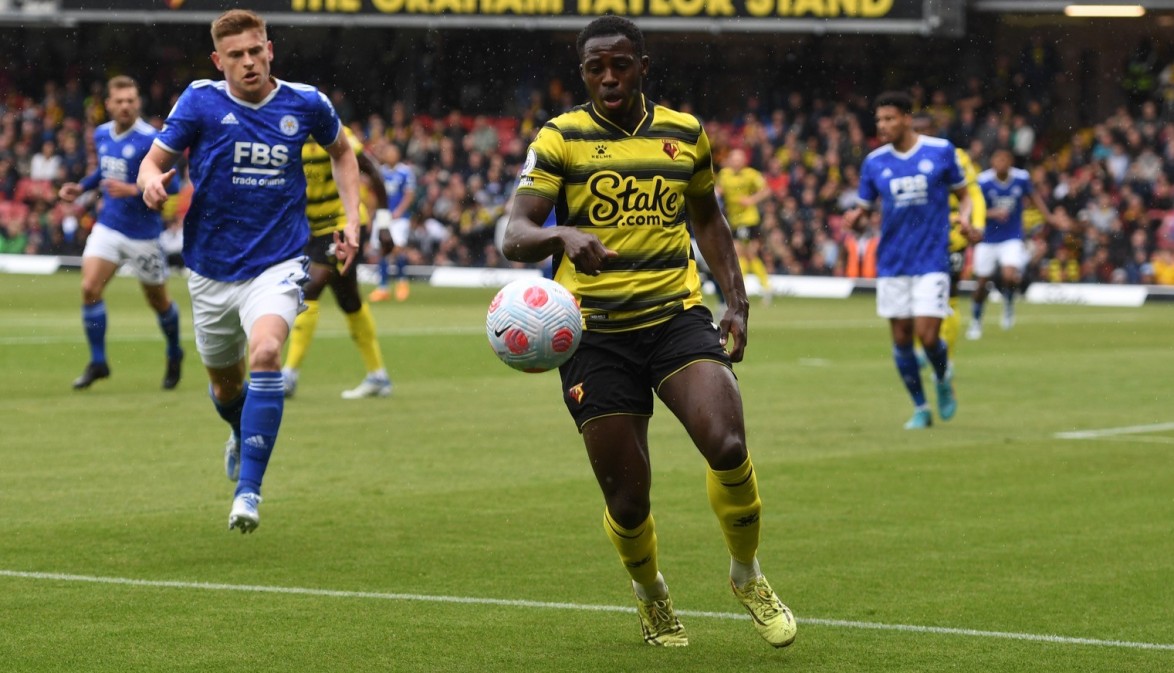 It took Leicester less than 30 seconds of the second half to double their advantage, with substitute Marc Albrighton picking out Harvey Barnes in space at the back post to tap in.

Albrighton and Barnes linked up nicely again seconds later with the latter this time not being able to get the better of Foster, and it was then Watford’s turn to attack with João Pedro shooting straight at Ward.

Kiernan Dewsbury-Hall looked to add a fourth for Brendan Rodgers’ men with a fizzing shot just short of the hour, after Vardy had powered the ball off target having escaped the home defence in-behind.

João Pedro continued to impress in Watford colours and fired an attempt at goal after some good work from skipper Moussa Sissoko, but Ward was alert to pull off an acrobatic stop to his left. 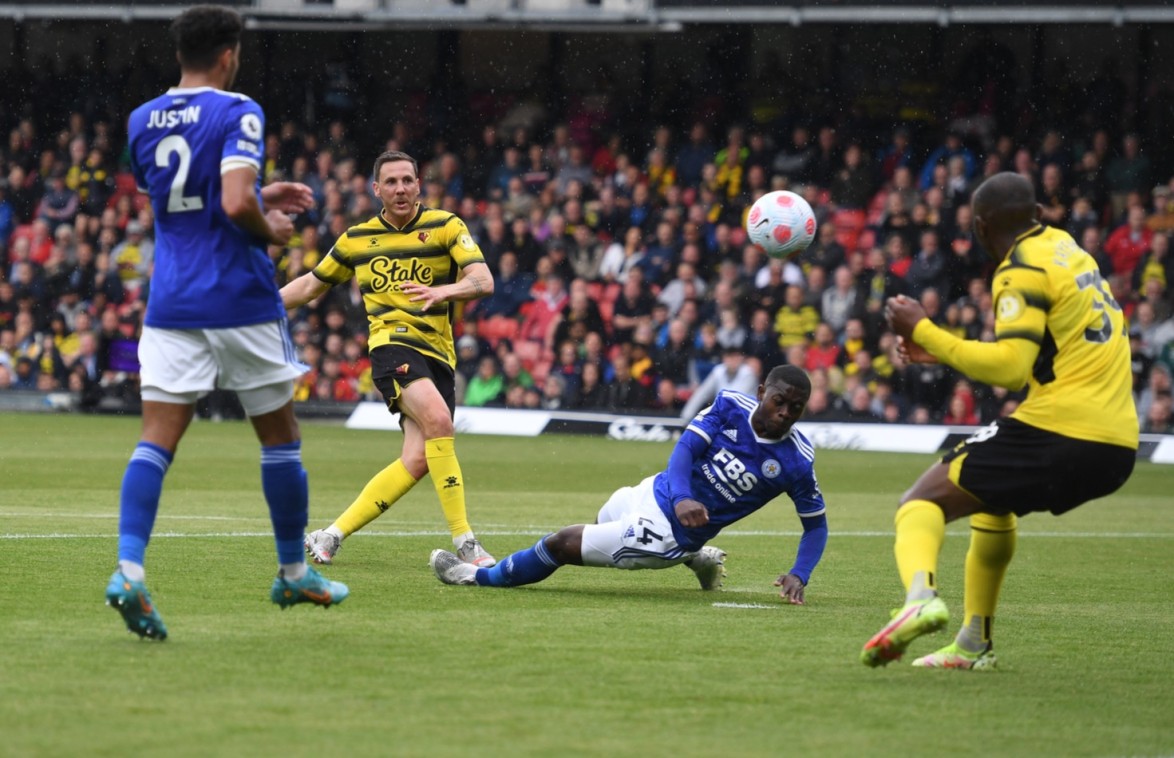 And the Hornets soon found themselves three goals down, with Vardy calmly rolling in his second after beating Cathcart to a long ball over the top in the 70th minute.

Christian Kabasele went close with a far-post header in the 77th minute as Watford refused to lie down, following another João Pedro chance that had required another applaudable Ward save.

But Barnes put gloss on the scoreline five minutes from the end with a smart finish across goal, to put the result firmly beyond doubt and bring the curtain down on the Hornets’ home campaign.