Watford’s final game of 2021 ended in a disappointing defeat as West Ham United emerged 4-1 winners from a Bank Holiday clash at Vicarage Road.

Top scorer Emmanuel Dennis emphatically powered the hosts into an early lead with his eighth goal of the season, to put the Hornets on course for victory in their first outing since a trip to Brentford on December 10.

But quick-fire goals from Tomáš Souček and Saïd Benrahma reversed the scoreline ahead of the half-hour mark, while a Mark Noble penalty and a late Nikola Vlašić strike sealed all three points for the east-Londoners. 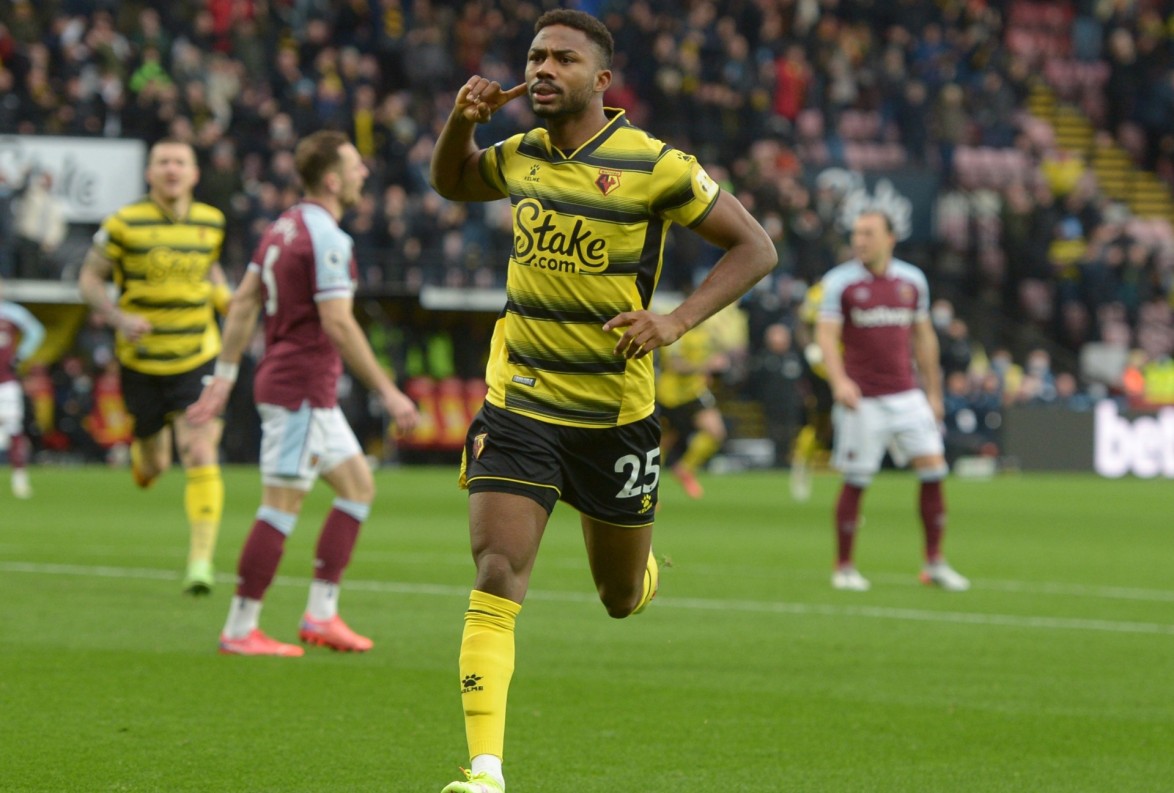 A clash against Tottenham Hotspur at The Vic on January 1 offers the Golden Boys an opportunity to quickly bounce back to winning ways, and Claudio Ranieri’s charges will be itching to kick 2022 off in style with a win to propel them up the Premier League table.

After an even start to proceedings Watford gradually took control of posession, and it didn’t take long for the home side to get their noses in front with Dennis firing in on the four-minute mark.

After escaping the offside trap to latch onto Joshua King’s clever through-ball the Nigeria international evaded a challenge from former Hornet Craig Dawson on the edge of the box before rifling a piercing shot into Łukasz Fabiański’s top-left corner to make it 1-0. 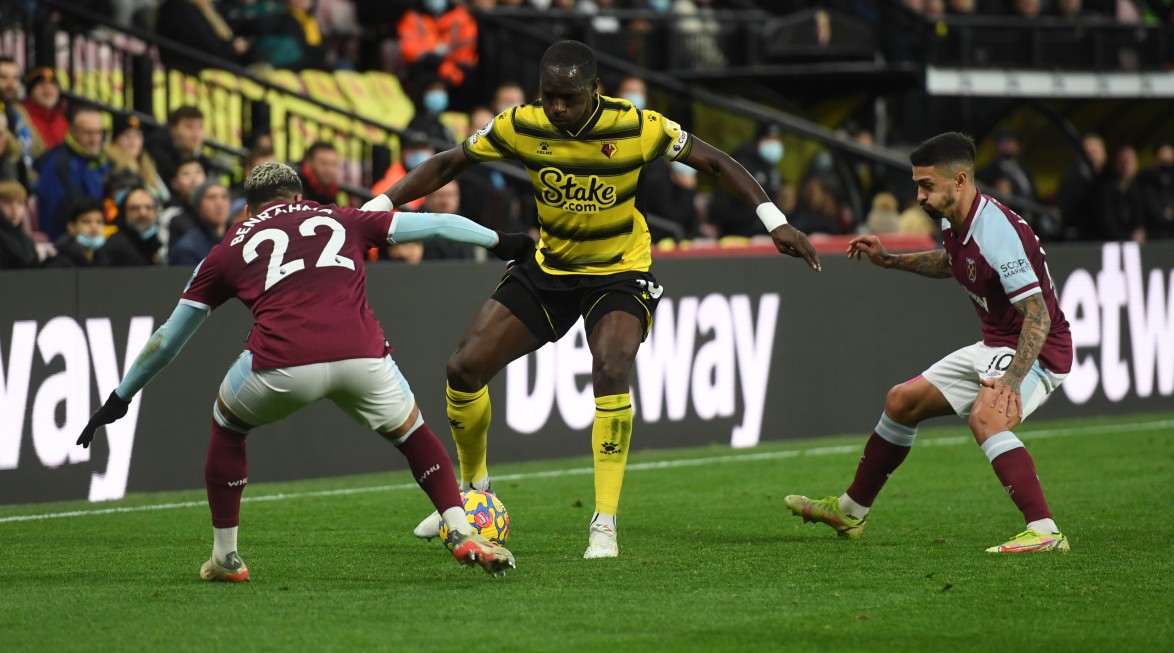 The visitors looked to hit back immediately after the restart but Jarrod Bowen’s scuffed effort couldn’t trouble Daniel Bachmann, though Benrahma did go close to notching an equaliser when his long-range effort rifled off the crossbar in the 10th minute.

Juraj Kucka and Adam Masina did well to snuff out further pushes forward from the Hammers, with the latter blocking a goalbound Michail Antonio drive in the 14th minute, while Bachmann comfortably collected a looping Manuel Lanzini cross moments later.

But as the away side continued to grow into the game their pressure eventually told in the 27th minute, Bowen picking out Souček in the home box who duly smashed a shot past Bachmann to make it 1-1. 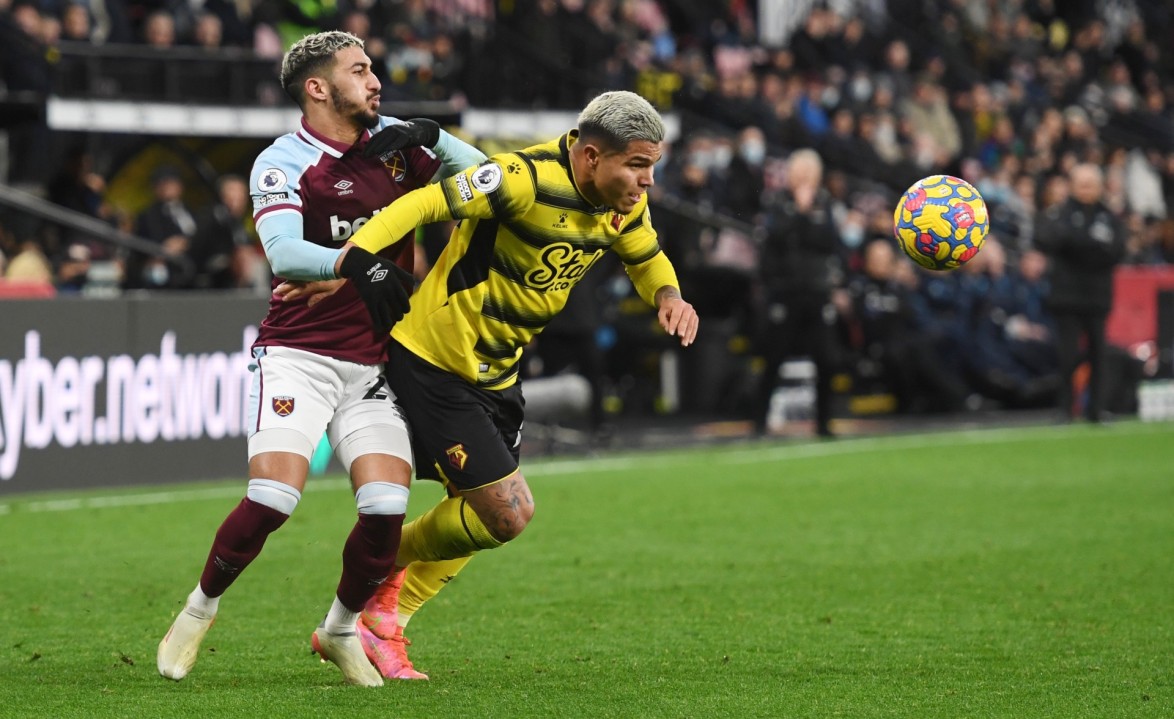 And West Ham completed the turnaround just two minutes later, with Antonio tricking his way towards the area down the left-hand side before finding Benrahma on the penalty spot, whose deflected shot found the target to put his team in front.

As the game ticked towards half-time Masina and the returning Francisco Sierralta spearheaded the Golden Boys’ search for a leveller with headed efforts towards goal, and Cucho Hernández also tried his luck from distance only to see his curling effort drift high and wide.

West Ham thought they had doubled their advantage in the opening stages of the second half with Bowen lashing home at the far post, but the 25-year-old’s effort was ruled out by referee Darren England after a VAR check for a foul on Dennis in the build-up. 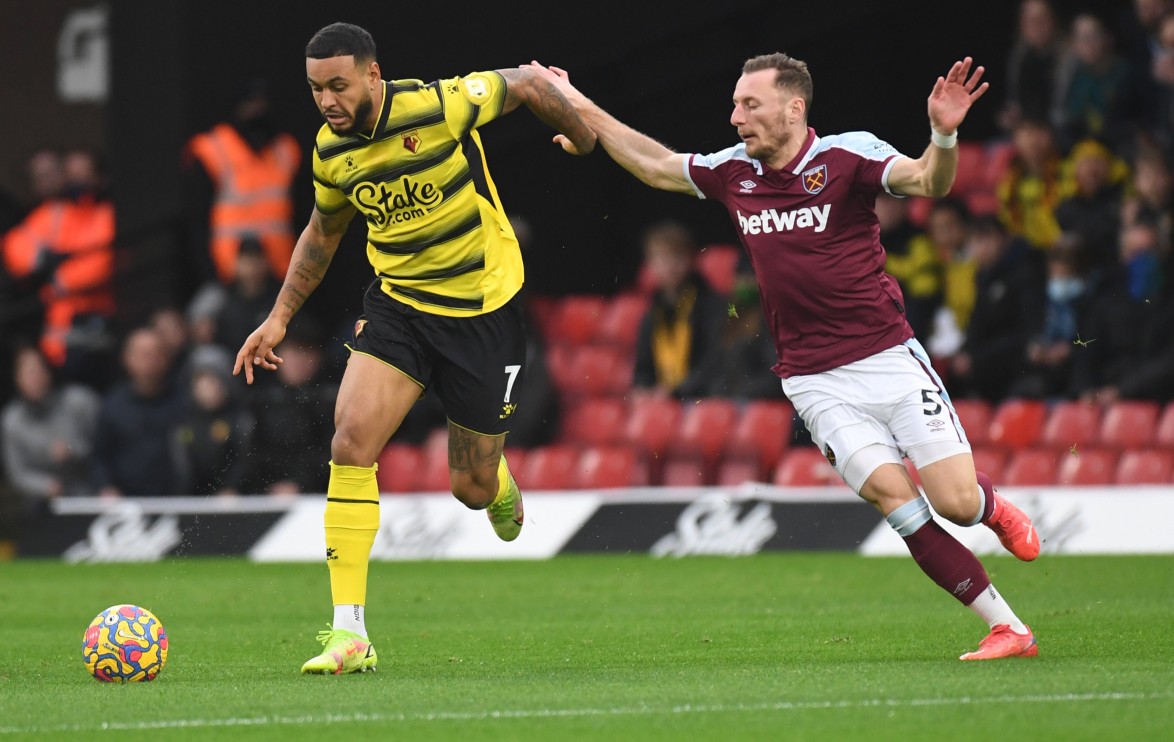 And the Hammers had to be on red alert at the other end of the pitch as Watford went close to a goal of their own moments later, with Fabiański called upon to palm away an on-target Moussa Sissoko strike.

A VAR decision then went in West Ham’s favour with the clock ticking towards the hour mark, with Bachmann judged to have fouled Bowen close to his goal, and away skipper Noble converted the subsequent penalty to make it 3-1.

King led Watford’s charge for a second goal of the afternoon and forced Fabiański into a save with little under 20 minutes to go, before heading towards goal without reward moments later.

Kucka narrowly missed the target with a fizzing header seven minutes from time as Watford refused to lie down, but Vlašić put gloss on the scoreline for West Ham with a close-range finish near to the death.