Ismaïla Sarr marked his 100th Watford game with his fourth goal of the season, and 28th in total, but the Hornets ultimately fell to a 2-1 defeat at the hands of Swansea City after Ben Cabango’s late winner at Vicarage Road.

Senegal international Sarr opened the scoring with a close-range finish 11 minutes before half-time, after some neat play on the wing by Ken Sema, and Yáser Asprilla went close as the Hornets finished the first 45 strongly.

Olivier Ntcham stung the hosts with a deflected equaliser not long after the restart, and after a prolonged break in play towards the end of the second half, Cabango struck in added time to steal the win for the South-Wales outfit.

After a crushing win over Stoke in his first game as Head Coach, Slaven Bilić will be looking for a quick response to this latest result back on the road at Blackpool on Saturday (October 8, 3pm KO), with the Golden Boys having slipped back down to 10th in the table. 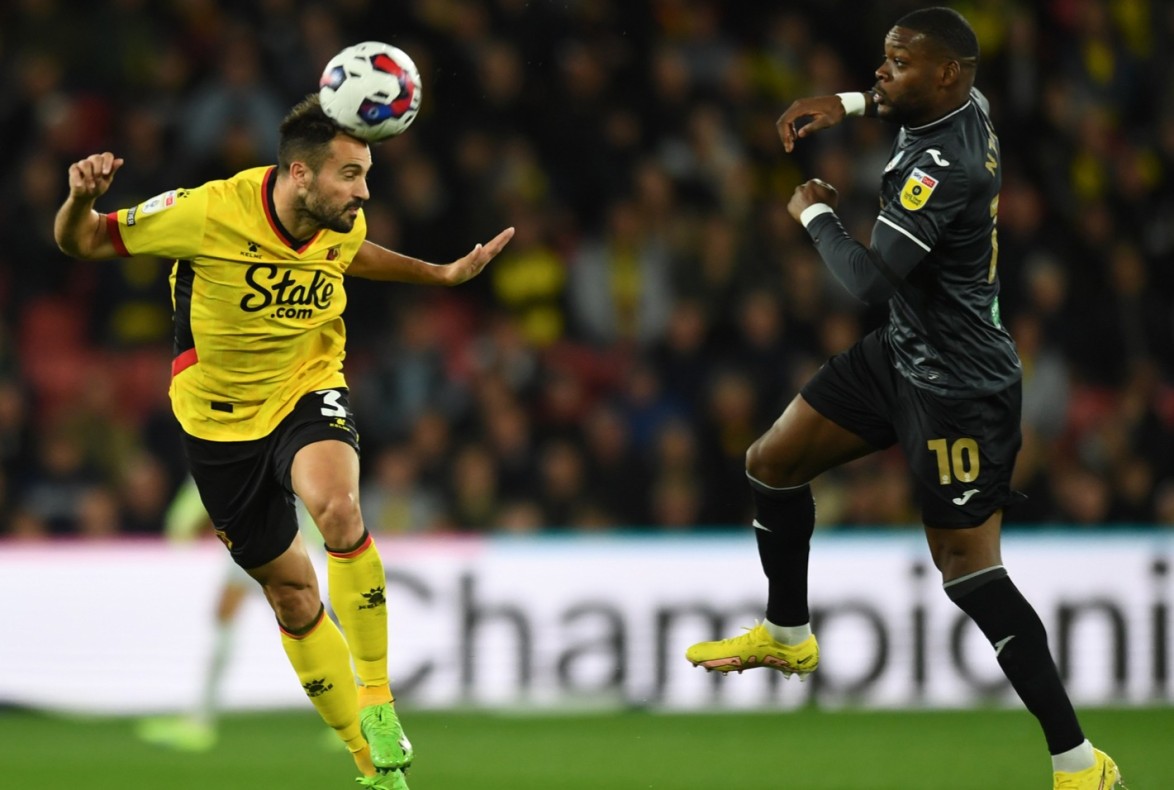 Bilić stuck with the same XI that had put four past Stoke on Sunday (October 2), with the only change to the squad seeing Mattie Pollock return to the bench in place of Kortney Hause.

The home backline was forced to defend a free-kick in a dangerous area in the opening stages, after a Hamza Choudhury foul on Ntcham, but the wall stood its ground to block the set-piece and snuff out the early danger.

A Ryan Manning shot served another sign of the threat posed by the Swans inside the first 10 minutes, though the offside flag was subsequently raised, but Watford gradually gained a feel of the ball, and enjoyed a period of possession around the quarter-of-an-hour mark.

Another foul on the visitors - this time by Sema on Matt Grimes - gave Jay Fulton a sight of goal from 25 yards, but the Golden Boys again weathered the storm until another Swansea free-kick from out wide called the defence into action. 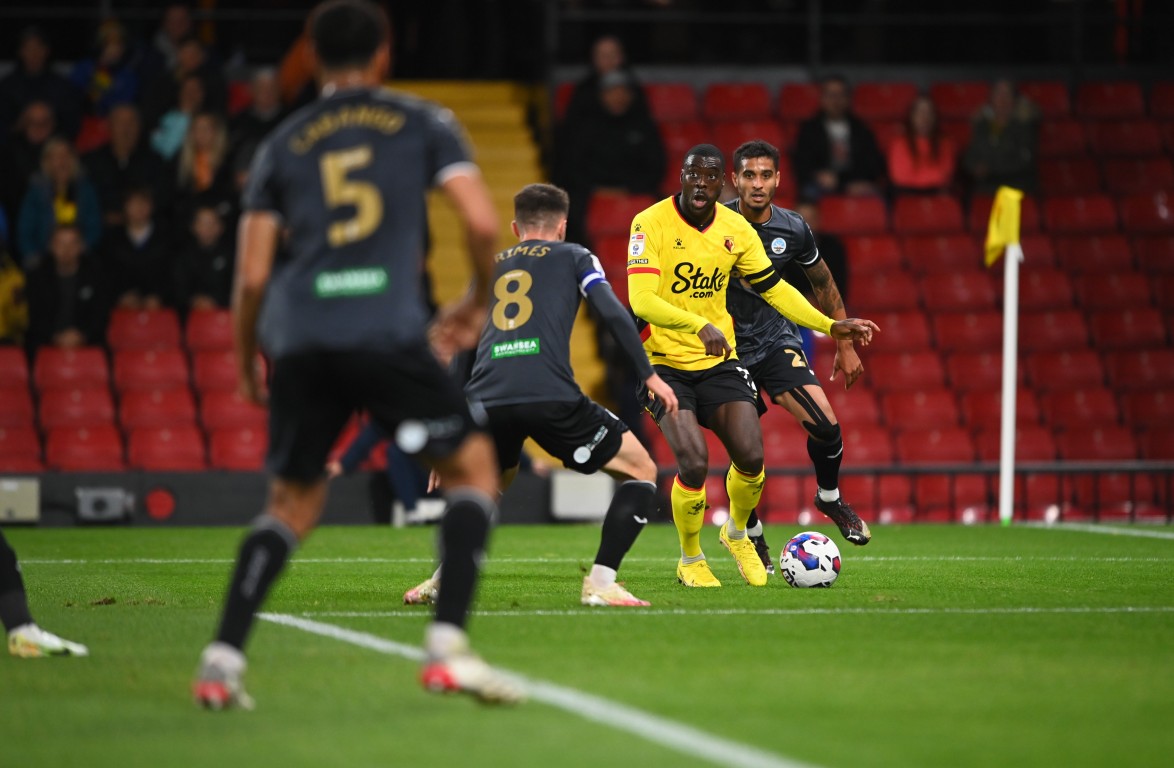 Keinan Davis enjoyed the Hornets’ first real sight of goal in the 31st minute, when a delicious ball from Sarr found the Aston Villa loanee, who worked his way towards goal before unleashing a left-footed drive that was parried by Steven Benda.

And it wasn’t long before the home pressure yielded the evening’s opening goal, with some silky Sema skill preceding a neat ball from the Sweden international, that teed up Sarr to fire home from close range and make it 1-0.

A succession of Swansea corners signalled the Welshmen’s desire for a quick response, and they duly thought they had equalised on the 42-minute mark when Michael Obafemi reacted first to a Daniel Bachmann save to slot home, but the strike was ruled out by the assistant referee’s flag.

A minute later it was almost 2-0 to Watford, with Asprilla doing brilliantly to snatch the ball off Kyle Naughton and round Benda, only for Nathan Wood to block what would have been the Colombian teenager’s first goal for the Hornets with a last-ditch intervention. 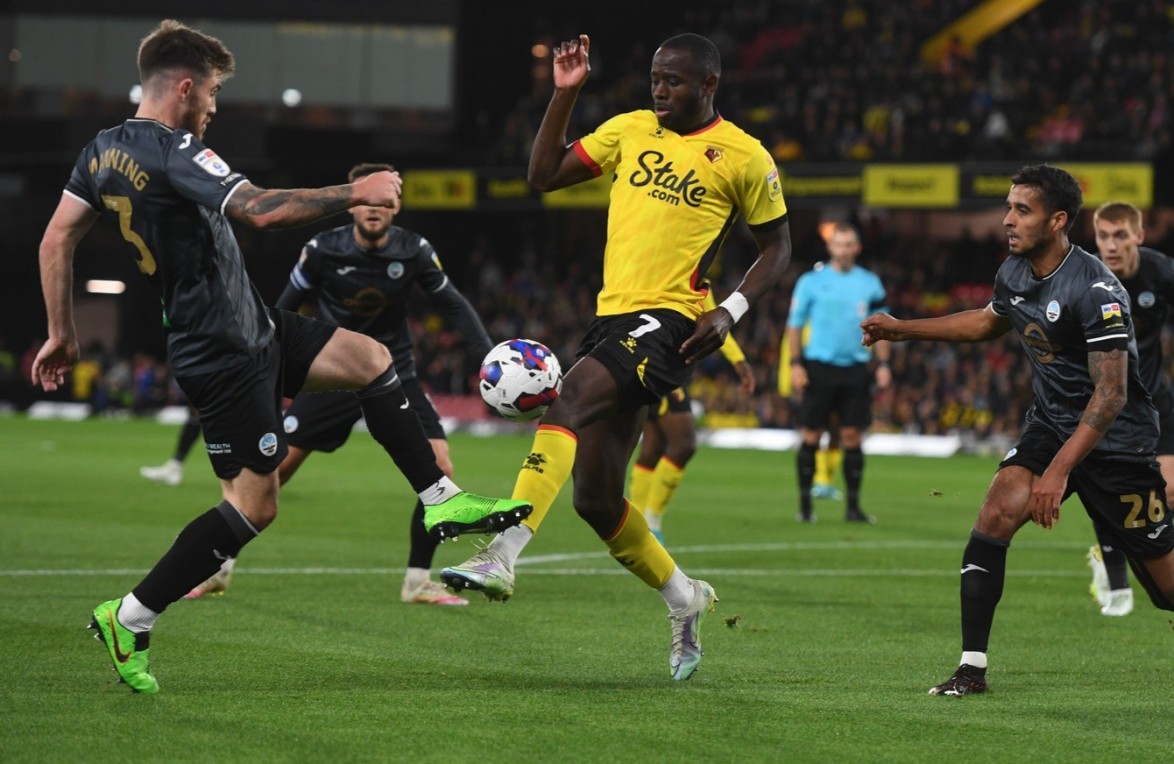 A speculative Ntcham strike from distance flew high and wide seconds before half-time, but Watford did have the last say of the first 45 when Sema looped a dangerous-looking ball into the box that Benda held well.

Both teams looked bright after the restart, while struggling to create any meaningful chances, but that changed in the 52nd minute when Ntcham unleashed a shot from the edge of the area that deflected off Christian Kabasele and past Bachmann for 1-1.

The Jacks saw an ambitious penalty appeal waved away, as they looked to capitalise on the momentum gained from their goal, before Imrân Louza came on to re-energise the home midfield five minutes before the hour.

James Morris was next to enter the field of play for the Golden Boys - making his Championship debut in place of the injured Mario Gaspar - and the youngster soon had a hand in the build-up to a Choudhury shot that bobbled narrowly past the post. 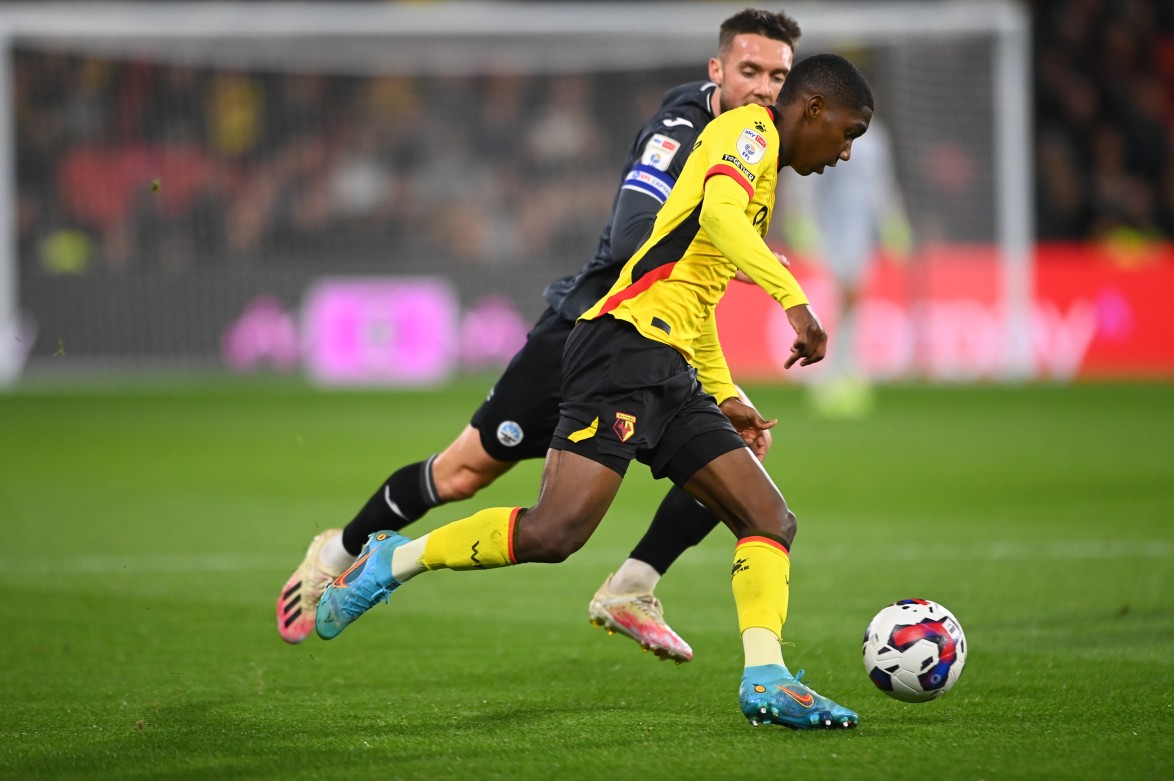 Back at the other end Manning flashed a fizzing attempt past the post, but Watford remained in the ascendency and Hassane Kamara was unfortunate to see his close-range effort denied after finding himself through on goal.

Mattie Pollock was the next Watford player to come on for his league debut in yellow, alongside striker Vakoun Bayo, before home appeals for a spot-kick were unfounded when Sarr was felled by Manning.

The game was temporarily stopped due to a fault with the officials’ communication system, and once restarted Swansea went on the attack, with Joël Piroe forcing Bachmann into a smart stop.

Seven minutes into the 17 added on to the normal 90 Swansea took the lead, with a teasing Manning free-kick finding Cabango in space, who stayed composed to head past Bachmann and make it 2-1.

The Vicarage Road faithful were dismayed when match official Tim Robinson refused to award a spot-kick for what the Hornets' players believed to be a handball with the clock deep into the red, and the final whistle soon sounded to condemn Watford to their third defeat of the campaign.