João Ferreira’s first goal for the Hornets earned his side a point, as Watford came back from a goal down to secure a 1-1 draw against Rotherham United at Vicarage Road.

The away side were first to strike as Shane Ferguson fired the Millers into an early lead, picking out the top corner from close range to startle the Hornets. And despite Ismaïla Sarr, Ismaël Koné and Matheus Martins’ best efforts during the remainder of the half, Watford went into the break a goal down and looking for a response.

Slaven Bilić’s charges almost made the perfect start to the second period, but Martins was denied by the woodwork. Moments later Watford did finally equalise as Ferreira converted with a long-range strike.

Although the Hornets ramped the pressure up in the final stages, the match ended all-square, with the Golden Boys travelling to the Riverside Stadium next Saturday (January 28) to face off against Middlesbrough in the Sky Bet Championship. 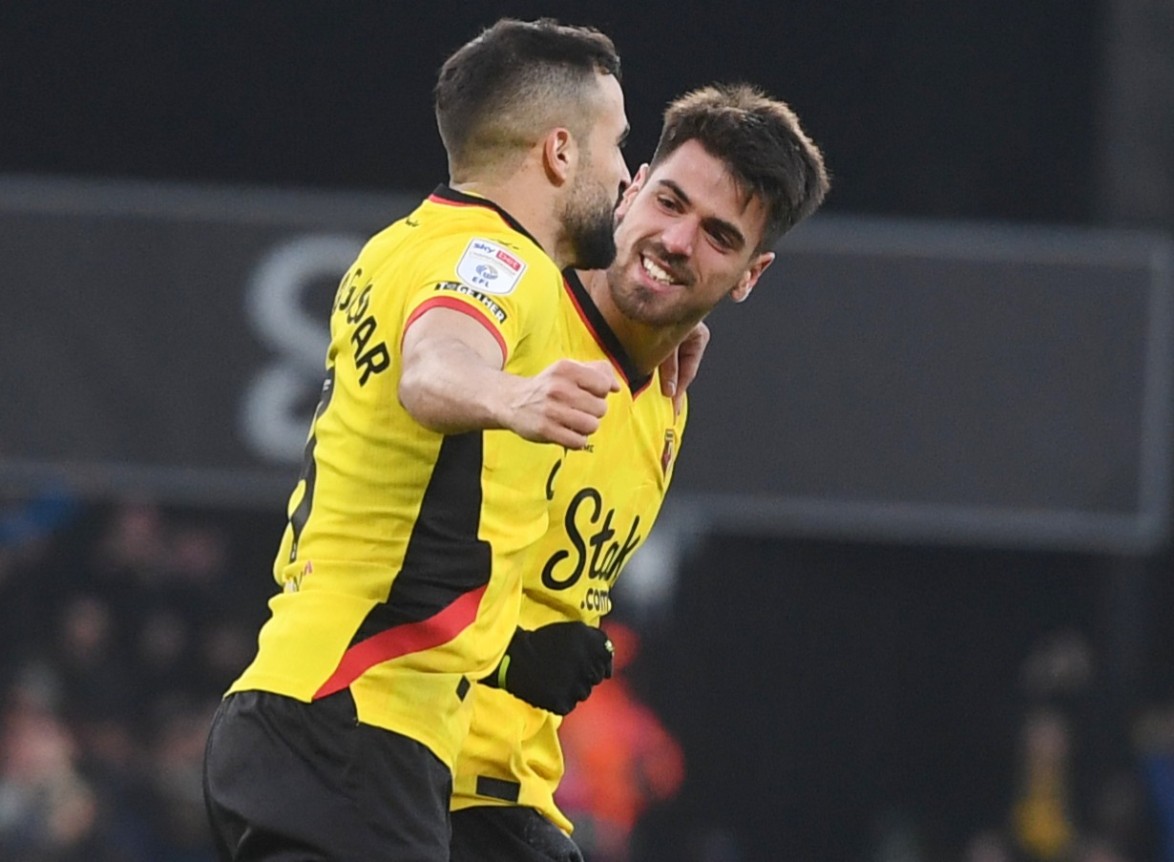 Head Coach Slaven Bilić made two changes from the side that beat Blackpool 2-0 last time out as January acquisitions Ferreira and Martins earned their first starts in yellow in place of William Troost-Ekong and the injured Jeremy Ngakia.

The Portuguese-speaking teammates began the match brightly as they worked on patterns down the right-hand side looking to wear down the Millers’ defence, but the first chance of the afternoon would break down the opposite flank.

Winger Sarr produced an impressive chipped through-ball to Mario Gaspar just inside the box and with the Spaniard on the turn, his volley clipped the post and went behind for a goal-kick.

Watford had to remain alert in defence however, despite the possession figures favouring them, as Hamza Choudhury reacted quickly to deny Leo Hjelde’s effort, with the resulting effort struck powerfully by Millers skipper Daniel Barlaser forcing goalkeeper Daniel Bachmann to parry away from danger. 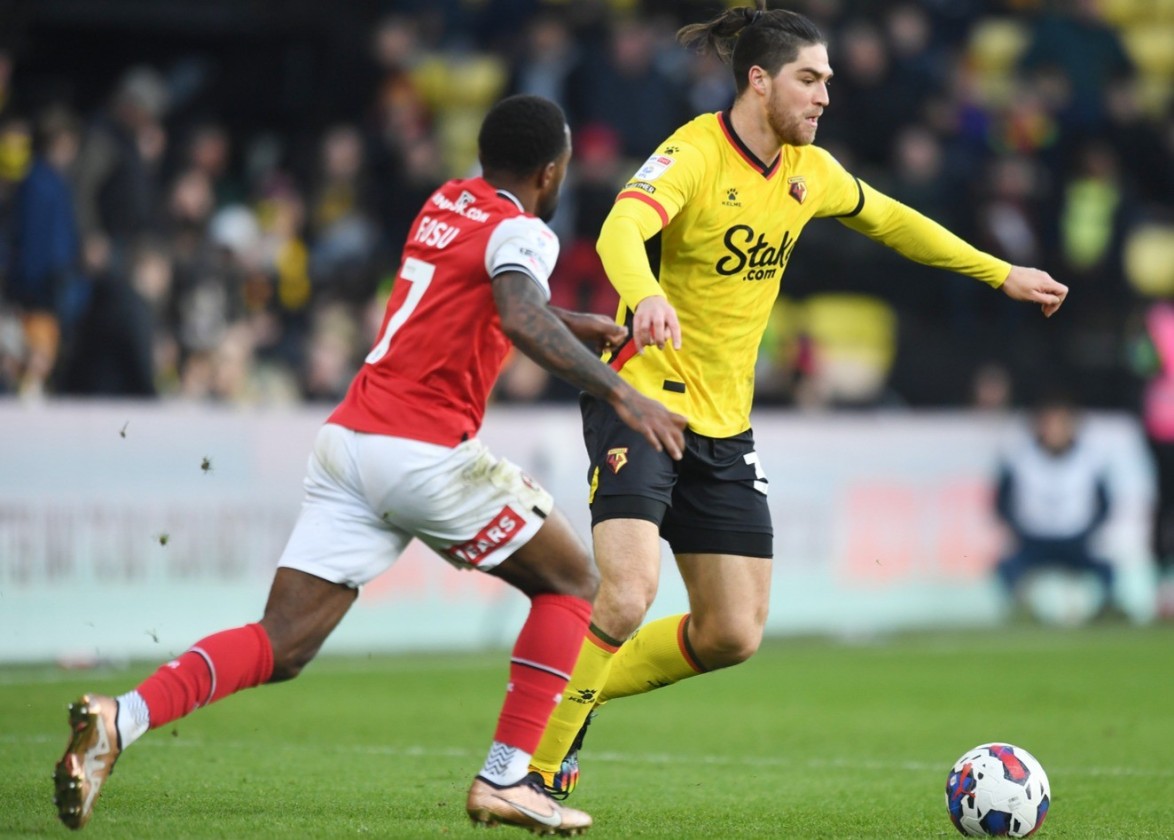 The visitors eventually broke the deadlock as Ferguson fired in from close range after Tariqe Fosu’s rebounded effort was parried into his path, giving the Millers a narrow lead.

Martins tried to reinvigorate the Hornets, hitting a nicely-placed free-kick which was met sweetly by Vakoun Bayo, but the striker could only find the roof of the net. More opportunities to level the score came as Ferreira’s curled delivery was volleyed over the bar by Sarr.

Continuing to force the issue, Martins was brought down by Oliver Rathbone just outside the box and despite Koné’s best intentions from the free-kick, the Canadian international fired into the wall twice and the ball was eventually cleared.

With Rotherham United frustrating Watford with their game plan, tempers flared just before the half-time whistle with Bachmann and the goalscorer Ferguson both shown a yellow card. It meant the Millers went into the break a goal up. 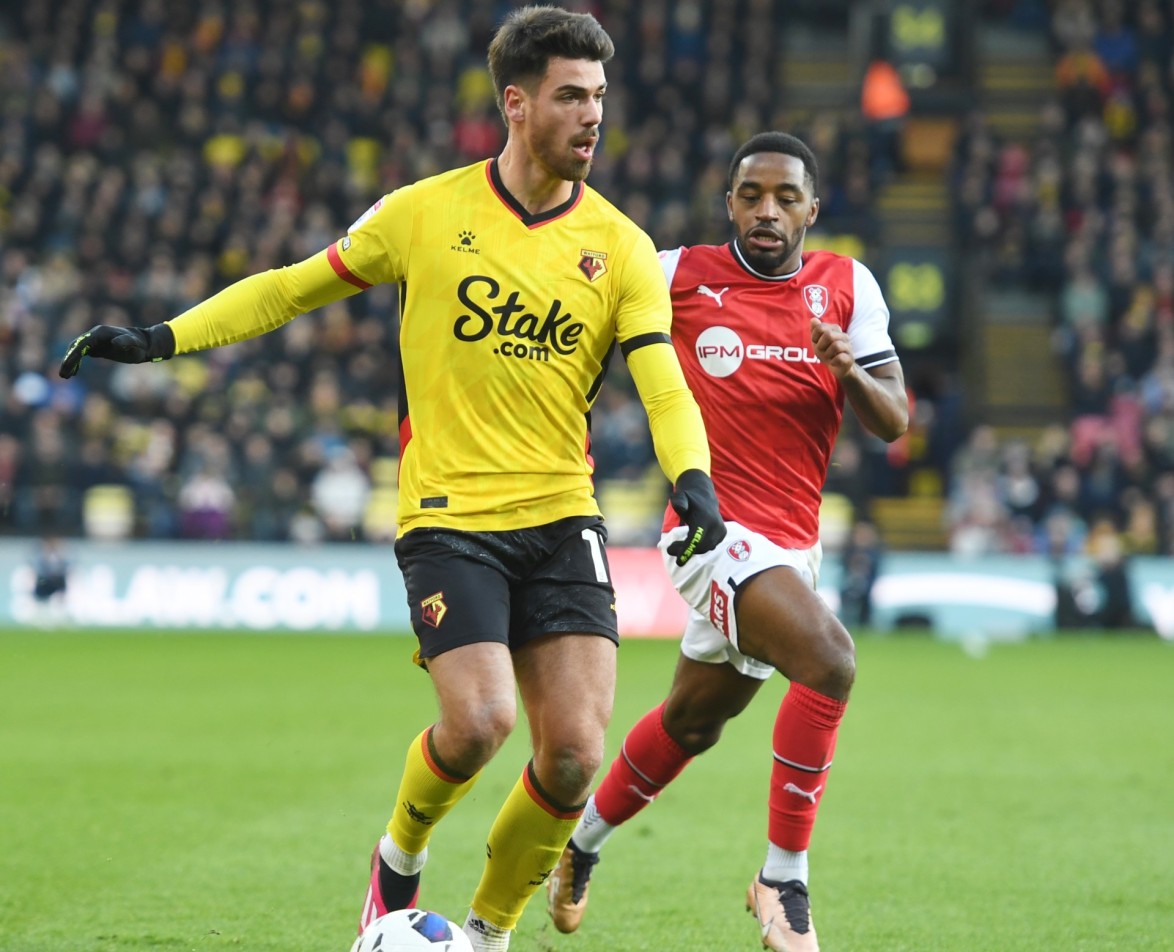 Bilić made a change at the break as Hassane Kamara returned to action for the first time since the defeat to Millwall on Boxing Day in 2022, replacing James Morris.

After the interval, momentum seemed to be flowing the way of the Hornets as Martins smashed the crossbar from close range. The well-worked move saw Bayo’s cross flicked on by Gaspar before reaching the Brazilian, giving the Watford faithful optimism for the rest of the half.

That hopeful outlook was soon realised as right-back Ferreira equalised, smashing in a low-driven strike from range with the chance having opened up for the Portuguese defender as Rotherham’s backline dropped off.

The Hornets kept coming as Gaspar had a powerful effort palmed away by Viktor Johansson’s right hand in goal for the Millers, after the adapted midfielder had the ball drop kindly for him. 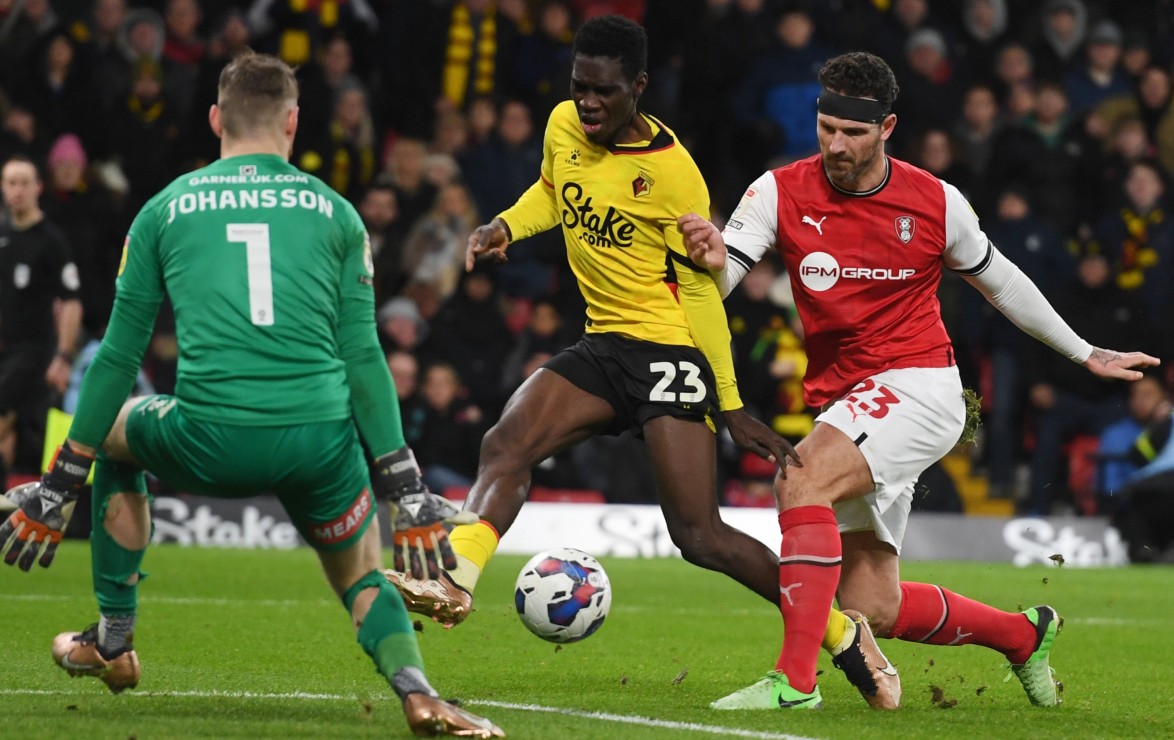 Heading into the final 20 minutes, 17-year-old Tobi Adeyemo was brought on to replace Bayo, with hopes high that he could repeat his goalscoring heroics from Blackpool, while academy starlet Michael Adu-Poku was also introduced onto the Vicarage Road pitch for his league debut.

Rotherham remained a potent threat on the counter-attack as Bachmann produced a brilliant stop to deny Fosu a certain goal from point-blank range, while down the other end, Gaspar volleyed onto the roof of the net.

Watford continued to search for the elusive winner with substitute Yáser Asprilla handed a golden opportunity as Sarr’s rebounded effort fell kindly for the Colombian, but the 19-year-old couldn’t get the ball out of his feet and struck a tame effort at goal, which would ultimately turn out to be the final chance of the match.