The Hornets’ players and supporters had waited 98 days for the Golden Boys to resume their Premier League season with this home fixture against the Foxes, but there were two seminal moments before a ball was even kicked this afternoon.

After walking out to an eerily quiet Vicarage Road, the players held a moment’s silence for all those affected by the ongoing coronavirus pandemic, before taking a knee on the referee’s whistle for Black Lives Matter. Both moments demonstrated unity between the teams and an understanding that some things, sometimes, must come before football.

But, when the football did get underway, it showed us just why we missed it so much. It was end-to-end stuff for 90 minutes and, just when it looked like the hosts had lost the match to a Ben Chilwell stunner at the death, Craig Dawson topped it with an overhead kick deep into injury time. 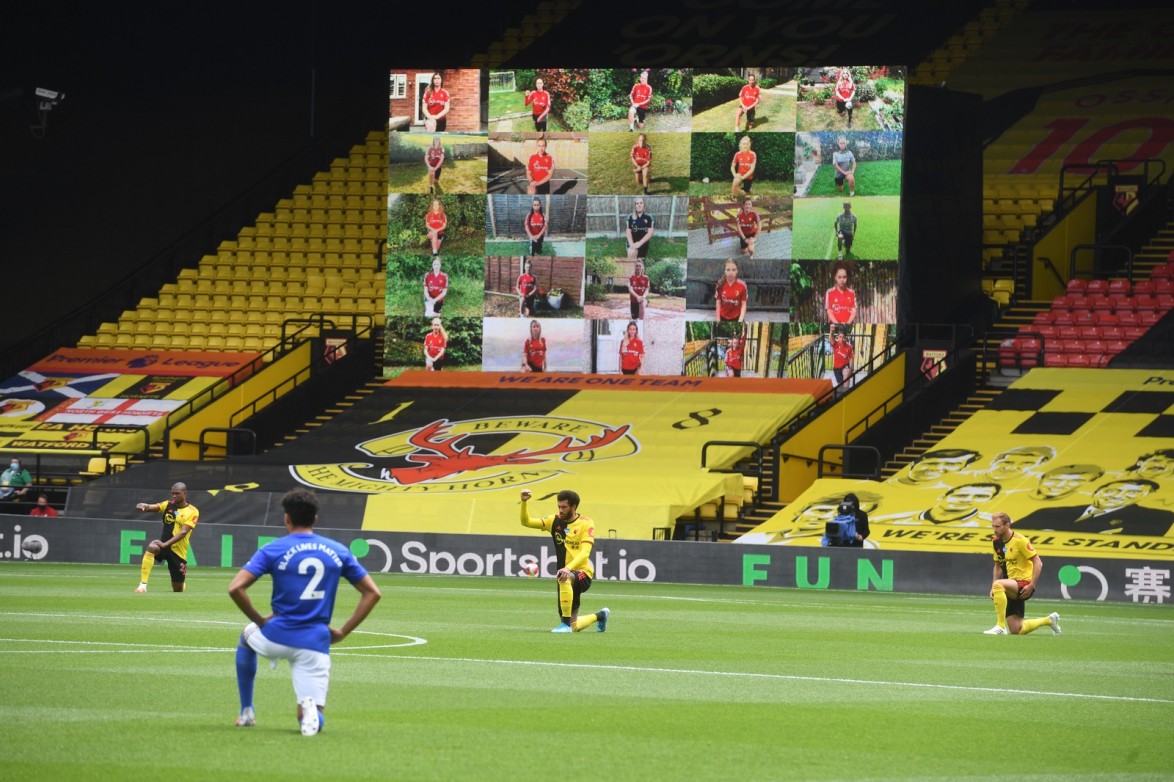 But the visitors quickly made their mark, with Dawson forced to block from James Maddison before Jamie Vardy’s shot was deflected wide.

Against their will, the Hornets were camped in their own half for the opening 20 minutes as Leicester searched for a way in behind, teasing balls over the top of Dawson and Christian Kabasele. Vardy was caught offside more than once, but there was a lurking danger that he might at some point time his run perfectly.

With a new drinks break arranged midway through each half the match was essentially played out in four quarters, and the end of the first came at a good time for the hosts. 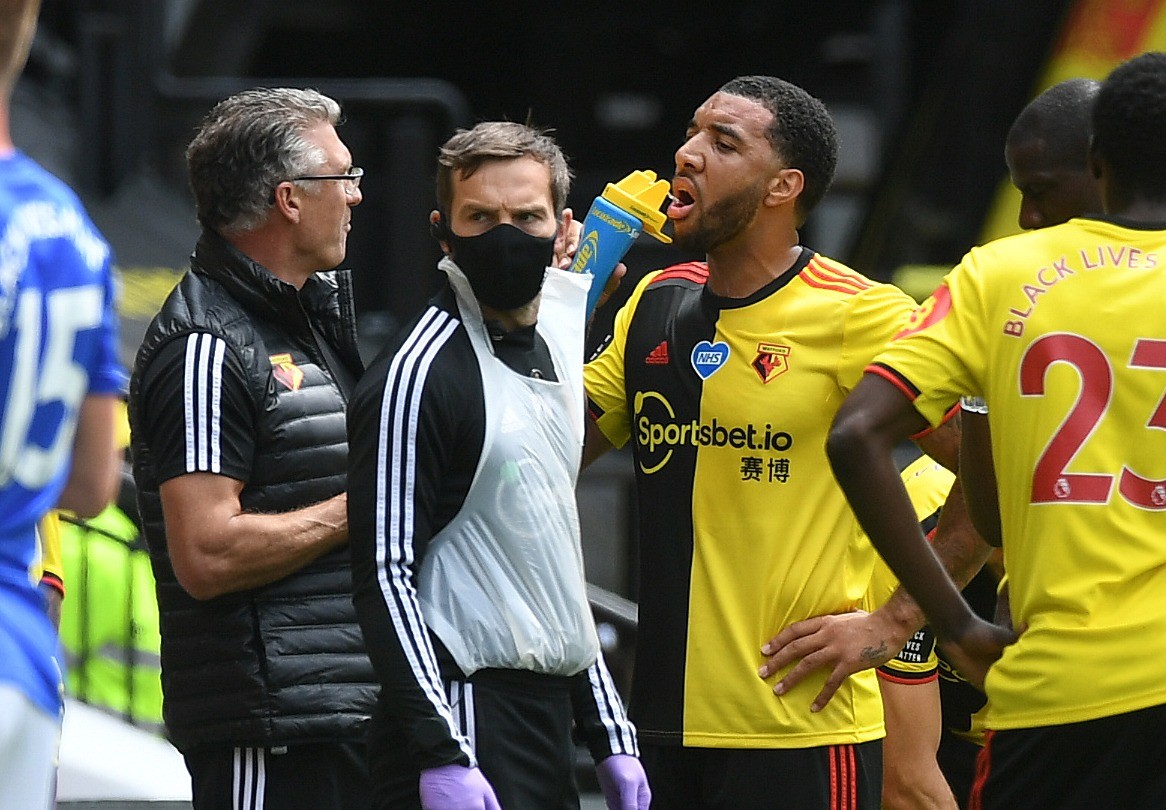 Rehydrated, Watford grew into the game, as both benches and the players themselves became more vocal as the half wore on.

“Will, beautiful,” yelled Ben Foster when Hughes won the ball back strongly in the middle of the park, spurring the midfielder on. “Go on, that’s yours!” he instructed Adam Masina seconds before the left-back closed down Marc Albrighton to prevent a cross into the box.

Watford edged forward and created their first real opportunities. Abdoulaye Doucouré had a shot over the bar before testing Kasper Schmeichel moments later. Seconds before the half-time whistle both Roberto Pereyra and Kabasele scrambled to get on the end of a deep cross but were unable to convert. 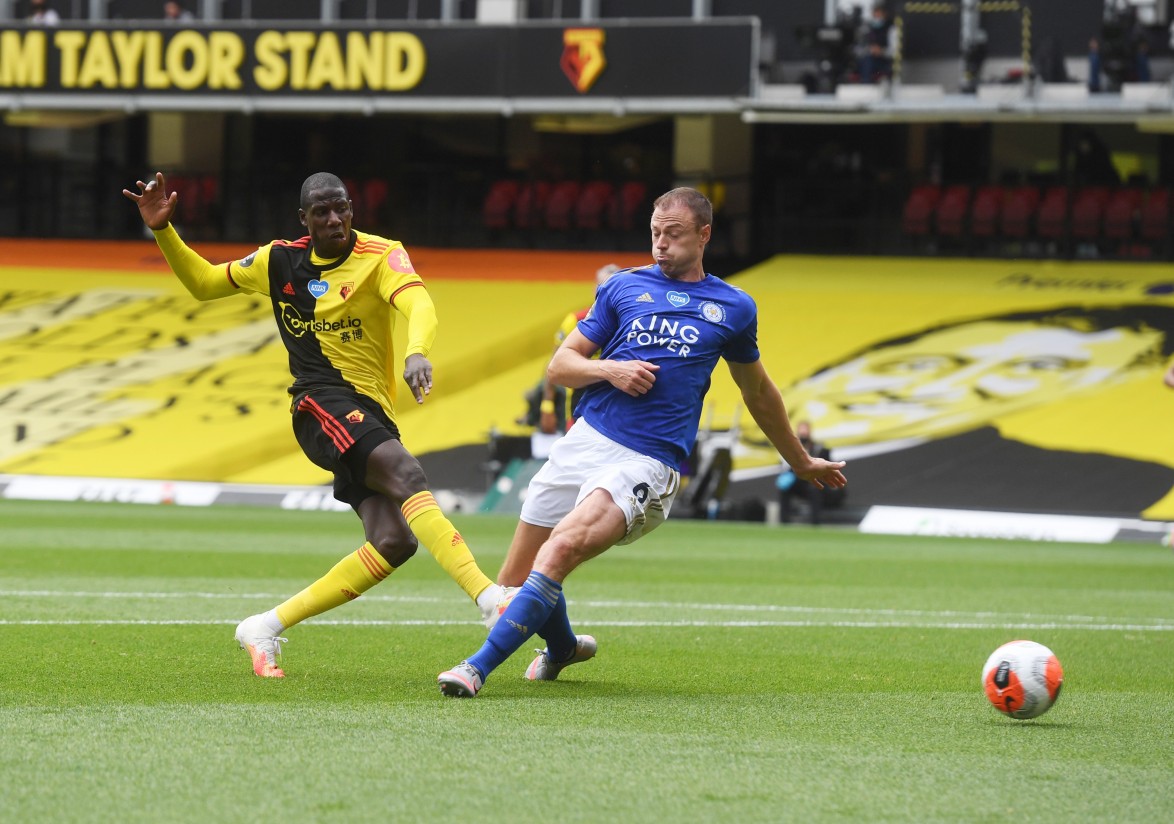 The hosts also came out firing at the start of the second half – or third quarter – and were inches from breaking the deadlock twice in within five minutes.

First Étienne Capoue sent Ismaïla Sarr through on goal only for Schmeichel to brilliantly save with his fingertips and deny the forward a similar goal to his second against Liverpool last time out at this stadium. Then Troy Deeney rose highest from a Kiko Femenía cross but saw his header bounce wide.

Minutes later, Pereyra tried his luck at replicating his stunner in this fixture three seasons ago but could only sting the goalkeeper’s palms from outside the box.

The new kind of atmosphere reached another level at the hour mark, as every tackle or chance was met with shouts of encouragement or dismay from each bench. You really wouldn’t want to drown it out with tinned crowd noise. 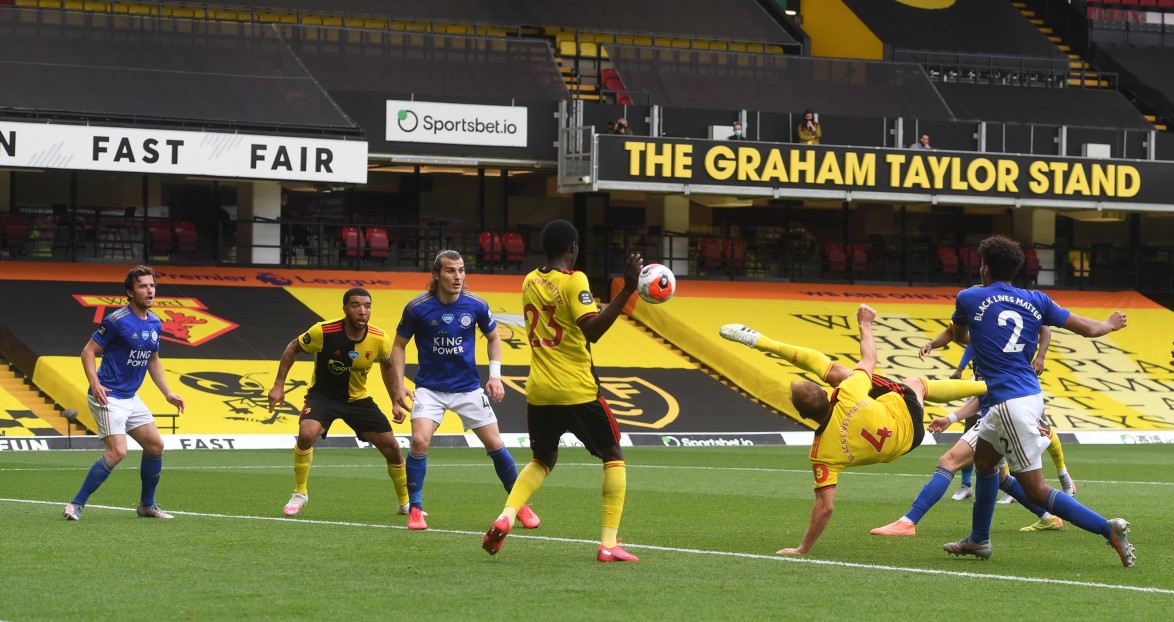 Leicester pushed back again and came close twice through James Maddison before, in the dying moments, the deadlock was broken, and match seemingly won, when Chilwell fired a shot sweetly into the top corner.

Even without a roaring crowd to cheer them on, the Hornets know how important these final nine matches are and would not lay down and take the loss. Pushing forward deep into injury time, Dawson pounced upon a loose ball in the box and acrobatically fired a shot at goal which Schmeichel could not stop, despite getting a hand to it.

Rarely has a game which meant so much been played out in front of so few and no doubt Dawson and the team would have loved to celebrate with 20,000 supporters filling the stadium. But, as we all know, these circumstances will become the norm over the coming weeks. It’s definitely better than nothing.