Troy Deeney was in an extremely charitable mood this week, arranging match tickets to one extremely grateful fan who has had a particularly tough year. The warrior of a striker remains as ruthless and dead-eyed as ever on the field, though.

The captain revealed his penalty-taking technique after slamming one in at Birmingham and was nerveless and cold-blooded again here, calling David Raya's bluff and crashing one down the centre again, this time hard and low. You just don't save those.

It was his 137th goal for the club and he seems as hungry as ever. It didn't end up as a winning penalty this time, as it really should have done against a Brentford side who played nearly half an hour with a man less, and that's what will disappoint the captain the most. 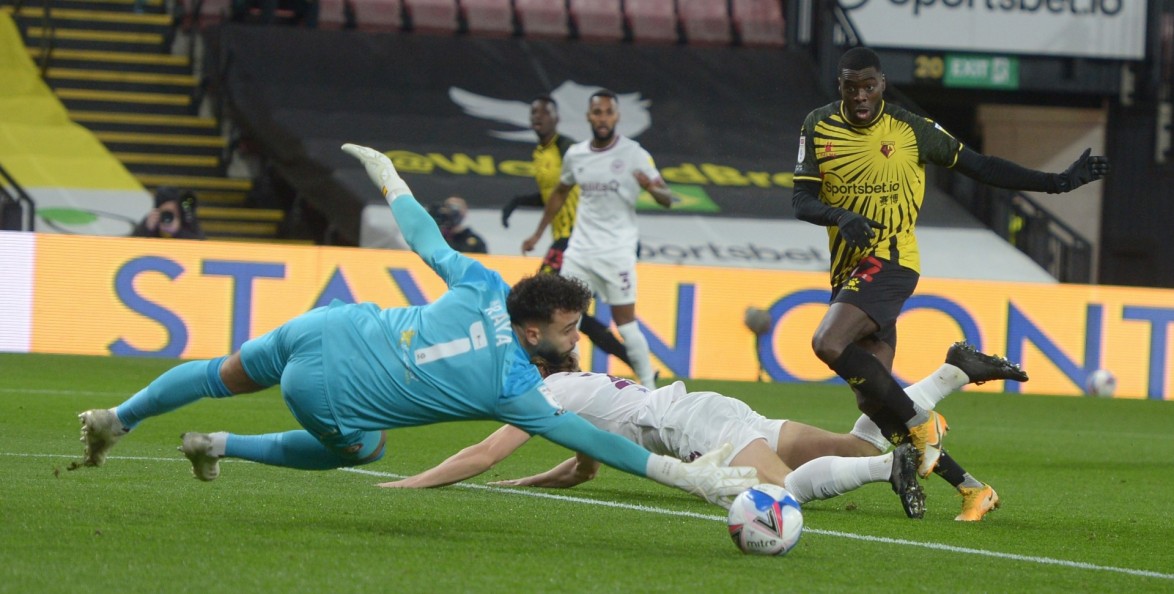 The fact it didn't was down to the concession of a penalty 240 seconds after Deeney had rattled one in bang on the hour and the fact the linesman incorrectly adjudged Stipe Perica to have been offside when he nodded in a certain winner late on. But the Hornets were outplayed in the first half and lucky not to be behind so a point was probably about right.

It meant honours ended perfectly even in the battle between fourth and sixth and between the master Deeney, with 84 Championship goals, and apprentice, the 24-year-old Ivan Toney who has blazed a trail at the top of this season's charts and added another to his tally here.

Brentford controlled the first half, enjoying 75 per cent of possession at one point and ending the half having been allowed to weave their pretty patterns with two thirds of the ball. Their Head Coach, Thomas Frank, will have wondered how his side didn't go in at least one goal to the good at the break.

Toney should have scored with a header after 17 minutes; hit the inside of the post with one he brilliantly curled past Ben Foster and then, along with Josh Dasilva, made a hash of a very good chance after the Bees opened the home side up two minutes before the break. 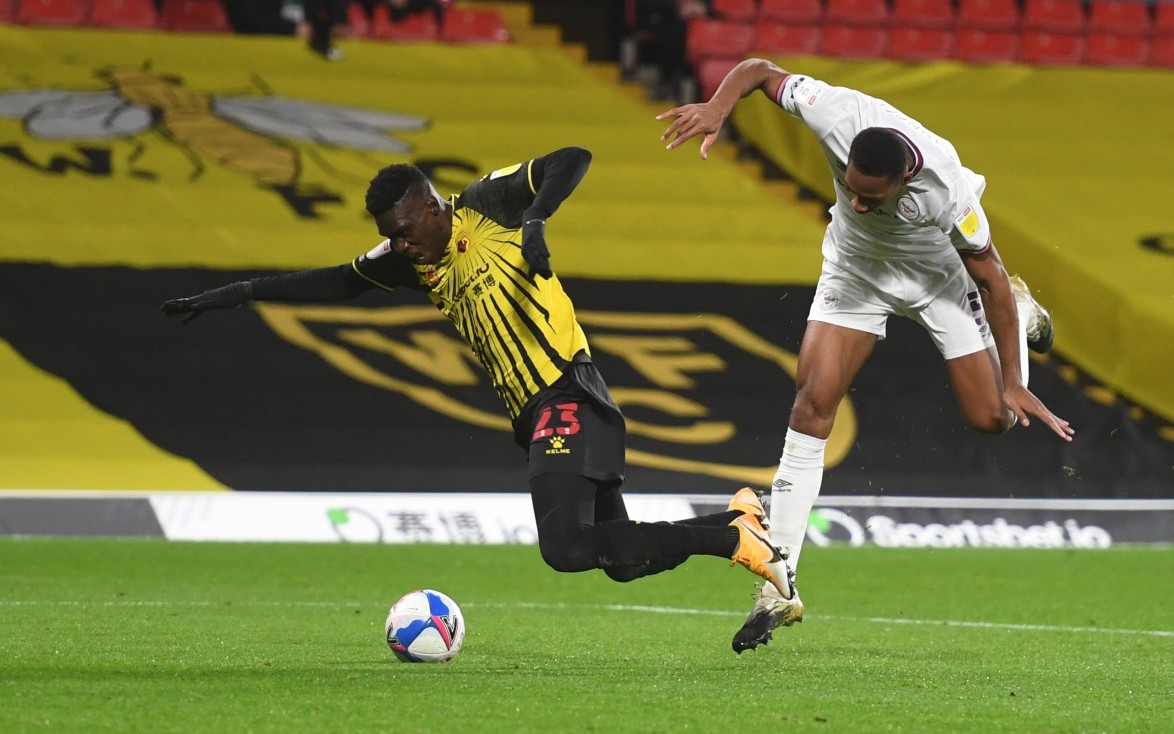 The Hornets had to be content to play on the counter-attack and look to set Ismaïla Sarr running free at the earliest opportunity. Tom Cleverley picked him out with two cross-field passes, the second being an absolute pearler. The home side's best and only real chance of the half fell to the Senegal international, Ken Sema finding his fellow wing man with a cross from the left after Troy Deeney had won a towering flick-on. Sarr received the ball and turned in one movement before firing off a low shot that Raya did well to get down and save.

The signs were a bit more promising at the start of the second half. Cleverley hit one from distance that flew wide and then made a terrific sliding tackle on Dasilva to dispossess for the former Arsenal youngster. There was definitely more intensity about the play in the ten minutes after half-time. Deeney got his first sight of goal, Kiko Femenía was a whisker away from sliding in Sema down the inside left channel and then Ngakia played Sarr through to win a penalty. It was the third he had won at the Rookery End this season, but the first that had led to a sending off, Ethan Pinnock seeing red for denying a goal scoring opportunity.

Deeney did the rest from 12 yards, slamming it hard and low, just right of centre this time to register his 34th successful spot-kick for the club. Toney opted for a different technique when he was presented with the same opportunity just three minutes later after referee James Linnington deemed Christian Kabasele had handled a cross fired at him from close range by Mathias Jensen. Toney casually approached the spot and side-footed it coolly to the bottom right. 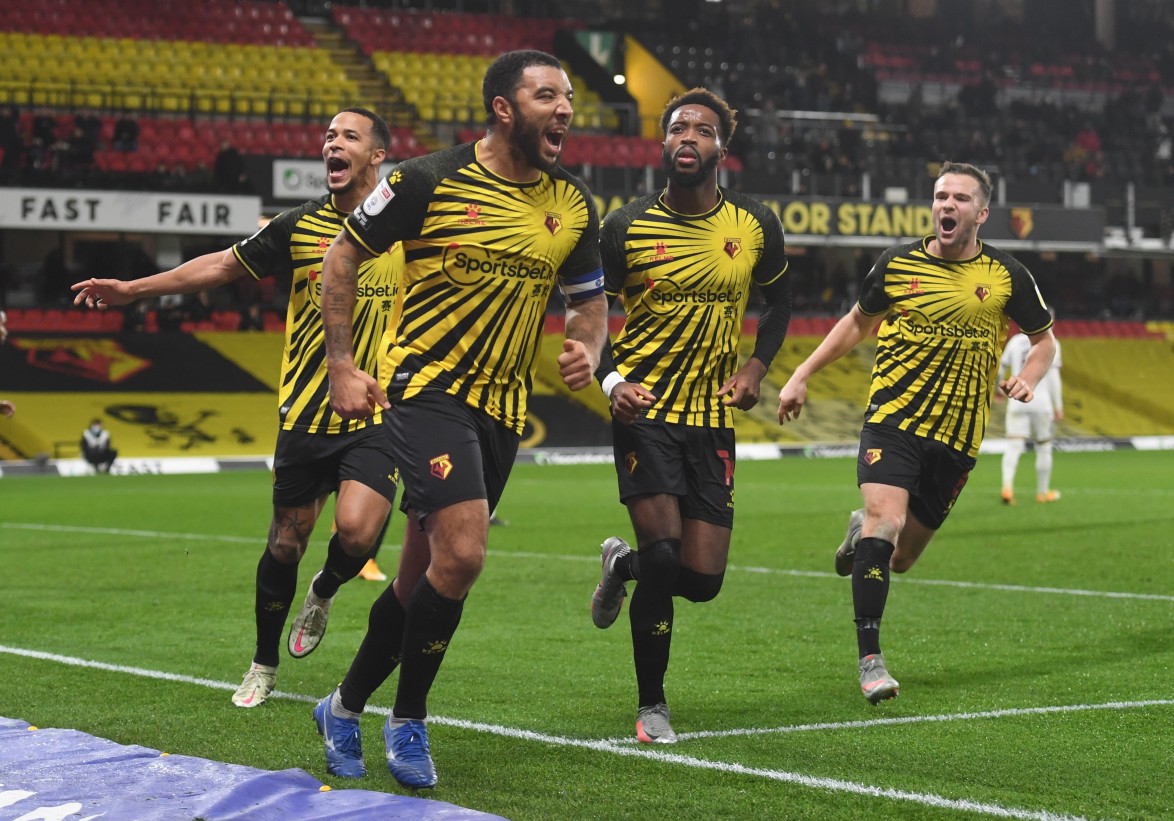 Now we had a fascinating game on our hands, one where ten-man Brentford had to go against their principles and largely sit back and play without the ball. With roles reversed, and the Hornets now in command of the ball and the territory, Ivić showed his hand and played trump cards Étienne Capoue and Perica.

Perica thought he had scored with a glancing header at the near post only for the linesman to flag the Croation offside, incorrectly the replays showed. Cleverley nearly muscled one in soon after, but it just wasn't to be and there was to be no late winner in front of a crowd probably this year. It was another point on the board and another small step towards that tally required for promotion.