After an entertaining first period, in which he and Emmanuel Dennis posed arguably the greatest threats to the away goal, the impressive João Pedro finished off a well-worked counter-attacking move in the 56th minute.

Daniel Jebbison and John Egan had among the best chances for United on an otherwise comfortable evening for the Hornets, and Ismaïla Sarr and new boy Rey Manaj both tried their luck at adding to their team’s tally late on. 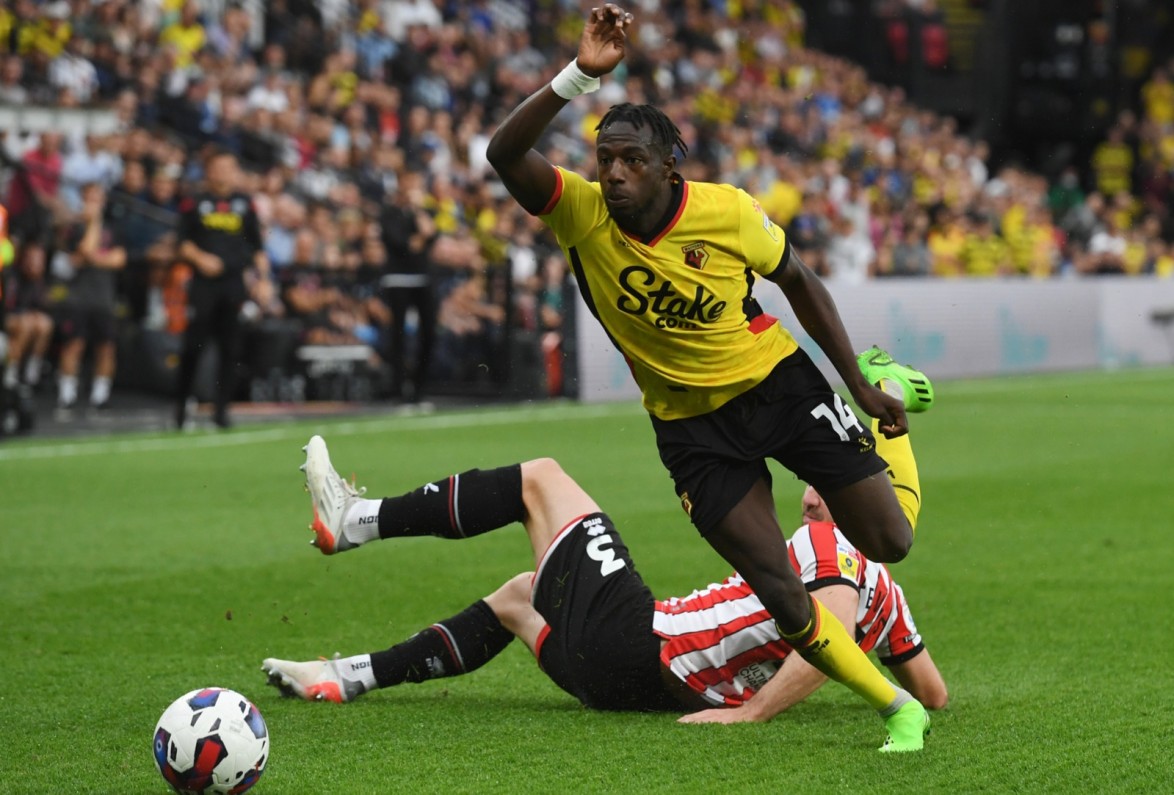 Edwards will likely be delighted with the result and the way in which his charges have seemingly adjusted to his preferred style of play, with the three points marking the perfect start ahead of a clash at West Bromwich Albion next Monday (August 8, 8pm KO).

The game started at a fierce tempo, with João Pedro and Dennis looking particularly sharp for the Hornets in the early stages towards the top of Edwards’ new-look 3-4-1-2 formation.

Indeed, it was Dennis who was the creator of the match’s first real clear-cut chance in the fifth minute, with the Nigeria international dummying clear of the visiting defence before finding the on-rushing Sarr, whose shot clattered the side netting.

Moments later Hassane Kamara showed his quality by beating Enda Stevens on the right by-line and winning a corner, as the hosts continued to look hungry for the evening’s first goal. 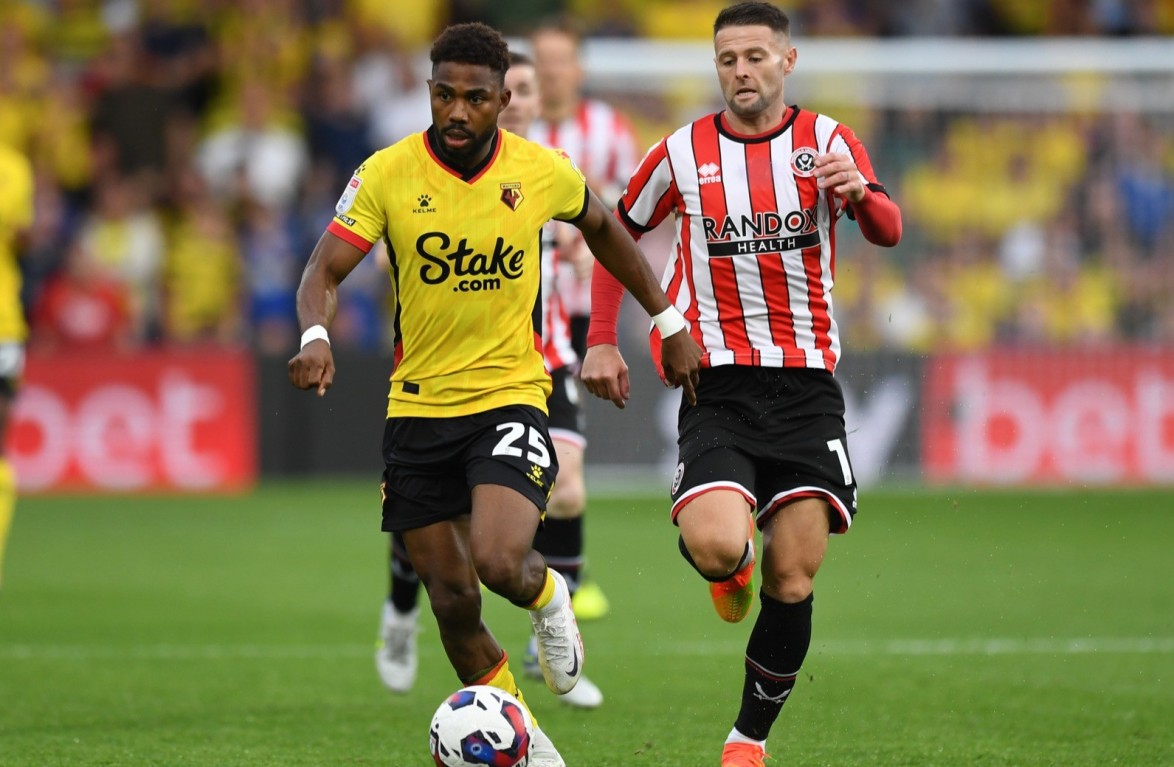 In the 12th minute Dennis was again at the forefront of a Watford attack, this time the 24-year-old winning the ball from Ciaran Clark only for his deflected shot to bobble up to away stopper Wes Foderingham.

A yellow card for Clark for a foul on Dennis with less than quarter-of-an-hour on the clock served as an indicator of the trouble Watford’s No.25 was causing for the Blades, and he again shot – albeit tamely – at Foderingham after being teed up by Sarr.

Daniel Bachmann got a hold of the ball for the first time of note in the 20th minute, with the 28-year-old comfortably holding Sander Berge’s effort, and Watford were soon back on the attack with Dennis heading safely off target.

Referee Josh Smith waved away Watford’s appeals for a penalty after Dennis was felled in the box with 23 minutes gone, and the man in the middle then booked Francisco Sierralta and John Fleck after an altercation between the teams following a Tom Cleverley challenge. 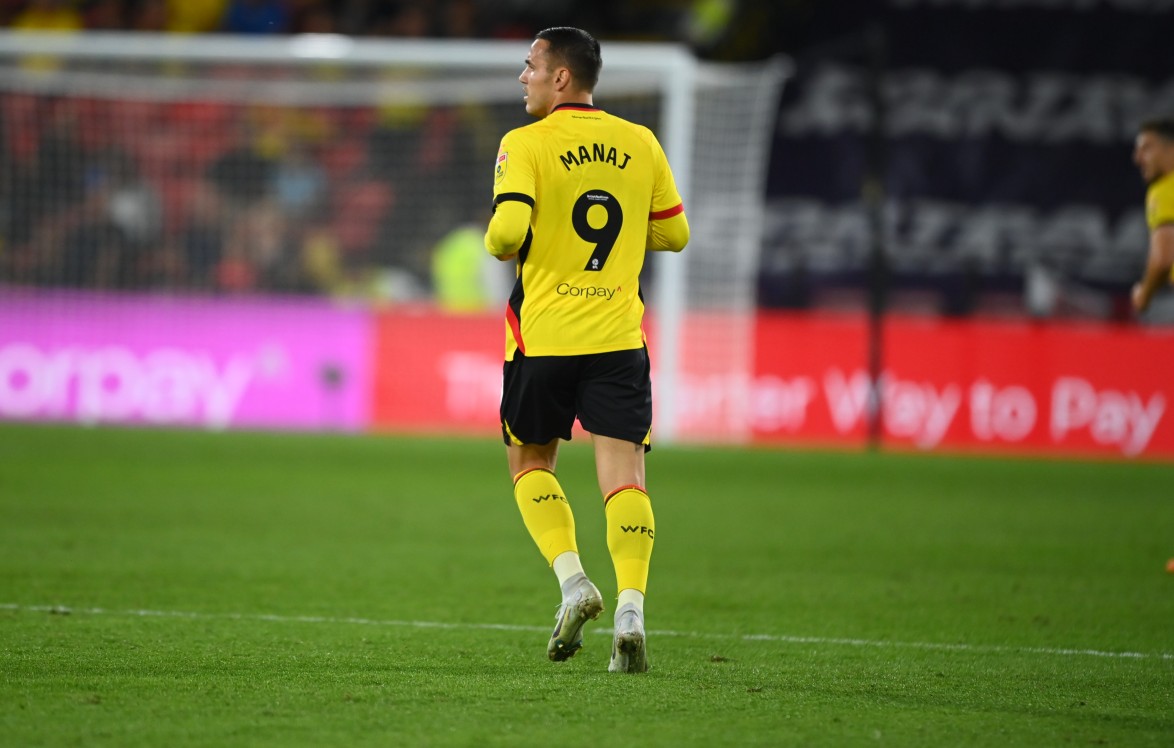 Clark had to be on red alert for United moments before the half-hour after a clever João Pedro ball almost released Ken Sema, but then down at the other end Bachmann was forced into a good stop as Iliman Ndiaye beat Kamara before firing from a tight angle.

The Hornets went close to taking the lead with little over three minutes left of the first 45 when João Pedro headed on target from a neat Sema cross, but the counter-attacking Blades had the last say of the half as Jebbison called Bachmann into action with a curling shot, and then skipper Egan steered a header towards goal.

The game continued in the same fiery vein after the break, with João Pedro becoming the fifth player to be booked by ref Smith for a challenge on Stevens before Egan was penalised for a tough challenge on the Brazilian.

But the Hornets retained their composure, and their efforts were soon rewarded. Kamara broke following a Sheffield United corner before the ball fell to Dennis who played in Sarr on the right, and the Senegal star squared to João Pedro who made no mistake from close range. 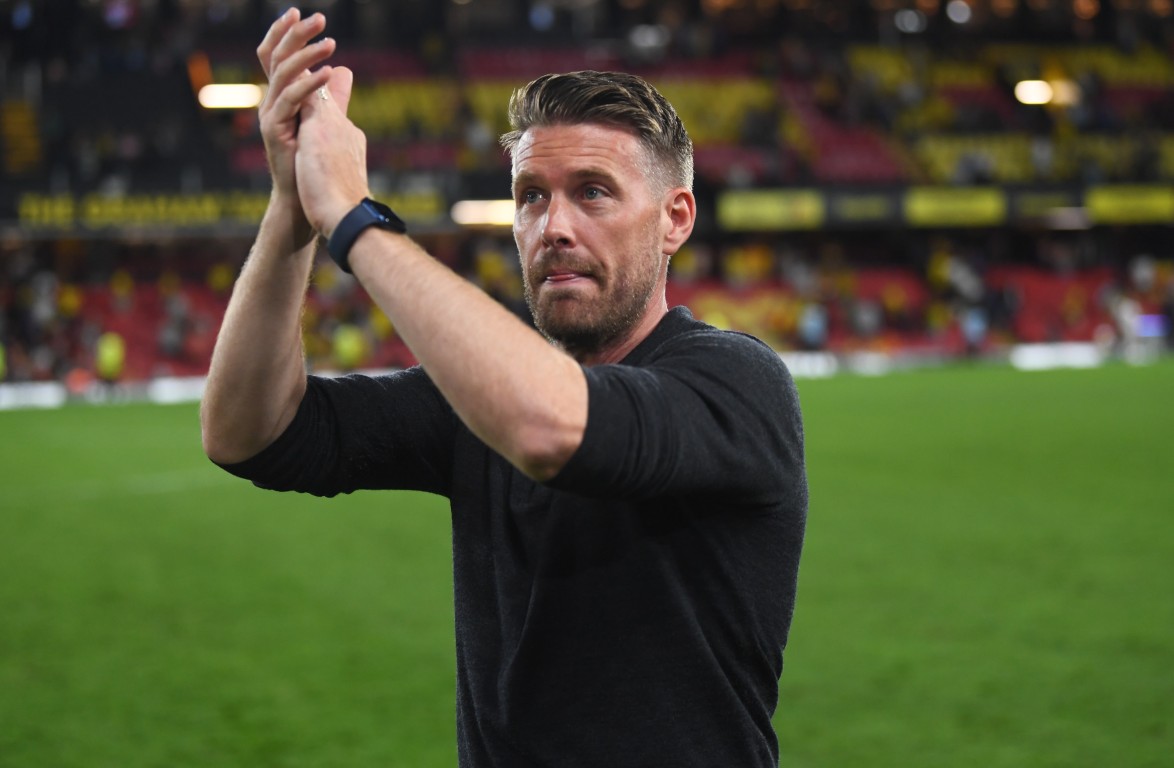 With their tails up the Golden Boys quickly went in search of a second, with Kamara volleying narrowly over from a João Pedro cross, and though United looked to respond Sarr rose highest to head a dangerous-looking corner clear.

Dennis again went close to grabbing his first goal of the campaign in the 65th minute after skipping clear of the visiting defence inside the box, only for Clark to produce a last-ditch challenge to prevent the shot.

Sarr shot high and wide with an easy-on-the-eye curling effort in the 71st minute as he too looked to open his account for 2022/23, before the 24-year-old made way for summer signing Manaj 10 minutes later.

Manaj looked fit and firing as he lashed a shot at Foderingham five minutes from time, after Egan had skewed a free header well wide for the visitors, and with six minutes of stoppage time played Watford held firm to seal a deserved opening-day win.