So, after more twists and turns than a water chute at an Orlando waterpark, this 38-game, 11-month season will go right down to the wire next Sunday.

It now all hinges on Arsenal away, and a couple of results elsewhere, as the Hornets aim to preserve their Premier League status for a sixth consecutive season. The stakes couldn't be higher, the tension couldn't be thicker and the plot more laden with drama. It's now a test of nerve as well as skill.

The last home game of the season, against a Manchester City side who have won the last eight games between these sides by an aggregate margin of 35-3, was always going to be the toughest of gigs. And so it proved. Pep Guardiola's team can be merciless at times, as we found at Wembley in May and the Etihad in September, but those watching at home were just hoping, praying even, for a repeat of the shock victory Norwich picked up over the defending champions earlier in the season.

Despite some honest huff and puff from the home side before the first drinks break, and a real commitment to the game plan, it never really looked likely. City scored twice in nine first-half minutes and plundered another double in three second-half minutes. It could have been more, and would have been had it not been for the outstanding Ben Foster. The Hornets were kind of lucky to get out of this one having conceded just four. City can do this to you, though: they have scored four goals or more 14 times in a game this season. 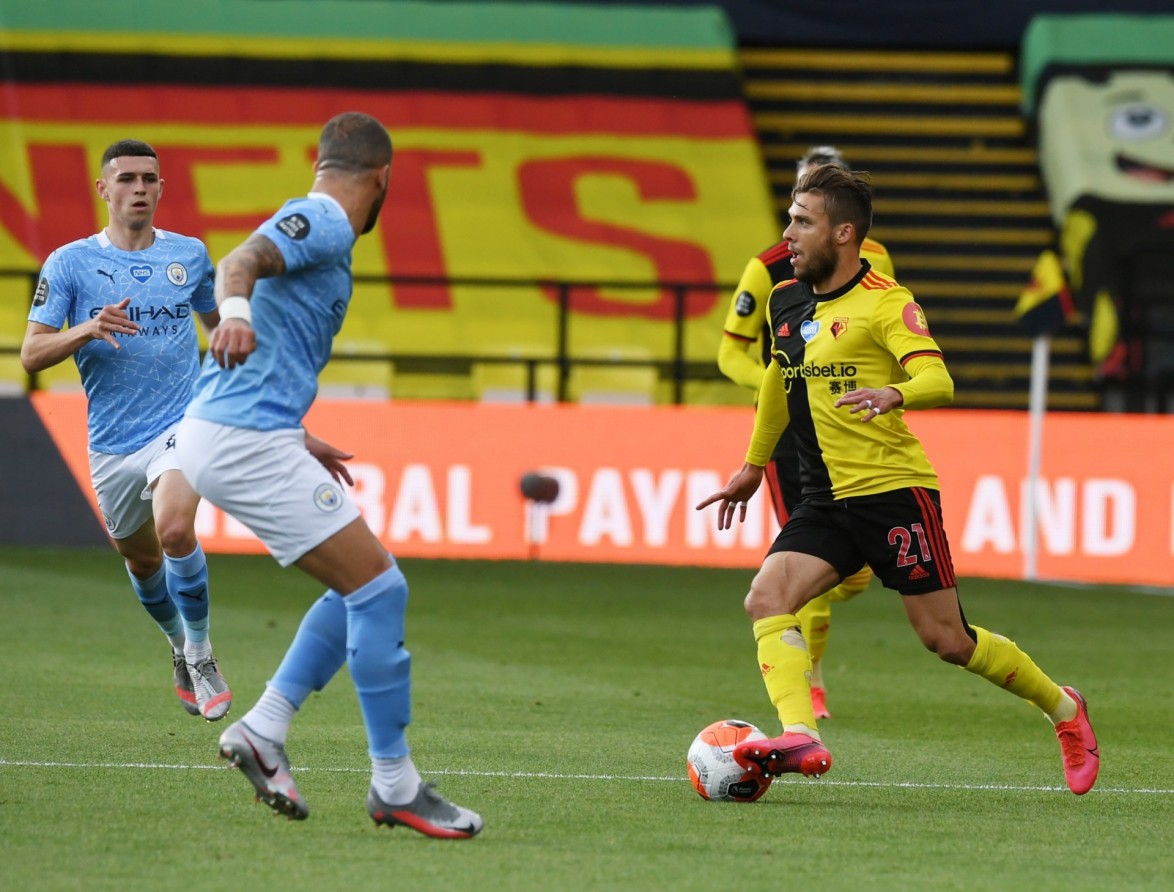 As example of the vice-like grip the slick visitors exerted on proceedings here, the Hornets had completed 55 passes by the hour mark. Rodri, the powerhouse in the middle of midfield, made 65 in the same period. It was extremely tough going against a freewheeling City side who rolled Riyad Mahrez and John Stones off the bench in the second half.

The Hornets had to be at full tilt throughout and hope City had an off day. The home side were, to their credit, at it early on, really at it, and produced easily their best start to a game since the restart.

The recalled Roberto Pereyra set the tone with a press on Eric Garcia and the rest followed him. You had Adrian Mariappa crashing into João Cancelo on the byline; Will Hughes thundering into Phil Foden; the irrespressible Tom Cleverley having two bites off Raheem Sterling and getting in the way of a shot from the England international; Kiko Femenía nipped in smartly on one ahead of Foden while Hughes made a very well-timed tackle on Kevin De Bruyne on the byline. It was a hugely promising start and they did very well to keep City largely at arms' length.

Foster was only really called into action when making another in a long list of remarkable saves, this time to palm wide a deflected shot from Rodri. Most 'keepers would have given up the ghost but not Foster.

The Hornets, as they would have expected, had to feed off scraps, the odd crumb from the top table City dine at, which is why Hughes was so disappointed not to make more of the snapshot he attempted after ten minutes following a long throw. There was another attempt on 26 minutes from Cleverley, but that fell into the speculative category. 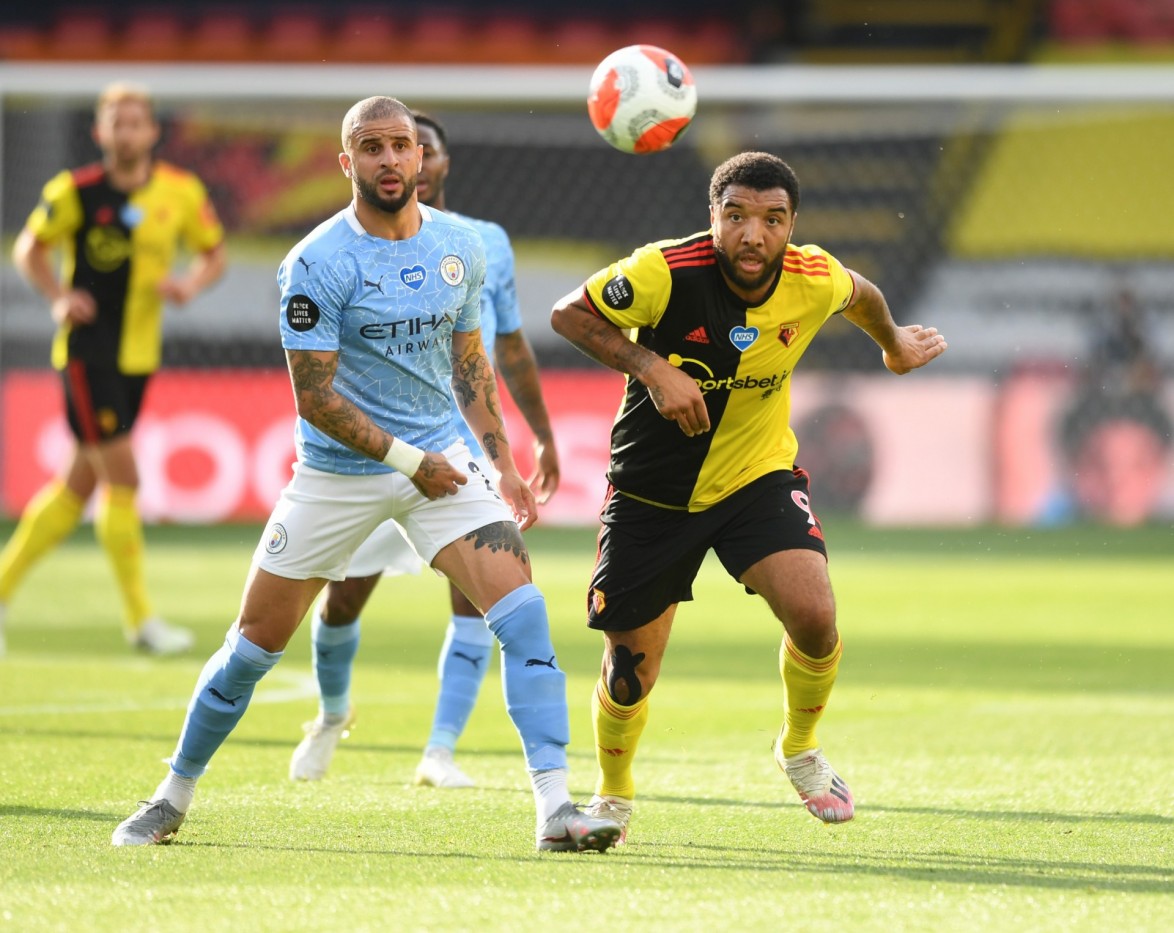 It was all going to plan up until the drinks break and then City, being City, moved up a gear or two and broke the deadlock with a cracker from Sterling on the half hour. Foster stood no chance, really. You wouldn't have fancied him much either from 12 yards ten minutes later when Sterling spotted the ball after a foul from Hughes. He somehow got a hand to a fiercely-hit penalty, but Sterling was on hand to tuck in the rebound.

There was a header Craig Dawson flung himself wholeheartedly at just before the break, but that proved brief respite and the team-talk at half-time was likely to have centred upon damage limitation and not ceding too much ground to Bournemouth and Aston Villa in terms of goal difference.

Any thoughts City would take their foot off the gas at the start of the second half were dispelled when Foster made two saves, from Gabriel Jesus and then Sterling, while Mariappa made a flying block to deny Bernado Silva inside the first two minutes of the second period. Foster was at it again just before the hour, making a breath-taking save to tip over a free-kick from De Bruyne. It was clear he was having one of those evenings when he denied Sterling from close range minutes after. It was just a shame Foden was at hand to tap in the rebound. That was harsh on Foster. He deserved better, much better from a performance like this.

Matters were bordering on cruel three minutes later when Aymeric Laporte headed one past the outstanding home 'keeper. The Hornets could have done with ending the game there on 66 minutes and then and moving on to next week. Thankfully, there were no additions to the scoreboard and there was no capitulation like there was at the Etihad. The team gamely stuck at it. They'll need plenty more of that, plus a bit more, on what is likely to be a nerve-shredding Sunday.