Watford fell to a first defeat in four Sky Bet Championship games at the hands of Coventry City, with Viktor Gyökeres’ second-half goal earning the Sky Blues a 1-0 win at a wet and windy Vicarage Road.

Both teams enjoyed promising spells throughout an evenly-matched first 45, with Gyökeres often the architect of any away pressure, and Ismaïla Sarr and Keinan Davis among the biggest threats in yellow.

A fast start to the second half ultimately yielded the winner when Gyökeres was left unmarked in the home penalty area, and though Ken Sema and Sarr spearheaded the Hornets’ efforts they were unable to level the scores. 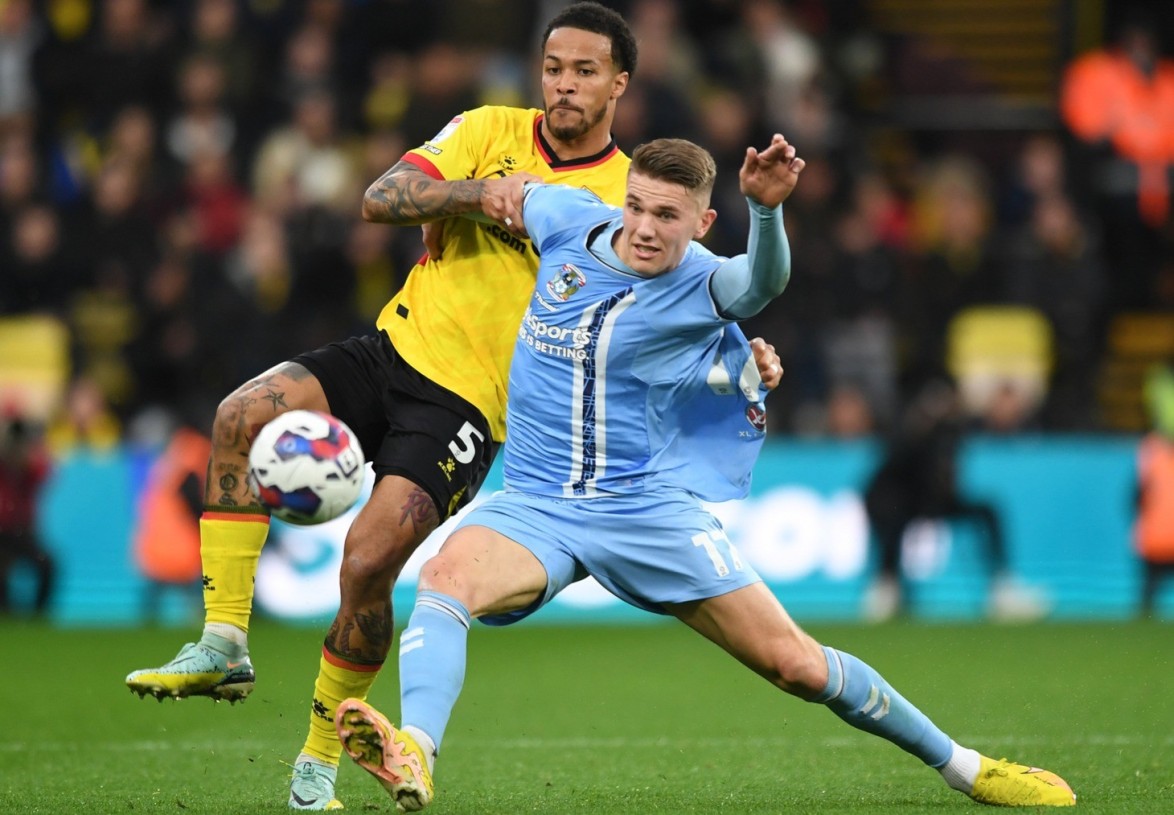 The disappointing result leaves Slaven Bilić’s Golden Boys seventh in the second-tier standings, with two games to go until the upcoming World Cup break, starting with Reading at home up next on Tuesday (November 8, 8pm KO).

Head Coach Bilić made two changes to the XI that had triumphed over Cardiff City on Wednesday night (November 2), with Hamza Choudhury returning from suspension in place of Mario Gaspar, and the fit again Davis coming in for Vakoun Bayo.

Full of confidence following their three previous victories in a row, Watford started on the front foot with some neat patient play, though a silky bit of Davis skill was the only real highlight of the opening seven minutes.

The first clear-cut chance of the match fell to the visitors however, with Kasey Palmer cleverly feeding Gyökeres, who could only crash his shot comfortably off target when through on goal. 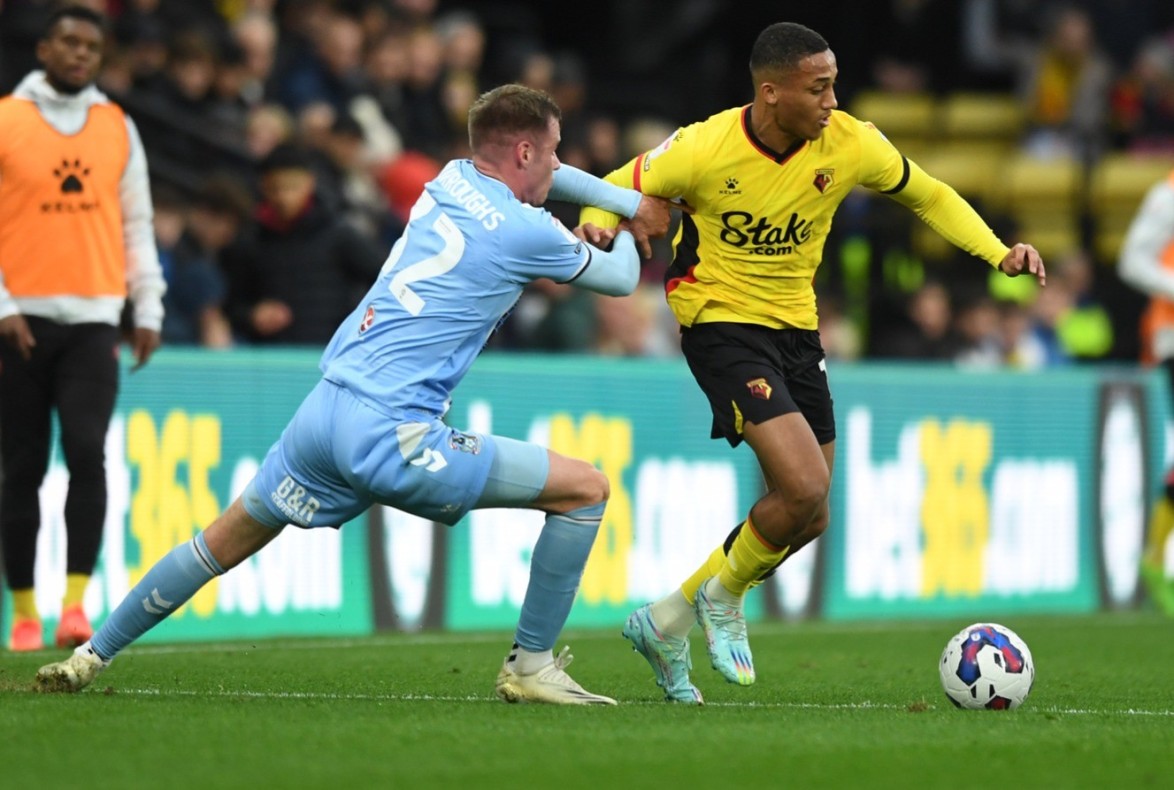 Sarr led the home charge in response, and almost immediately shot wide of Ben Wilson’s goal, before Daniel Bachmann sparked a huge roar from the crowd with an eye-catching back-heel to help snuff out a whiff of Coventry danger.

With both teams battling for control of the encounter, Ben Sheaf fizzed a powerful shot over the top of Bachmann’s goal just past the quarter-of-an-hour mark, and then the Hornets stopper produced a great save to keep out Gyökeres after the Swede had got the better of William Troost-Ekong.

Jonathan Panzo looped an effort over the bar in the aftermath of the subsequent corner, but Watford thought they had taken the lead in the 21st minute when Davis finished off Sarr’s cross, only for the goal to be ruled out by referee Leigh Doughty.

A Sema free-kick six minutes later required a strong palm from visiting keeper Wilson, and then the former did well to set up a dangerous Watford counter-attack that saw almost the entire Coventry line-up track back to deny Davis, and then Sarr. 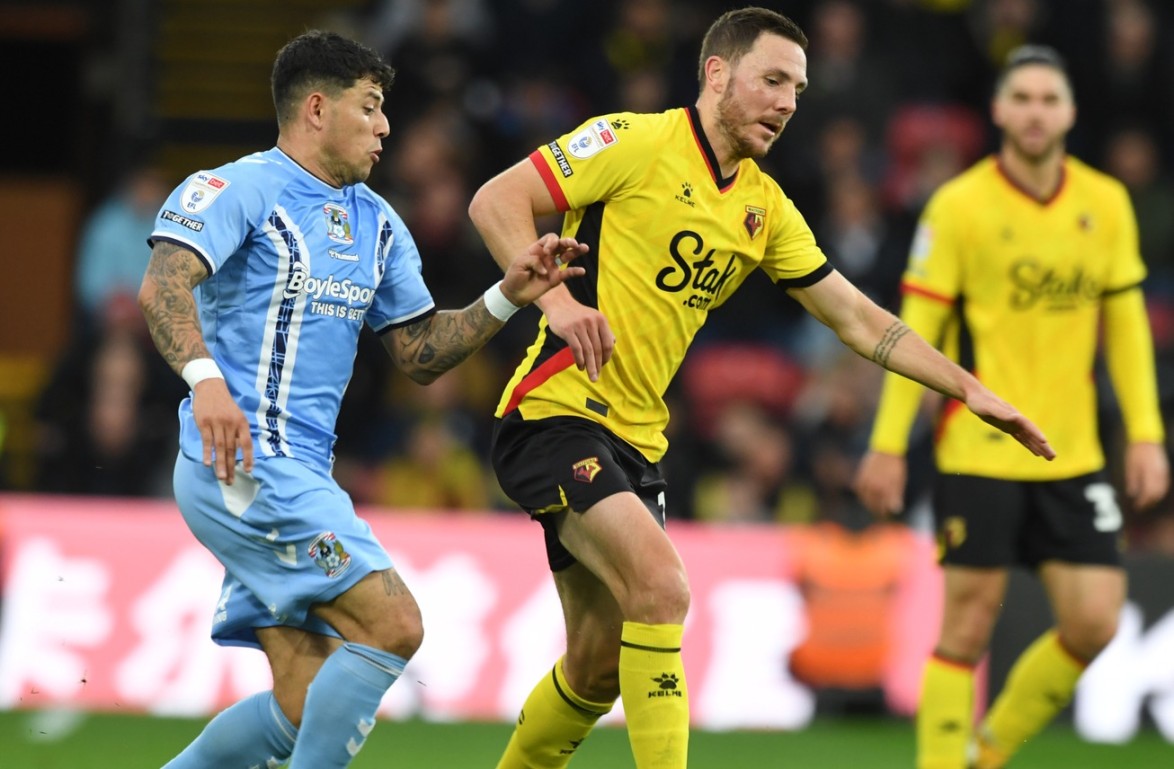 Francisco Sierralta was called upon to block another attempt from the lively Gyökeres in the 35th minute, and after the Chilean had brought another Sky Blues attack to an abrupt end, the first half was drawn to a close with the game still goalless.

Coventry burst out of the blocks after the break, with Gustavo Hamer sending a shot wide of the target within the first 35 seconds, but a tricky bit of Sarr footwork opened up a chance for Sema soon after, who similarly couldn’t test the goalie.

Gyökeres got the goal he’d been threatening for most of the afternoon on the 50-minute mark, though, with Jamie Allen picking him out unmarked on the penalty spot, and his finish crashing past Bachmann to break the deadlock and make it 1-0.

Davis came within inches of a quick equaliser six minutes later, when a Sarr flick-on just evaded him at the back post, and then Sierralta rose highest to meet a Sema free-kick, and saw his header bobble off the crossbar. 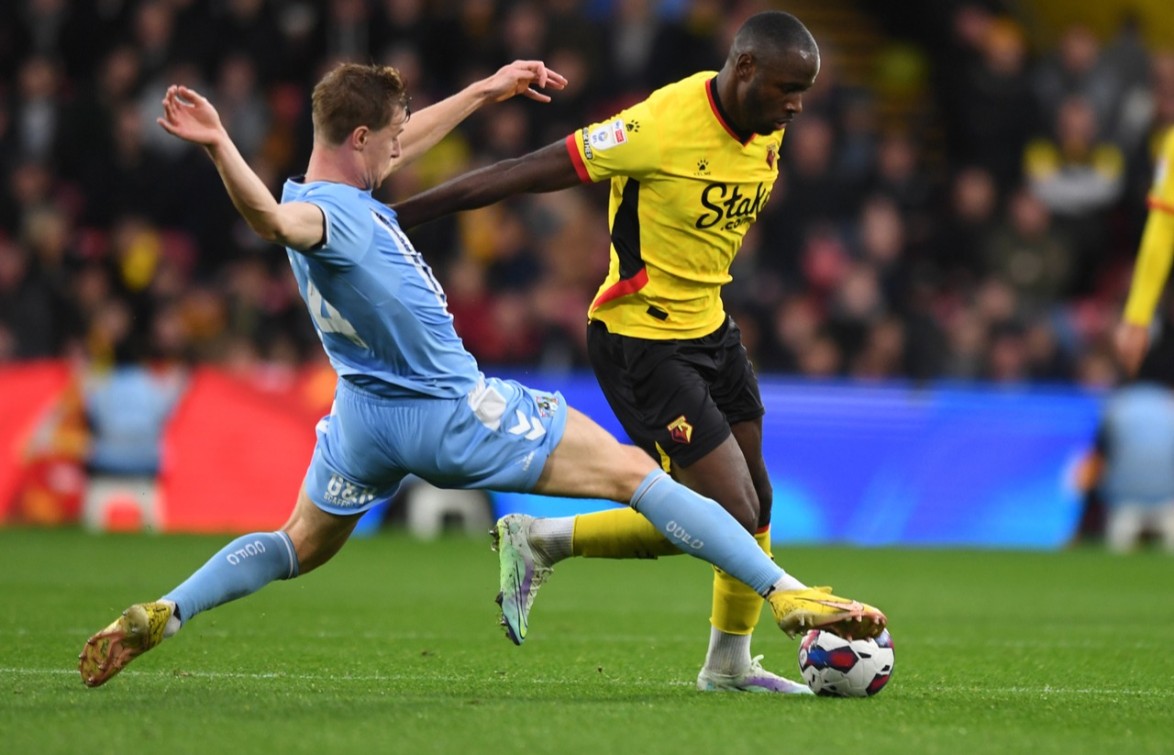 A double change shortly after the hour introduced Gaspar and Yáser Asprilla to the action, and the latter unlocked the away defence to set up a Hassane Kamara cross that Sarr just couldn’t steer into the net from point-blank range.

Sierralta and Choudhury were both cautioned as Watford were forced to deal with a wave of Coventry pressure, and after a lofted free-kick from Hamer nearly set up Sheaf at the back post, Kamara joined his teammates in the book for a heavy challenge on Tyler Walker.

Sarr leapt to latch on to an Edo Kayembe cross but couldn’t steer an effort goalwards with just three minutes left, before substitute Joseph Hungbo did well to skip past Callum O’Hare and shoot, only for Wilson to palm his shot out for a corner.

Coventry were left camped in their own half as the Hornets continued their push for a goal, but a succession of corners - that saw Bachmann go up and increase the pressure - came to nothing, leaving Coventry with the full share of the spoils.