Slaven Bilić steered Watford to their first away win of the 2022/23 season in his first match in charge as the Hornets emphatically saw off Stoke City 4-0 at the Bet365 Stadium.

Following a high-tempo start to proceedings Ismaïla Sarr nodded the Hornets in front after some neat play from Edo Kayembe and Hassane Kamara, though the Potters enjoyed plenty of possession and kept Daniel Bachmann alert in the away goal.

With both teams having enjoyed chances, Ken Sema cushioned Watford’s lead by poking home a second in the 64th minute, before Keinan Davis and Vakoun Bayo added gloss to the scoreline with strikes late on.

A first three points since late August lifts Bilić’s men to seventh after 11 games, with a return to Vicarage Road to face Swansea City on Wednesday night (October 5, 7.45pm KO) next up in the calendar. 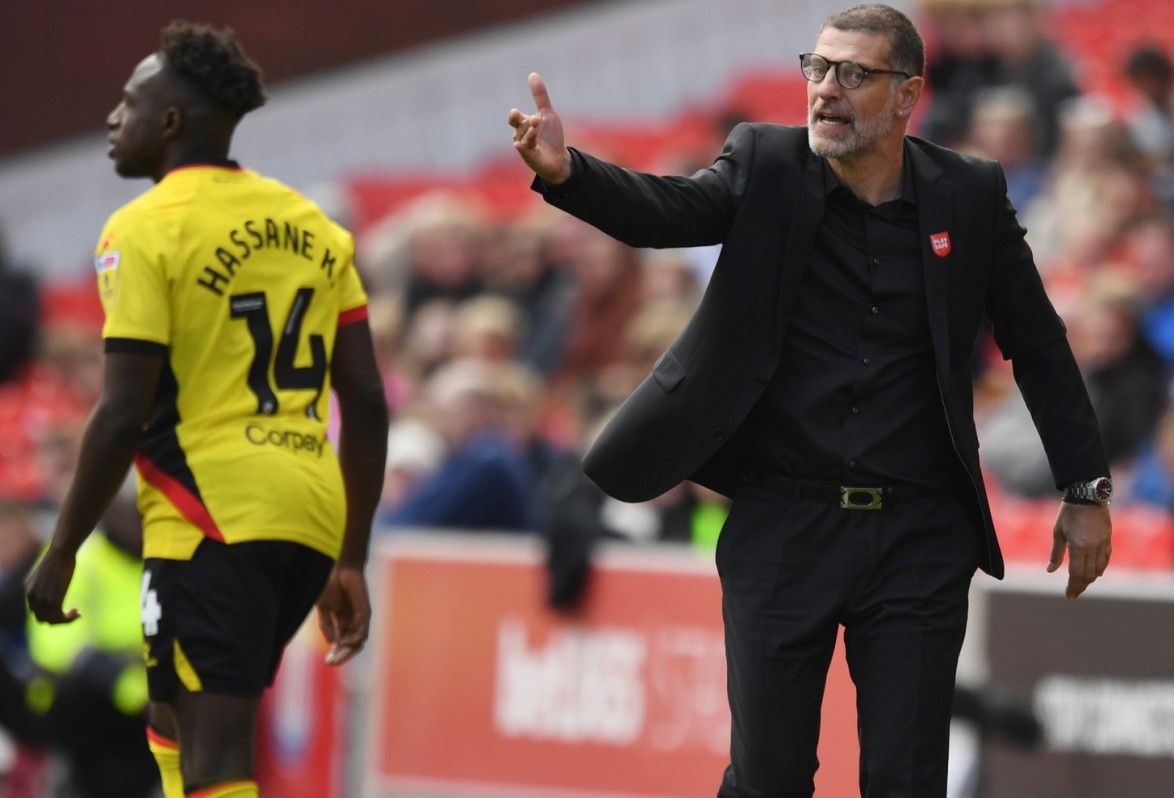 Head Coach Bilić made four changes to the XI that had drawn at home to Sunderland in the Hornets’ previous outing, with Christian Kabasele, Francisco Sierralta, Mario Gaspar and Sarr all being drafted into the starting line-up.

In what was a competitive opening, captain for the day Kabasele did well to snuff out a home chance created by Dwight Gayle with a smart last-ditch tackle, and then Bachmann reacted well to beat the latter to a dangerous ball over the top.

Aden Flint was next to threaten for the Potters with a weak header from Will Smallbone’s looping cross, but, after gradually gaining a foothold in the contest, it was Watford who snatched the lead in the 12th minute.

After Kayembe had done well to release Kamara in space on the left, the Ivorian defender delivered a brilliant cross into Sarr, who had escaped his marker and headed coolly past Josef Bursik to make it 1-0. 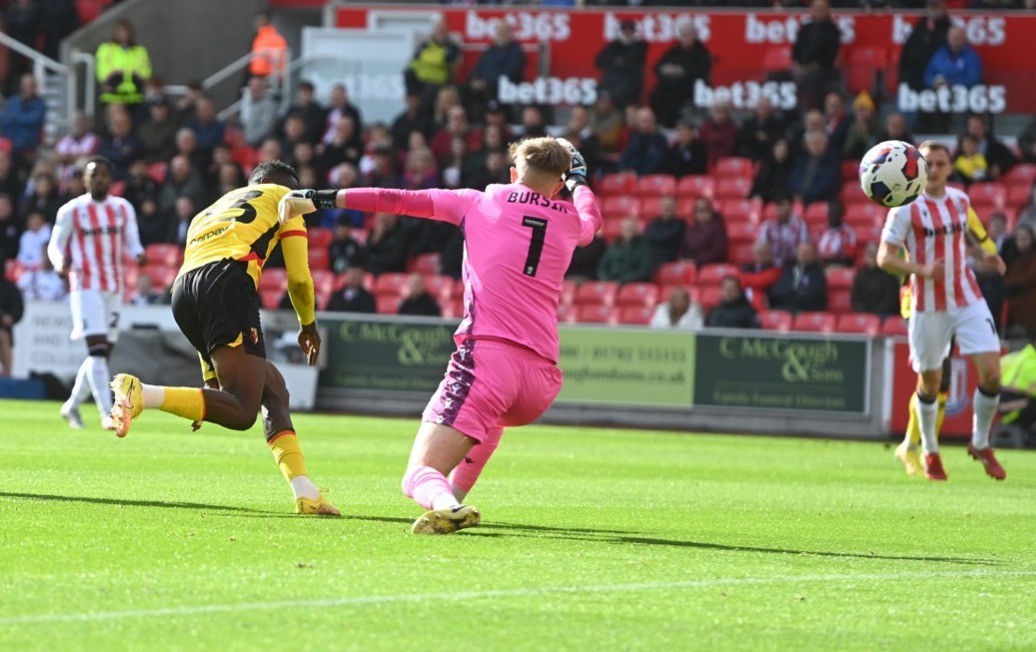 With the momentum in their favour the Golden Boys continued to push forward, and a Kayembe piledriver whistled narrowly past the post via Davis’ leg, only for the offside flag to be subsequently raised.

A succession of Stoke corners served a reminder of the quality possessed by the hosts, and then Bachmann went down under a challenge from Liam Delap after beating the Manchester City loanee to a clever Gayle flick-on.

Sarr went close to doubling his tally in the 24th minute, when he met another Kamara cross with a glancing header that rattled the woodwork, before Sema then hit the post with a fizzing shot from a tight angle.

Delap responded for Alex Neil’s charges by heading off target on the half-hour mark, and the 19-year-old was again at the centre of the action 10 minutes later after beating Kabasele, but he lifted his shot just too high over the bar. 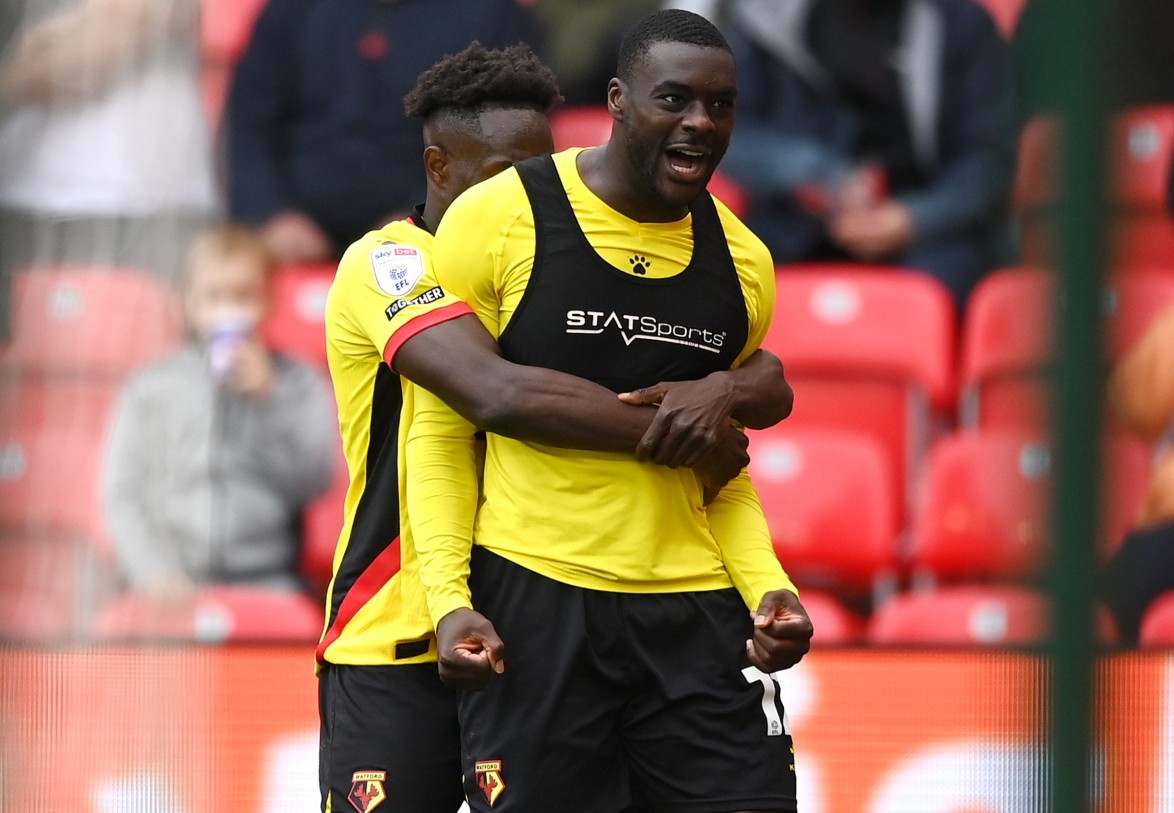 Stoke had the last say of the first half when a melee in the box saw the ball fall at Delap’s feet, but his shot from close range bobbled wide and ensured the Golden Boys went into the break one goal to the good.

Watford burst out of the blocks after the restart, with Sierralta going close with a header from Gaspar’s teasing free-kick, but Bachmann was soon required to palm away a curling Lewis Baker set-piece that was headed for the top corner.

Stoke skipper Baker then flashed a half-chance off target, and Choudhury was needed to head a Smallbone shot away from danger moments later, as the home side continued their push for a leveller.

Sarr led Watford’s efforts back at the other end, with the Senegal international seeing another header blocked this time by Morgan Fox, before Imrân Louza came off the bench for his first appearance of the season shortly before the hour. 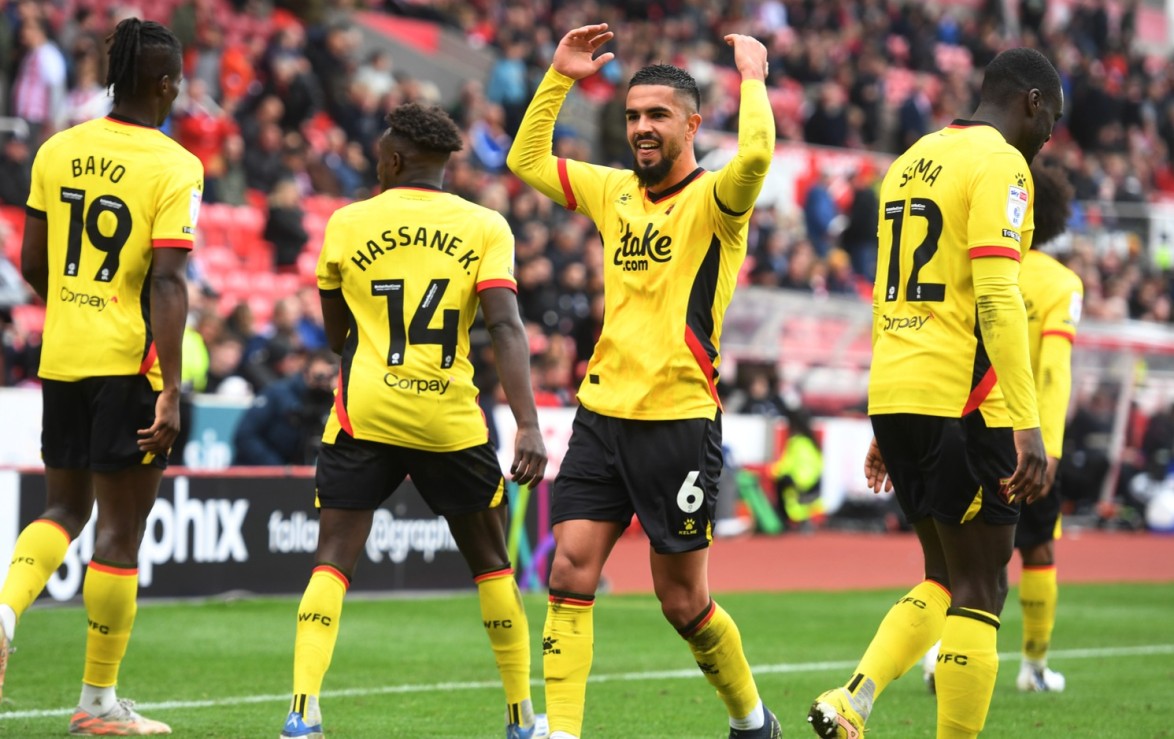 And it wasn’t long before the Hornets made it 2-0, with Sema burying his second of the season at the second time of trying after Choudhury had initially picked out Davis in the home box.

Gayle and Smallbone did their best to get Stoke on the scoreboard, but both were unable to trouble Bachmann with efforts around the 70-minute mark, and then Davis forced a Bursik save in search of a third for the visitors.

The third goal did arrive 12 minutes before the end, with Davis getting in on the act with a powerful low drive after smartly working the ball onto his left foot, putting the result beyond doubt.

Then it was Bayo’s turn six minutes later as Watford ended the match with a bang, Louza – who had impressed since coming on – finding his fellow substitute at the far post to tap in and complete the 4-0 rout.