In 2015, the last time the club were in the Championship, the team beat Middlesbrough in the second part of an Easter double to take a sizeable step towards automatic promotion.

It looked for so long here that it was going to be another Easter Monday win over Boro, but Neil Warnock loves nothing more than to be a fly in the ointment and he clipped the Hornets' wings with a clever substitution to deny the team a seventh straight win. Warnock has lost 17 games against Watford in his career and he was determined not to experience defeat in this one.

Although it would have been nice, you can't win them all, as they say, and the six-match winning streak had to come to an end at some point, but it was just a shame the leveller came 12 minutes from the end of a game the Hornets largely controlled and should really have had sewn up by the time Yannick Bolasie came off the bench to cancel out Ismaïla Sarr's first-half opener. A point is not to be sniffed at in this neck of the woods, particularly at this full-on time of year, but it always feels like two dropped when you take the lead and have forged such a reputation for keeping clean sheets. 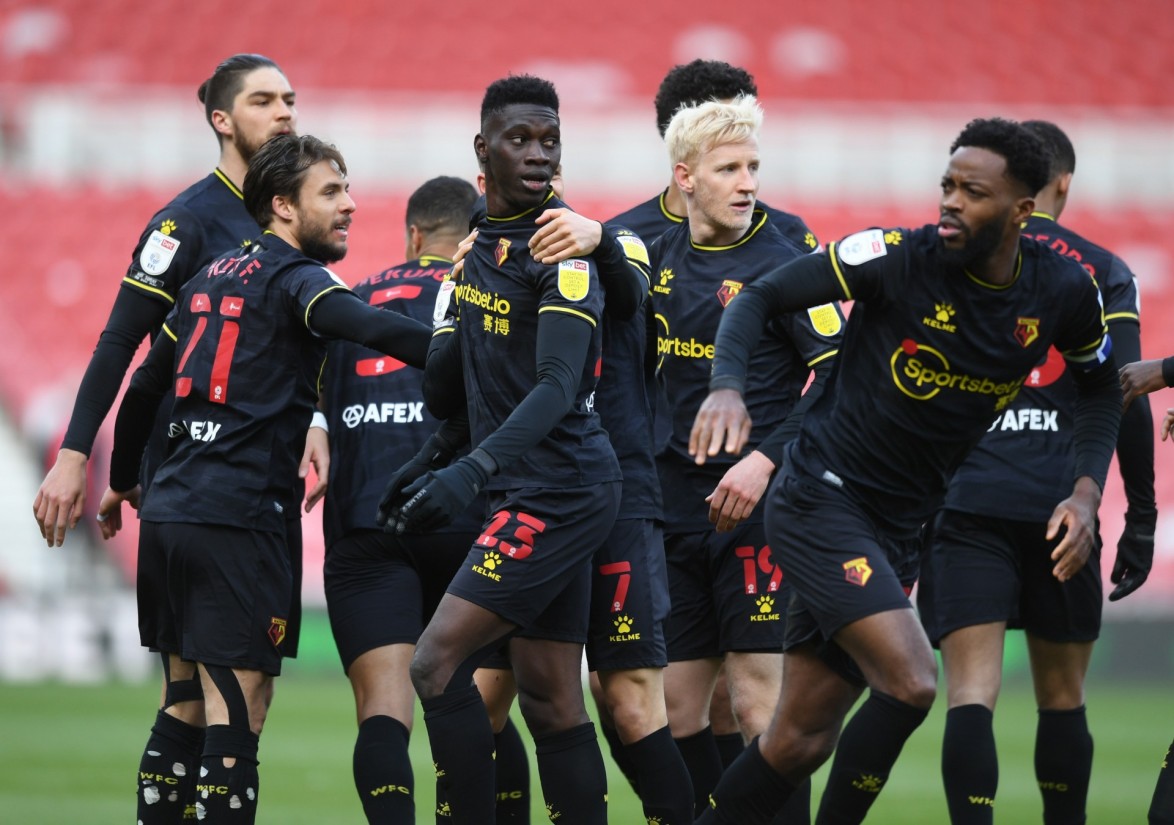 It was another efficient performance from the Hornets, who were never spectacular but always solid. They might, on reflection, regret not going for the jugular and putting this one to bed much earlier. They certainly had enough off the ball and the lion's share of the chances. Boro made them pay for not taking them and scored with their only shot on target. That's just the way it goes sometimes.

Still, it's one defeat in 12 games and, a month or even a fortnight ago, everyone would have taken a haul of 79 points and a nice little buffer over Brentford and Swansea with six games to play. The team have, it should be noted, six more points than they had at the same stage of the last Championship campaign – and we all know how that one panned out.

Just like Sheffield Wednesday on Good Friday, Boro made the Hornets work hard, as they were always going to when you are a group of players sent out by Warnock, their wily old fox of a manager. Warnock had done his homework and the upshot was a luke-warm start from the boys in black. There was no early storm to weather, like there probably would have been with a bumper crowd in, while the Hornets didn't come flying out of the traps like they have done at home. João Pedro and Philip Zinckernagel were very bright in the opening exchanges, enjoying skating around on a very slick pitch on Teesside. Boro wanted to make things difficult for the home side, as was evidenced by Darnell Fisher launching one clearance well over the East Stand, which was no mean feat. Their plan was to remain in the game for as long as possible and then have a got at the end. 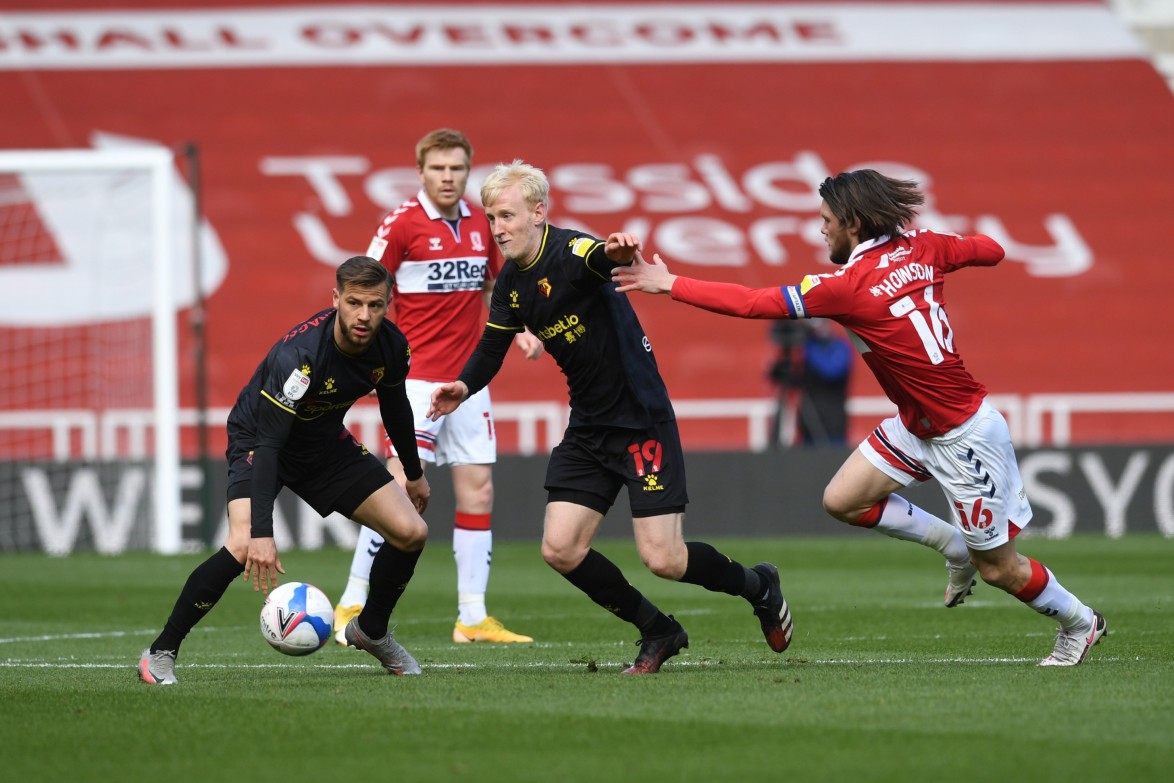 Apart from a half chance for Ken Sema with his right foot after yet more interplay down the right from Sarr and Kiko Femenía, there was very little to write home about until Sarr deflected in Zinckernagel's shot on 32 minutes. Boro were up in arms, claiming offside but the referee and linesman got it spot on. Xisco Muñoz was even trying to show Warnock on a tablet that the decision to allow the goal to stand was correct.

That really was about it in the first period. Boro didn't even have a shot on goal while the Hornets only mustered half a dozen. The fact there were 16 fouls told you just how stop-start the opening 45 minutes were.

The Hornets were more expressive in the second half, with João Pedro three times going close with efforts that just fell the wrong side of the right-hand post, the first after some lovely skill from the excellent Nathaniel Chalobah, the second after some classic wing-play from Sarr and the third after Sema teed up him perfectly to try and bend one in the far corner. It could have done with one of those going in and that would have been it, game done and dusted and the subsequent emptying of the bench. 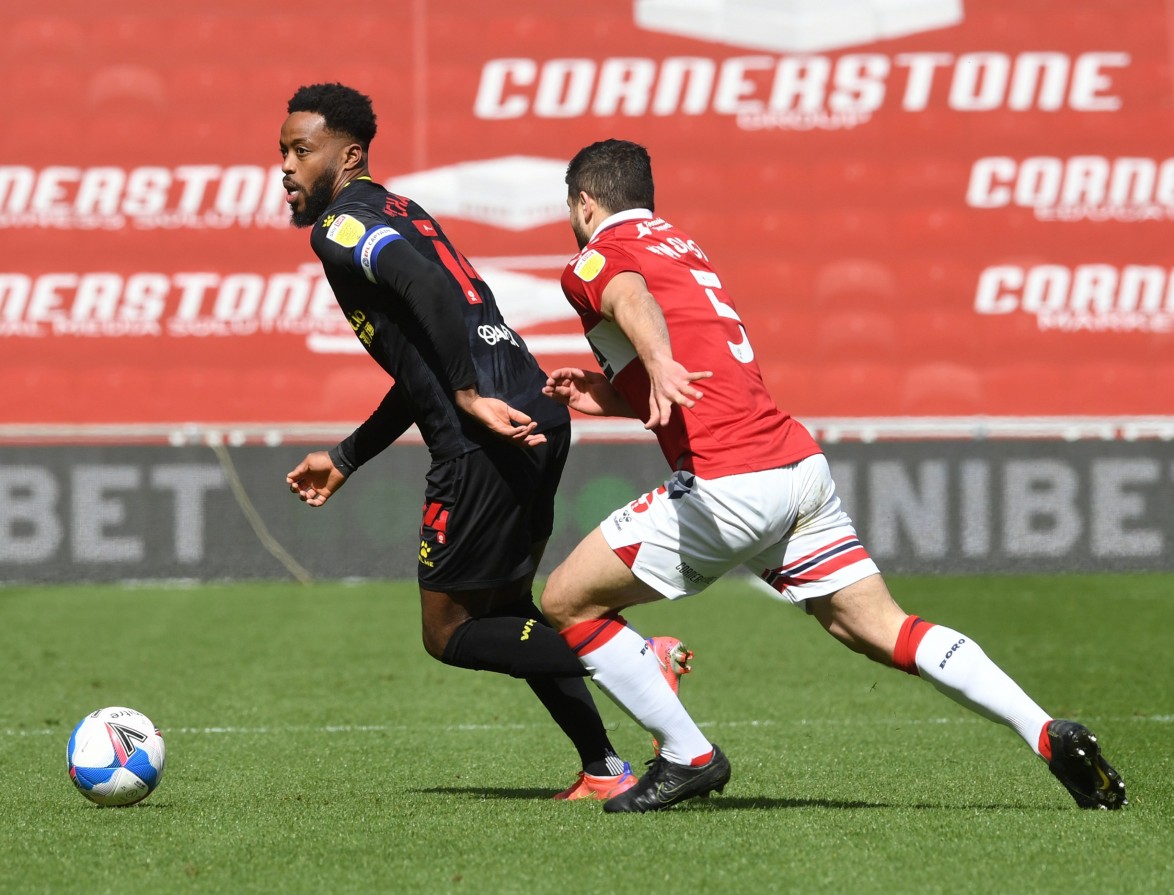 Knowing his side were somewhat fortunate to be alive after the 70th minute, Warnock sent on attacking weapons Bolasie and Chuba Akpom to try and alter the inevitable course of this one or at least register a shot on target. Muñoz, who usually loves an attacking change, responded by bringing on Dan Gosling for Zinckernagel in a move designed to close the game out. Warnock won this tactical duel and was rewarded for his bravery when Bolasie nodded in a brilliant free-kick from Paddy McNair just five minutes after coming on. It was the first goal the Hornets had conceded in 280 minutes of football and denied the the team a 20th clean sheet, one that would have moved them level with the team of 1994/95 when Kevin Miller was in such inspired form between the sticks.

You feared, for one horrible moment, if Boro, now with the momentum, might grab a winner, but they never really threatened it while the Hornets never really looked like grabbing a winner of their own. It felt at full-time a bit like one that slipped away, but it might well be viewed as one gained in a few weeks' time.