The wait for that first win at Old Trafford since 1978, that glorious October night when Luther Blissett stuck two second-half headers past the Red Devils, goes on.

Victory here, against the 12-times winners and the joint Premier League leaders, was always going to represent the longest of shots, even though United made nine changes to the side who played here in midweek against Manchester City. A very watchable match ended up being a lot closer than the disparity in league position and resource suggested – a fifth-minute goal from Scott McTominay proved the difference – and the way the Hornets had a right good go augurs well for future front-foot performances in the league.

Progression to the fourth road of this famous old cup would have been lovely, and would have ended a run of 14 fruitless visits to the red part of the city, but there was a bigger picture at play here. It was important to get minutes in the legs of key players like Will Hughes, Adam Masina and the returning João Pedro, give new signing Philip Zinckernagel a first taste of English football and enable Head Coach Xisco Muñoz to further stamp his attacking identity on this team ahead of a season-shaping run of fixtures in January. It would have been terrific had all those boxes been ticked in a historic win, but it wasn't to be. Nobody will lament defeat here if the season ends in promotion back to the Premier League. 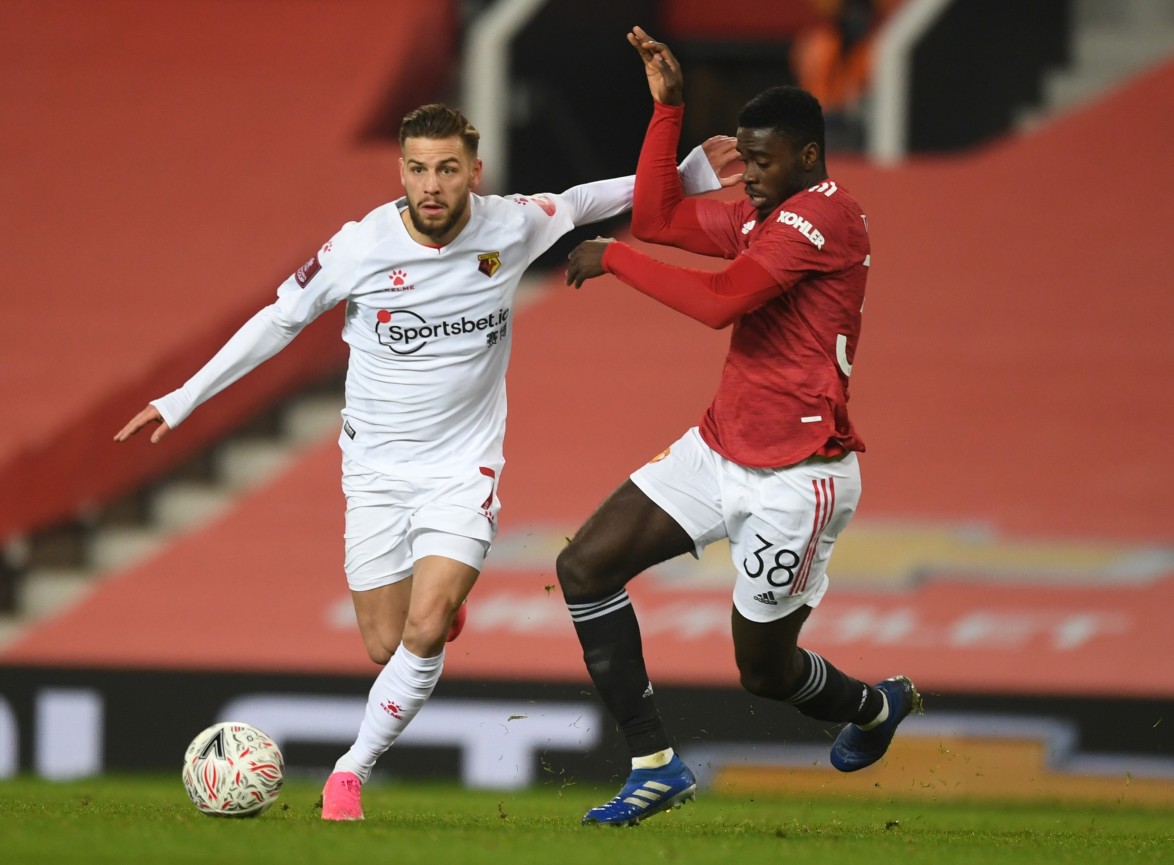 United knew they were in a game in this third-round tie and they never had things all their own way. The fact they summoned Anthony Martial and Marcus Rashford from the bench with 20 minutes to play on a freezing night suggested it was not as straightforward as Ole Gunnar Solskjær was expecting. There was a fair bit to be encouraged about from a Watford perspective, particularly in the way Hughes, in his first start since the final day of last season, patrolled the midfield with typical bite and how Ismaïla Sarr opened his speedy legs and was so direct before he was replaced with a hectic January in mind. João Pedro also looked bright in his first appearance for more than a month while Zinckernagel looked technically proficient and well balanced.

You just need to start well in games of this size, against this calibre of opposition, so it was a blow to concede after five minutes. It was not a spectacular goal either: McTominay nodding in from a corner. It was one that definitely fell into the avoidable category.

Often the concession of an early goal at places of this stature are a signal for the floodgates to open, but the response for the remainder of the half was really encouraging. The visitors took a little while to steady themselves after being rocked by the early goal, but they then had a right good go. With Sarr enjoying the vast open space down the right, Zinckernagel neat and tidy down the left and João Pedro dropping into some useful pockets, the Hornets mustered 11 shots at goal and forced two more corners than their exalted hosts in the first 45. 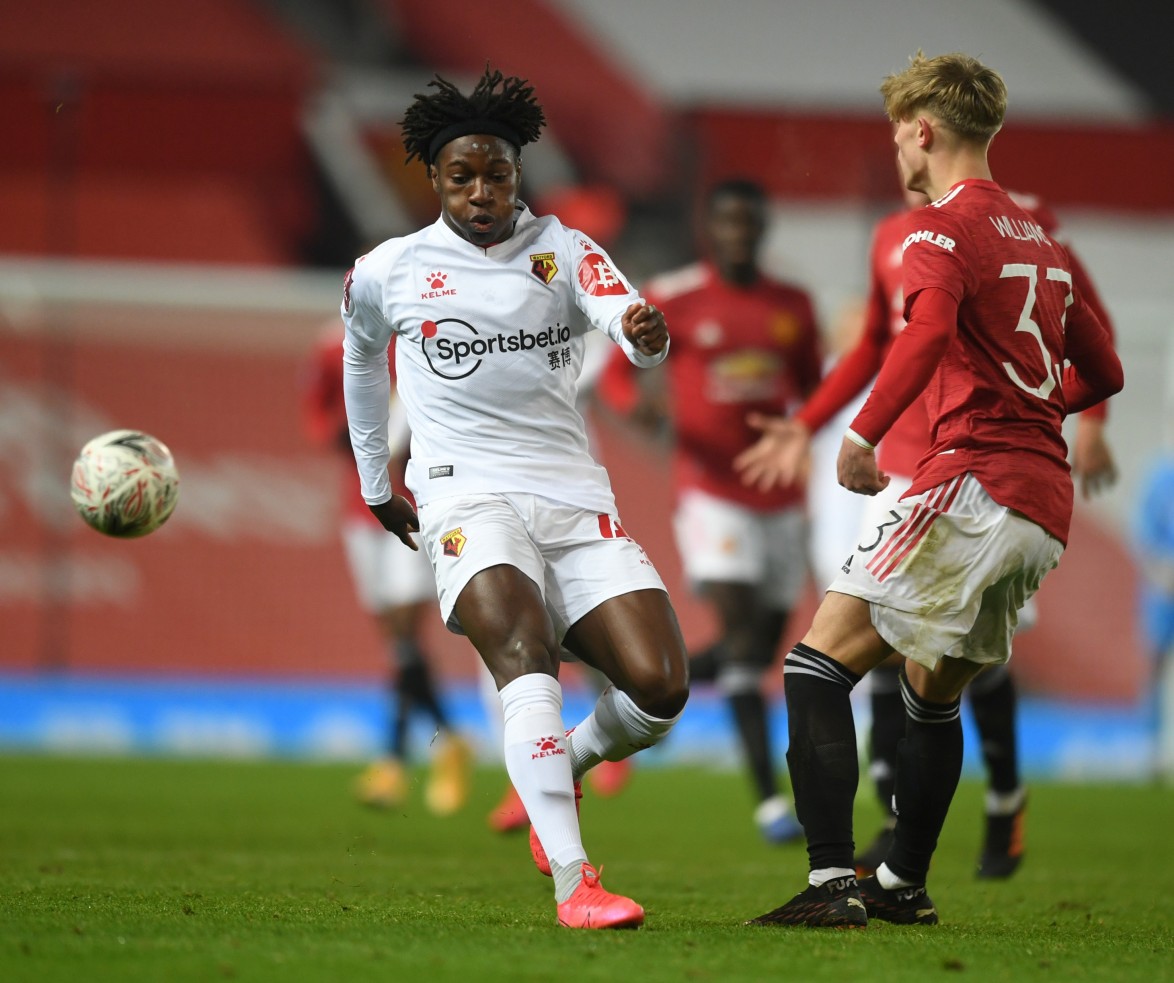 You couldn't say they forced a clear-cut chance, not that you get many of those in these parts, but they certainly made United defence and keeper earn their money. Up for a free-kick, Masina thought he had tucked one past Dean Henderson only for the keeper to spread himself like Peter Schmeichel and keep out the left-footed effort on the turn.

Sarr got in behind after João Pedro helped; got involved in a spot of penalty area pinball that led to shouts for a handball; sent over a firm cross that required emergency action from McTominay and then Nathaniel Chalobah dragged one wide.

The progressive approach continued in the second half and there was certainly no sitting back. João Pedro had a couple of headers on goal, substitute Ken Sema was lively down the right, Andre Gray glanced a near-post header just off target while even Jeremy Ngakia tried to bend one in the far corner. There were also appearances to remember at this famous old place for young professionals Daniel Phillips and Joseph Hungbo, who had one effort deflected wide. All in all it was a pretty heartening night, despite the narrow defeat. The team also exited the competition at this very stage to high-class opposition in 2014/15 and we all know how that season panned out.