Leicester City came out on top in a six-goal game at the King Power Stadium, with Joshua King and Emmanuel Dennis etching their names onto the scoresheet for the Hornets under a blanket of snow.

The Foxes would break the deadlock through James Maddison, who exploited a misjudgement in defence, allowing the Englishman to place the ball past Daniel Bachmann.

The travelling Hornets would strike back courtesy of King’s penalty, which was won skilfully by Dennis, however it wouldn’t remain level for long. Jamie Vardy notched a quick-fire double just before half-time, leaving the Hornets with a two-goal deficit going into the break.

As the game settled, alongside the snow, the conditions became tricky. It certainly didn’t hold back Dennis, who produced a fantastic finish to reduce the arrears, dinking the ball over Kasper Schmeichel. The hosts responded quickly however, with Ademola Lookman notching their fourth. The Hornets were unable to find a response, with focus turning to Chelsea in just three days. 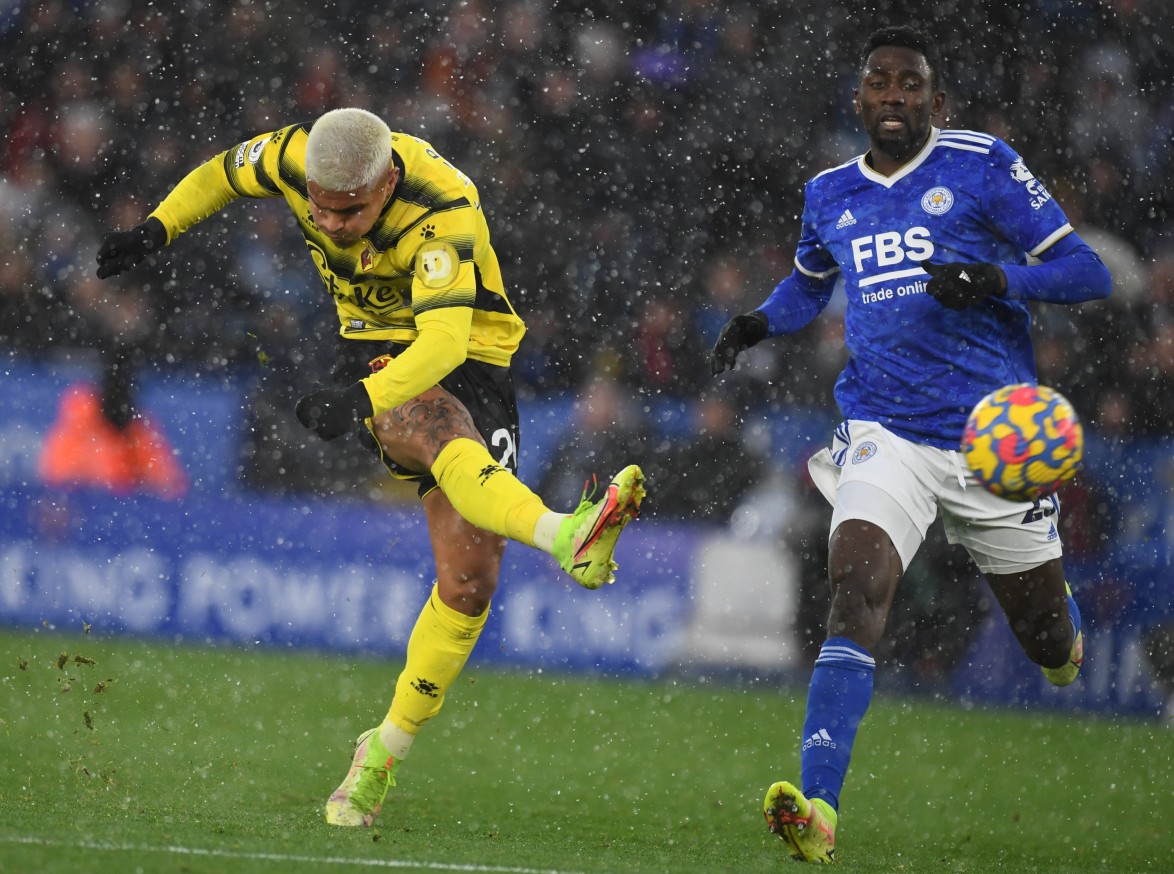 The Hornets' Head Coach, Claudio Ranieri, received a rapturous welcome pre-match from the Leicester supporters, with this his first match at the King Power since the Foxes' famous Premier League title win back in 2016.

The Italian made three enforced changes from the Manchester United victory, with Bachmann, William Troost-Ekong and Cucho Hernández coming in for the injured Ben Foster, Nicolas Nkoulou and Ismaïla Sarr.

The incoming Austrian was the first goalkeeper to be challenged, with Bachmann able to parry Vardy’s shot comfortably away from goal with his near-post covered well.

Ranieri’s travelling Hornets wrestled back and slowly started to get a hold of the game early on with an opportunity falling to Dennis, but his deflected strike was fired just over the bar.

The familiar pressing tactic that produced success against Manchester United was employed once again, forcing Schmeichel long on more than occasion. 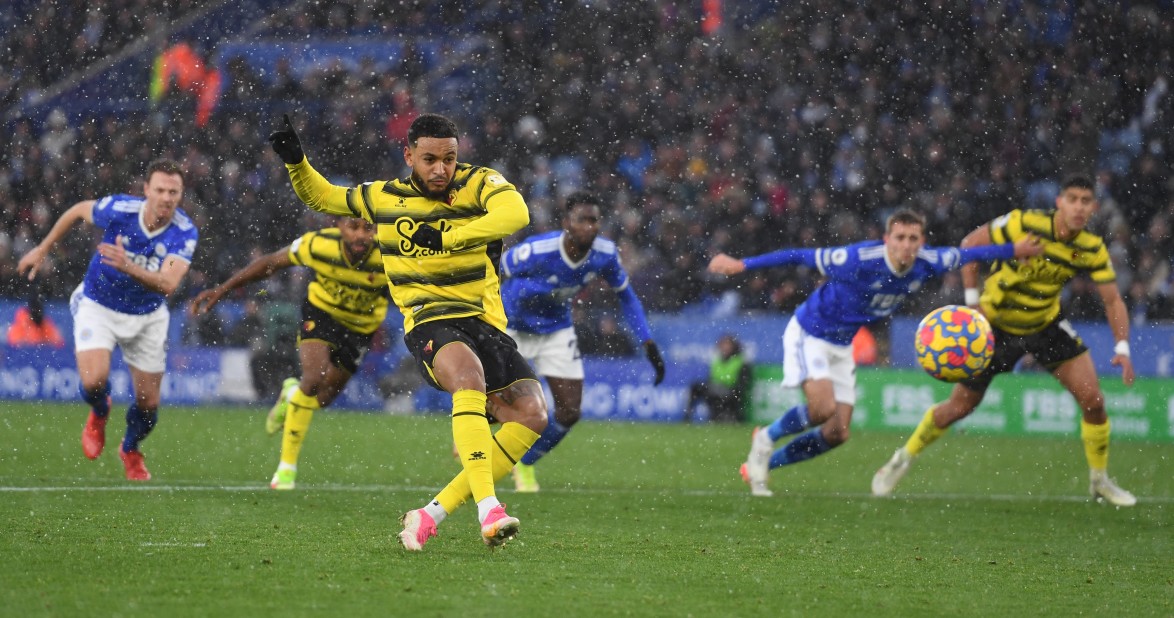 Despite this, it would be the home side that would plant the first blow with Maddison capitalising on a miscalculation from Troost-Ekong, side-footing the ball into the corner of the net.

The Hornets persevered and forced a save out of Schmeichel moments later, with Dennis’ low driven strike not powerful enough.

With the snow falling, Watford nearly found an equaliser through Adam Masina. Tom Cleverley delivered an inch-perfect set-piece to the Moroccan at the back-post, who headed it only inches wide.

Hernández proved to be a nuisance for the Leicester defenders, constantly driving into vacant space. It eventually culminated in the Colombian unleashing a long-range strike that caught Schmeichel off guard and hit the woodwork, via a deflection, going agonisingly close to crossing the line.

Watford’s ascendency eventually paid off as Dennis turned his countryman Wilfred Ndidi in the box, inviting the Leicester City midfielder to stick out a careless leg, which forced referee Andrew Madley to point to the spot. 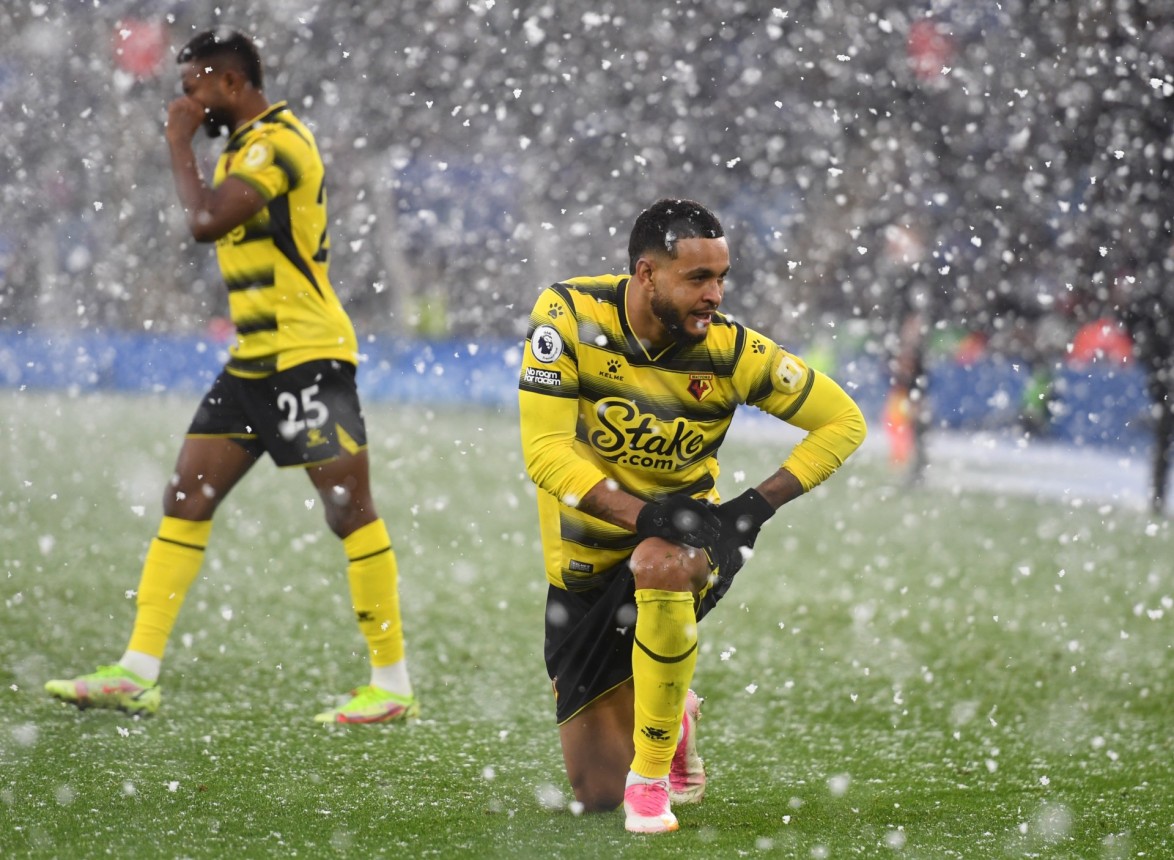 King stepped up and fired the ball into the bottom right-hand corner, past the Danish goalkeeper to equalise.

The game wasn’t equal for long though as Leicester’s goalscorer Maddison delivered a sweet flicked through ball to Vardy, who notched his first of the afternoon.

The Leicester pair would combine once more, on this occasion from a corner, as Maddison chipped the ball to Vardy who nodded in from the near post unmarked.

Just before the break, Bachmann was forced to stop the Foxes marksman from notching a first-half hat-trick, producing a good stop from point-blank range to deny Vardy.

During the interval, Ranieri didn’t hesitate to rotate the side, taking Cleverley and Imrân Louza off with Joāo Pedro and Ozan Tufan tasked with making the difference.

With the pitch almost blanket white following the restart, Schmeichel produced a great save to deny King his second from close range. The chance was created courtesy of the hard work from the energetic Hernández, who seemed to take on every Leicester defender before picking out the Norwegian. 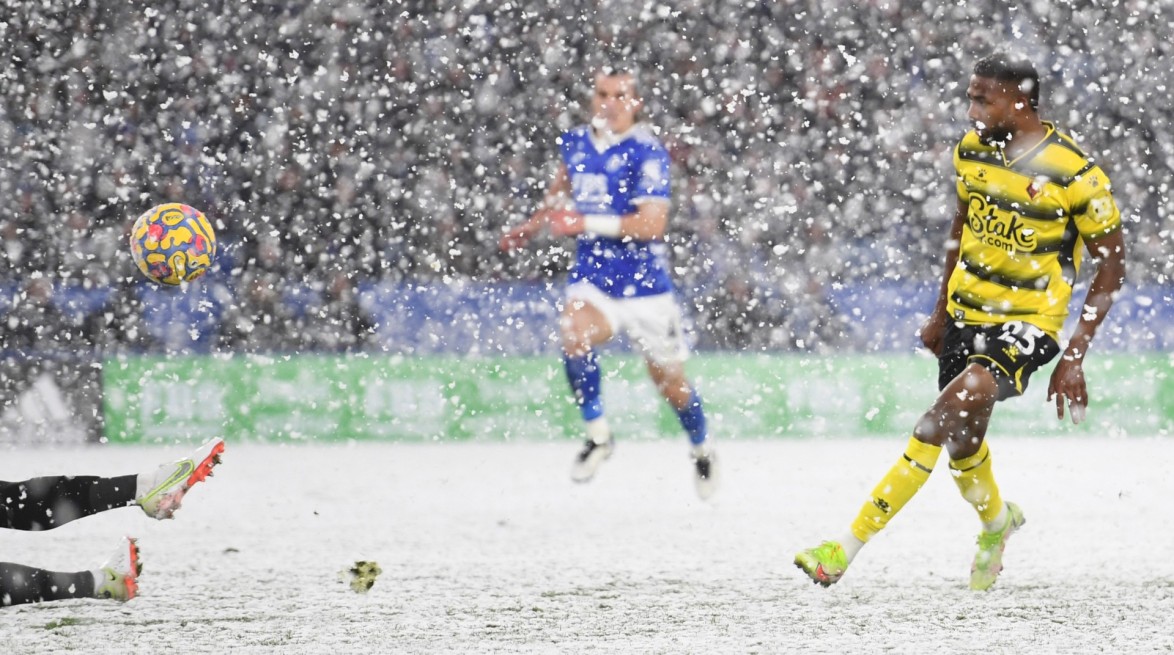 Catching Foxes defender Timothy Castagne unaware, Dennis burst past the Belgian, winning the ball in the process and setting up a one-versus-one with Schmeichel. With composure and expertise, Dennis fooled the Leicester captain, dinking the ball into the net to bring the difference to just one goal. Once confirmed by VAR, the game was halted to clear the snow that had clung to the white lines.

Leicester City scored their fourth of the afternoon seven minutes later through Lookman. Masina felt he was fouled during the build-up, but nothing was given.

Dennis made way for Ashley Fletcher in a bid to claw the game back, with the Nigerian having produced another fruitful performance in a Watford shirt.

Despite glimpses from substitutes Tufan, Joāo Pedro and Fletcher, the scoreline remained unchanged with the hosts taking the spoils in an entertaining but fruitless encounter.