The helter-skelter nature of this relegation battle, and the highs and lows that come with it, continued at Selhurst Park as the Hornets failed to follow up the momentous win at home to Liverpool by collecting anything tangible against Crystal Palace.

A point here would have done very nicely and been the perfect way to back up events at a disbelieving Vicarage Road last Saturday night, but it wasn't to be. Fortunately, other results, including defeats for Bournemouth, Norwich and West Ham, mean not too much damage was done, although Aston Villa do now have two games in hand. It now comes down to a nine-game season for the Hornets, five at home and four away, and you can expect plenty more twists and turns yet.

Nigel Pearson's side didn't do too much wrong in south London and certainly could not be accused of not going for it, with three forwards all summoned off the bench in the last 16 minutes. It was just they didn't get close to stringing together the sort of thrilling attacking performance they did against Liverpool and, apart from one close call in the second half from Troy Deeney, never looked like overturning Jordan Ayew's 29th-minute goal. 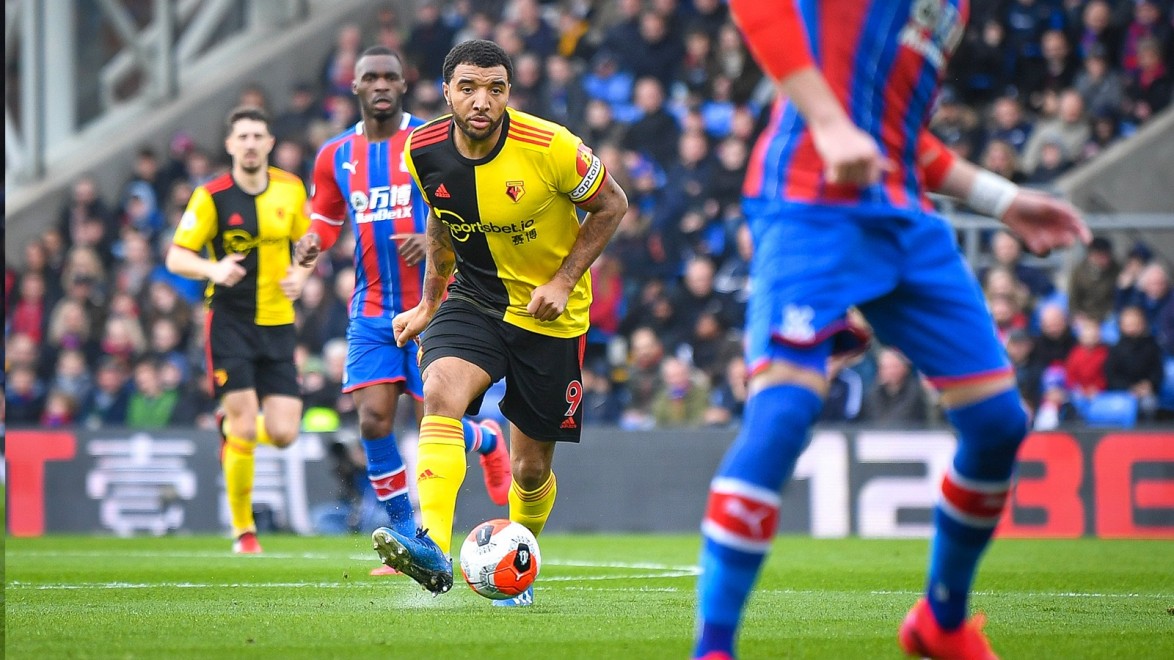 They certainly huffed and puffed, as four bookings in a spikey affair will testify, and it was certainly one of the better away performances this season. It's just that games in this league are decided by such fine margins and today, one goal was enough to settle it. You win some, you lose some. It just would have been handy if the Hornets could have drawn this one and kept the points tally ticking over. Anyhow, before the game against Liverpool last week everyone would have taken three points out of the next two games.

There was never going to be much in this one, not when Palace were the lowest scorers at home in the league and the Hornets were the second most goal-shy side on the road, and so it proved.

The goal came somewhat against the run of play. Amid some lovely promptings and driving runs from Will Hughes, the Hornets made an assured start. They had four shots to Palace's none after 20 minutes, including one from Ismaïla Sarr, the man of the moment, that went for a corner via a Palace deflection and one from Hughes that he dragged wide with his right foot.

The best Palace could muster was an attack involving Patrick van Aanholt after 24 minutes that Ben Foster had to smother. Apart from that, it was all fairly comfortable. It was therefore a bit of a bolt from the blue when Ayew rattled one in after 29 minutes. Christian Kabasele felt he was fouled by Christian Benteke at the very start of the move, but that should not detract from the quality of the strike from Ayew, the Ghanian, who rattled one clean as a whistle past Foster from the edge of the box. It was only their 12th home goal in 15 home games. 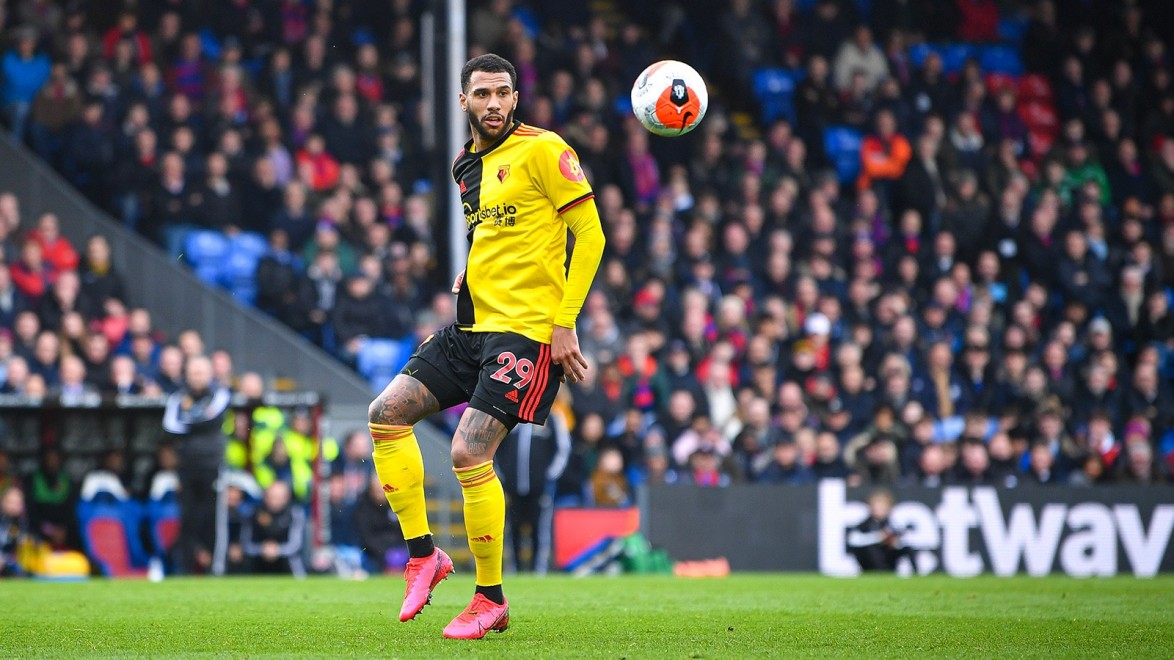 From there, there was the usual sideshow involving Wilfried Zaha. The winger was apoplectic at being booked, for the third time in five games against the Hornets, for a foul on Étienne Capoue and then made plenty of a collision with Will Hughes soon after. Referee Anthony Taylor thought briefly about issuing a second yellow, but, in the end, decided against it. Things were starting to boil up nicely and it needed Ray Lewington, the Palace No. 2 and that wise old head, to have a quiet word in Zaha's ear as he left the field at half-time.

Zaha walked out after the break remonstrating with Hughes, who was trying to placate the winger, but it made no difference as within two minutes Zaha was back at it, getting embroiled in an exchange with Capoue. Zaha put his hand in Capoue's face but wasn't shown a second yellow card after a VAR check, probably because he was already on a yellow, but then Cheikhou Kouyaté and Capoue were each shown a yellow for what looked much ado about nothing. It was all getting rather prickly, rather tetchy.

Zaha then showed what he can actually do, why he is such a danger when running at defenders, twisting and turning Craig Cathcart and forcing Foster to save with his knees after 55 minutes. 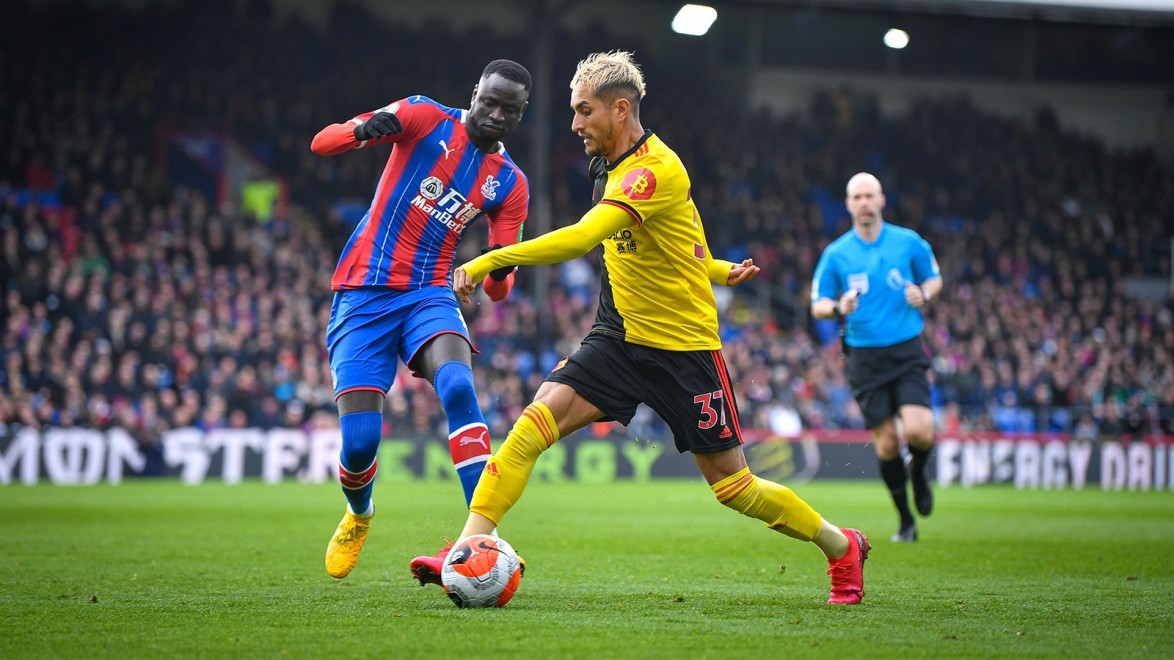 Vicente Guaita topped that with an extraordinary save 11 minutes later, diving high to his left to prevent Deeney picking out the very top corner with a howitzer of a right-foot strike. The Palace No. 1 was then scrambling across his line minutes later to claw away a header from Abdoulaye Doucouré. This was now the visitors' best spell of the game.

Pearson sought to drive home this advantage by sending for reinforcements, slinging on Danny Welbeck and Ignancio Pussetto with 16 minutes remaining. He then chucked on Andre Gray with six minutes to go in a real statement of intent, but nothing really dropped for the forward or the team. It was just that sort of day.