Football can be a game of such terrifyingly fine margins.

One minute, on the 66th to be precise, Dwight McNeill, the left winger, was on his own goal line clearing a header from Troy Deeney that would have put the Hornets deservedly in front at that point after the brightest of starts to the second half. Alas, six minutes later, and making the most of the reprieve, McNeill was doing what he was more renowned for and supplying a cross for Jay Rodriguez to head in the winning goal somewhat against the run of play.

That was the game in a nutshell, decided there and then in the space of 360 seconds with two swings of McNeill's trusty left boot. The upshot is the result leaves the Hornets still with their destiny in their own hands with seven games remaining, four of which are at Vicarage Road, and having gained a point on West Ham and Bournemouth after two games since the restart. But three precious points would have been lovely here, really lovely, especially as Burnley appeared to be vulnerable having so many regulars out and having been routed in their last outing. 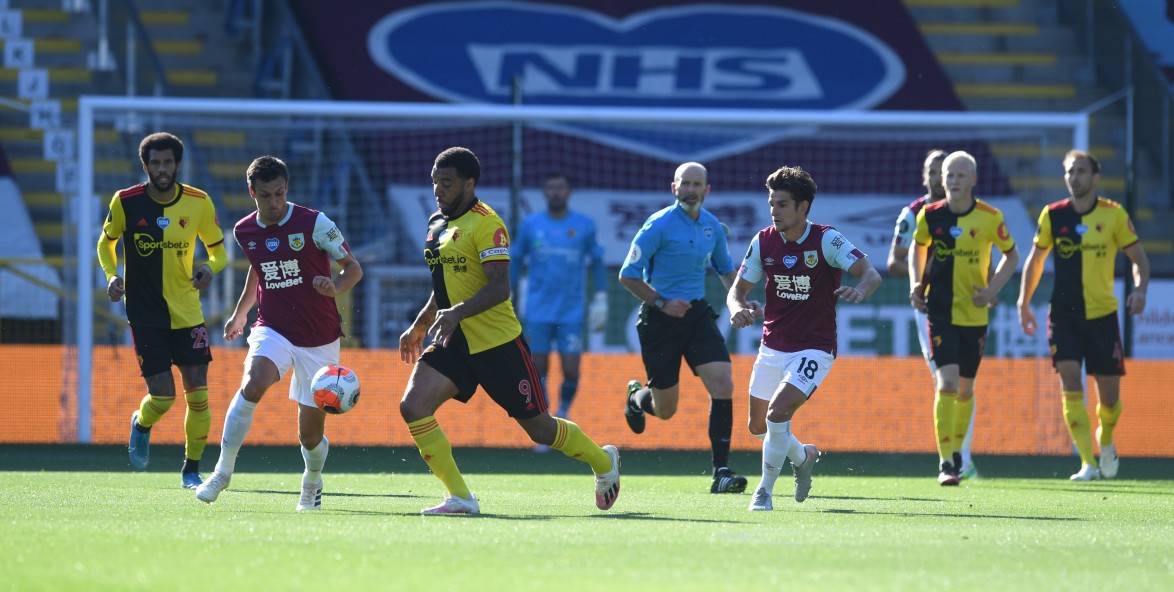 But every single point in this demanding league is hard earned, especially in this part of the world against a Sean Dyche team, and there is now a fair bit of work to do to ensure the Hornets are playing Premier League football for a sixth successive season. It's all still very much in their own hands, though. It's just that life would have just been a bit less tense had the Hornets managed to carve out a point or three and open up a gap on those below them. C'est la vie.

It was shaky start from the Hornets, the sort you'd expect when you had a boisterous Turf Moor crowd on your back on a filthy day in the north west. But the Clarets, perhaps wounded by the going over they got at Man City on Monday night, found their motivation from within to fashion much the better chances in the first half. In fact, Ben Foster got a real sweat on in the first 25 minutes of his 150th appearance for the club.

He scrambled to make a save from Rodriguez and was then up, quick as a flash, to palm away the loose ball with the help of Étienne Capoue. The former England 'keeper then saw Josh Brownhill sneak in at the far post to send a back-post header wide, was relieved to see a Rodriguez header ruled out for offside, would have been pleased to the former West Brom man shoot straight at him from distance and then, in the same move, Matej Vydra hit the post and Craig Dawson cleared one off the line. It was hairy stuff indeed and the Hornets, if we are being honest, could easily have been two down by the drinks break. 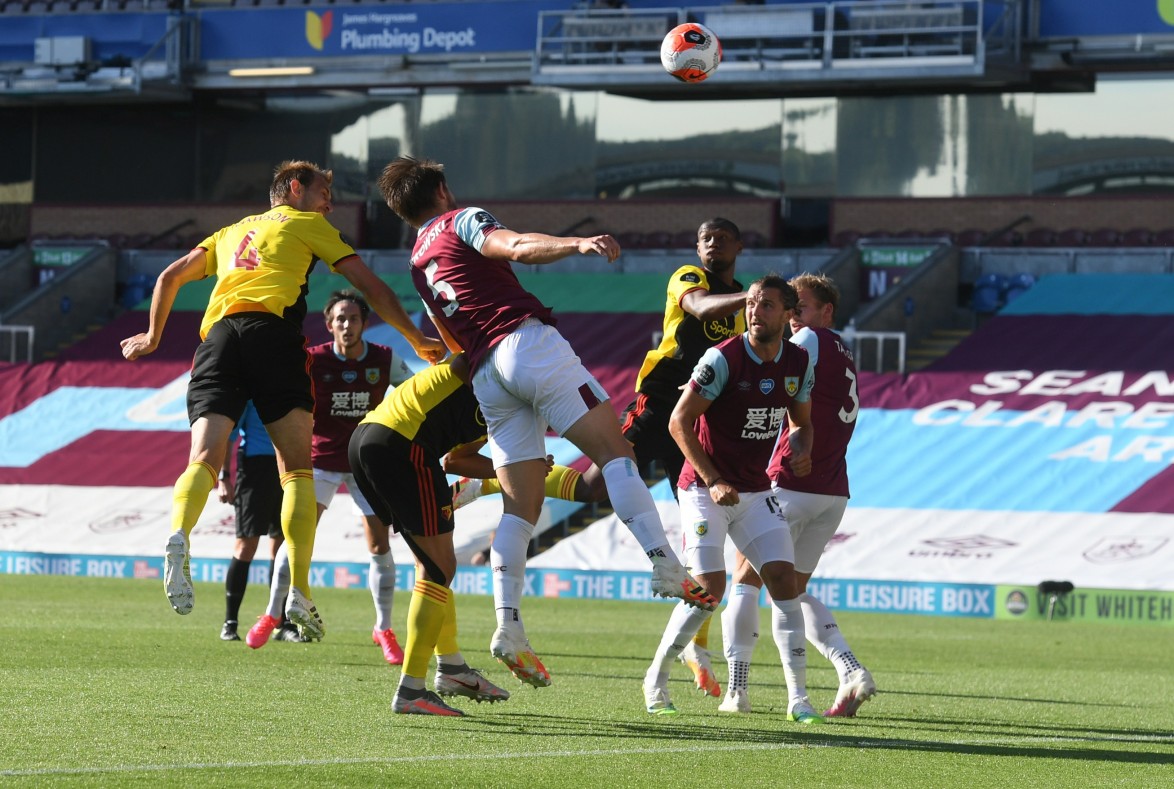 Head Coach Nigel Pearson used the brief interval to reshuffle, to revert to the 4-3-3 he has favoured since he took charge in December. It worked, giving the Hornets a bit more control and a foothold in the game. Not long after the tactical tweak, Dawson, the hero of Saturday, headed a Tom Cleverley corner over the bar. But this was more like it and the away side went into the break with something to hang their hat on.

Keen to use the full depth of his squad during this hectic period, Pearson decided to make two changes at the break, bringing on Craig Cathcart for Christian Kabasele and replacing Tom Cleverley with Abdoulaye Doucouré. Cathcart was straight into his work, winning a firm header from the Burnley restart.

It set the tone for a much more encouraging period for the Hornets. Deeney started to win his headers, Doucouré picked up some nice positions as the more advanced midfielder while Ismaïla Sarr got increased chances to open his legs. The chances started to come. Cathcart had one blocked from close range after Nick Pope, who didn't drop a thing at Vicarage Road earlier in the season, uncharacteristically spilled one and then James Tarkowski made a superb recovery tackle on Danny Welbeck just as the England striker was about to pull the trigger following some terrific link-up play from Troy Deeney. This was more like it. 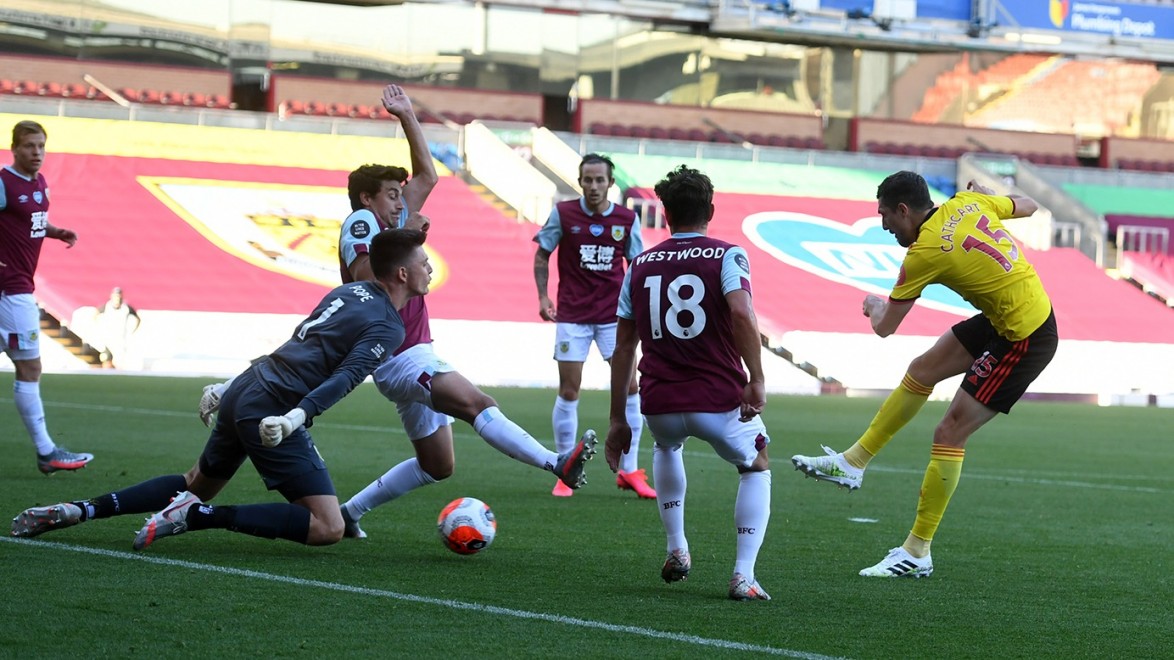 The Hornets came even closer on 66 minutes, the closest they had come so far when Deeney, from a Capoue inswinging corner, had a header cleared off the line by Dwight McNeill. It was a certain goal. With the rebound, Hughes eyed a second spectacular goal at the Cricket Ground End in as many matches here, but he crashed a rising effort over the angle of post and bar.

Pearson won't need reminding you need to take your chances when on top and it was a classic case of that on 72 minutes. Burnley posed nowhere near the same threat as they did in the first half and from nowhere, with virtually their first chance of the second half, Rodriguez stooped to smartly nod in a cross from McNeill. It was a real kick in the teeth as you felt the visitors were the ones who would kick on and win the game at that point.

Shell shocked, the Hornets didn't really muster a response, apart from headers from corners by Masina and Dawson. In fact Vydra could have made it two had it not been for the out-stretched legs from Foster. That would really have rubbed salt into the wounds had Vydra scored.