Watford were left to rue a disappointing first-half showing as they succumbed to a 2-0 defeat in their first away-day of the season at Brighton.

Shane Duffy’s early headed goal came as little surprise to a Hornets side who’d been on the back-foot since the opening moments, and Neal Maupay capitalised on a defensive mistake to double the Seagulls’ lead before the interval.

The Golden Boys will take encouragement from their second-half performance, with substitutes Cucho Hernández and Joshua King adding some much-needed impetus to the team’s attack.

There were opportunities to make a game of it as the match wore on, but the breakthrough never came and Brighton held on to record a second win from their opening two games.

There was a frantic start, with Peter Etebo’s loose pass moments after kick-off encouraging the hosts to attack right from the off, and it was a pace that persisted during the opening stages.

There was some brief respite when Ken Sema drove into the area and forced a Watford corner, but the set-piece came to nothing and Brighton were about to take a 10th-minute lead from a corner of their own.

Duffy outjumped Adam Masina to fire a bullet header onto the underside of the bar, leaving Daniel Bachmann no chance as it bounced over the line in an early blow for the Hornets.

Ismaïla Sarr fancied his chances of a quick equaliser, collecting a loose ball 20 yards from goal and shooting high of the target, but it was a rare sight of goal for an otherwise second-best Watford side during the opening half.

Despite their dominance, there was an element of luck to Brighton’s second goal. William Troost-Ekong under-hit a pass to Tom Cleverley, allowing Yves Bissouma to nip in and tee up Maupay, who had the simple task of slotting past Bachmann four minutes shy of the break.

Watford needed something to change, and Xisco Muñoz opted to withdraw Imrân Louza 45 minutes in to his first Premier League game. Hernández took his place, with Ken Sema dropping into a midfield three deprived of the injured Juraj Kucka as well as Dan Gosling and Nathaniel Chalobah, both suffering with sickness. 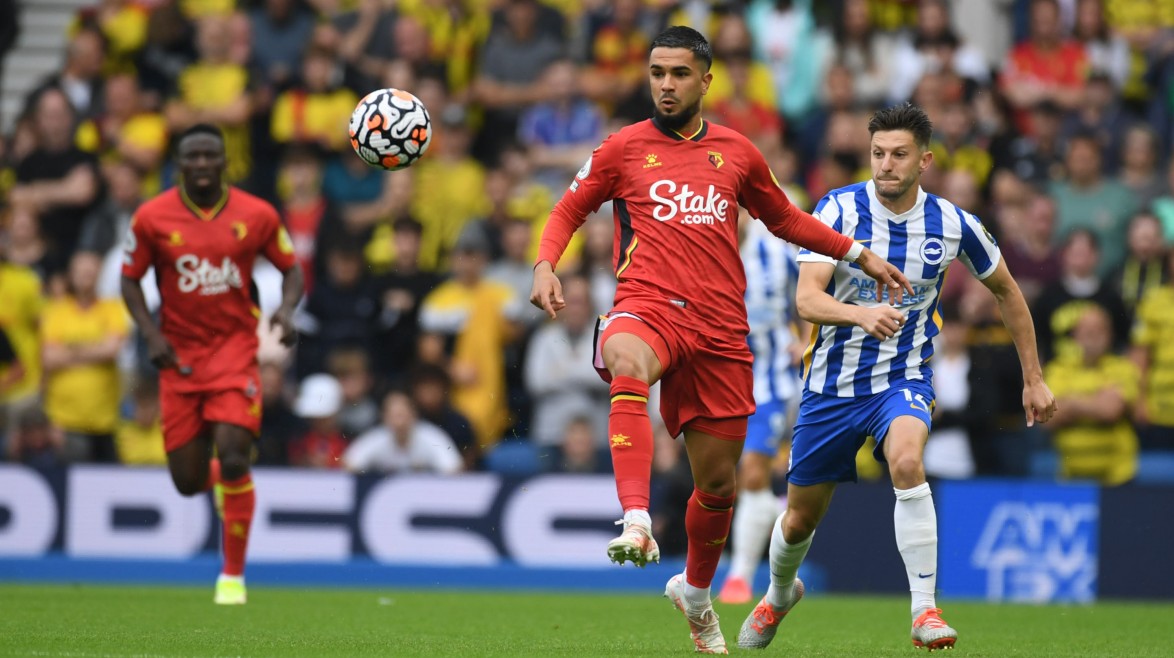 Brighton looked sure to score a third 52 minutes in, Aaron Connolly lashing wide from the centre of goal when a cross from the right bounced off Craig Cathcart’s shin.

Despite a lack of clear-cut chances, the Hornets were posing more of a threat and Cleverley forced a low save from Brighton keeper Robert Sánchez following a clever Sema flick.

Nigerian forward Emmanuel Dennis then timed his run just wrong, racing onto substitute King’s through ball, turning his man and finding the net, but the assistant referee’s flag was already raised.

Buoyed by his stunning debut strike against Aston Villa a week ago, Hernández was in the mood for the spectacular once more but this time his volleyed effort from 20 yards flew just over the bar.