Relegation was confirmed at the Emirates this afternoon but whatever you think about the previous 37 games, the team could certainly not be accused of going down without a fight.

They looked absolutely dead and buried after conceding three goals in 33 first-half minutes, including a penalty from virtually Arsenal's first attack. They staged a thrilling recovery, scoring through Troy Deeney before half-time and Danny Welbeck two thirds of the way through the game, to open the door to one of the greatest rescue acts the Premier League has ever seen. They certainly created enough chances from 19 shots on goal (taking the tally to a staggering 50 in two matches against the Gunners) to draw level and even win the game in an all-action, gung-ho second-half performance.

But, just like they had done with a 11-game winless start to the season, the Hornets left it all too late. They waited too long to produce their best performance since the restart and they were relegated by a point. One measly point. How terrifyingly small the margins can be at this punishing level.

They just gave themselves too much to do, from the start of the season and this afternoon. As starts go they don't come more damaging than the one that materialised at the Emirates. You couldn't make it up. From Arsenal's very first attack, Craig Dawson piled into the back of Alexandre Lacazette. Lacazette stayed down for an age so Mike Dean asked for the incident to be checked. After a near four-minute delay, VAR official Lee Mason pointed to the spot from his position near the halfway line as everyone had filed into position for a goal-kick. Pierre-Emerick Aubameyang doesn't miss those and he rolled the ball in from 12 yards, sending Foster the wrong way.

It was the sort of start that could have sent the team under, but now very much with nothing to lose, the team completely threw off any shackles and went for broke. How they weren't level by the 20-minute mark was a complete mystery. Not only did they force four corners to the home side's none, they fashioned three very presentable chances.

There was an overhead kick by Ismaïla Sarr, a side-footer at the far post from Roberto Pereyra that Emiliano Martinez had to save last-ditch with his legs and then a goal-bound header from Troy Deeney that slammed Rob Holding straight in the face. The defender knew nothing about it. 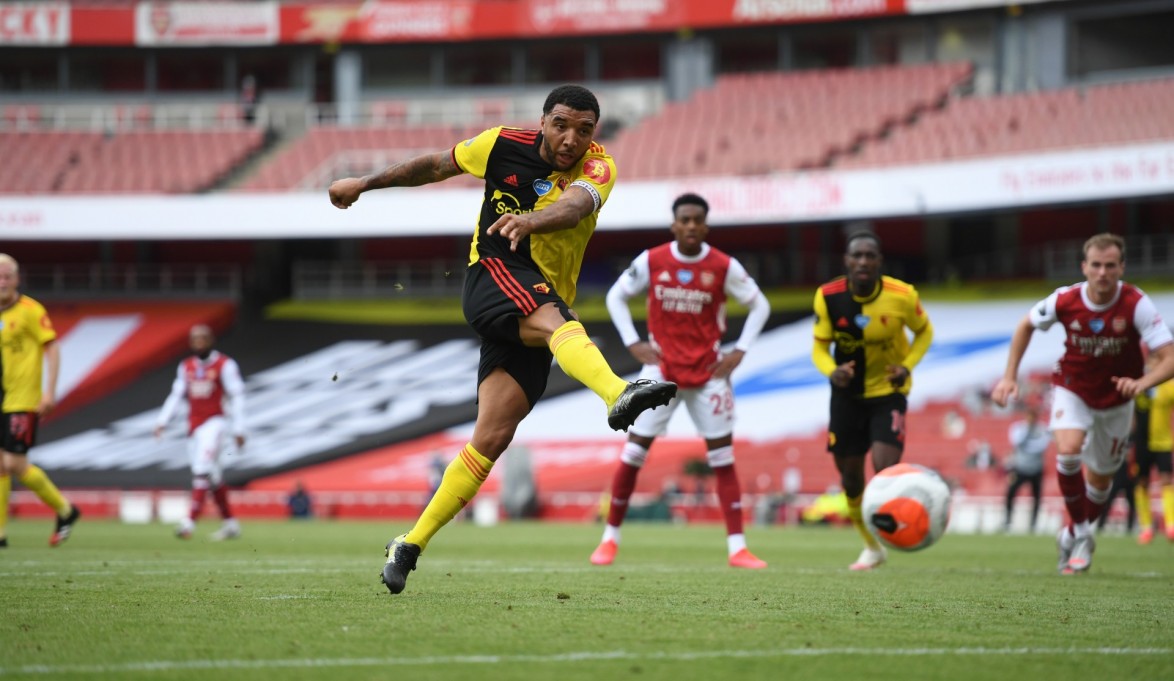 Watford played as well here last season as they ever have done in September 2018, but paid the price for not taking their chances, conceding two goals in the last ten minutes. They paid the same heavy price here, with Arsenal scoring with what felt like their second attack on 24 minutes. Kieran Tierney threaded one past Foster via a deflection from Christian Kabasele.

What felt like an uphill task become a mountainous one when Aubameyang pounced on a bouncing ball in the box to acrobatically crash one past the helpless Foster. You wondered and feared how many Arsenal might get at that stage.

With just pride seemingly left to play for, the Hornets did pull one back before the break with a nerveless penalty from Deeney after a foul by David Luiz on Danny Welbeck. The captain nailed it to the left of Martínez, who had stood relatively still in thinking Deeney would smash it straight down the middle. It was his 31st successful spot-kick for the club he joined ten years ago. It was the very least the Hornets deserved for a spirited attacking performance.

A second goal was going to put the cat right amongst the pigeons. And they nearly got it five minutes after the break when Masina smashed one over following a goal-mouth scramble. There was then a corner that Dawson and Christian Kabasele came within a whisker of getting on the end of. And how Martínez managed to save one from close range from Welbeck, following some terrific interplay with Deeney, would have taken some explaining in a goalkeeping coaching clinic with Graham Stack and Foster. 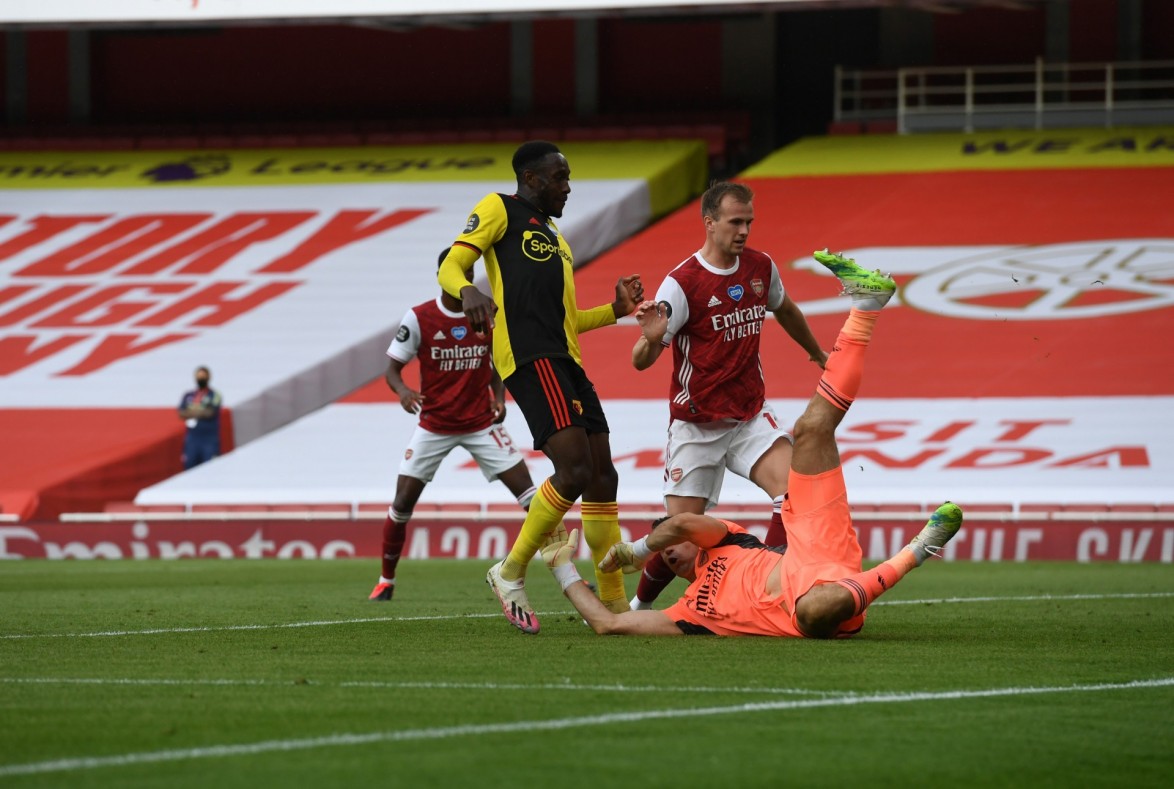 Welbeck was still shaking his head when Sarr rolled one across the face of goal minutes later for the former Arsenal striker to gleefully tap in. Game on and Arsenal knew it.

Pereyra curled a beautiful free-kick just past the post; Welbeck came within a whisker of converting an appetising cross from Sarr with a backheel and the England striker then found himself with a great shooting chance on the left. It was all Watford. The Gunners were rocking.

Foster, meanwhile, was doing his bit to ensure the Hornets didn't require snookers, pulling off a stunning one-handed save to deny Ashley Maitland-Niles and then another to deny Aubameyang a certain goal. It was a-thrill-a-minute stuff.

Still the Hornets kept coming, hurling the kitchen sink, the dishwasher and the fridge freezer at the home side, but events at the London Stadium in the game between West Ham and Aston Villa meant they needed two goals and that was just too big an ask. This will hurt for some time to come.