Emile Smith Rowe's second-half strike was all that separated Arsenal and Watford at the Emirates Stadium, as the Hornets were defeated 1-0.

Arsenal had an early goal ruled out for offside, and a penalty saved by Ben Foster in the first half.

Smith Rowe netted close to the hour mark to make the difference, and despite sustained pressure in the second 45 the visitors couldn't find an equaliser.

The hosts started the game the brightest of the two sides, but Moussa Sissoko did well to prevent an early opener. Albert Sambi Lokonga dinked a pass over the defence to Alexandre Lacazette, but the Frenchman was denied by his compatriot’s last-ditch tackle and clearance.

Not long later, the ball did end up in the net. Lacazette’s initial shot was tipped away by Foster, and Pierre-Emerick Aubameyang was able to pass to Bukayo Saka to slot home, but the England international was ruled offside after a lengthy VAR check.

The Gunners continued to control the tempo, but Watford had potential on the counter and were withstanding pressure. There were fouls and bookings aplenty, with two yellows apiece in the first 45.

Emmanuel Dennis looked to spark a counter attack after Arsenal’s penalty cries were waved away by referee Kevin Friend, but he was brought down. Juraj Kucka picked up where his teammate left off, driving forward before Sambi Lokonga earned his yellow by fouling the Slovakian midfielder.

Ainsley Maitland-Niles’ effort from range didn’t threaten Foster, but moments later the home side were awarded a penalty when Danny Rose caught Lacazette as the two fought to win the ball. 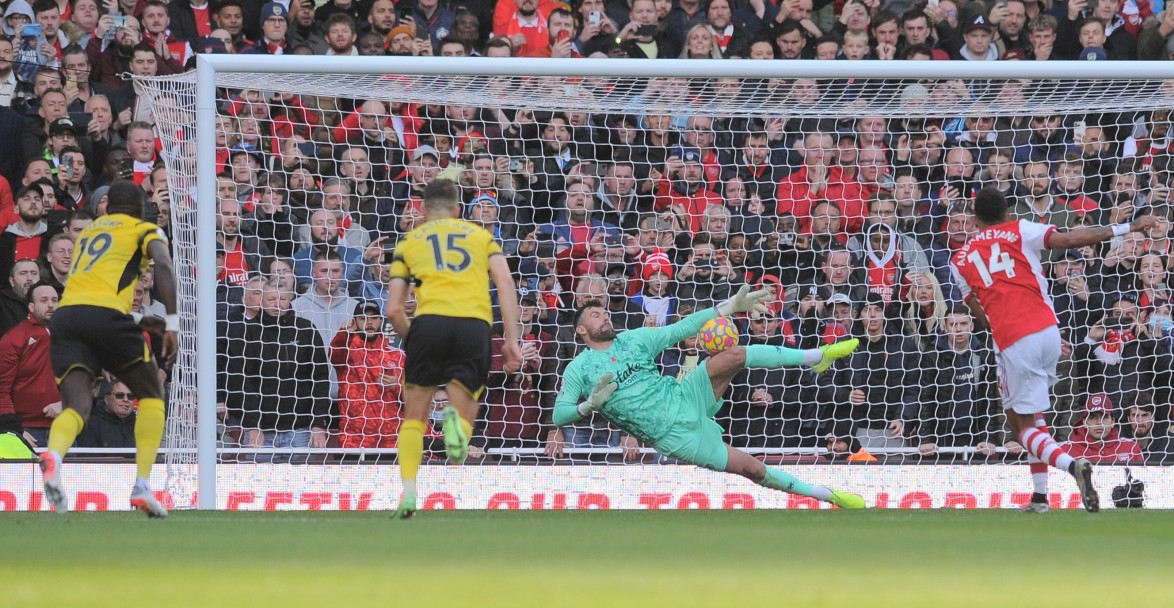 Aubameyang stepped up for the penalty, as he did in the final game of the 2019/20 season against the Hornets, but this time Foster made a terrific save to deny Arsenal’s talisman.

Minutes later Kucka went close to the target at the other end, stealing possession from Sambi Lokonga, dribbling away from Nuno Tavares’ slide-tackle and firing at goal, with Benjamin White’s decisive touch deflecting the effort wide.

Foster was back in action and on hand to prevent a goal late in the first period. Gabriel Magalhães jumped at the back post to head goalwards, but Watford’s No.1 reacted well to save. 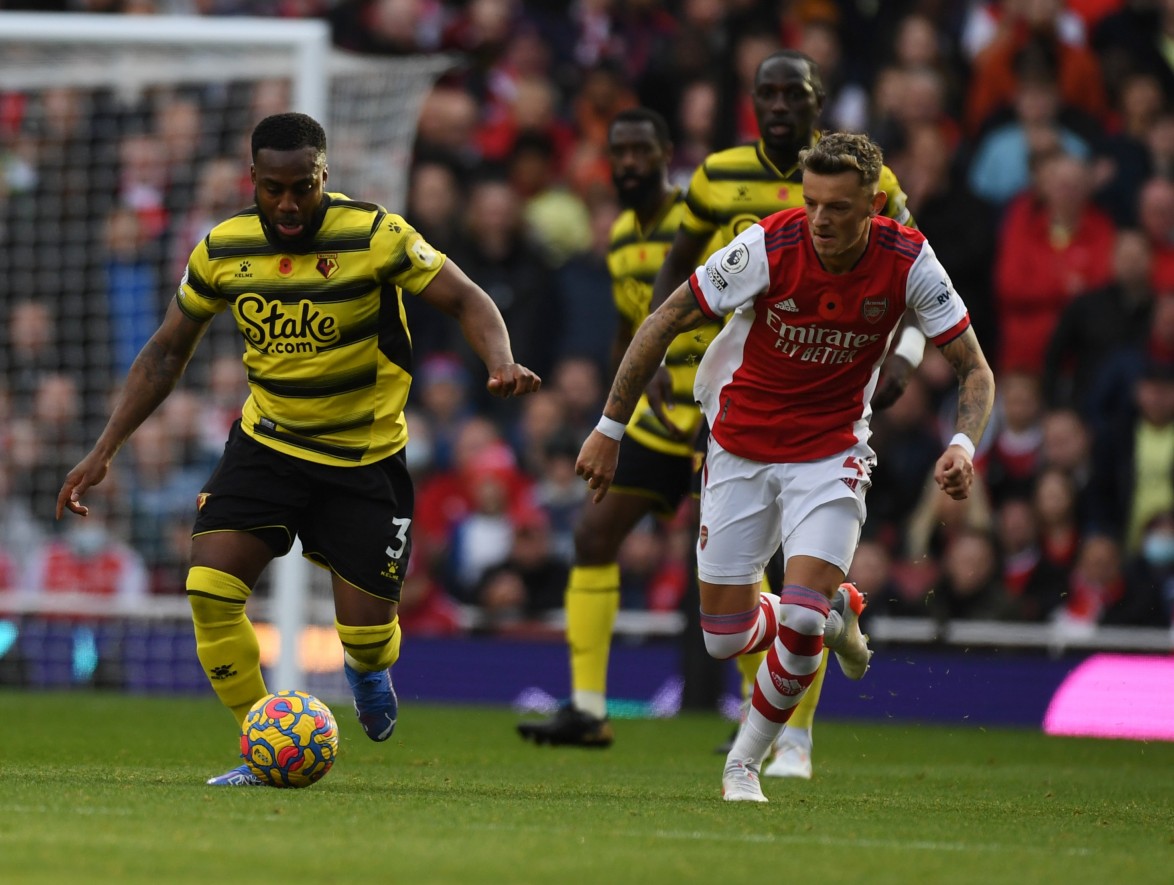 It was an intense start to the second half. Sambi Lokonga’s shot was saved by Foster, Smith Rowe went close to scoring and at the other end Dennis had a good chance to put the Hornets ahead.

Eventually, it was Smith Rowe who broke the deadlock in scrappy fashion. Watford were defending all attacks from the home side, but as Ismaïla Sarr looked to move the ball forward he was tackled, and the Arsenal youngster shot first-time, beating Foster.

Following the goal Watford were managing to get into the final third more, and the introduction of João Pedro from the bench helped to increase the attacking fluidity. The Brazilian’s cross found Joshua King after good link-up play with Rose, but the Norway striker’s attempt was blocked. 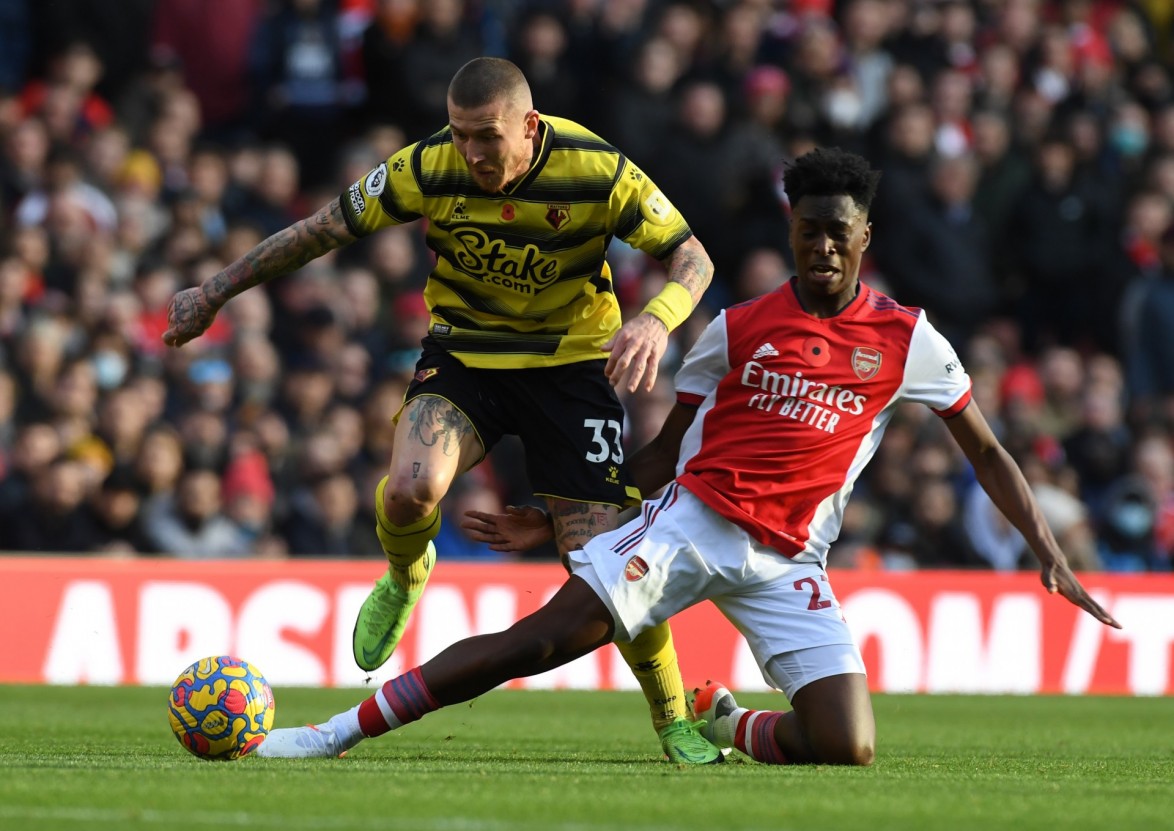 Substitute Martin Ødegaard thought he’d doubled his side’s lead with 20 minutes to go before his celebrations were cut short. Aubameyang had got the final touch and was offside.

Late on in the game King was inches away from a crucial equaliser. He managed to get around goalkeeper Aaron Ramsdale on the left flank after a defensive mix-up, but the angle was too tight to convert and it struck the side netting.

Kucka was given a second yellow in the final minutes, and was sent off by referee Friend after a challenge on Tavares.

Sambi Lokonga's powerful shot from the edge of the box forced Foster to make a final impressive save, and the introduction of Ashley Fletcher demonstrated attacking intent.

Claudio Ranieri’s side fought to the death and the thousands of away supporters were in full voice until the final whistle, but Watford left the Emirates empty handed.

The international break means the Golden Boys aren’t in action next weekend. They face Manchester United at Vicarage Road next on Saturday, November 20.