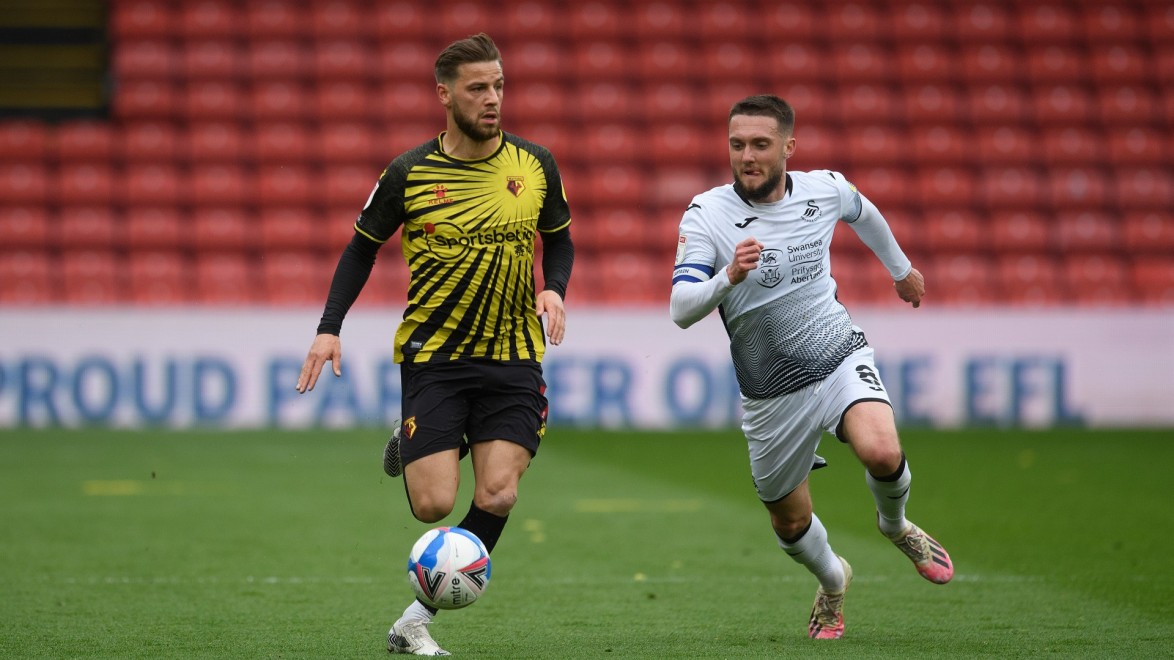 Who inspired you to become a professional football player? (d.howard2018)

“As a kid I wasn’t actually so much into football. I played a little bit of tennis for a couple of years, but my two older brothers were playing football and I was often watching them, so I think it was actually them who inspired me to start playing myself when I was six or seven. Since then, there have been a few players I’ve been a big fan of, but the first person who really inspired me was David Beckham. I was a Manchester United fan as a kid so Beckham was my biggest idol, and after him it was Cristiano Ronaldo. The way Beckham crossed the ball was amazing and as a kid I tried to look at his technique and how he did different crosses. Hatem Ben Arfa too. He was a really talented player, but I think I would go for Messi or Ronaldinho.” 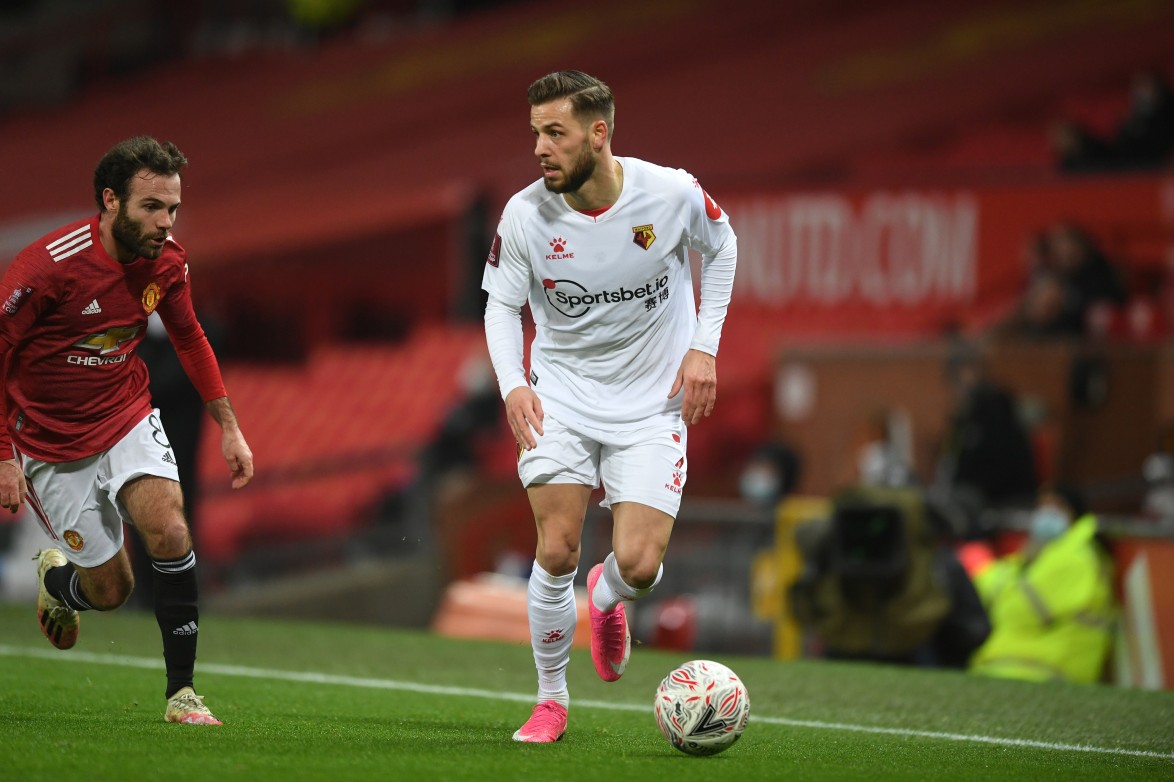 If you could play alongside any player past or present, who would it be and why? (Kαι)

“Like I said, Beckham was my idol so maybe him, but I would probably go for either Messi or Ronaldinho. They were just on a different level and so much fun to watch. I have always been hugely inspired by Hatem Ben Arfa too. He was a really talented player, but I think I would go for Messi or Ronaldinho.”

“I played in Denmark for a few years with two former national team players. One was a left-back called Simon Poulsen, who used to play in Holland and was getting old when I played with him for SønderjyskE, but you could just see that he was such a good player. I also played with a midfielder called Niki Zimling, who had played at clubs like Ajax and Club Brugge and in Germany as well, and he was a fantastic defensive midfielder at his prime. Last season I played at Bodø/Glimt with a midfielder called Patrick Berg and he was a fantastic goalscorer. He’s still there and he is still very young, but I think his future will be big. There are also a lot of good players here at Watford, but I have only been here for a short while.”

How long do you need to get ready? (Dan Bachmann)

“I should’ve known Dan would ask a question! If he really wants an answer, maybe half-an-hour if it’s before a game because I have kind of a routine. They pick on me because I use hairspray before games, but it’s only because I don’t want my hair going down in front of my eyes. It’s so I can perform better.” 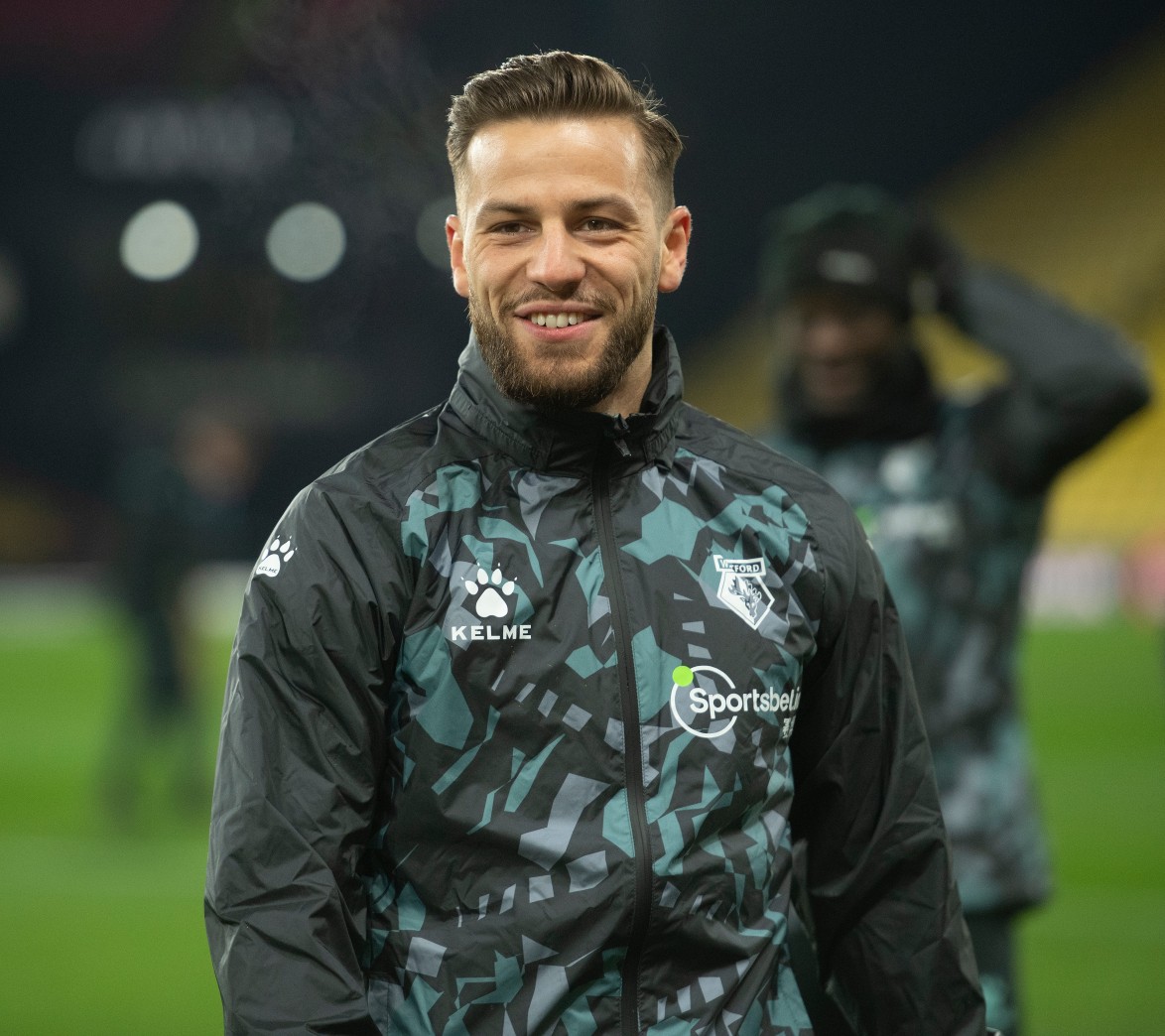 Why do you always have to go to the bathroom when we’re asked to do the dishes? (williamzinckernagel)

“That’s one from my little brother! I can tell you for sure that if he thinks I do it, he’s learned well from me as he does the exact same. I haven’t lived with him for a while now, it must be 10 years at least. We have quite a few brothers in my family and they all say I’m quite lazy, but it’s not true.”

Is it true Celtic wanted to sign you, and were there any other English clubs interested? (Harry West)

“We never got close to signing any deal with Celtic, but there was a lot of talking and a lot of interest, so it was something that I had to consider, for sure. There were a few Championship clubs interested as well, but nothing that attracted me as much as Watford did. Watford were a much bigger club and it was an easy decision in the end.”

Any comments on your initiation song? (purv7911)

“Terrible! It was ‘Follow Me’ by Uncle Kracker. I actually asked two of my friends what to sing. I would never really go for a song like this, but I thought I’d do it because it is a bit of a singalong. Looking back though, it was terrible. I could see that Ben Foster was filming me, but it was getting up on the chair and seeing all those faces that terrified me. It’s not my proudest moment, but I survived.” 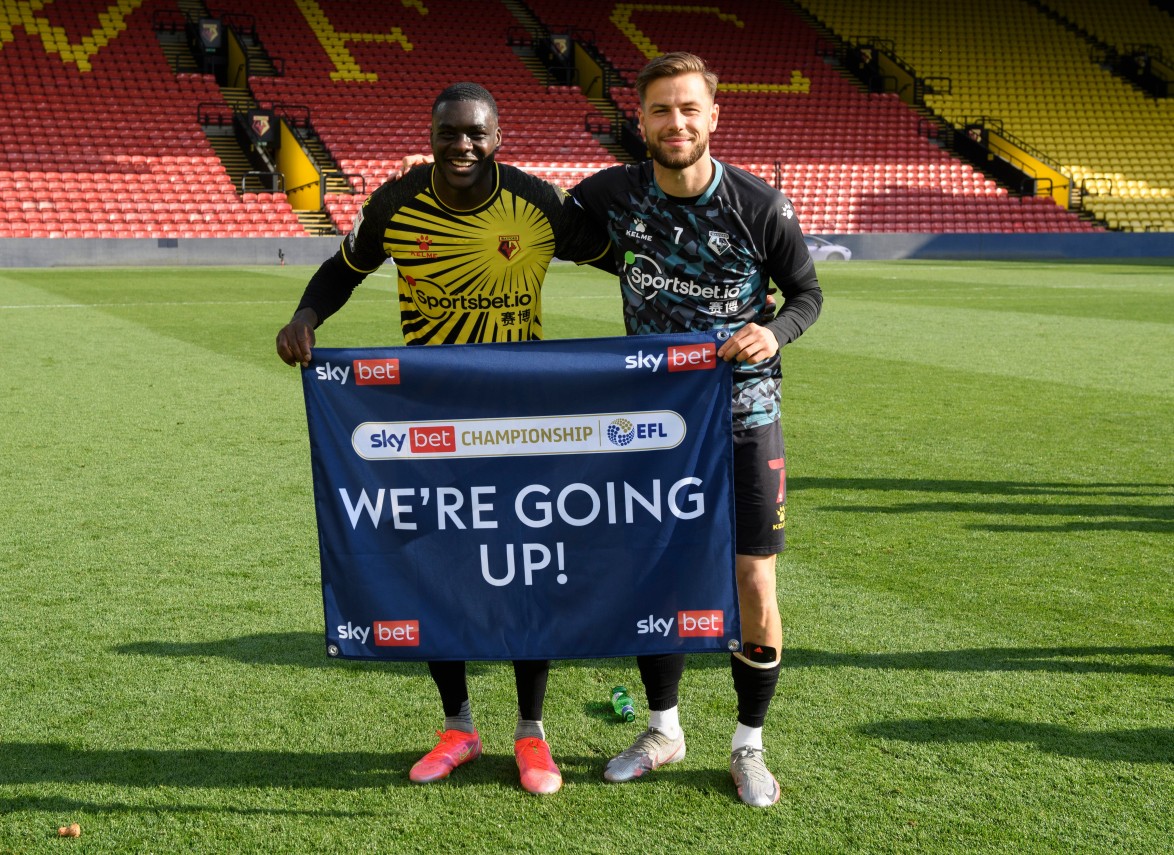 Who has helped you settle in the most? (j4m3s_football21)

“Everyone around the club has been very kind and making sure everything is going okay for me. I speak a lot with Ken Sema as he’s Swedish, so we kind of understand each other in our national language, but there’s been a lot of kind guys and it’s been quite easy settling in.”

How did you feel about Ismaïla Sarr giving you your first goal for the club against Bristol City? (Zak Dunn)

“He could have shot for himself, so it was fantastic and of course I was very grateful. I gave him a big hug afterwards! It’s always nice to get a goal quite early in your time at a new club, so that was really unselfish of him. I think we have a great team spirit here and this is just one example of it.”

If you could choose the Watford formation and your favourite starting position, what would they be? (ellisdavid1977)

“I really like this 4-3-3 formation, whether that’s as a winger or a midfielder. Maybe the perfect fit for me would be to play the number 10 position and to make a triangle with the six and the eight, but at the moment I am really enjoying playing as a midfielder or a winger. At my last club I played on both flanks and I would float around a lot, sometimes even coming inside to more of a number 10, but it doesn’t really bother me where I play. I do think the 4-3-3 is the best shape for me, though.”

Are you excited for the return of the fans? (Claire Scott Bothamley)

“It’s going to be so nice. The fans and the atmosphere are one of the reasons why I wanted to come to England, so I’m really looking forward to it. I’ve heard so many positive things about Watford fans and English fans in general, and all the stadiums are just on a different level. When you come to a new club you want to feel the fans and have them involved. You want to feel the tension sometimes, so it’s very difficult and I’m looking forward to their return.” 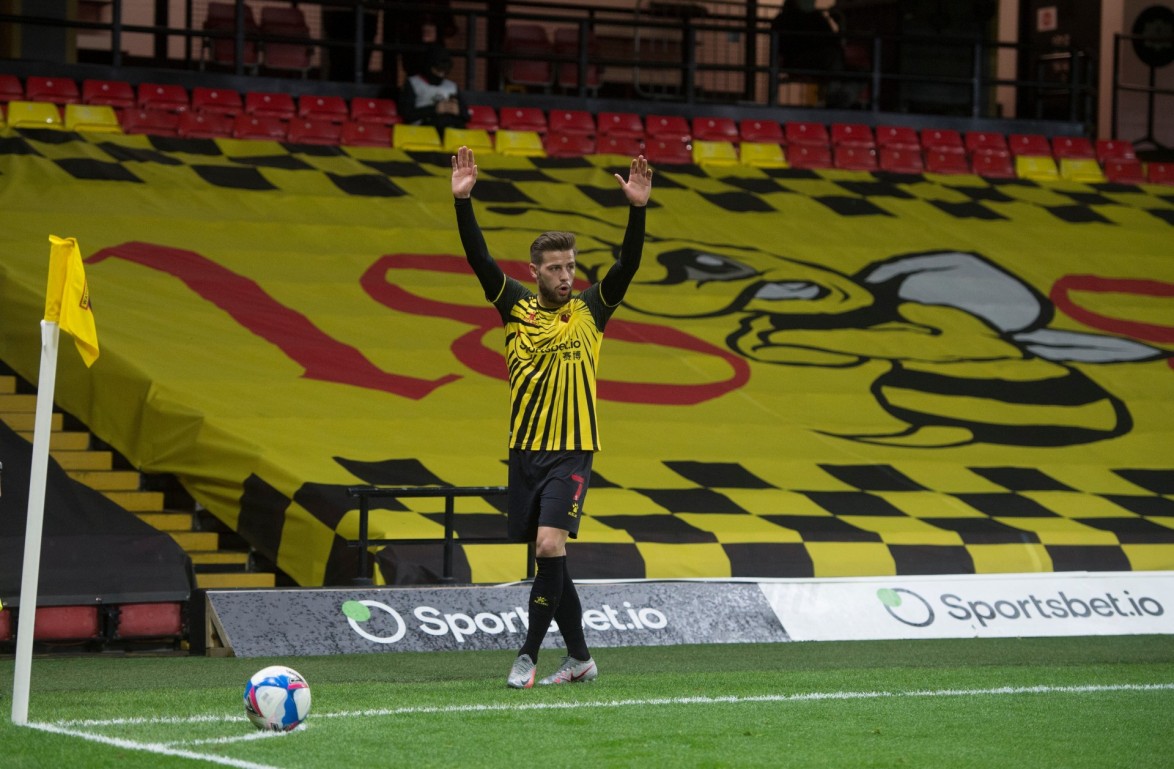 We're trying to work out a crowd chant for you, for when fans return, but nothing really rhymes with Zinckernagel. Any ideas? (trevormerriden)

“I know that must be difficult! I’ve had a few songs at my previous clubs so it is possible, but you probably need to cut my name down to something like Zinck or Zincker to make it easier.”

Which lessons from the Eliteserien have you brought with you to playing in the Championship? (David Strøm)

“I don’t know if I can call it a lesson, but the whole experience of winning the championship [in Norway] and being dominant has been helpful. We came second in my second season and then last season we came first, so that experience of being at the top and winning a lot of games is something I try to bring as it means I feel quite comfortable and confident when I play for Watford. I feel like I already have that winning mentality from being in a winning team for the last two seasons.” 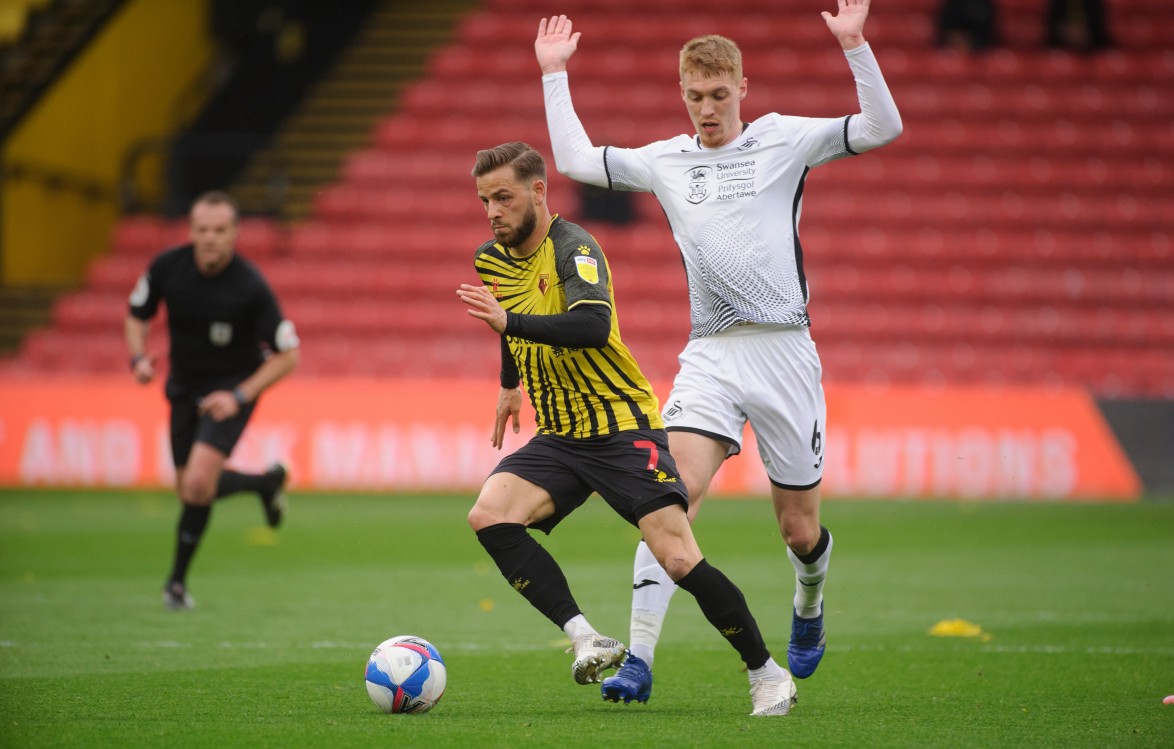 How have you found the style of football in the Championship compared to the Eliteserien, and which of your former Bodø/Glimt teammates do you think could do well in England? (Andy Nash)

“The physicality and the tempo are higher, but the type of football is quite similar. A lot of games in Norway are just back and forth, which is similar to the Championship, but the tempo here is higher, which makes it a stronger level. You can feel there is more at stake here with Watford too. At my previous club there wasn’t really any pressure on us, but now I feel it and you can tell it is about more than three points for the opposition too. As for my former teammates, Patrick Berg could certainly become a good player in England. He’s just played a few games for Norway and he did very well. There is also a young left-back called Fredrik André Bjørkan who could be a good player here, because of his physicality and his drive.”

Which game do you rate as your very best for Bodø/Glimt, and which goal? (Oraklet i nord)

“Maybe my best was our home game against Rosenborg, the biggest team in Norway. It was one of the last games of the season and we won 5-1. I had three assists and one goal, and that was probably one of my better games. I also had a derby game the season before last against Tromsø IL when I scored two, and that was a fantastic game. My best goal is probably either one against Bryne FK away, or a goal I scored away at Salzburg.”

What is your favourite Danish food that Brits wouldn't understand? (Lars Højben Lysén)

“One of the things I really love is Rugbrød, which is a dark bread. There are a few Danish bakeries in London that probably serve it. Another Danish tradition is open-faced sandwiches. They’re very nice and I’m sure you can find them somewhere in London.”

What do you make of English coffee? (tedhawthorn)

“I’m a very big fan of coffee and so far it’s been pretty okay. I live in Hampstead and there are a few coffee shops which make good coffee, although I don’t think it’s actually coffee from England. The coffee shops are pretty good, so I’m looking forward to visiting a few more in London soon.”