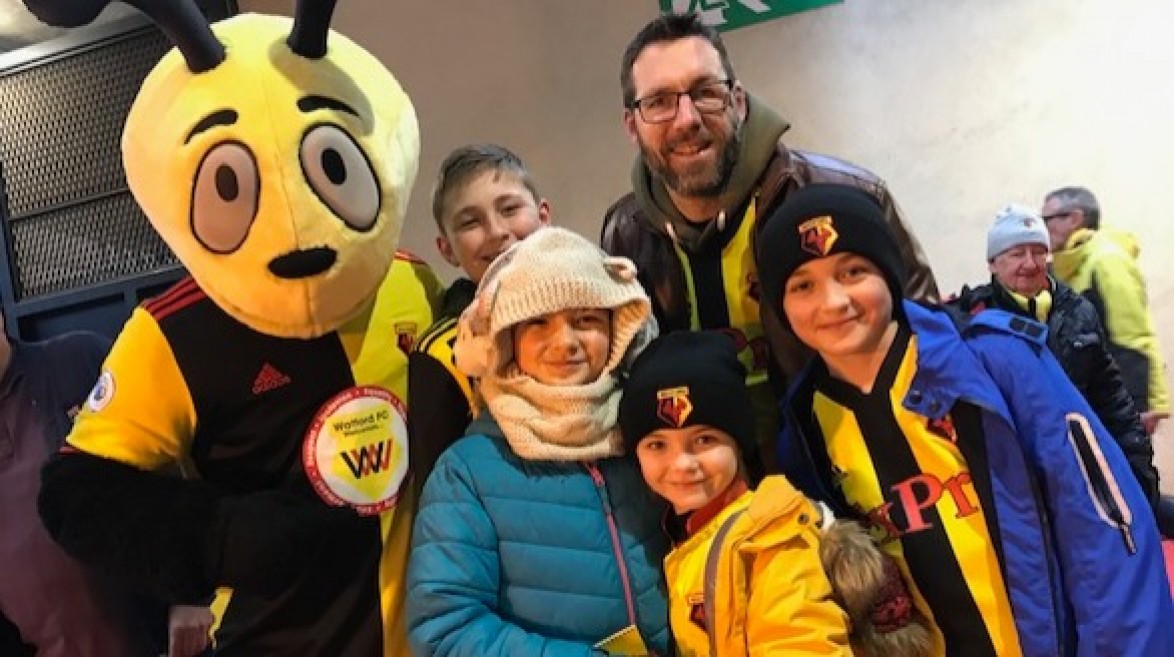 Professional football might be suspended due to the ongoing national lockdown, but the exploits of one family of Hornets supporters meant more than 10 million people still turned on their screens to see the yellow flash of a Watford shirt last month.

The Marsh family became a viral sensation when their living room rendition of Les Misérables hit ‘One Day More’ was shared across the country and the world. Television appearances on This Morning, BBC News and Jimmy Kimmel Live followed. But why was it that 12-year-old Thomas Marsh was wearing the yellow and black stripes of our 2018/19 kit during the original performance?

“We said everyone could have one thing in the video, so I had my bottle of beer, Alfie stuck a flag on a pole, Tess had the phone – which was a big deal for her!” said Ben Marsh, father to Alfie, Thomas, Ella and Tess and husband to Danielle. “We said to Thomas he could put a kit on, and he always wears his Watford kit, so it was the natural thing to do. The drawers in our house are full of kit, I can never bring myself to throw it away!”

If somehow you haven’t yet seen the Marsh family’s video, you might wonder how these props could possibly complement a song set in a revolutionary period of 19th century France. Well, in the Marsh family’s version, the song’s lyrics were cleverly altered by Ben to reflect the everyday struggles of family life during the ongoing coronavirus lockdown.

“I wrote the original lyrics which were assembled from all the different ways in which people have been complaining over the past few weeks, like online deliveries and the kids being overwhelmed and them not seeing that we were also overwhelmed,” said the father of four.

“The idea is that it’s okay to be grumpy about it and it’s okay to make fun of it. The situation we’re all in is really frightening and serious. We, like everyone else, have been watching the news like a horror film every night and thinking about the economy and our jobs and it has felt very relentless and overpowering and if you start to make fun of something I think that’s the first step you take towards sort of dealing with it, and that’s what we’ve always done at home.

“We’re not key workers and we’re hugely admiring of everyone who is. There’s not much we can do because we’ve got four kids at home, beyond volunteering and phoning and that kind of stuff. So, being able to give people a laugh is definitely a positive thing, and it’s okay to find things funny and enjoy singing at home, because when we lose that it’s kind of game over.” 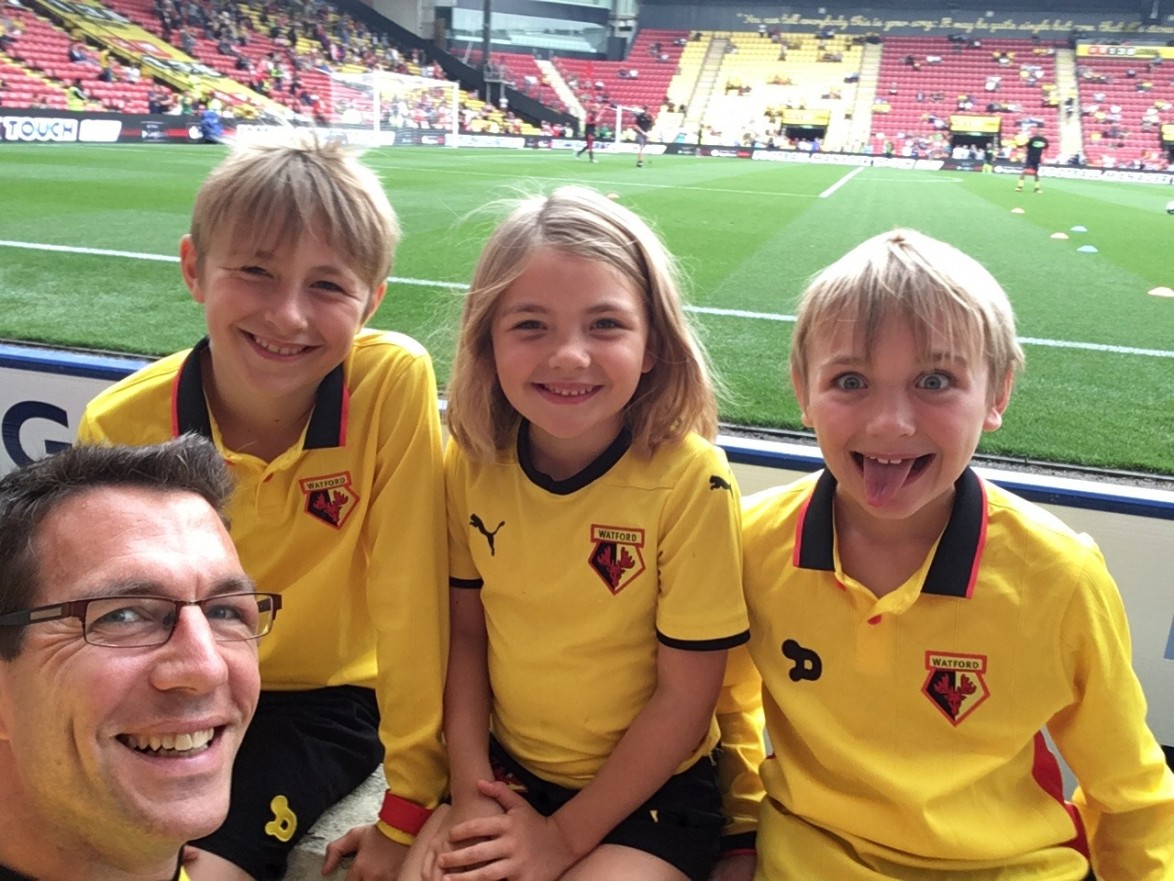 One of the everyday struggles brought up in the video is not being able to play or watch football and, as Thomas explains, that’s where the Watford kit comes in.

“Me and my brother have been missing football a lot recently and one of our main complaints is that we can’t go and play football,” said Thomas, who proudly donned his replica kit during the song. “I thought it would be nice if I wore the football shirt to display what I was trying to get across in the lyrics. We’re really big fans of Watford. The kit was my Doucouré top from last season – we basically update our kit every two years!”

The Marsh family live in Kent, with Ben and Danielle both working at Kent University, meaning it’s quite the round trip for the four season-ticket holders in the household. But their deep-rooted connection to the club stems from Ben’s father, who used to go to even greater lengths to watch the team under Graham Taylor.

“My dad really has the original Watford connection because he used to live in Amersham,” explained Ben. “Since I was a kid, we used to live in Devon, and I can’t believe we did this now, but we did five-hour round trips to see Luther and co back in the early 80s. I have vague memories of long journeys in the car, and we had seats right next to the tunnel where the players came out. To this day I still get goose bumps when I hear Z Cars. 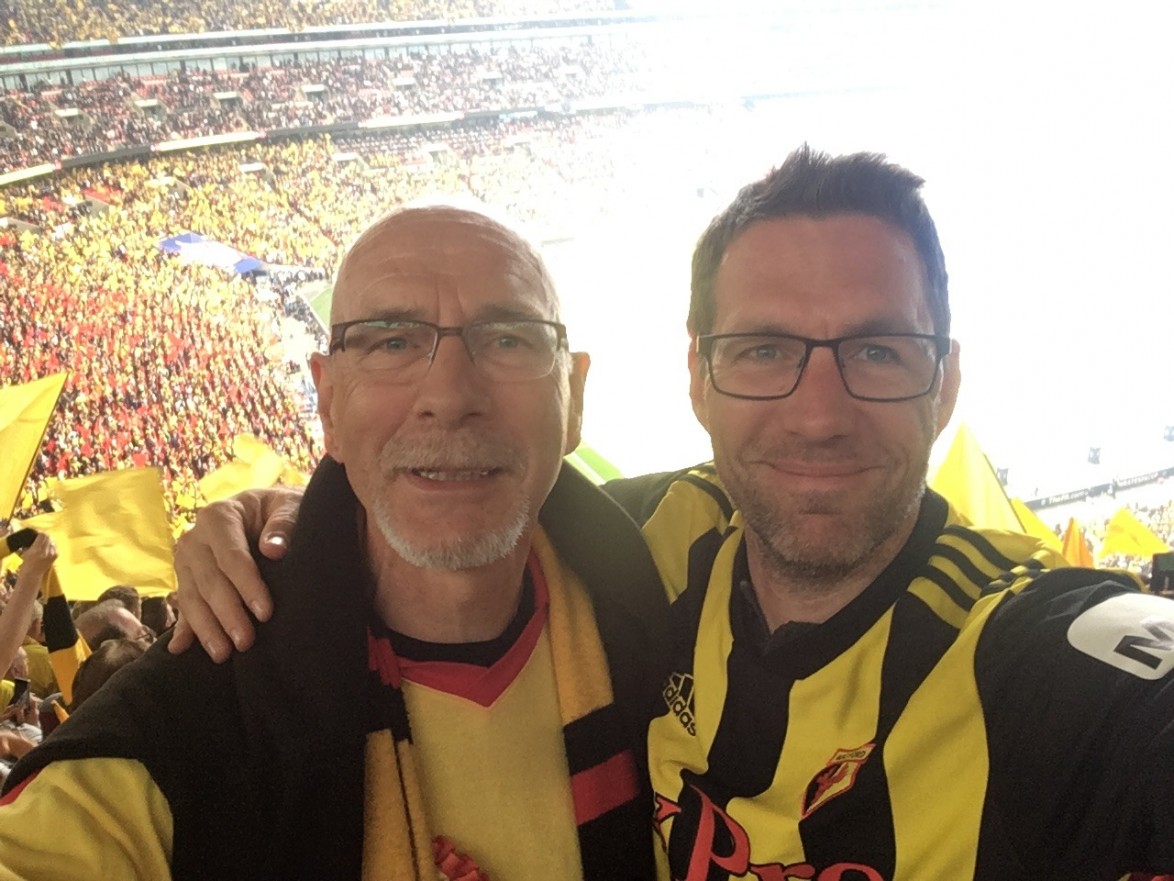 “Even though we moved to Scotland and back down to Kent, the kids have all been Watford fans as they’ve grown up. Obviously being a season ticket holder in Scotland wasn’t going to work but once we moved back to England in Kent and it was only an hour and a half away again, it made sense. Me, my two sons and my eldest daughter are season ticket holders in our immediate family. Tess, the youngest, came to her first ever game on New Year’s Day for the Wolves game, which was a brilliant match.

“As a Dad, it’s been great to see how the kids are interested and inspired by the footballers, more than just trying to get three points. It’s part of this wider idea of a bigger community that people feel a part of and we all suddenly need now, because of being locked away by ourselves. So people are remembering a bit what community feels like, whether it’s because they’re chatting to neighbours in a different way to before lockdown, and it feels like Watford has always been that way for us anyway. It’s been a community that we’ve always been a part of and we know has been out there.” 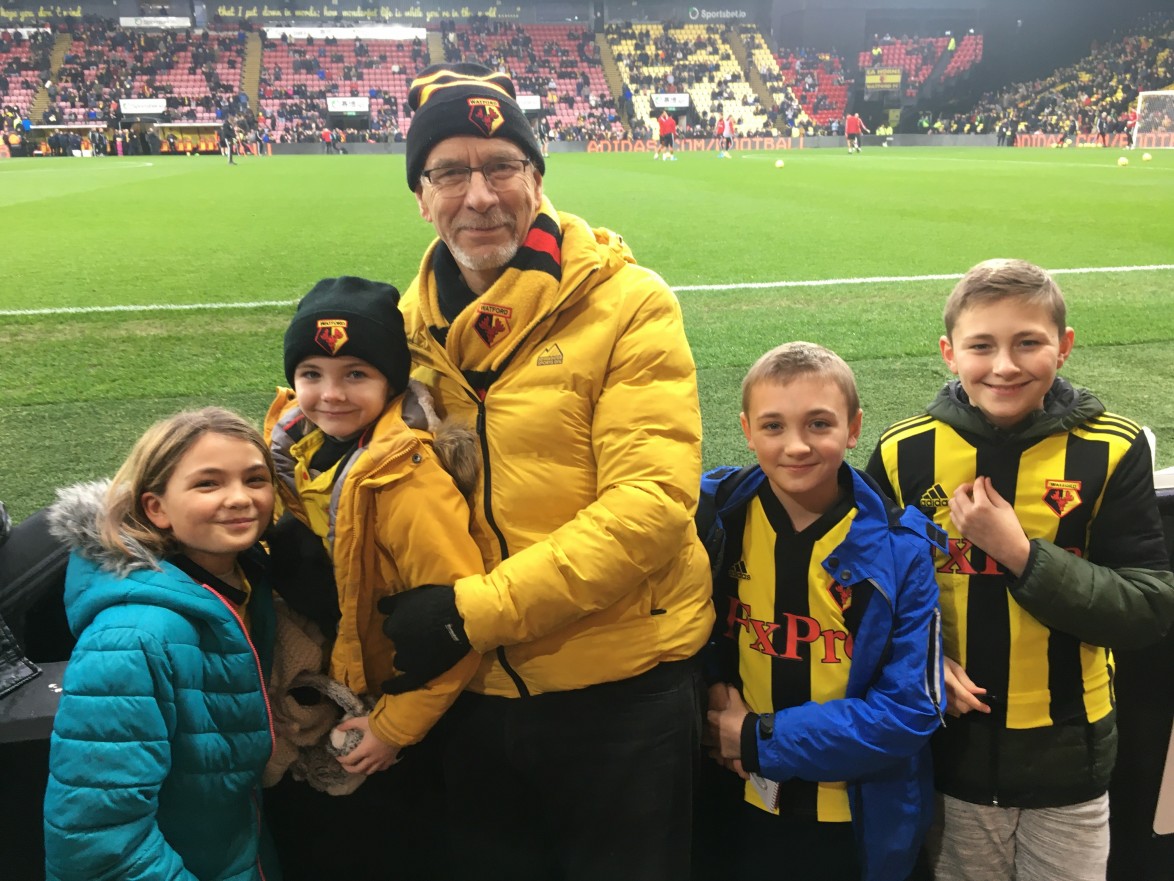 Ben’s parents are also the reason for the family’s music connection, and this wasn’t the first production they’ve recorded together in the household.

“My Mum and Dad are both music teachers so on my side of the family there has always been loads of music around,” Ben explained. “We’ve never done anything professional, we’ve never had training, but there’s always been plenty of music in our lives because of my family background, so the kids have probably got more confidence than they would have had, but they’ve never been to stage school or anything like that.

“We’ve recorded videos for two or three years, since Tess was able to sing or play an instrument, and we’ve tended to do things for Christmas or the grandparents’ birthdays. We definitely try to use the music to try to keep them occupied, keep them going and keep everyone smiling as a family. We always try to pick songs the kids know and like, because there’s no point trying to make them do something they’re not interested in. It didn’t feel like there was any pressure at all, and we could just have a laugh with it and make fools of ourselves, not realising that 10 million people were about to see it!” 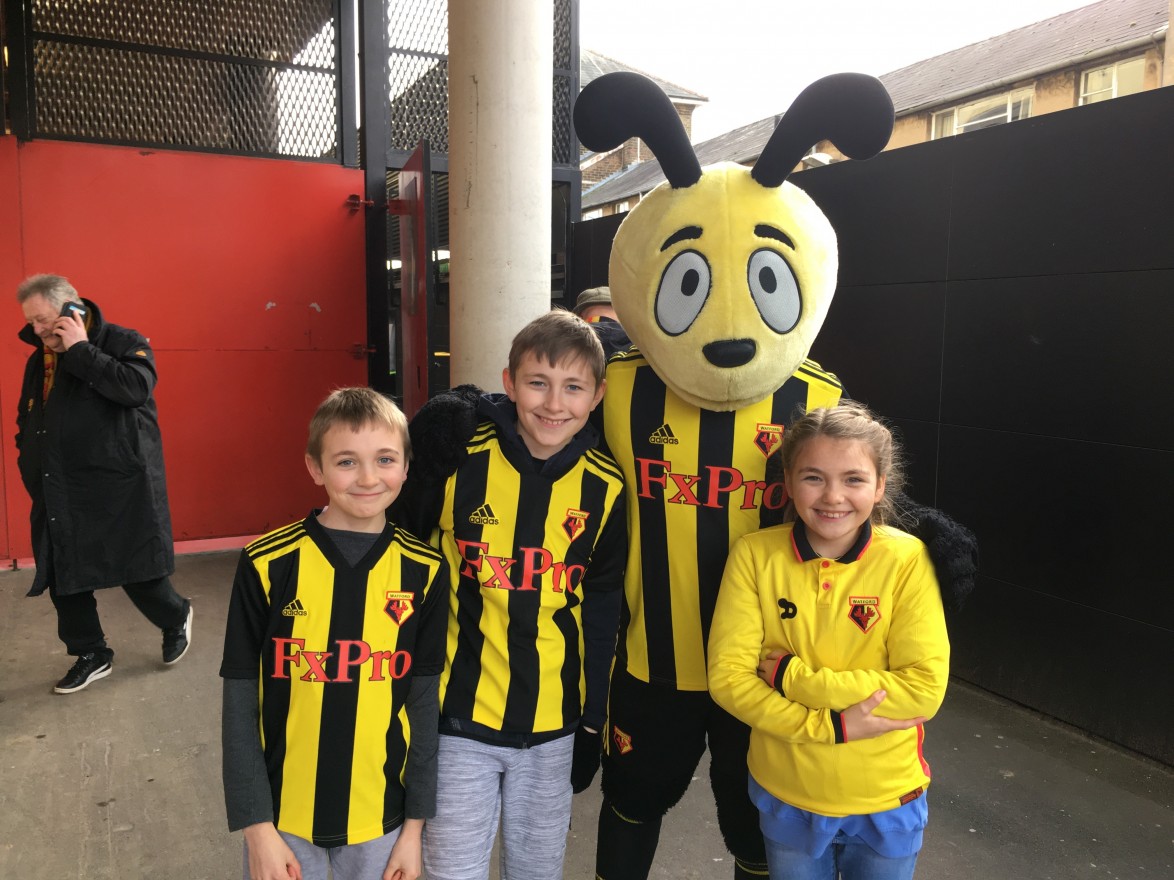 Creating the video was all about “giving people a smile and keeping morale up” according to Ben, but since it’s taken off the family have spotted another oportunity to help a good cause, and have asked anyone who is able to chip in to a fundraiser for the World Health Organisation. Facebook have pledged to match all donations up to $10m via this link, while those without Facebook can donate here.

“When we started this off, we were just trying to distract people and cheer them up, so we didn’t realise we could make a slightly bigger contribution too,” he said. “Anyone who was able to and wasn’t giving in other places, anyone who felt inspired by the video, we thought it was reasonable to say, ‘If you love this, why not chip in’. We’ve got hundreds of messages from people saying they’ve donated. All charities are under so much pressure so just encouraging people to give is one of the important things.

“The direction of the viral video went global and the fact is that everyone in the world and all these other countries are in need. We’re not going to solve this pandemic as one country, we can heal our local communities and support our local hospitals and so on but the route forward for all of this, the biggest positive that could come out of it, is if countries stop drawing lines between them and start to work together.”

I thought it would be nice if I wore the football shirt to display what I was trying to get across in the lyrics. We’re really big fans of Watford. The kit was my Doucouré top from last season!