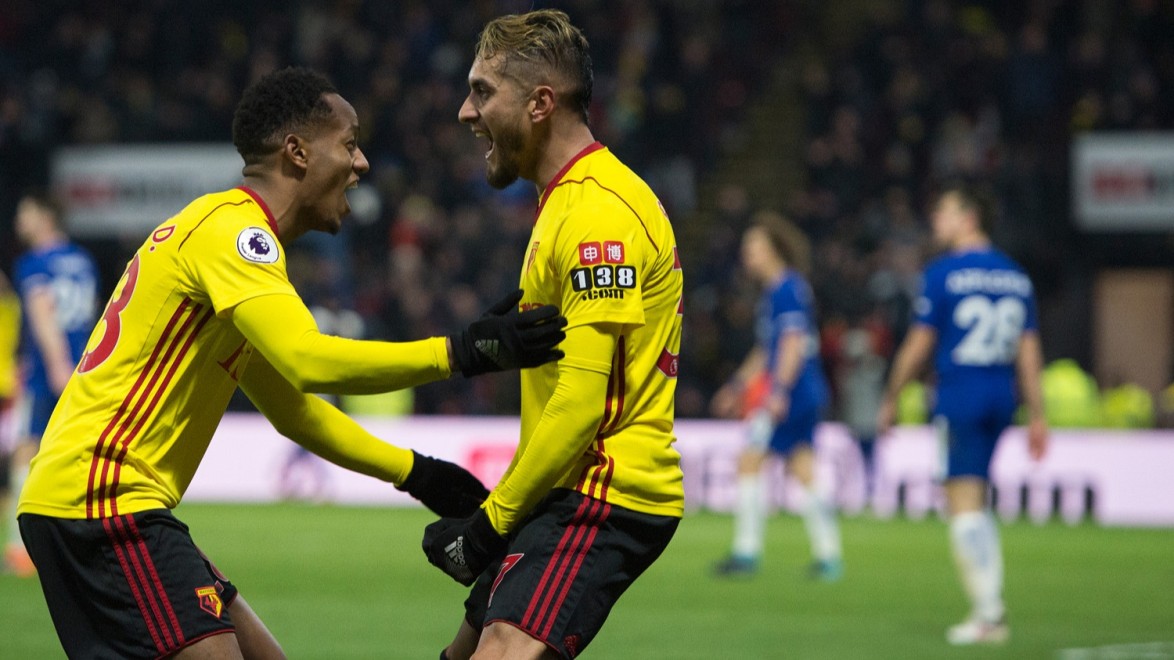 Roberto Pereyra is a master at selling dummies, but it wasn't that long ago he was selling things of a very different kind on street corners just to make ends meet.

The Argentine may now have all the trappings of a top-level footballer — the place in Swiss Cottage, the high-performance car, the diamond earrings, the tattoos, the wardrobe stacked with designer clothes — and so he should too as this is a player of rare gifts, a seductively pleasing talent. But he came from very humble beginnings indeed. His family barely had two pesos to rub together when trying to get by in Tucuman, the overcrowded and bustling province in the north-west of Argentina. There wasn't a lot to go around for him, his two brothers and sister.

“It was very difficult," said Pereyra. “We had nothing. I was selling cans of copper and the occasional fruit so I could buy a sandwich. I was also a gardener, cutting grass. We weren't starving to death but dad could only afford the minimum requirements, so I had to sell things for a bit of extra income.”

The family first lived in a wooden house before upgrading to a concrete structure. Even then they all lived in one room basically the size of a penalty box. His father worked all hours at a lemon factory just to feed some hungry mouths.

“My dad's income was for us to eat,” said Pereyra. “There were no luxuries.” Pereyra quickly learnt to put a high value on possessions. “The odd time we could buy football shoes I would treat them like gold and still play barefoot and only use them on necessary occasions.”

Pereyra is too modest to give details, but one would guess a large chunk of his salary is wired to his family who still live in Tucuman. He's not forgotten his roots and always makes sure two weeks of his summer holiday are spent in his hometown.

“I am very grateful to what football has given me and offered me,” he said. “I want to make the most out of it and share it with people closest to me. Of course, like any family member would do, we all help each other. If they need anything, I help them. I literally came from nothing to riches. I can now walk around and touch the sky with my hands.”

It is why Pereyra was able to retain a sense of perspective when he was struck down by a serious knee injury in December 2016. It halted his Watford career just as it was threatening to take off.

“It was a very tough period mentally,” he said. “It hurts as you just want to get back. They tell you six months and you could feel every day of those six months. It does take you down mentally, but with dedication, strength, will power and support from family members and good friends you get to the end of the tunnel. You manage to get through it. I am thankful to everyone who supported me in the tough period.” 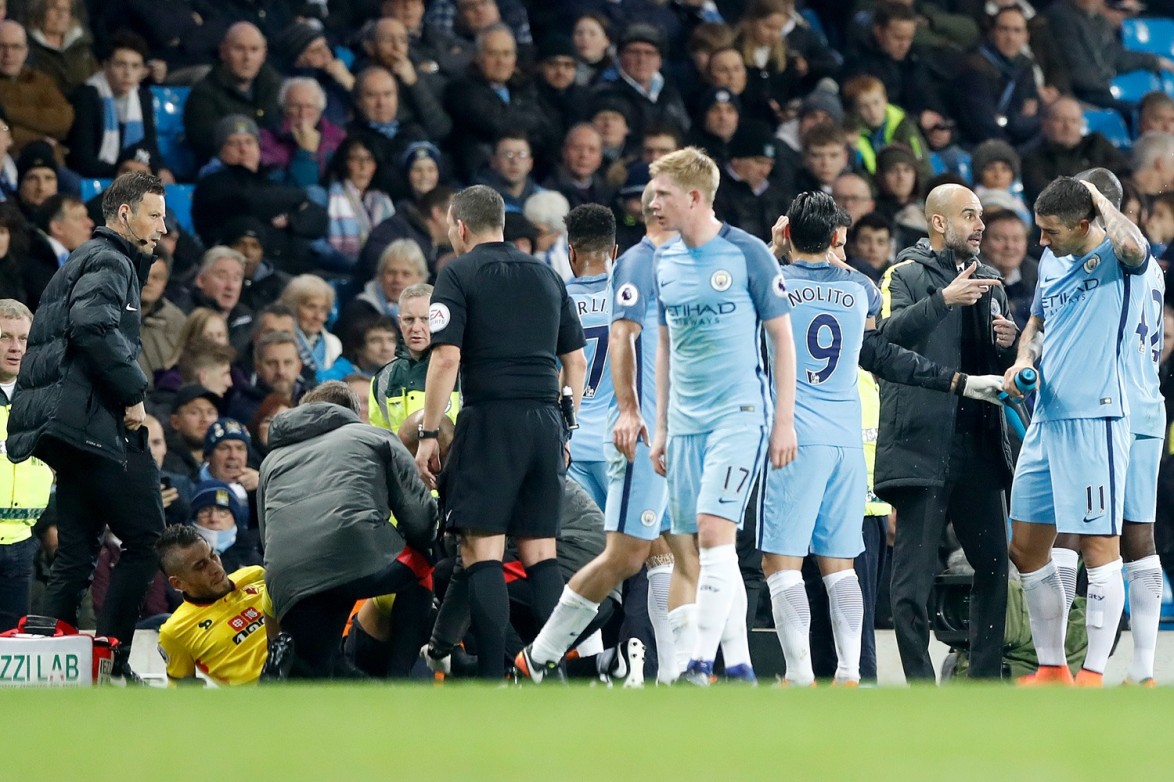 The thing is it all looked so innocuous when he went down at the Etihad in December 2016. He even came back on for a brief period.

“There was no contact — my leg was just stuck on the floor,” he said. “I did feel something and when I came back on the pitch I realised something was wrong. I thought I would be out for less time and I didn't expect it to take this long. There were a few setbacks as well so it took longer than I expected.”

The torn meniscus kept him out for eight months all told and there has been a sense the effects have been long-lasting, with Pereyra not quite trusting his body and not as willing to embrace contact as he once was.

“Everyone knows what they have and what their body can do, it's about the strength in the head,” he said. “If I didn't have will power and belief in my body I would be back in Tucuman playing in the streets. You have to have a good mind-set. It's gone now and I'm back. That's in the past now. I don't like to keep thinking about that — I like to look forward and think about the good things to come.”

And there should be plenty of those on the horizon. Pereyra is 27, doesn't have many miles on the clock and his best years should be ahead of him. He's a Rolls Royce of a player, a beautifully balanced and balletic footballer who interestingly looks better against better opposition. He played so well at Anfield that he wouldn't have looked out of place in the Liverpool side, his goal against Chelsea at Vicarage Road was of the highest class while his performance for an hour at Stamford Bridge, full of sinuous running, elusive movement and kaleidoscopic passing, was up there with anything seen in a Watford shirt in recent memory.

“That was one of my best performances post injury,” Pereyra said. “That was the sort of performance I know I can do and I hope to do that more consistently. I can give a lot more. The injury put me behind for a year. I had to recover physically and mentally from that. The more I play, the more I play with confidence. Every game I feel more physically ready. I have more to offer.” 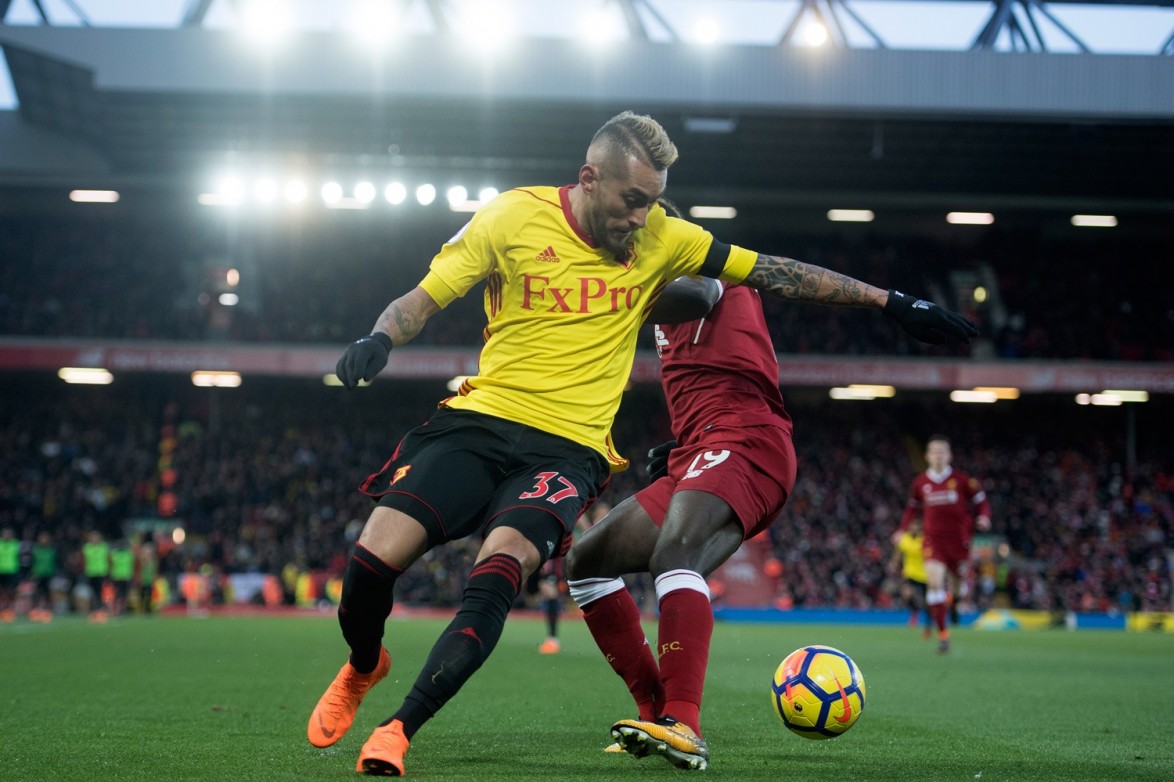 He's shown he has the durability to put together a body work of work. He played 52 times – the joint most along with Claudio Marchisio and Leonardo Bonucci — for Juventus during that high watermark season in 2014/15 when Juve won the league and cup double and reached the final of the Champions League. Pereyra played in the semi-final win over Real Madrid and the final against Barcelona. Massimiliano Allegri clearly had great faith in him.

Pereyra will be able to look back in years to come and say he shared those moments with a list of who's-who of European football – it was some side. There was Paul Pogba, Patrice Evra, Gianluigi Buffon, Carlos Tevez, Alvaro Morata and Arturo Vidal for starters, but two players were head and shoulders above the rest.

“Character wise, Giorgio Chiellini stands out,” said Pereyra. “Mentally, he's so strong and is a leading character. He always looks forward — never back. Technically, you had Andrea Pirlo, Tevez and Pogba but I always say Pirlo. He was on another level.”

It says something about the persuasive powers of Watford's executive team that they were able to convince Pereyra to trade life in Turin playing alongside all those luminaries for a completely new one in south west Hertfordshire. While Cristian Battocchio gave the club a glowing reference when Pereyra called him for a background check, the Hornets had an ace up their sleeve in owner Gino Pozzo who had first plucked Pereyra from Argentina on the strength of his performances at the 2011 Under-20 World Cup and got him to Udinese. They had history. 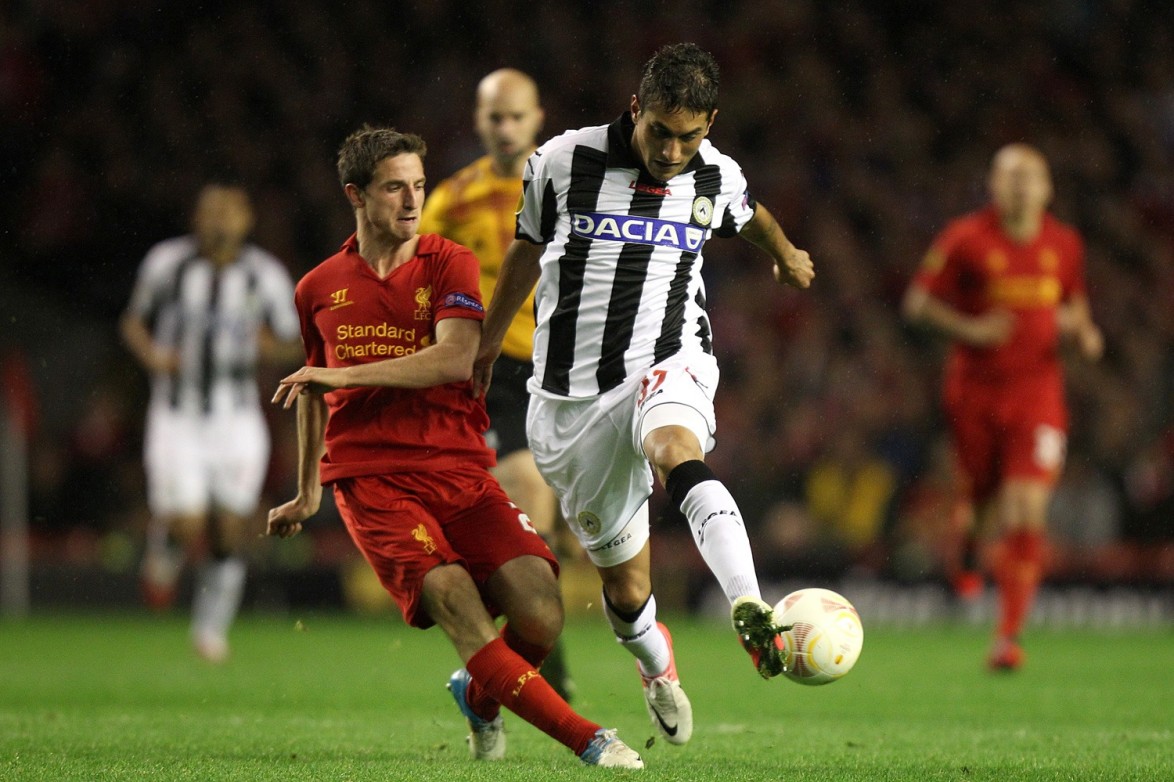 “Gino was the determining factor,” said Pereyra. “I obviously knew him from the past at Udinese and knowing how he works. I know he believed in me and that I could trust him. Having Gino was one of my main factors. It was a very hard choice because Juventus were winning many things. We are talking about one of the greatest clubs in the world. Yes, this is the Premier League but Juventus, well, are Juventus. At the beginning, it was complicated – it was another country, there was this whole settling in. It was quite overwhelming. But I always thought about coming to the Premier League and it was the best choice for my future, for my career. Once I settled down, everything came into place.”

Pereyra is now fully integrated into London life and spends a lot of time with Érik Lamela and Manuel Lanzini, drinking Mate (a traditional Argentinian drink) and playing cards. He exchanges messages with Pogba.

“It's been a while since I spoke to him but we had a great connection. It's always great when we talk and we get along very well.” 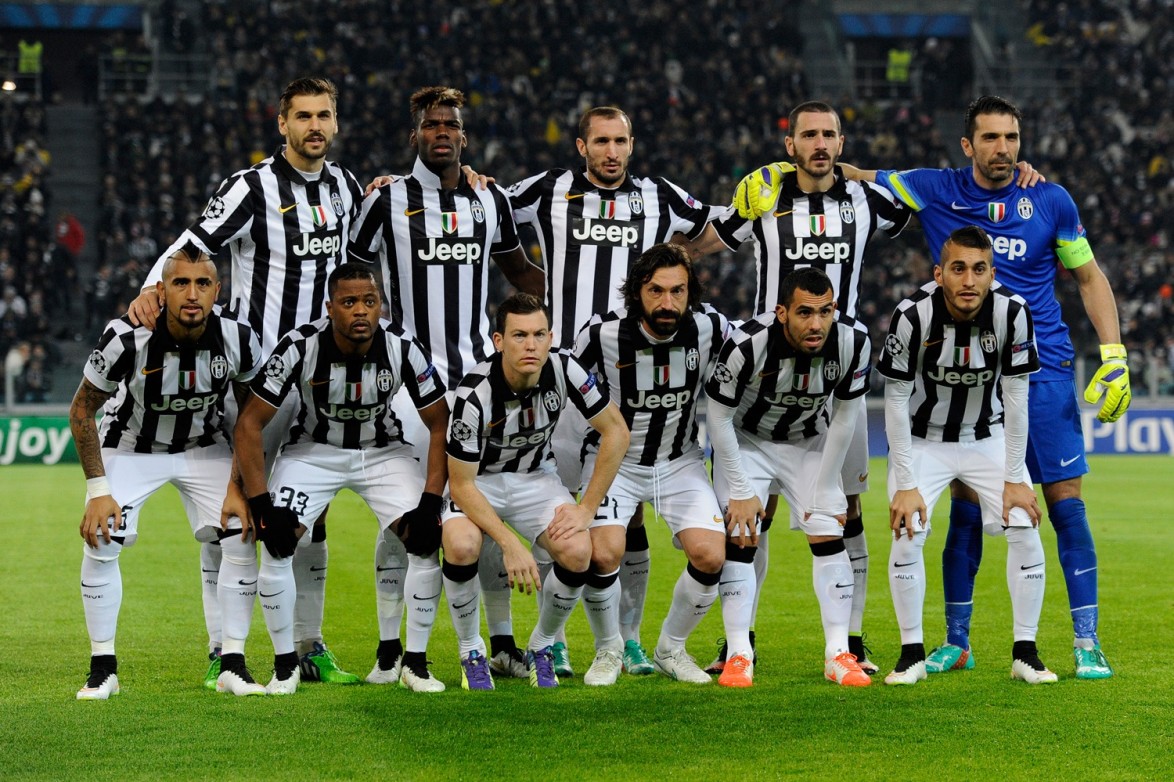 While Étienne Capoue likes nothing better than to watch NBA and Sebastian Prödl can be found visiting galleries and museums in London, Pereyra takes his work home with him.

“I just constantly watch football, mainly England, Spain, Italy and Argentina,” he said. “If I'm at home and there is a Dutch game on I will watch that.”

He will also watch footage of his idol Ariel Ortega, the Argentine schemer who he played with at River Plate.

“It is amazing to play with your idol. I grew up looking at him and then you are sitting next to him and learning a lot from him. He had an incredible influence on my career.”

Pereyra can also tell his young son when he's older that he had the thrill of playing with Lionel Messi, arguably the greatest of them all.

“There are no words to describe him,” says Pereyra. “No-one can understand what goes through his head and what he does. It is just beautiful watching him train let alone playing with him. Unless you are there you just can't describe it. He leaves me speechless.”

“Representing the national team is a unique feeling,” he said. “There is a sensation of feeling of pride, happiness, amazing just being there next to some incredible players. It was the pinnacle for me. It's one of my personal objectives to play again. I will put dedication in game in and game out and hopefully it will happen. If not for the World Cup, then maybe the next year. My aim is to go back and represent the national team again.”

And to do that, he'll have to be pulling up trees for the Golden Boys. What a prospect that is.