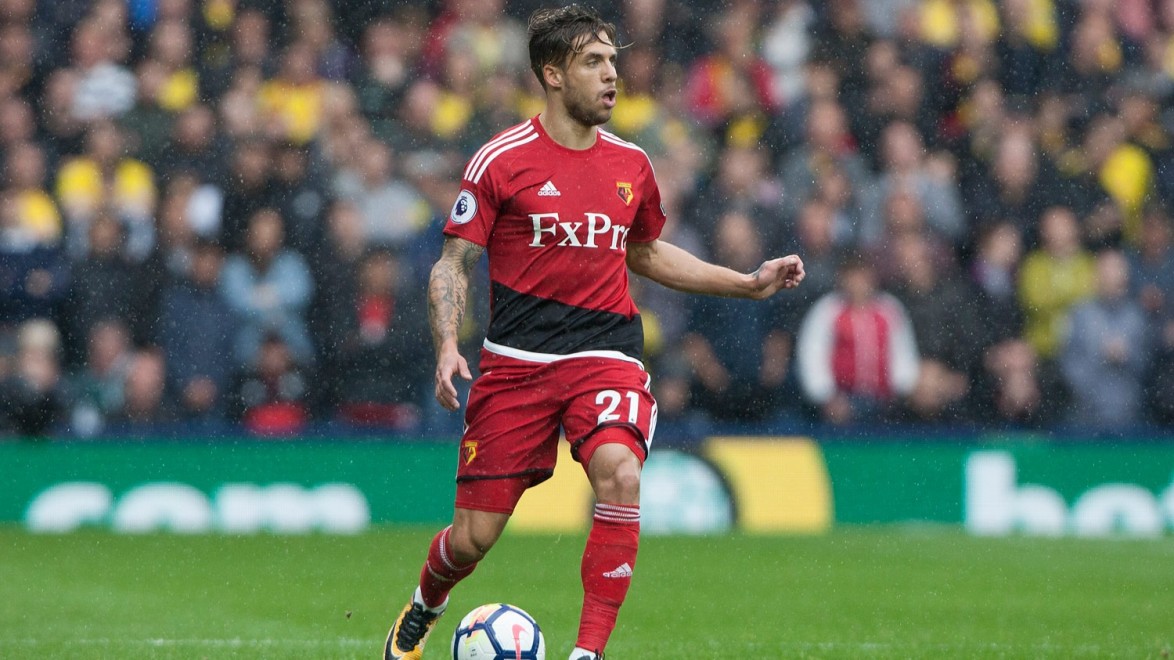 Many are motifs of his commitment to his religion, like the large one of the Virgin Mary on his inner right arm.

Others are more personal. He has his initials and those of his two sisters inked onto a small crown on his upper left arm. Nice touch. There is a red rose on his left hand together with the initial of his partner, Eleanor. The date they met is inscribed on his chest. Sweet. There is one he regrets though, one rather crude one on his inner right arm that isn’t quite in keeping with the rest of the impressive artwork. It’s not easy to make out.

Nobody in these parts needs reminding exactly who Kiko is. His name is as etched on Marco Silva’s teamsheet as indelibly as it is on his arm, quite some feat when you consider he’s keeping Daryl Janmaat, the club’s record defensive purchase and Dutch international, out of the side.

And it’s even more remarkable when you factor in that Femenía only began his career as a right-back about this time last season. How about that.

"Alavés told me they were not counting on me anymore as a winger,” said Femenía. “They told me you play as a right back or you don’t play with us anymore.”

That’s quite some ultimatum. Perhaps that formed part of his decision to run down his contract with the Spanish club and leave on a free last summer.

Unfazed by the stinging feedback from the coaches at Alavés and with his career at the crossroads, Femenía threw himself into the challenge of learning a new position on the hoof in the unforgiving world of La Liga. The transition, from a Gerard Deulofeu type winger to a Hector Bellerin style full-back, has proved seamless. He looks like he's played there all his life.

“I started to play right-back and they liked the way I played," Femenía says. “I knew already a little bit how to play there. I just had to learn the mechanisms. I’ve learned to close back and how to defend better. Sometimes I go too much forward but I am learning all of the time.”

Imagine how good he'll be as he gets more experience under his belt. Right now he’s more in the David Bardsley school of right-backs than the Nigel Gibbs one.

You wonder if he had reinvented himself earlier in his career, although he is only 26, whether he would have been rejected by Valencia as a kid.

“I went for trials but they didn’t want me,” he recalls. “I was very young and at that moment the coach was not convinced of my potential and he sent me home." He could be one of the ones that got away.” 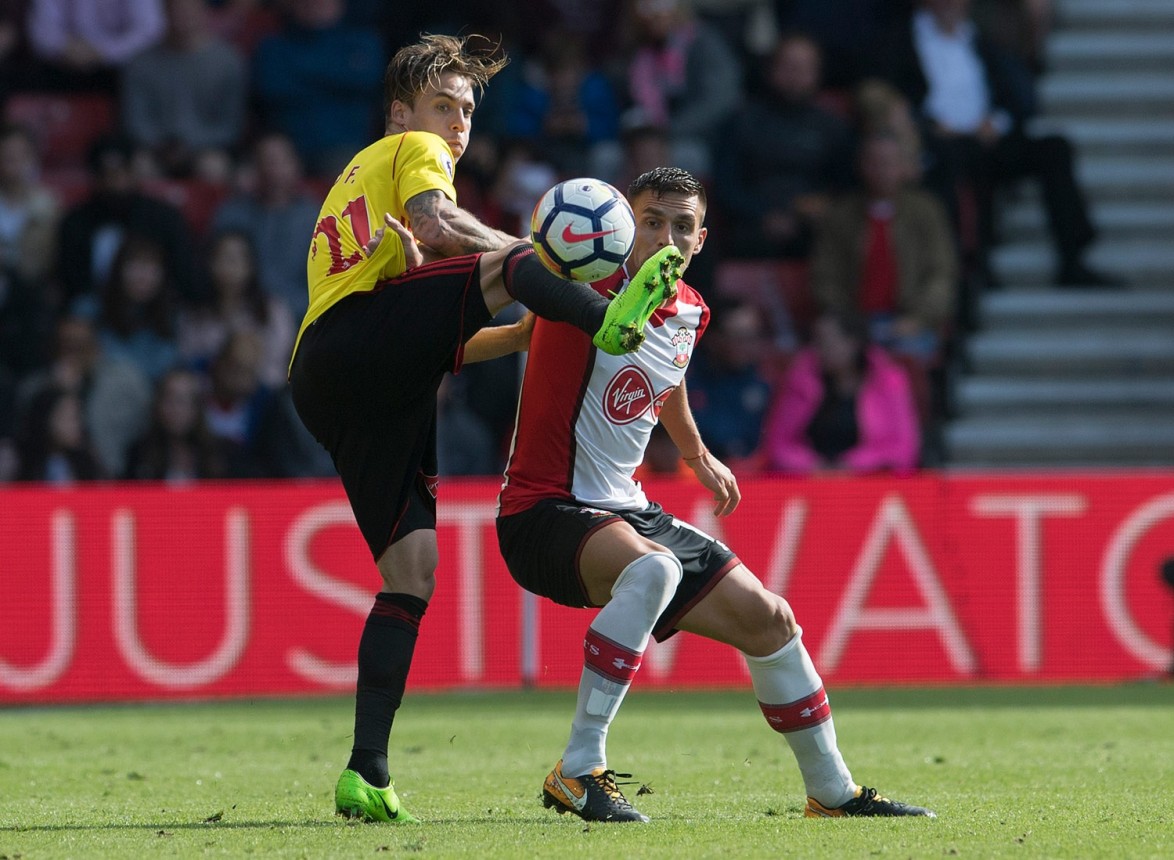 Femenía took the rejection on the chin and resurrected his career at Hercules where he made his debut as a 17-year-old. Then came spells at Barcelona and Real Madrid, albeit their B teams. Life there wasn’t exactly a bed of roses, though.

He rubbed shoulders with the likes of Christian Tello, Sergi Roberto, Rafinha Alcantara and Deulofeu at Barca but while they were clearly being groomed for the first team, Femenía found his path to the bright lights of the Nou Camp blocked. He felt he was heading down a cul-de-sac.

He said, upon leaving Barca after two years, that they “ruined me emotionally.” He’s backtracked on that slightly following the passing of time.

“I said some things that I completely regret. I shouldn’t have ever said they ruined me emotionally. It was because they promised me things that never happened, like playing and training with the first team in the second and third year. They never kept their promises.”

Not many players leave Barcelona and end up at Real Madrid, unless you are Luis Figo but that’s what Femenía did, that's the type of sought-after talent he possesses. But he felt his career stalled there, too, despite playing with, among others, Lucas Vazquez.

“I decided to go there but it was negative as well. The league had already started and the manager already had his preferred players. It didn’t allow me to have any time to play.”

He decided, after just a season and five games, he had to take a step back to go forward and moved to the unheralded Alcorcòn for a season before moving to Alavés. He got them promoted to La Liga and helped them to a famous 2-1 win at Barcelona last season. That must have been sweet given his experience at the Nou Camp. “That was an incredible, unique moment,” said Femenía. He got the shirt of Neymar as a momento.

They sit alongside the ones he collected from playing for Spain Under-18s, 19s and 20s where he was keeping the same company as Thiago Alcantara, Isco, Sergio Canales and Sergi Roberto no less. They've not turned out bad, have they?

“I was always happy when Spain called me to play with them," Femenía says. "It was nice. We are all very good friends. That team had a lot of potential.”

A full cap has, so far, eluded him but they are not easy to come by, particularly with the deep resources Spain possess. He’s not given up hope, though. Being part of a high-riding Watford side in the most watched league in the world will only serve to increase his profile. He’s started well, very well, raiding down the right flank as well as keeping the back door shut. He was excellent at West Brom on Saturday.

“I’m understanding every day more what the manager wants,” he says. “There is a long way to go but every day I learn more from the manager. The Premier League is very different to Spanish football. It’s more direct here and lots of counterattack.”

It’s exactly what he signed up for.

There was, we understand, no shortage of takers for a Spain youth international yet to reach his peak but the persuasive team of Gino Pozzo, Scott Duxbury and Filippo Giraldi did a great job in selling the project at Watford.

“They spoke to my agent and made me feel that they care a lot about me and that they saw a lot of potential in me," Femenía said. "They made me an offer and I decided to come here.”

And how glad he is that he did. You could tell just how happy and content he is by the way he bounded out of the training ground like an excitable kid leaving school following this interview. His mum and girlfriend were waiting in the car. They must be proud at how he’s turned out.