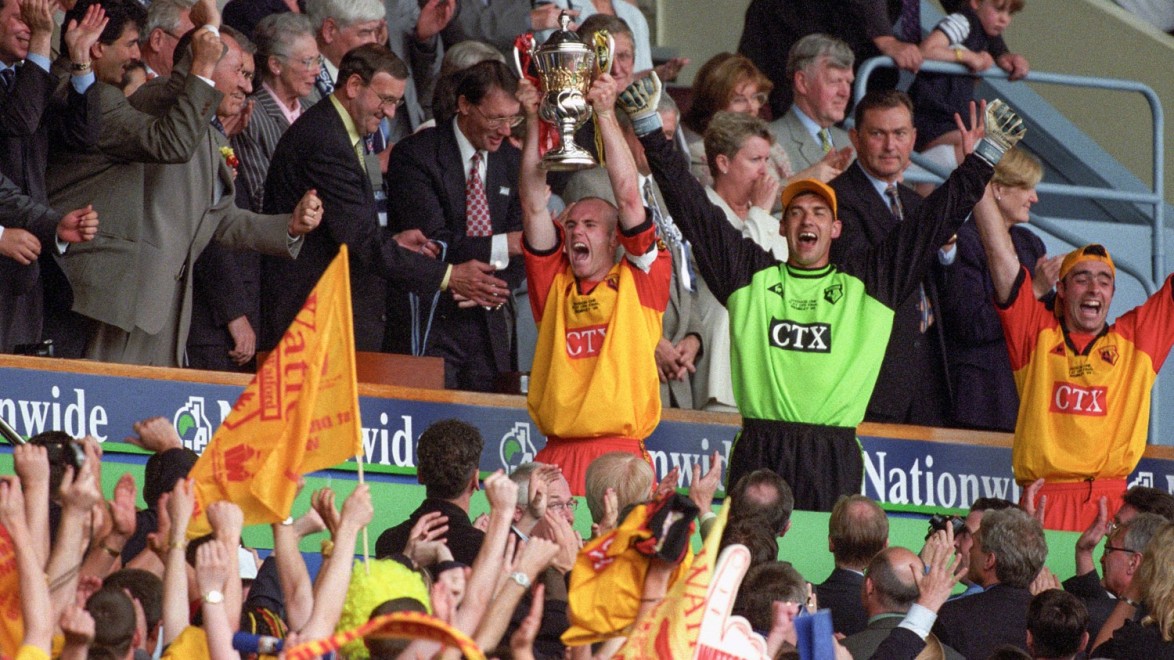 Penalties are tough enough to take as it is. Making that dreaded walk from the centre circle knowing it could be your one that costs your teammates, that your legacy will always be the guy who choked from 12 yards.

Imagine then the pressure on Robert Page, Watford's sixth penalty taker on that high-octane night at St Andrew's in May 1999. He's the leader, he can't miss. If he does, it could be all over as we are now into sudden death. You get few second chances when the stakes are so high.

So, Page strides up to the penalty spot, rolls his foot nervously over the ball, bends down to re-spot it and then, just as he's about to focus and look Kevin Poole in the eye, he spots something amid the kaleidoscopic scene behind the goal.

“There is this Birmingham fan to the left of the goal,” said Page. “He's got his pants pulled down and he's slapping his backside.” 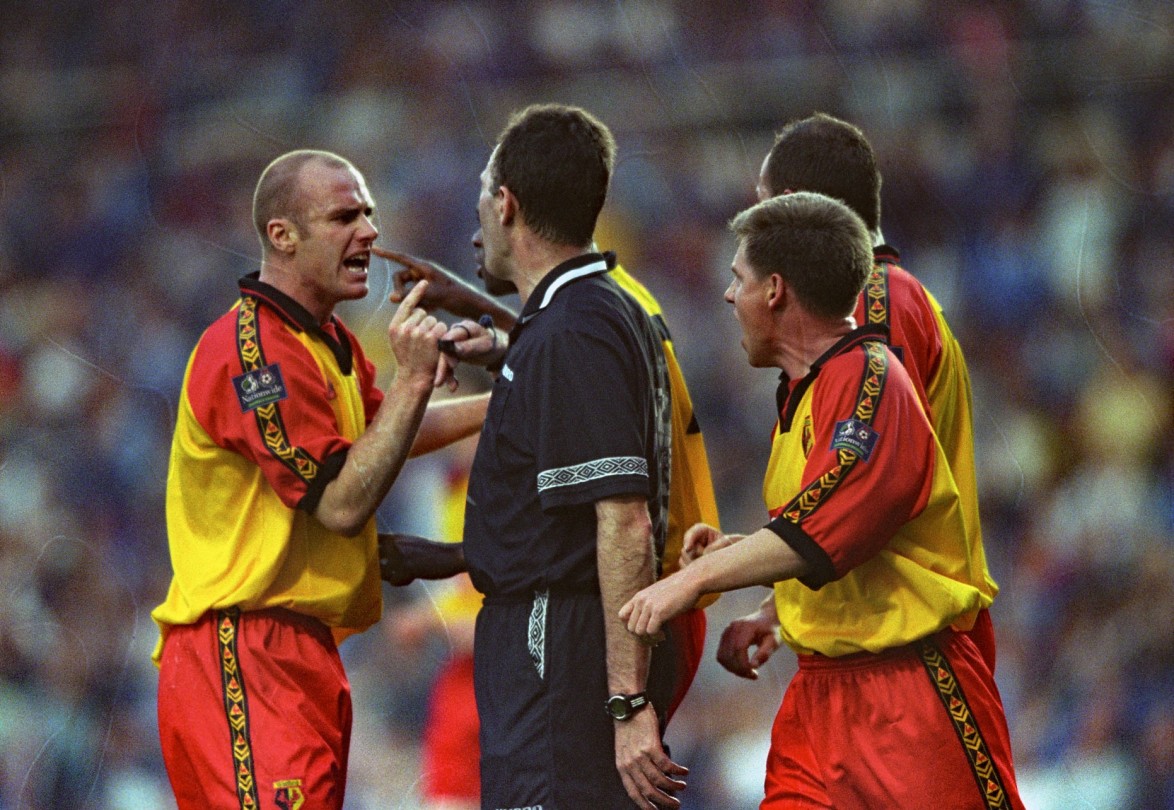 Graham Taylor was a stickler for detail and made the players practise penalties until they were blue in the face once the regular season was over, but not even the great visionary could have replicated a scene like that.

“I just had to refocus,” said Page. “I was never changing my mind. I was always going to smash it down the middle, so I just closed my eyes, hit it as hard as I could and hoped for the best.” 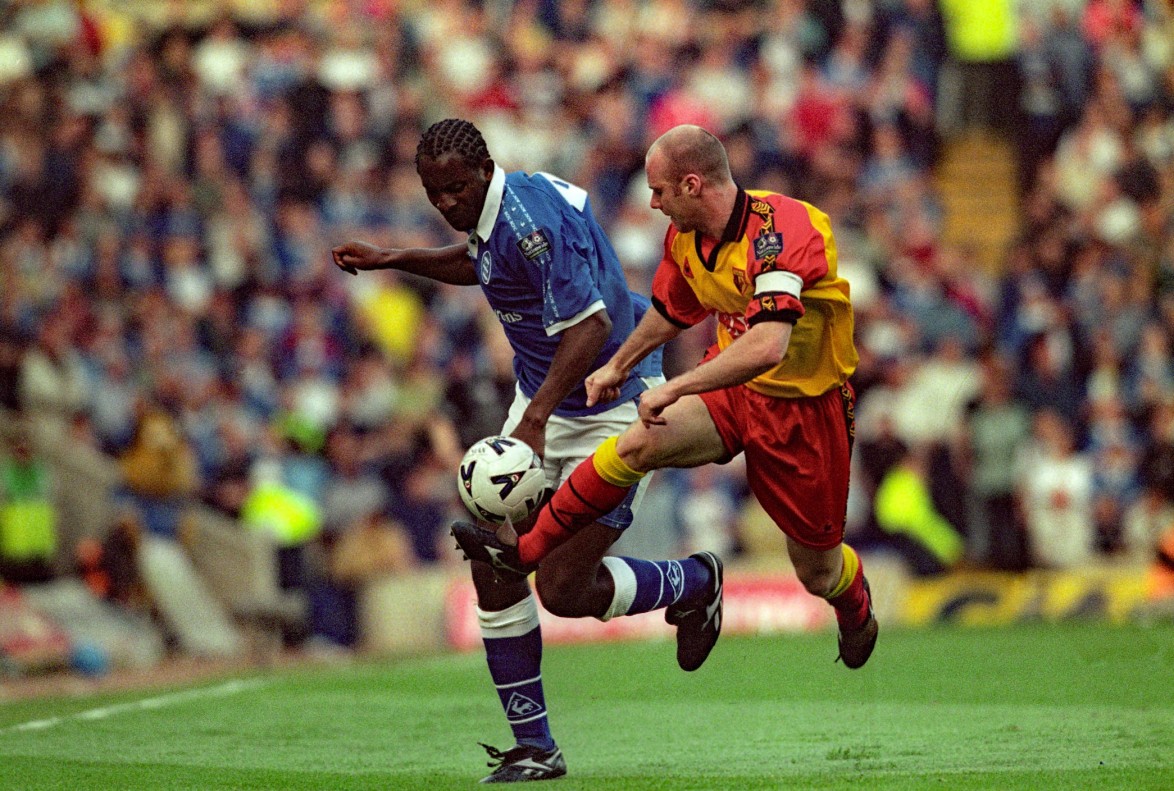 There were a few heart-in-mouth penalties that night, a few that you thought when they were first struck that they were going over the bar and into orbit. Page's was top of the list, but he judged it perfectly, slamming it high into the roof of the net.

Perhaps the firmness with which he struck his penalty was a bit of venting of frustration at not being able to be bed side with his then wife at the birth of their first child. The fact Page played so colossally at the heart of the defence that night, winning the Man of the Match award after repelling wave after wave of Birmingham attacks, was remarkable considering his mind would have been forgiven for being elsewhere.

“My wife was in the QEII Hospital in Welwyn Garden City,” Page said. “She was supposed to be induced that night, but she gave birth the day after. I went straight there after the game and we had Corey the following day. It was a mad couple of days.” 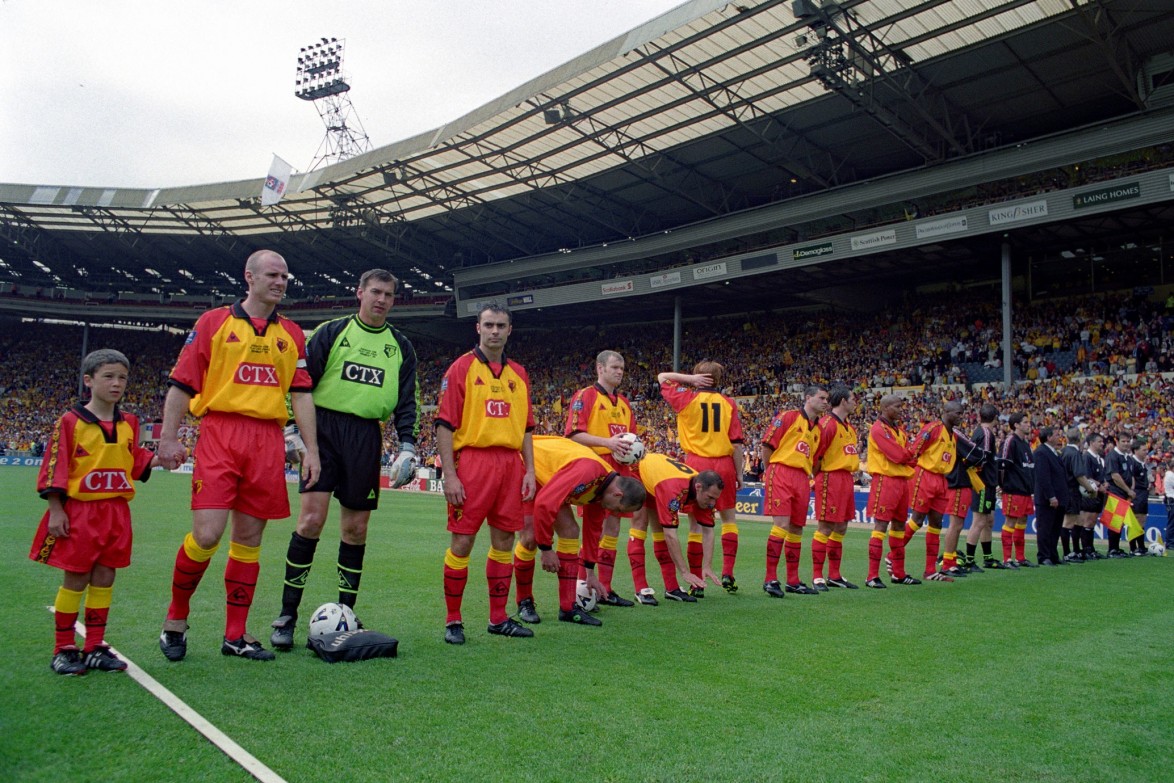 It got even more dreamy 10 days after his son was born as Page led the Hornets, the club he'd been at since the age of 11, out at Wembley. It was Roy of the Rovers stuff.

The belief the players had in the outcome of that unforgettable day at Wembley was totally unwavering. Whether it be the attention to detail with the suits – Bolton wore tracksuits – the emotional rendition of the team song, (Everything I Do) I Do It For You, in the dressing room or the way they kept Bolton waiting in the tunnel and then looked them fearlessly straight in the eye, the Hornets were never doing anything that day except win promotion.

“Absolutely it was our day,” said Page. “We planned for every scenario. We rehearsed penalties, we turned up smart and we even had the training pitch marked out to the exact dimensions of Wembley. There was a great feeling in the tunnel and a great camaraderie, standing shoulder to shoulder. And then Eidur Gudjohnsen missed that early chance and you thought, ‘This is our day’.”

When Allan Smart rammed in the second goal on 89 minutes, the game was up, everybody could start prematurely celebrating and the fans could go through their rendition of songs before the final blast of Terry Heilbron's whistle. It also enabled Page to bank a few mental pictures.

“I remember they had a shot late on and it went way over the bar,” he said. “I asked the ref how long left and he said, ‘That's it’. I remember standing on the 18-yard box while Chambo was getting ready to take the goal-kick knowing before nearly everyone else in the stadium that that was it, he was going to blow his whistle. It was the best feeling ever.” 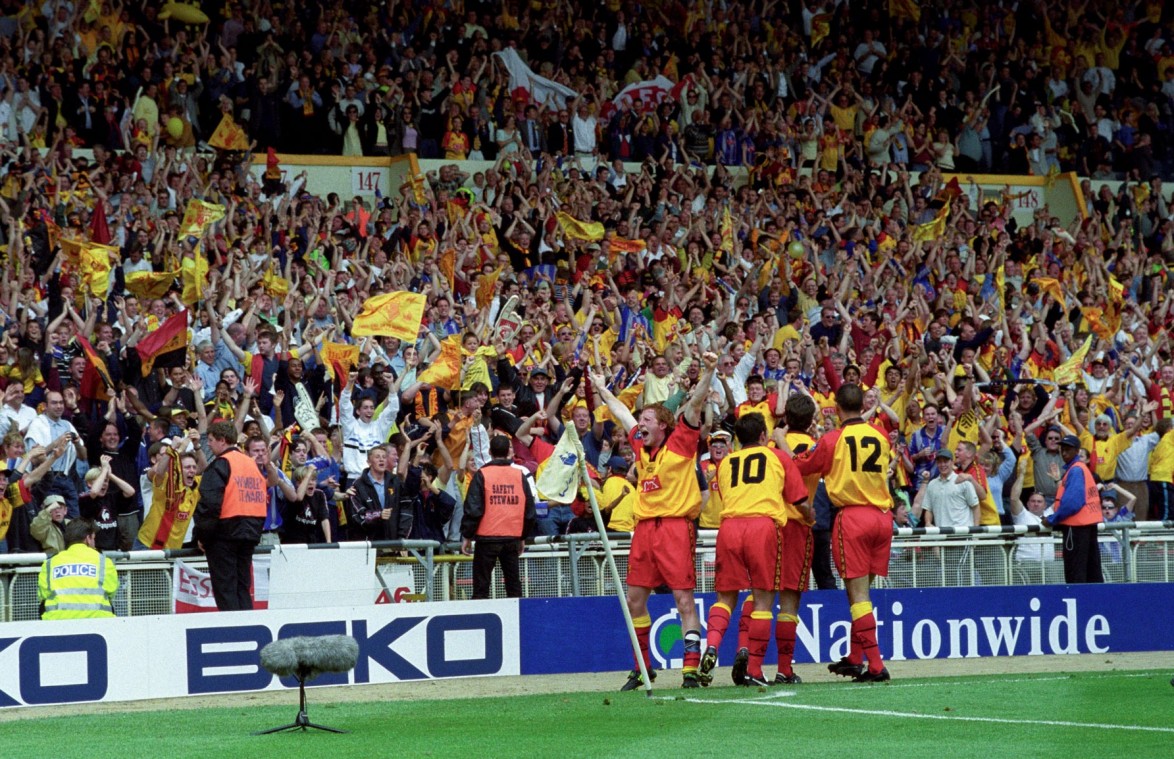 It was the culmination of a remarkable season, full of twists and turns, ups and downs. There were 4-1 defeats at Sunderland and West Bromwich Albion, a miserable run of one win in eight, but then there was that thrilling victory against Tranmere with nine men, the double over Bolton Wanderers and the toppling of runaway champions Sunderland at Vicarage Road.

It wasn’t all plain sailing for Page, either. He may have finished the season proudly lifting the trophy aloft and playing 44 times, but he was dropped after the 2-0 defeat at Wolves in August and spent the next six games on the bench or out of the squad completely.

“It was a wake-up call,” said Page. “GT wasn't afraid to make changes and although you didn't always agree with them and wanted to play in every game, you accepted it. The big test as a footballer comes when you are not involved, that's when you show your true character. I was the captain and I just wanted us to do well.” 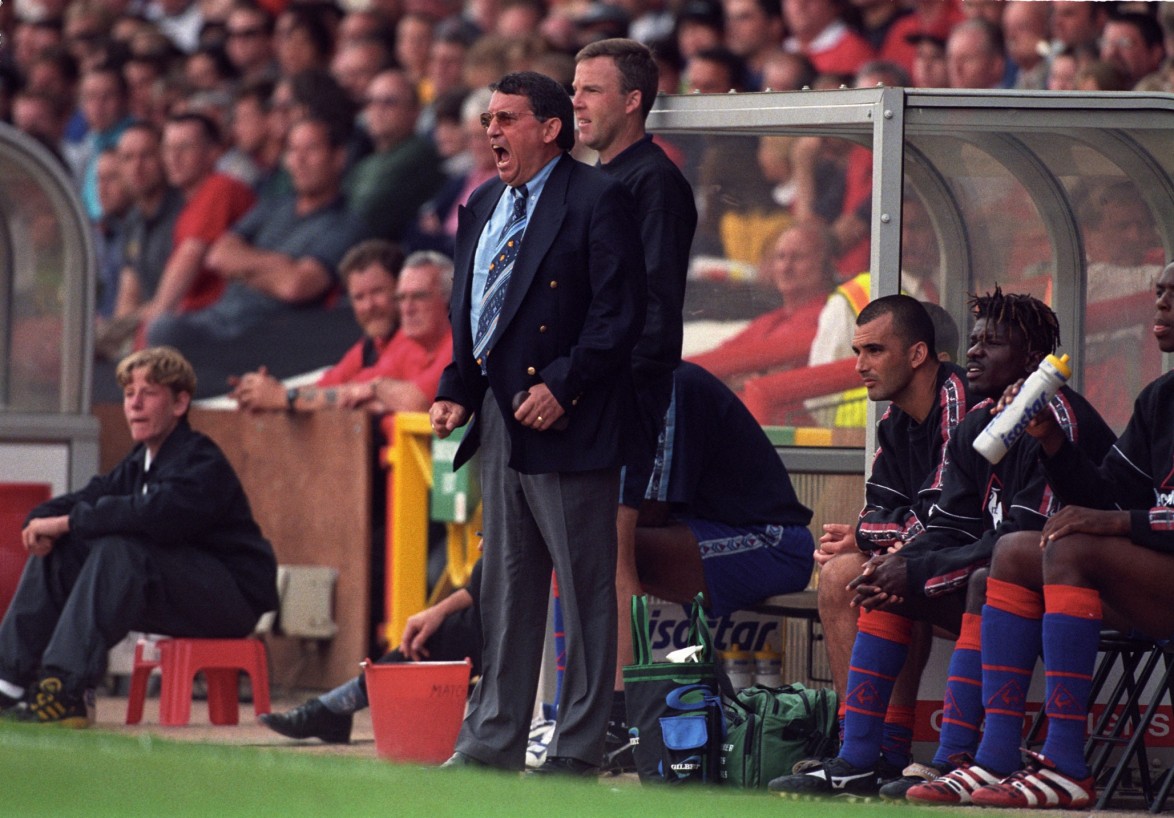 It's a mis-conception that everything GT touched turned to gold that season. For long periods, he was chopping and changing, striving for the right formula. For example, he couldn't find a place in the XI for Tommy Mooney for 22 games and we all know how crucial his purple patch of nine in 13 games turned out to be. It was the same at centre-half. GT tried various combinations of Page, Keith Millen, Dean Yates and Steve Palmer before eventually settling on the partnership of Palmer and Page following a 2-1 win at Bolton in late October.

“Yatesy came in that summer and had loads of experience and we were always wondering who the gaffer was going to pick,” said Page. “You ended up trying to second guess him, but he eventually went for me and Palms. We just clicked really well. We just understood each other. He was quicker than me, very intelligent and read the game, whereas I wanted to go for every header whether I was winning them or not. We complemented each other really well.” 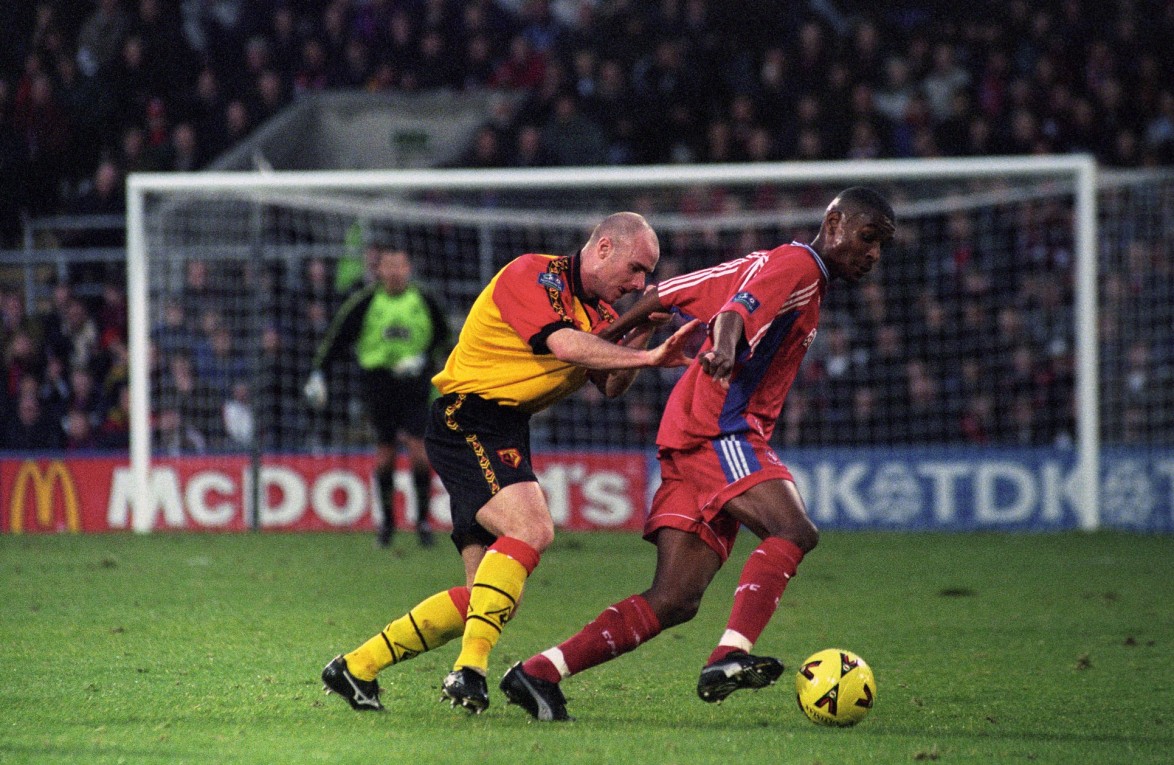 While Palmer could put his feet up, go on holiday and celebrate after events at Wembley, Page had one more assignment at the end of an exhausting season. He was called up by Wales to play against a star-studded Italy side featuring Paolo Maldini, Christian Vieri, Gianluigi Buffon, Filippo Inzaghi and Fabio Cannavaro. This was five days after the momentous, emotionally and physically draining efforts at Wembley, but it says plenty about Page that there was no sign of a phantom calf or hamstring injury that others would have used to pull out.

“I had to leave the promotion party early because I had to meet up with Wales,” said Page. “I could only have a couple of drinks. But I got there and I was still on cloud nine. Mark Hughes was the manager and he and his staff sat me down, congratulated me and asked me all about it. On top of the birth of my son, it was an unbelievable couple of weeks.”