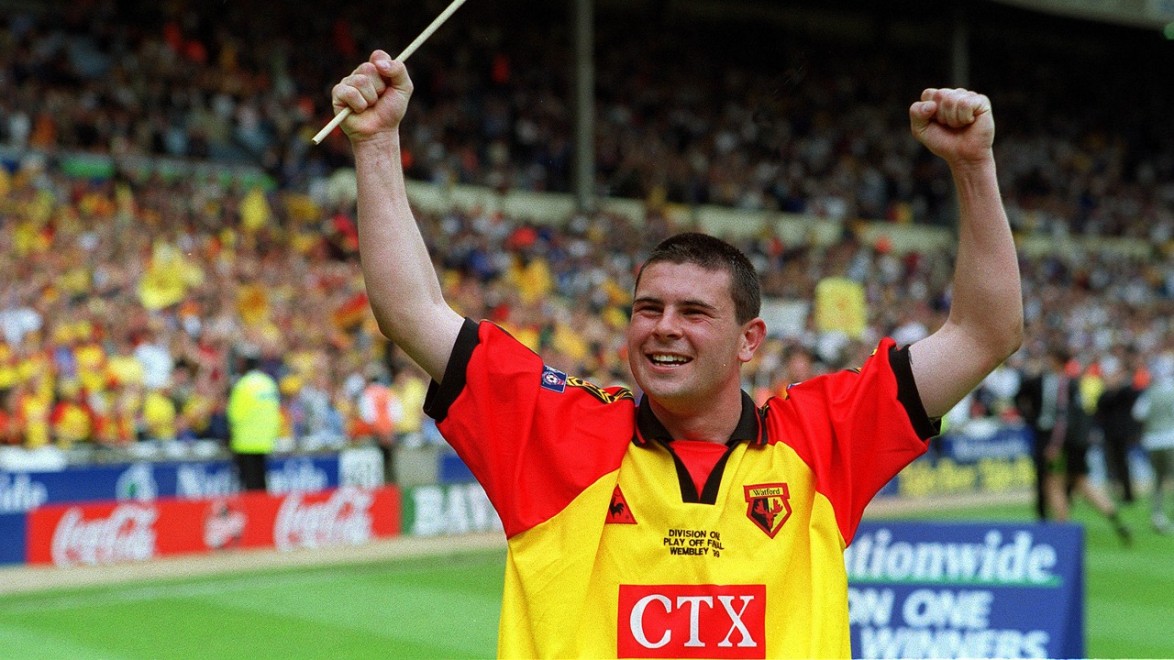 Paul Robinson has been there, done it and got several t-shirts from a mightily impressive career largely spent operating in the top two tiers of English football. He had plenty to reflect on when he hung up his well-worn boots in the summer, but perhaps no season summed up his career better than the memorable 1998/99 campaign.

He went through the full range of emotions. There was the frustration of starting the season injured; the devastation of injuring a fellow professional; the heartbreak of missing out on the then biggest game of the season through suspension; the uncertainty of whether he would be picked for the play-off final at Wembley and then the double joy of promotion and being called up to the England Under-21 squad for the first time. Oh, and he stopped being a teenager and turned 20 that season. He came of age in more ways than one during that heady campaign under the late, great Graham Taylor.

The previous season, he played 25 times in the Second Division title triumph and after a ‘good blow out’ in Ayia Napa with fellow graduates of the youth team, he returned for pre-season as the first-choice left-back, but then he was struck by a rare injury. “I had a slight thigh problem,” he said. “It set me back a couple of weeks and I was devastated to miss the first game.”

He missed the late, late show at Portsmouth where the Hornets scored twice in the last 10 minutes to beat Pompey on their own patch. It kind of set the tone as Watford were to score 11 goals that season between the 81st and 90th minute, more than any other period in the game. 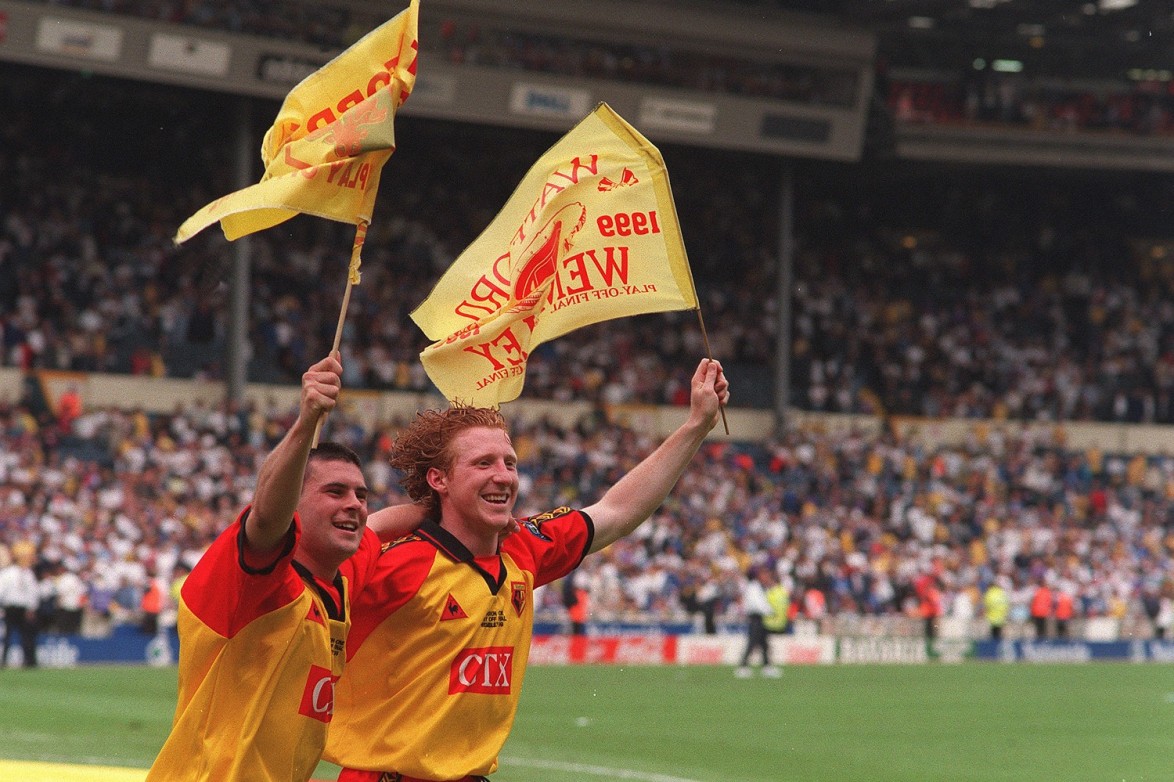 “We had a spirit and we were fit,” said Robinson. “We were always doing running sessions and had sessions where there were no footballs. On a Tuesday we knew it would just be a running day if we didn’t have a midweek game. We used to grind teams down because we were fitter and mentally ready.”

There was Allan Smart’s 85th-minute winner at Queens Park Rangers; Gifton Noel-Williams’ 87th-minute clincher at Bolton and Michel Ngonge’s goal three minutes from time against Tranmere when the Hornets had two men sent off. But it did not all go to plan, though. They lost three successive games in August and September, went five without a win in December and January and five again in February and March.

But this group were made of stern stuff and they also got on an unbeaten streak as quickly as they got on a losing one. They were third midway through the campaign on the back of a 10-match unbeaten run and then finished the season like a train, winning seven of the last eight matches. The spirit in the group was forged as much off the pitch as it was on the pitch.

“We had a great togetherness,” Robinson said. “We would always go out together and everything we did, we did as a group. We’d always go for a beer or we'd go to the races. It was good fun and we had a laugh. We really enjoyed each other’s company. Richard Johnson and Peter Kennedy were the real characters in the dressing room, but they were all great lads, to be honest.”

GT also encouraged the players to get to know each other better by making sure no two away trips were the same. “I roomed with the likes of Tommy Smith, Darren Ward and then Peter Kennedy now and then,” Robinson said. “Graham wanted to mix and match the roommates. He wanted the new players to understand the club, he wanted us to understand the fans and he made sure the players fitted into the group. He was masterful at that and never added players that weren’t right.”

Ngonge, Smart and Nick Wright came in that summer and the squad were quietly confident of building on the title-winning season and doing more than just making up the numbers in Division One. “We knew we could do really well,” said Robinson. "We didn’t go over the top and think, ‘This is the year we are going to get promoted’. We always had a levelness about us. There were some top quality teams and we had to be at it every game.”

GT knew he had a lovely balance down the left-flank with the swashbuckling Robinson playing behind the poised Kennedy. “He was top drawer,” said Robinson. “It was a great learning experience for me to play behind a Northern Ireland international. He was a fantastic talker on the pitch and we had a great understanding. We knew each other’s run inside and out and just had that connection.” 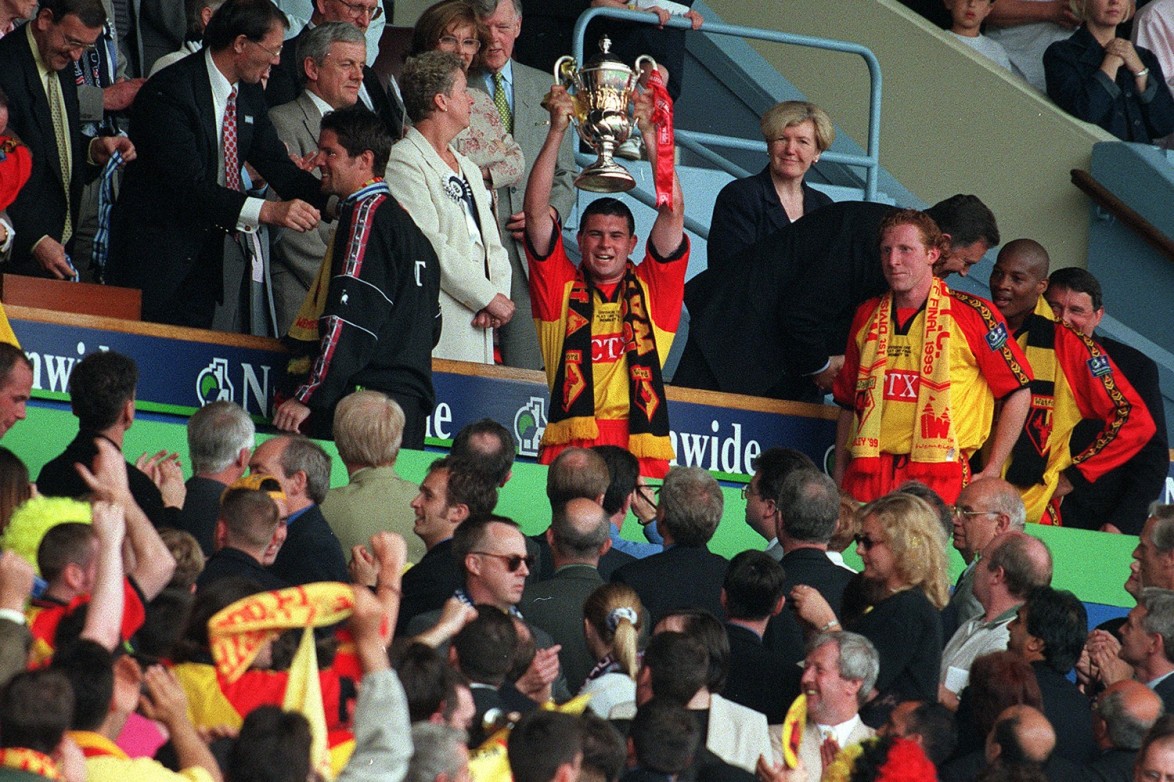 Kennedy was one of the senior figures in the dressing room who had to put a comforting arm around Robinson when he broke the leg of Stuart Talbot in two places in a game at Vale Park in April. “It was a dreadful time,” said Robinson. “I didn’t know what to do, my head was all over the place with how he was feeling and how his family was. You never ever go out onto the pitch to intentionally hurt someone. It was a horrible incident. The club sent flowers on my behalf but, on reflection, I should have got in touch with him myself and spoke to him, but the club wanted to protect me as I was a young lad. I wish now I had gone to see him and spoke to him on the phone.”

It says a lot about Robinson’s mental strength that he carried on playing that season to such a high level. He got himself back in the right frame of mind only to find himself on the floor again three weeks later when he was sent off in the first leg of the play-off semi-final against Birmingham. “It was harsh one,” said Robinson. “I just think the referee get carried away and one of the yellow cards was very harsh. I was devastated because you knew you were missing the biggest game of your career.”

GT called on the redoubtable Nigel Gibbs for the second leg at St. Andrew’s — and Gibbs turned in one of the performances of his career on one of the great nights in the club’s storied history. Robinson sat with the away fans and then spent the next week agonising over whether the manager was going to recall him for the final at Wembley.

“Graham kept his cards close to his chest,” said Robinson. “I never had an idea all week and he left it to the last minute. To be named in the team, a young lad going to Wembley, was something special. Part of me was devastated for Gibbo as he was a top pro and had played so well in the semi-final. I honestly thought he would go with Gibbo as he did such a great job at Birmingham.”

Robinson had to get 20 final tickets for family and friends who then witnessed Wright and Smart floor Bolton with two of the great Wembley goals. “We knew in the tunnel we had the game won,” said Robinson. “We looked in their eyes and they looked beaten before the game had kicked off. We had beaten them twice that season, they knew what type of team we were and couldn’t handle us. The pressure was on them as they were expected to go up with the team and players they had. But we did it and moments like that stay with you forever. It was a great group of players and great memories.”