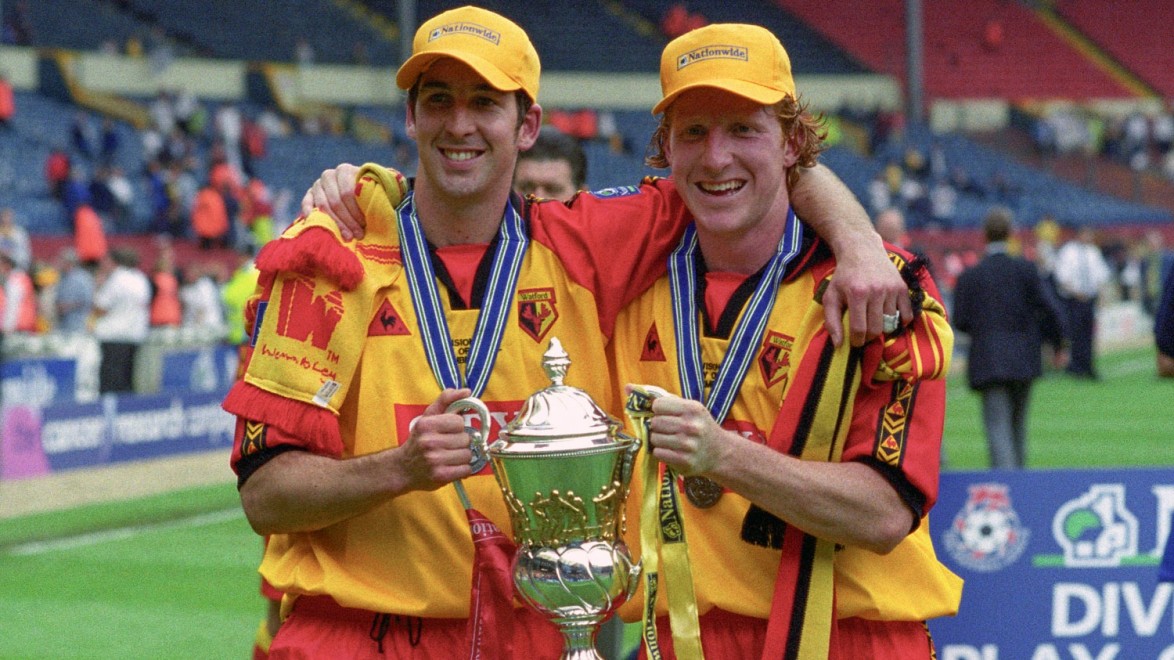 It must have been a right barrel of laughs in the room Allan Smart and Nick Wright shared at the Hilton Hotel in Watford the night before the play-off final against Bolton Wanderers.

Smart has explained how he was fretting over whether he would be named as one of the three substitutes. Wright, meanwhile, has revealed for the first time that he spent the night dosing himself up with painkillers and desperately trying to ensure the staff did not get wind of an injury he was secretly carrying.

“In the training period between the semi and the final we were playing a small-sided game and I went to shoot,” said Wright. “Micah Hyde clipped me from behind and I did an air shot. I felt something a bit weird and I thought ‘Oh Jesus’.

“I said nothing about it and just carried on. I took painkillers, dosed up and iced it. I didn't tell anyone as I didn't want to miss out. If it was going to negatively affect my performance I would have said something as I wouldn't let the team down. I just played on through it and I didn't feel it as I guess that was the adrenaline and the anti-inflammatories. After the final I went and had an X-ray and it turns out I had an avulsion fracture. A piece of bone had come off my pelvis." 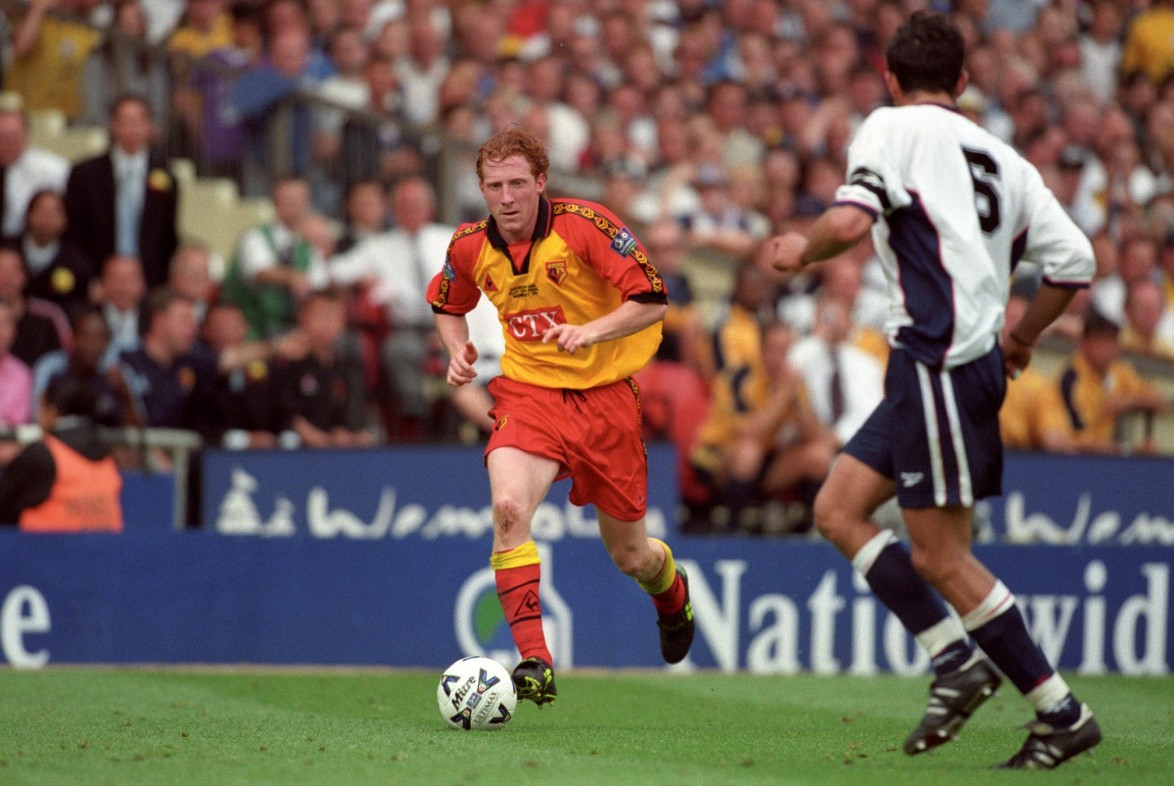 Against that backdrop, Wright's acrobatic overhead kick, seven minutes before half-time, becomes all the more remarkable.

“It was just spontaneous,” said Wright. “Anybody who says they are always doing that in training is a liar. Sometimes it works and sometimes it doesn't. When the ball comes over you have got a fraction of a second to weigh up the options and I chose the right one. I'm pretty pleased I did.” 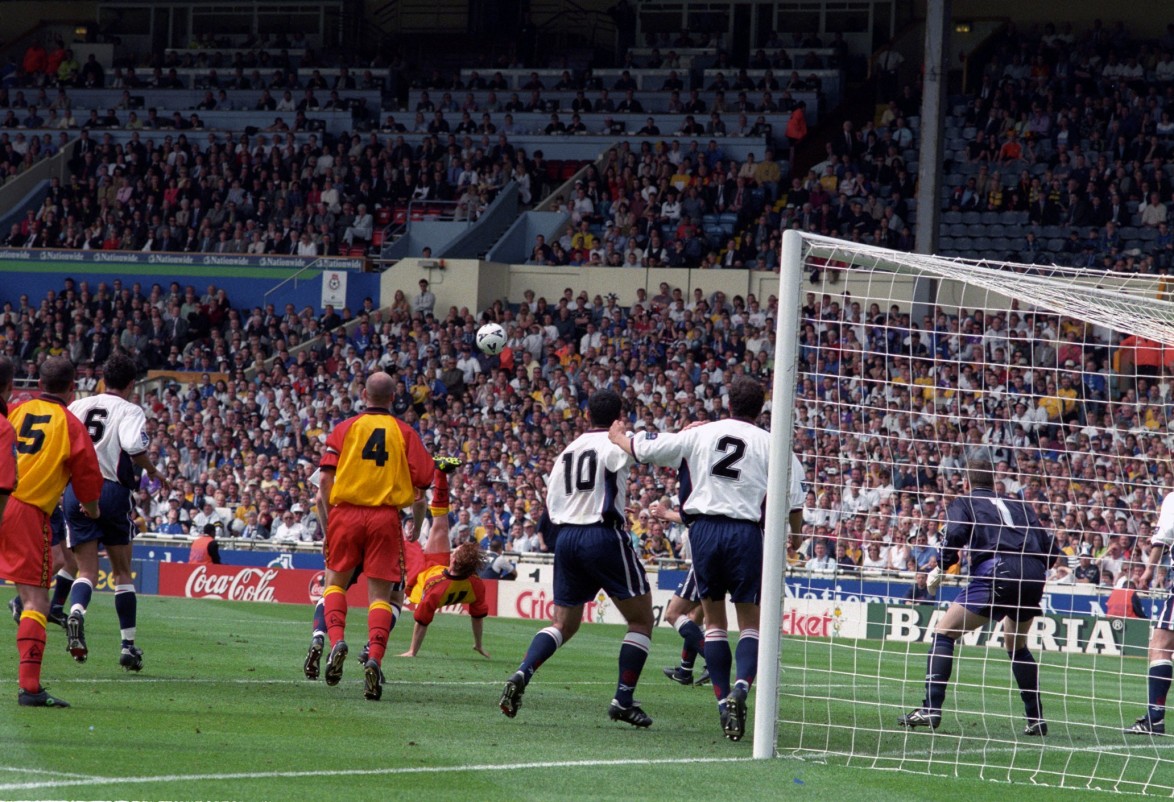 Wright had a penchant for the spectacular that season and probably scored the team's second best goal, too. Away at QPR, on a cold Saturday in February, Wright got his sixth of the campaign after just 16 minutes. Ian Grant, writing for the Blind, Stupid and Desperate site, labelled it ‘a strike of blazing brilliance’.

“That one stood out as they were a decent side,” said Wright. “Alec kicked it long out of his hands, the defender slightly misjudged it and I hit a dipping volley into the far corner past Ludek Miklosko. I'd like to say it was from 30 yards, but it was probably closer to 20.”

Wright's first for the club, against Swindon in mid-September, would not have made any end-of-season showreel, but it will stick in the winger's mind for a different reason.

“I scored a minute before half-time from about three yards out, but then I got dragged at half-time. I was feeling good, I'd just scored my first goal and then the manager subs me. To add insult to injury, all the players who hadn't played were made to do laps around the running track at the end and I had to do it. It was a little bit weird having scored.”

It was GT's way, one guesses, of keeping Wright's feet on the floor, a way of reminding him that he had not cracked it by scoring against Swindon. GT's handling of Wright that season was fascinating as he didn’t involve him in any of the first seven games, not even as a sub, not even in the two-legged League Cup game against Cambridge United.

“The manager was honest when I signed and said if I deserved to be playing then I would be,” Wright said. “I'd had a good pre-season, scored a few and then wasn't picked. So I remembered what he had said to me when I signed and I knocked on the door. It was quite daunting as this was obviously a former England manager, but I felt comfortable doing so and he picked me the next week. It was against Huddersfield, we lost 2-0 and I was rubbish. But he kept me in for the next game against QPR, I was Man of the Match and I stayed in pretty much throughout after that."

Wright scored seven goals that season and the Hornets never lost when he was on the scoresheet. “I'm never entirely happy with my return, but I'm not an out-and-out forward,” Wright said. “It's a good return for a winger, but I always want more. I never put massive pressure on myself to score a certain amount of goals and just as important was making sure I worked hard defensively. Are we winning and am I contributing was far more important than goals.” 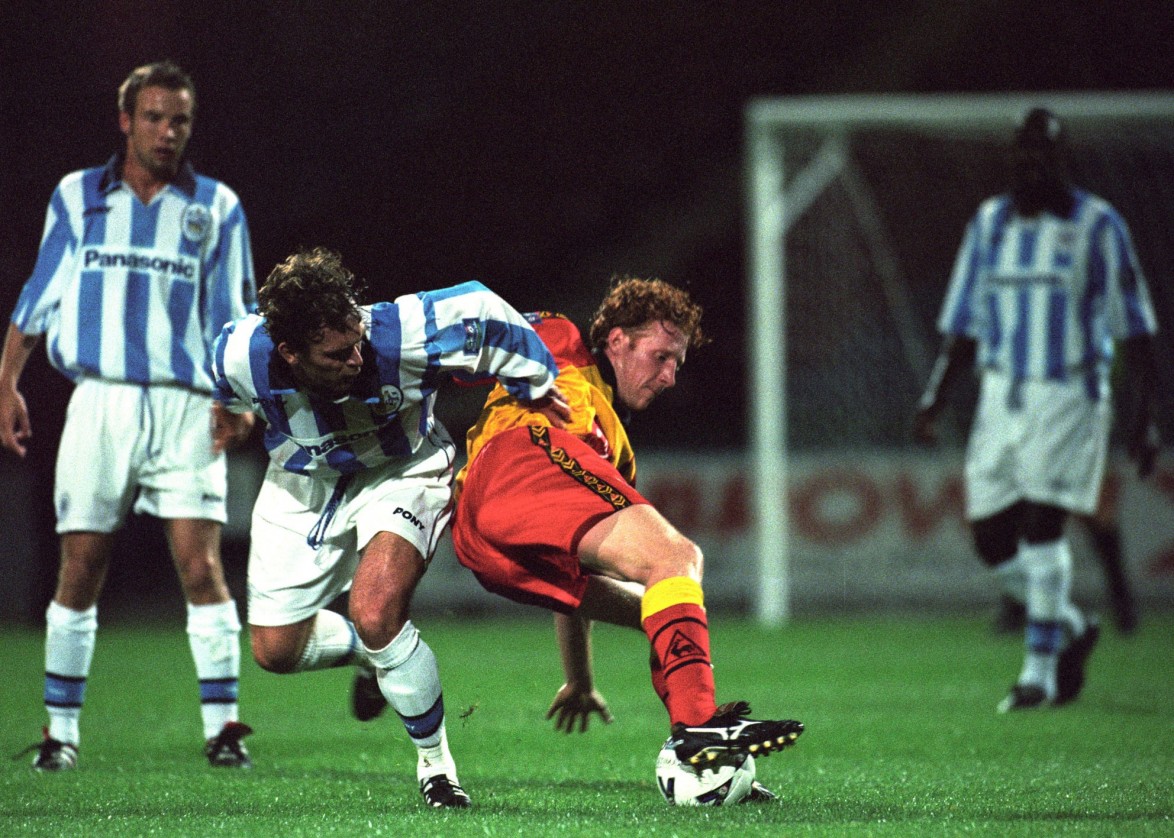 Wright was a lucky omen with the significance of his goals, but he also held another record that season. “I was the most subbed player,” he said. “I spoke with Graham about this and because my game was all-action, I was probably knackered by the time I was taken off. I never wanted to let a defender have a moment's rest and I prided myself on working harder than the opposition. Could I have paced myself? Yeah, easily. Would I have been as effective? Probably not. I wouldn't have had the same edge. I was never happy to be subbed.”

Wright, like most that night, ran his socks off against Birmingham in the second leg of the play-off semi-final and was replaced with three minutes remaining for the eighth match in succession and the 21st time of the season. It did, however, spare him the agony of taking part in the penalty shoot-out.

“I was disappointed as I wanted to contribute, but it was probably harder watching than playing when it went to extra-time and then pens,” he said. “I would have taken the sixth penalty had I stayed on. I'd done quite a lot of practise as GT was meticulous in his approach and I'd put myself forward to take a pen.

“I think it was just the players in the centre circle so I was watching it from the dugout with my hands clasped. We took some very, very good pens and then Alec saved one at the end. I remember sprinting over to celebrate as I was just so excited to play at Wembley. I'd always dreamed about playing in an FA Cup final at Wembley since I was five, so this was going to be a massive experience.” 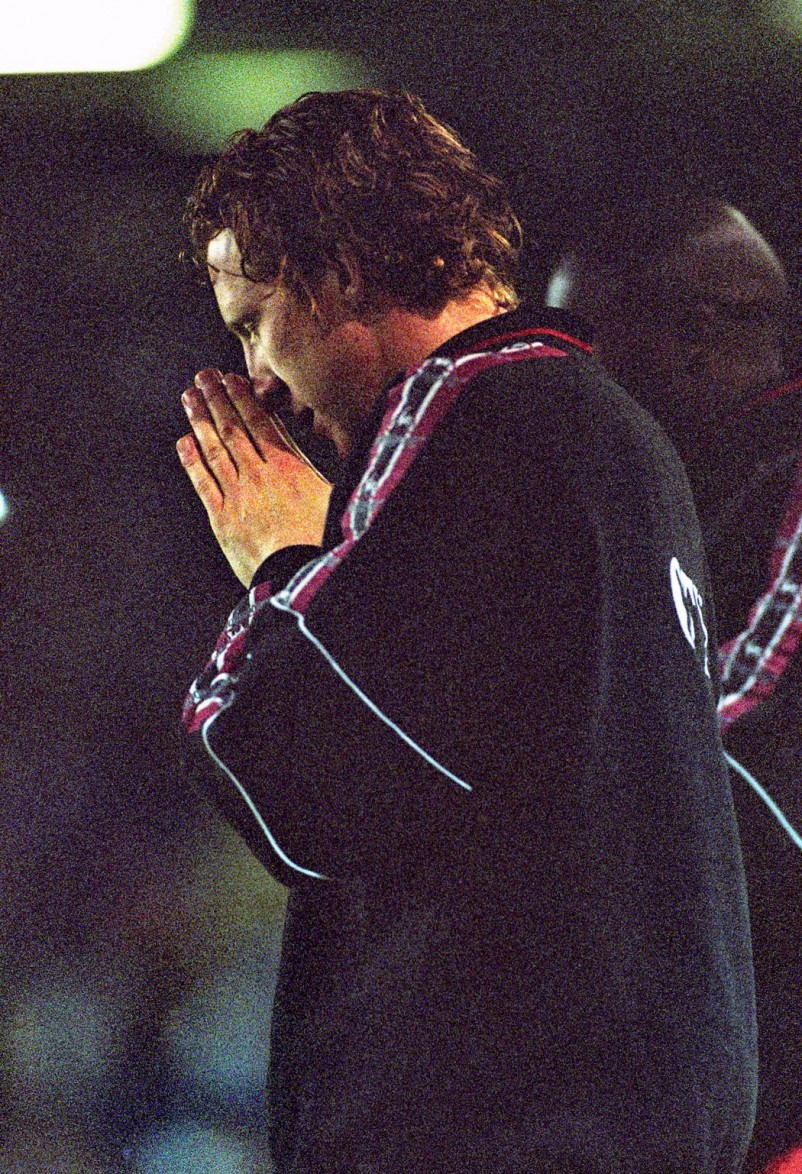 The day was everything Wright hoped it would be and then some. “Singing the national anthem was a big thing for me as I'm very patriotic,” Wright said. “Then obviously going to collect my medal and scoring that goal. It was an incredible occasion for us as a team and for me individually. It was the culmination of loads of hard work.” 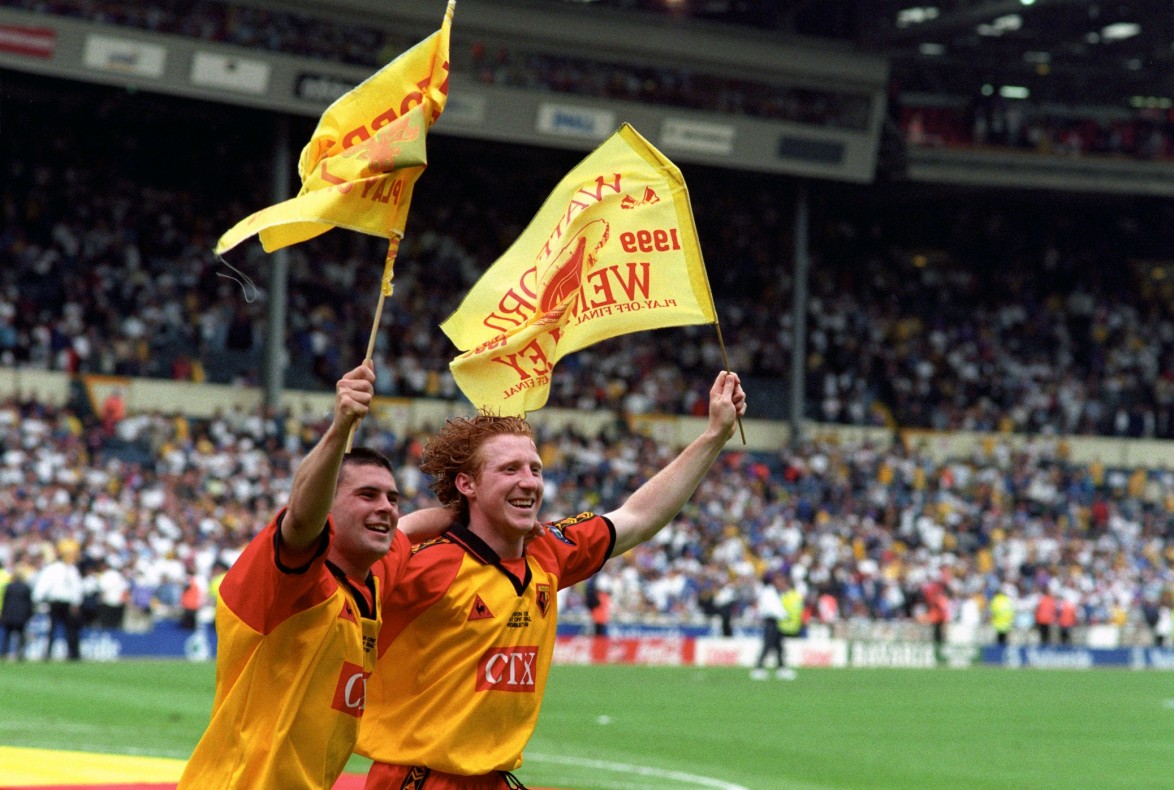 Wright has a framed picture of his goal and the shirt he wore that day, but is still deciding where it should go after moving house in the Midlands a couple of years ago.

Cruelly, Wright only played seven more games after the zenith of Wembley because of a knee injury. Tommy Mooney only played two more seasons for the club, likewise Smart. Darren Bazeley never played for the Golden Boys again, Michel Ngonge was gone the following season and Peter Kennedy and Steve Palmer left a year after that.

“We were always unsure how good that team could be,” said Wright. “And we never got the opportunity because of injuries and so on. We were such a young, hungry, dynamic team and it was brilliant to be a part of. I'd love to see the Opta stats now in terms of ground covered and sprints etc. As a team and individually we would have scored pretty well, I reckon. That collectiveness and team ethic was a big part of our success.”