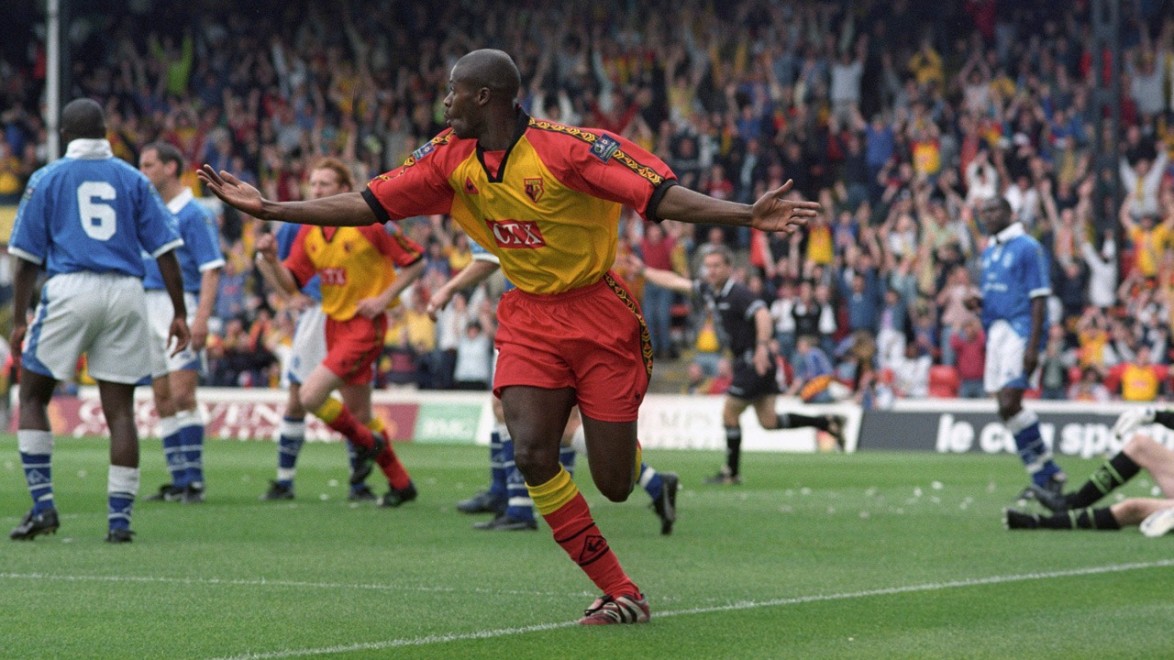 There is a perception that the Golden Boys' charge to promotion was part of some carefully thought-out plan, that Graham Taylor had it all worked out.

Now, GT did ensure the players were ready for a sprint finish by pounding them during a gruelling pre-season. He also put a roadmap on the wall outside the dressing room at the training ground, showing how the final nine games could pan out. He also left no stone unturned when it came to penalties, making the players metronomically practise after every training session following the end to the regular season.

But when it came to selection, he was forever tinkering with his team, trying to come up with a balanced XI that worked. Take the front two, for example. He tried 17 different combinations in attack that season, from Ronnie Rosenthal and Jason Lee on the opening day, to Guy Whittingham and Tommy Smith against Bury and even Allan Smart up on his own.

He eventually plumped for Tommy Mooney and Michel Ngonge, and everyone will remember they were the two players who spearheaded the attack at Wembley, but theirs wasn't a partnership long in the making. They only played together for the first time at the end of April – and even then it was because Whittingham came off injured in the previous game against Crystal Palace.

“Graham Taylor had lots of strikers,” said Ngonge, who was one of seven that season. “We had a big squad and there were lots of options for him, but me and Tommy had a good partnership and we were quite good. It was a nice combination. We were really strong together and we would win the battle with the defenders. The defenders were struggling with us.”

Mooney and Ngonge only started six games together but what six games they were. They beat Port Vale, drew with Barnsley, beat Grimsby to land a play-off spot, saw off Birmingham City over two legs and then wiped the floor with Bolton Wanderers in the final. Ngonge scored five league goals in 25 appearances, 16 of which were starts, that season and Watford were never on the losing end of things when he found the back of the net.

“I didn't realise that,” he said. “When I was in the team, I just wanted to show my teammates exactly what I could do: I can run fast and I can really attack balls from a cross. I should have scored more.” 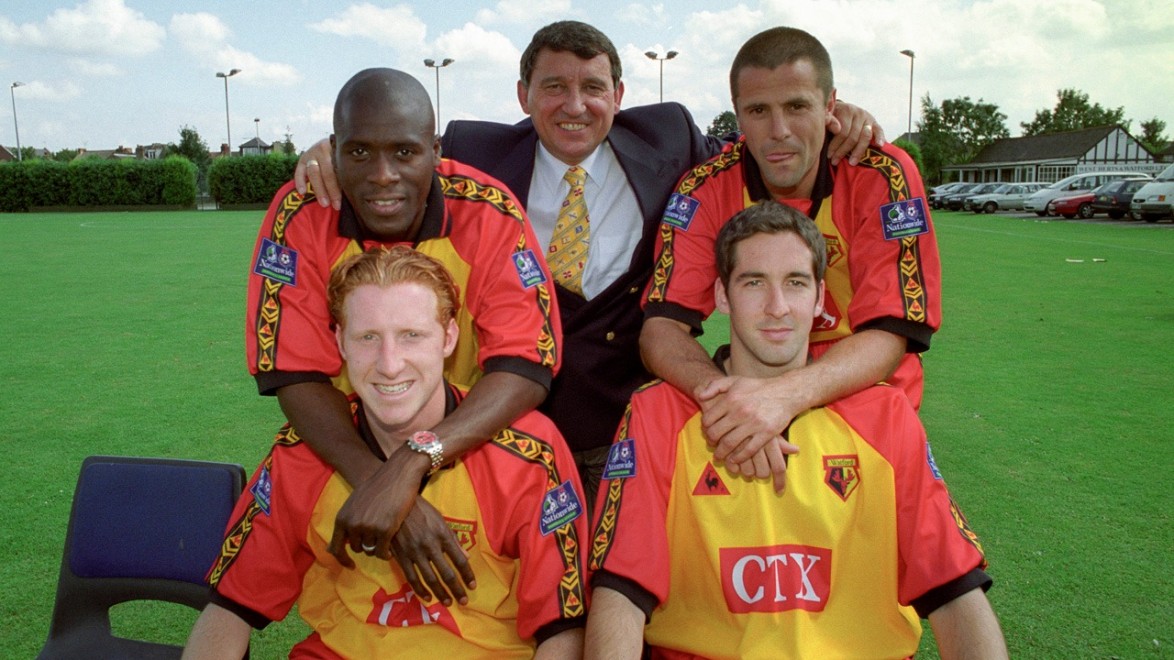 He wanted to score more to repay the faith Taylor had shown in him but groin surgery ruled him out for two months around the turn of the year. GT took a punt on the then 31-year-old that summer, signing the journeyman striker from Samsunspor on the say-so of Rosenthal. GT never saw him play live.

“He knew how to use me,” said Ngonge. “He always told everybody to bring their best to the pitch and the rest will come. He made you go on the pitch feeling big, feeling confident. He made me feel like Maradona. The manager was his title, but he was like your father. He would manage people but he would talk to you from his heart and touch people. He would get the best out of players. I will never ever forget him.

“Even when I asked to leave to join QPR he said, 'Okay, no problem. You have done your job for this club.' I scored for QPR against Watford and I didn't celebrate. He came up to me after the game and said, 'Well done.'”

Ngonge got plenty of pats on the back from GT during the 98/99 season, especially after he got the only goal of the game on his debut in the win against Bradford in the opening home game. He scored in the cup game with Cambridge United, the 3-1 win over Bury, the memorable 2-1 victory at home to Tranmere, the 2-2 draw at Barnsley and then the only goal of the game in the first leg of the play-off semi-final against Birmingham City, heading in a corner from Peter Kennedy. 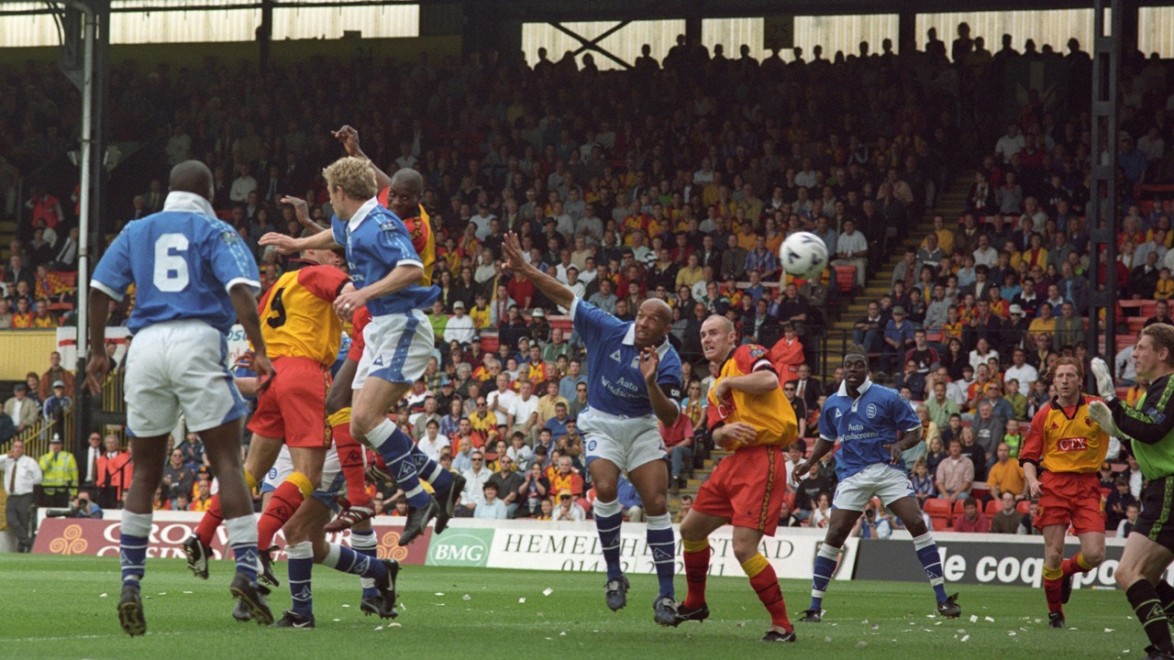 “Graham knew I was the best in the squad with my head,” said Ngonge. “It was something we worked on in training and when it happened, I was like, 'Wow'. It was a beautiful goal and I was really pleased to score such a typical English goal.”

The result left the tie in the balance heading to St Andrew's for the second leg. Dele Adebola scored for Birmingham inside 180 seconds and then it was backs to the wall on a thunderous night in the Midlands. “We were really scared,” said Ngonge. “They scored straight away and they were pushing us so hard. The crowd were really screaming and really aggressive. We managed to hold the pressure and we started to fight. We were not close to scoring, but we were prepared to fight. I was holding the ball up with Tommy Mooney and trying to defend. Alec Chamberlain had an unbelievable match. He made some great, great saves.”

Perhaps the easiest of the saves Chamberlain made was the one to his left to keep out a tame penalty from Chris Holland. Ngonge had been subbed by that point, replaced with three minutes to go of normal time having run his socks off. Would he have had the nerve to take a penalty had he remained on the pitch? “The players will laugh, but I used to take penalties when I was in Belgium and Turkey but nobody trusted me at Watford,” he said. “They never let me take one. Graham already had his shooters and if somebody had hesitated, I would put the ball in the net, don't worry about that.” 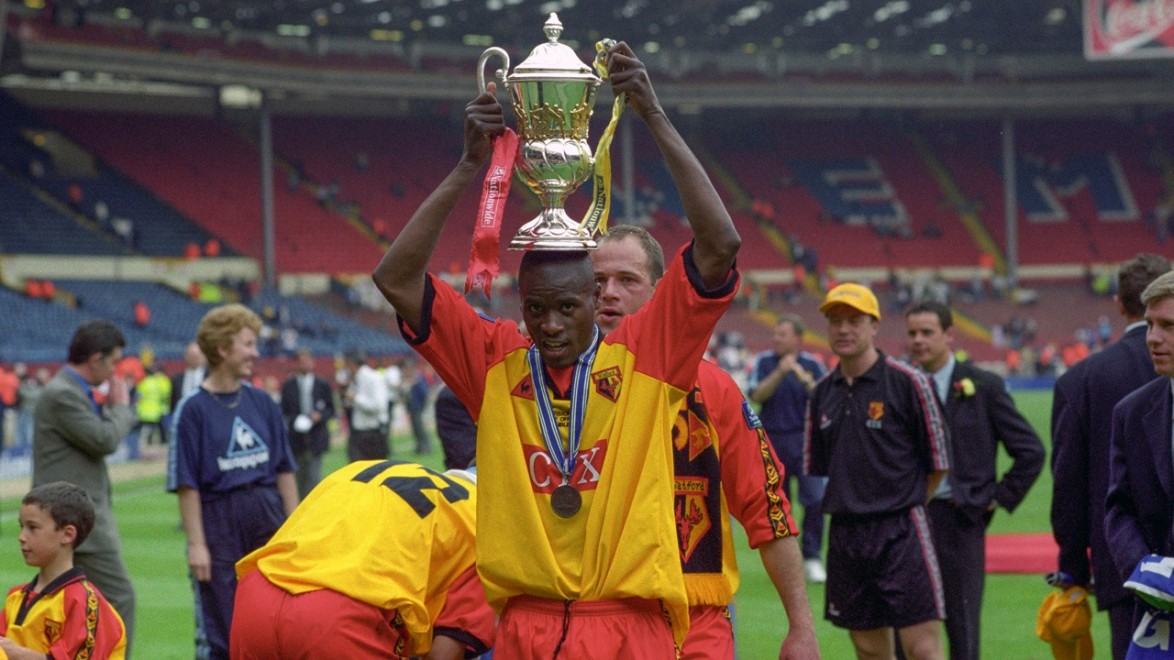 Ngonge didn't need to score against Bolton either. Smart and Nick Wright saw to that with two of the great Wembley goals. Ngonge had his then wife, his parents, his cousin and plenty of friends in the crowd. “Even the president of one of my former clubs in Belgium came,” he said. “He didn't tell me – he just bought a ticket. There were also two journalists from Belgium and they had a camera just on me. That made me really proud.”

Ngonge, 51, is now assistant coach of the Belgium Under-17 team. His son, Cyril, 18, is at Club Brugge and played in the Champions League this season. Life is good but even when it isn't sometimes, he has something in the memory bank to act as the perfect pick-me-up.

“If sometimes I feel down, I get the tape out of the final and watch the game,” he said. “Straight away the confidence comes through my mind. It was a really special day and I hope all footballers can experience something like that. This is why we play football: to get this kind of sensation. It's writing history.

“When I talk to the Under-17 players I talk to them a lot about what we did at Watford, how everybody is part of the team, not just the 11, not just the subs, but the players in the stands. When you do this, you are strong and you can do anything.”